Who Wrote The Constitution? The History Of The Surprisingly Messy Constitutional Convention

While James Madison has often been called the "Father of the Constitution," he wasn't the only one who wrote the famous document in 1787.

The easiest answer to the question of who wrote the Constitution is James Madison. After all, the Founding Father and future U.S. president famously drafted the document after the Constitutional Convention of 1787. But that, of course, oversimplifies things.

While Madison is recognized as the chief architect of the finished product, the U.S. Constitution was the result of nearly four months of arduous deliberation and compromise among dozens of delegates from 12 states.

What’s more, the ideas in the Constitution came from Madison’s careful study of other writers and philosophers from history. And though the Constitution was sent to states to ratify in September 1787, the document inspired several fierce debates, especially concerning the Bill of Rights.

Years later, the U.S. Constitution is now considered one of the world’s most famous “living documents.” But the path to completing it wasn’t an easy one — and the first draft looked quite different from the final version.

Why The Constitution Was Written 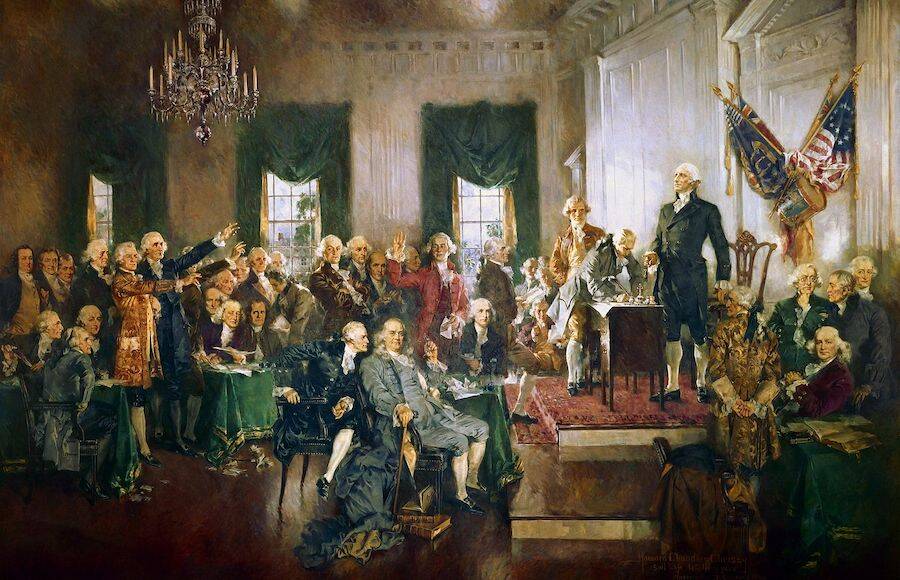 Wikimedia CommonsA depiction of the signing of the U.S. Constitution.

The Constitution was made necessary by the utter ineffectiveness of the Articles of Confederation as a governing document.

The Articles of Confederation had been drafted during the American Revolution, when rebelling colonists in the 13 American colonies declared their independence from what they felt was a tyrannical English government. It was no surprise that the Articles called for a particularly weak central government — one that was subordinated to the individual states.

Indeed, the Articles made the states de facto sovereign nations. And one of the many contentious aspects about the Articles — which came to a head at the Constitutional Convention — was the matter of representation.

Under the Articles, each state had one vote in Congress, regardless of its population size. This meant that Virginia and Delaware enjoyed equal representation in Congress despite the fact that Virginia’s population was then 12 times that of Delaware’s. Unsurprisingly, this caused tension.

In the six years prior to the Convention, the Articles had provided a laughably weak central government unable to perform the most basic of functions, such as imposing taxes, raising an army, adjudicating disputes between states, conducting foreign policy, and regulating commerce between states.

And by 1787, it was clear that something had to be done. Thus, delegates from 12 former colonies that had since become states gathered in Philadelphia that May. Rhode Island was the only one to boycott the event.

This decision infuriated the usually calm George Washington, who wrote this scathing response: “Rhode Island… still perseveres in that impolitic, unjust, and one might add without much impropriety scandalous conduct, which seems to have marked all her public councils of late.”

But even those who were interested in reforming the Articles had trouble agreeing on what the new document would include. Before long, the Constitutional Convention had devolved into a highly contentious affair that saw large states and small states jockeying for representation in Congress.

And while the delegates were supposed to simply revise the Articles of Confederation, they instead drew up an entirely new form of government.

Who Wrote The Constitution? James Madison Didn’t Do It Alone 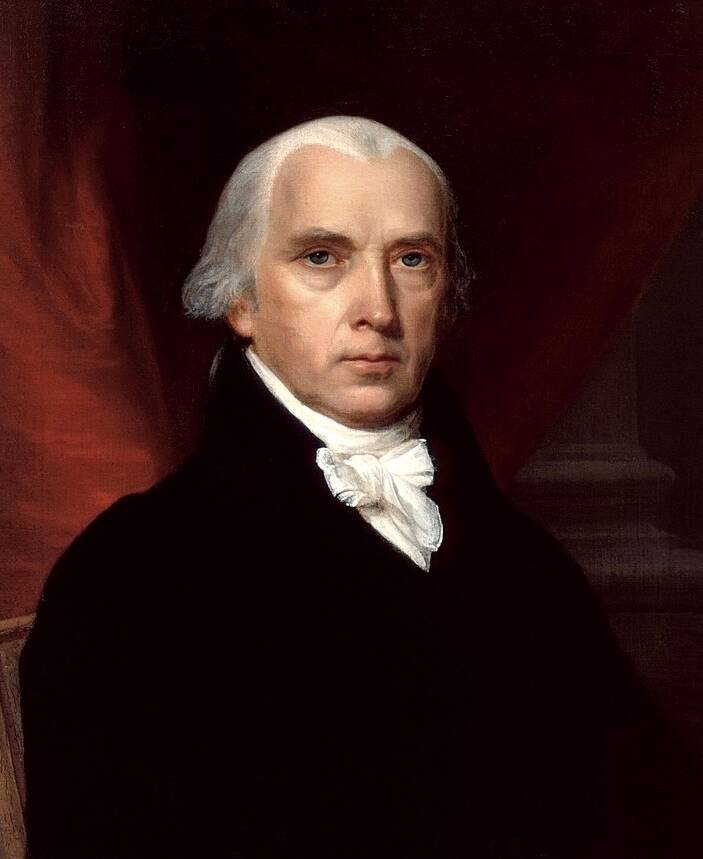 White House Historical AssociationJames Madison in an 1816 portrait. He later served as president of the government he helped create.

Though James Madison wrote the Constitution, he certainly wasn’t alone in hammering out the specific details of the document. For instance, Pennsylvania delegate Gouverneur Morris has been credited with writing most of the document’s final text, including the famous preamble.

In total, 55 delegates attended the Constitutional Convention, including Alexander Hamilton and Benjamin Franklin. George Washington also presided over the gathering, which lasted from May 27 to September 17, 1787. Though some delegates were more involved in creating the Constitution than others, they all played a role in developing the final product in the end.

(As for the man who literally handwrote the Constitution, he wasn’t a delegate at all — just an assistant clerk named Jacob Shallus who happened to have beautiful penmanship.)

Madison and most other delegates were educated and well-read individuals — and their ideas on government had been informed by other writers and philosophers, especially those from the Enlightenment era. John Locke (1632-1704) of England and Baron de Montesquieu (1689-1755) of France had a particularly great influence on the men who wrote the Constitution.

According to Locke, the chief function of government was to secure the rights of life, liberty, and property. He believed that the best government was one that was accountable to the people through the democratic election of representatives, who could be replaced if they failed at their duties.

Delegates were also influenced by the ideas of Montesquieu, a prominent Enlightenment thinker who stressed the importance of the separation of powers. In The Spirit of the Laws, he noted that the legislative, executive, and judicial functions of government should not reside in the same person or body. Instead, he argued that they should be dispersed over multiple branches of government to prevent one from becoming too powerful.

Those who wrote the Constitution admired these principles. And so they took these insights and set about applying them to their own unique problem of remedying the Articles of Confederation.

The Debates Surrounding The Constitution 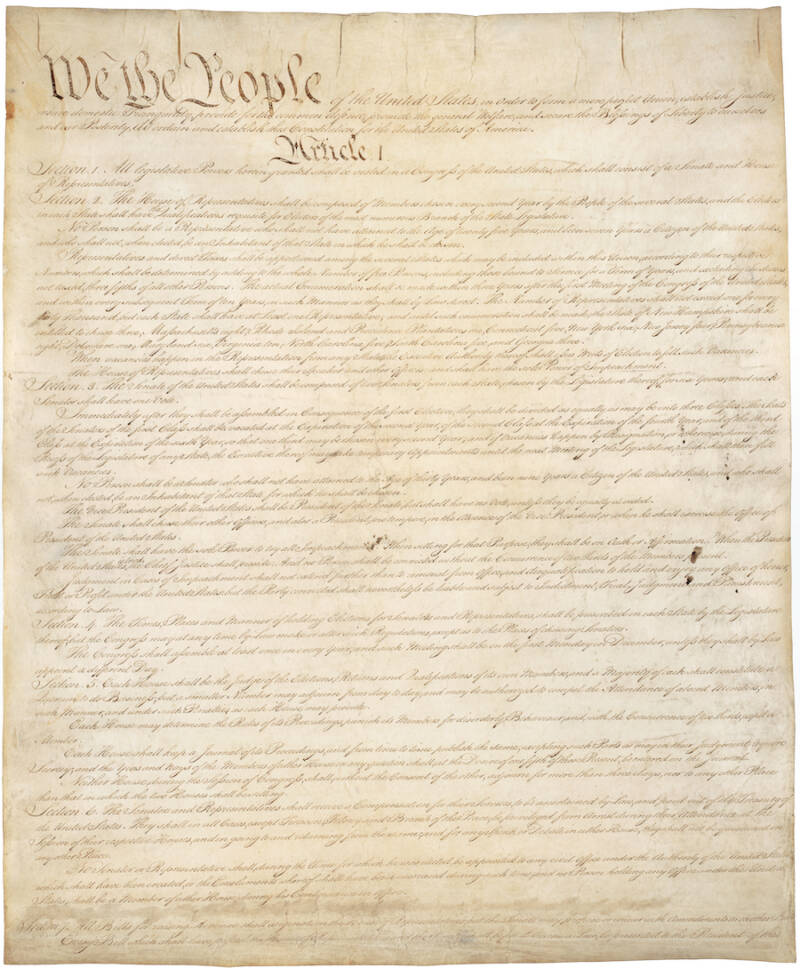 Though the Constitutional Convention was called under the pretense of merely revising the Articles of Confederation, the result was an entirely new document. And that document only had to be ratified by nine of the 13 states, instead of unanimously as was called for under the Articles.

But coming up with that document took time — and inspired several heated debates. From the content of the document to the writing style, it seemed that the delegates could rarely come to a complete consensus on anything in the Constitution. And as the delegates discussed their ideas for the document, one of the most contentious issues was representation.

The delegates eventually reached a compromise sketched out by Roger Sherman and Oliver Ellsworth of Connecticut. The principle of equal representation of the states would remain in the Senate (the upper chamber), while representation in the House of Representatives (the lower chamber) would be apportioned in accordance with states’ populations.

Controversially, the framers also agreed that the official count of the states’ populations would include enslaved people who lived there. But the framers did not count any of these men, women, or children as full people. Instead, they decided that each slave would count as three-fifths of a person.

The framers also decided that the House of Representatives would use direct election, whereby senators would be chosen by individual state legislatures. (This rule would remain in place until 1913.)

Then, they gave Congress the legislative tasks of making laws, imposing taxes, regulating interstate commerce, coining money, and so on. They tasked the president with the executive functions of signing or vetoing bills, conducting foreign policy, and serving as commander-in-chief of the armed forces. And they decided that the federal judiciary — the Supreme Court — would adjudicate disputes between the states and other parties.

But even though the framers sent out the Constitution for ratification in September 1787, their debates hadn’t ended quite yet. They still hadn’t resolved the question of whether the document needed a Bill of Rights.

Who Wrote The Bill Of Rights? 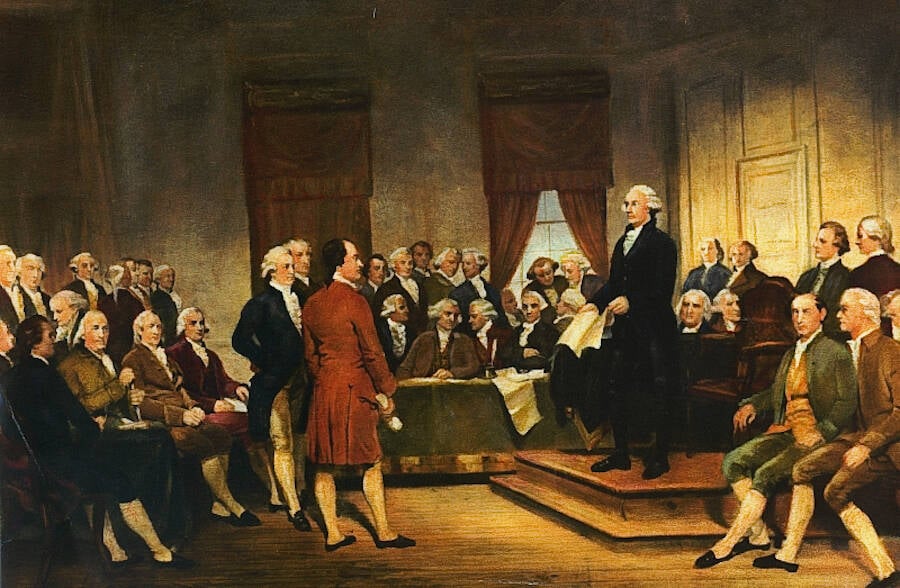 Wikimedia CommonsThe Constitution is often described as a “living document” because it can be amended, but there have been only 27 amendments added in over 230 years.

Ultimately, most of the delegates were able to come together to create the “supreme law of the land” — but some still felt it was woefully incomplete.

As the Constitution went from state to state over the next 10 months, the issue of the missing Bill of Rights came up again and again. Some states didn’t want to ratify the document without these amendments.

Though James Madison, who wrote the Constitution, didn’t think that the document needed a Bill of Rights, he changed his mind when Massachusetts threatened not to ratify. He agreed to add amendments to satisfy those who were hesitant — and the Constitution was soon adopted on June 21, 1788, when New Hampshire became the ninth state to ratify the document.

From there, Madison worked to draw up a Bill of Rights. He introduced a list of amendments to the Constitution on June 8, 1789, and “hounded his colleagues relentlessly” to make sure that all of them got approved.

The House passed a resolution with 17 amendments based on Madison’s suggestions. From there, the Senate narrowed the list down to 12. Ten of these — including freedom of speech and the right to bear arms — were eventually ratified by three-fourths of the states on December 15, 1791.

It’s little wonder why he’s often called the Father of the Constitution.

After learning about who wrote the Constitution, discover the complicated story behind the Declaration of Independence. Then, read some of the darkest facts about the Founding Fathers of the United States.