Who Wrote The Declaration Of Independence? Inside America’s Founding Document

While Thomas Jefferson was the main author of the Declaration of Independence, the congressional committee of John Adams, Ben Franklin, Roger Sherman, and Robert Livingston played an important role.

If you’ve ever wondered who wrote the Declaration of Independence, you’ll probably be surprised to learn that there wasn’t just one author. It may help to take a step back to a hot, humid day in June of 1776 when the document first began to take shape.

Thomas Jefferson, who at the time was one of the youngest delegates at the Second Constitutional Convention, sat in the rented parlor of a handsome brick building in Philadelphia. The 33-year-old from Virginia gathered his thoughts and brought quill pen to parchment. 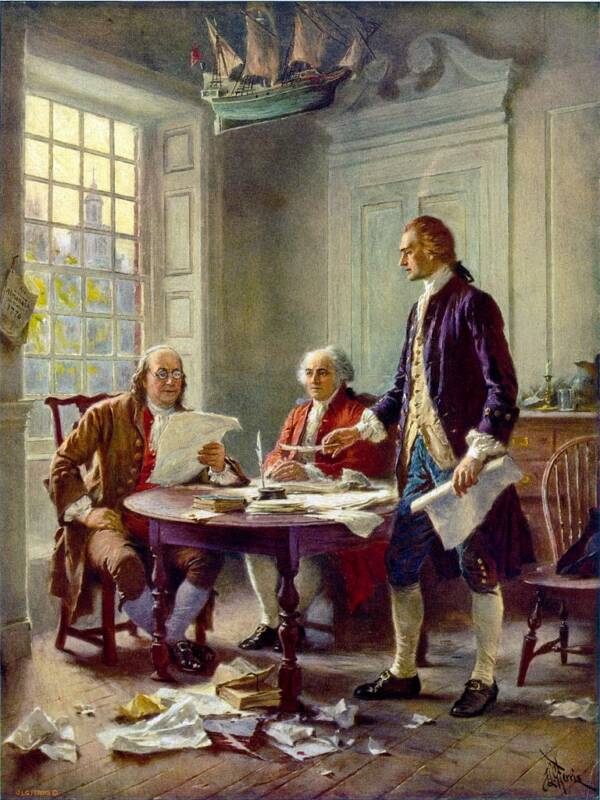 Library of CongressBenjamin Franklin, John Adams, and Thomas Jefferson review the first draft of the Declaration of Independence.

Jefferson’s writing was influenced by the debates of weeks past, and by his reading of philosophers like Thomas Paine and John Locke. As Jefferson wrote, his 14-year-old valet, a slave named Robert Hemings, stood nearby.

For more than a month, Jefferson had witnessed debates among the Second Continental Congress in the stuffy Pennsylvania State House. Jefferson, like all colonists, had lived through a turbulent decade. Relations with the British government had steadily deteriorated since the widely despised Stamp Act of 1765 that imposed a direct tax on the colonists.

Congress had tasked Jefferson and four other delegates — John Adams, Benjamin Franklin, Roger Sherman, and Robert Livingston, the so-called “Committee of Five” — to create a declaration of independence from Great Britain. The committee assigned the first draft to Jefferson. But Jefferson’s original draft would go on to have many edits before emerging as the historical catalyst known as the Declaration of Independence.

Why Was The Declaration Of Independence Written? 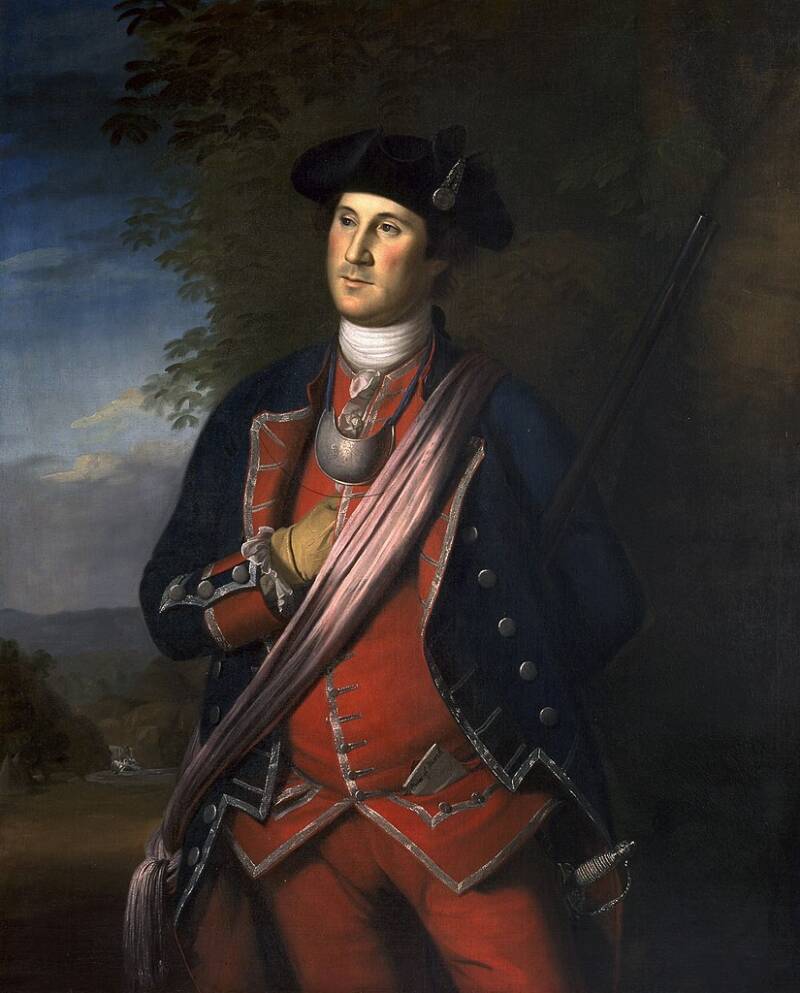 Wikimedia CommonsGeorge Washington served as a colonel in the French and Indian War in the 1750s.

By the time Jefferson sat down to pen his draft in 1776, a series of events had driven a wedge between Great Britain and its 13 colonies across the Atlantic.

The British had won the French and Indian War, which stretched from 1754 to 1763, but at great cost. Great Britain had spent lavishly on the conflict and had to borrow £58 million to pay for expenses, bringing the crown’s total debt to around £132 million.

Many had died. But others, like a young lieutenant colonel from Virginia named George Washington, had seen their status rise after the battle.

To pay for the conflict’s expenses, the British government needed to raise taxes on its colonists. The resulting Stamp Act levied a tax on all paper documents such as wills, newspapers, and playing cards. Colonists chafed under the new restrictions, but the British insisted such a tax was necessary. 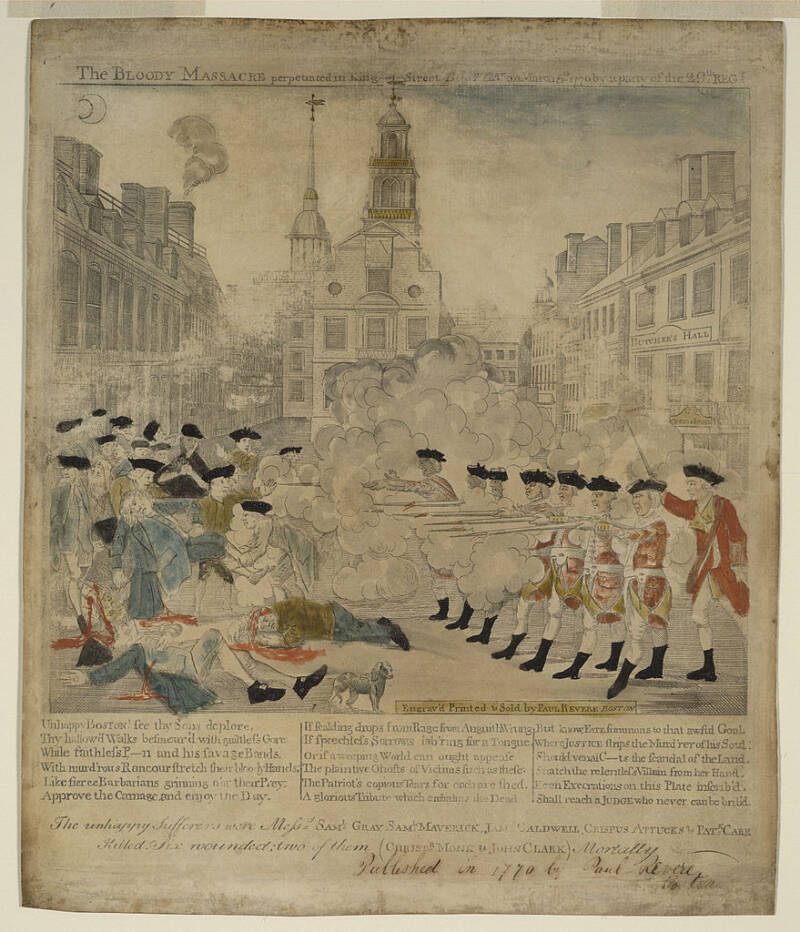 Library of CongressPaul Revere drew this picture of the Boston Massacre in 1770.

From there, relations continued to sour. In 1770, British troops in Boston opened fire on a crowd that had pelted them with snowballs, rocks, and shelled oysters, killing five. A Boston lawyer named John Adams agreed to defend the soldiers. (The defense would cost Adams many of his clients, but would elevate his public profile.)

Next came the famous Boston Tea Party of 1773, when angry American colonists dumped 342 chests of tea imported by the British East India Company into the Boston Harbor. Then, in April of 1775, a standoff between some 700 British troops and 77 militiamen in Lexington ignited, leaving eight militiamen dead.

The Revolutionary War had begun, and a month later, the Second Continental Congress would gather in Philadelphia for its first meeting.

The men who filled the chamber at the Pennsylvania State House hailed from all 13 colonies. They included members who had attended the First Continental Congress, like John Adams, and new delegates who hadn’t, like Thomas Jefferson and Benjamin Franklin. 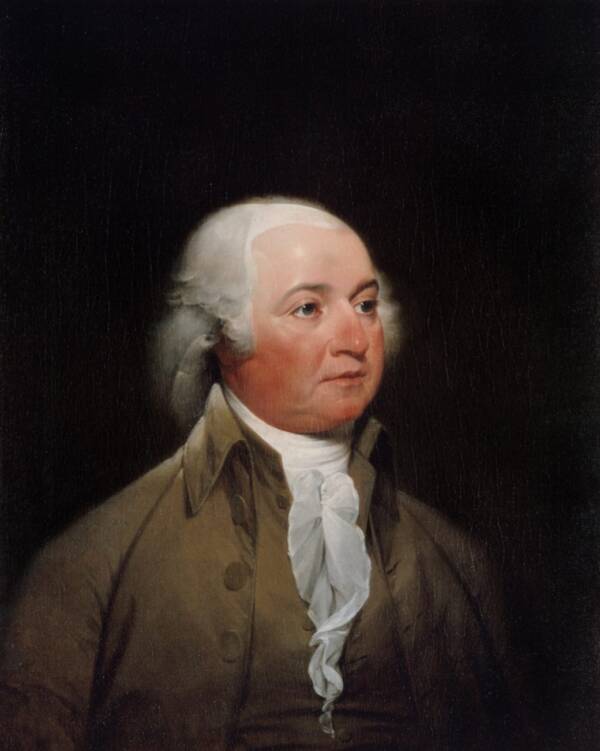 Wikimedia CommonsJohn Adams went from defending British soldiers after the Boston Massacre to serving as the vice president of the newly formed United States.

The Congress agreed that current relations with the British were unacceptable, but disagreed over how to proceed. John Adams, in a letter to his wife Abigail, noted that Congress split into three factions.

First, he wrote, there were those who wanted to convince the British to return to the conditions that pre-dated the Stamp Act. Meanwhile, a second faction believed that only the British king, not Parliament, could issue orders to the colonies.

A third group — Adams’ group — harbored a desire too radical to express publicly. He and others believed in complete independence from the British.

At first, the delegates attempted reconciliation. Much to Adams’ chagrin, Congress drew up the Olive Branch Petition to send directly to the king. It had little impact. King George III refused to see the petition and declared that the colonists were in “open and avowed rebellion” and “levying war” against the British. 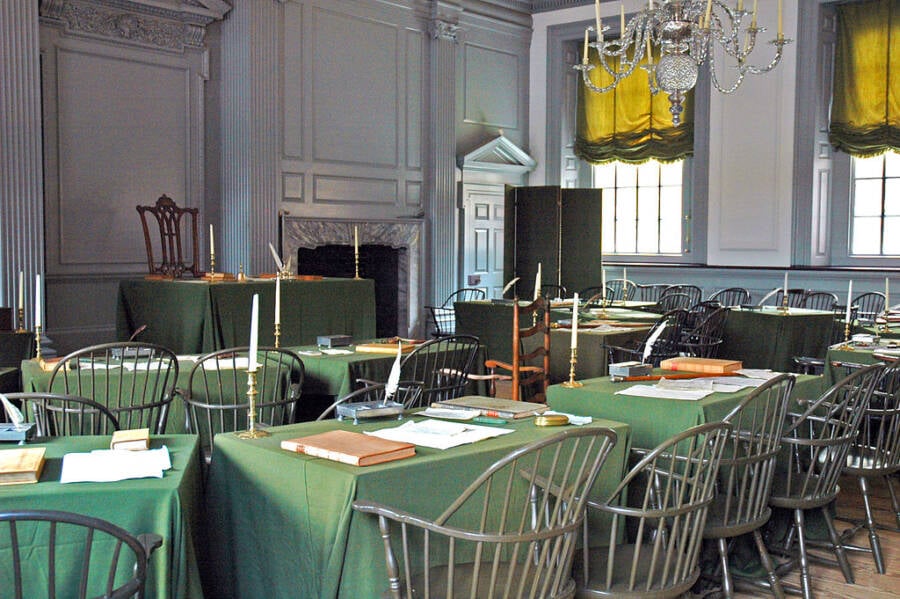 As the war ramped up, John Adams’ desire for national independence became more widespread. Thomas Paine’s Common Sense, published in January of 1776, urged the colonies to declare independence. By May, eight colonies supported independence as well.

On June 7, delegate Richard Henry Lee formally proposed independence. And by June 11, Congress selected the Committee of Five to write a formal declaration.

Who Wrote The Declaration Of Independence? 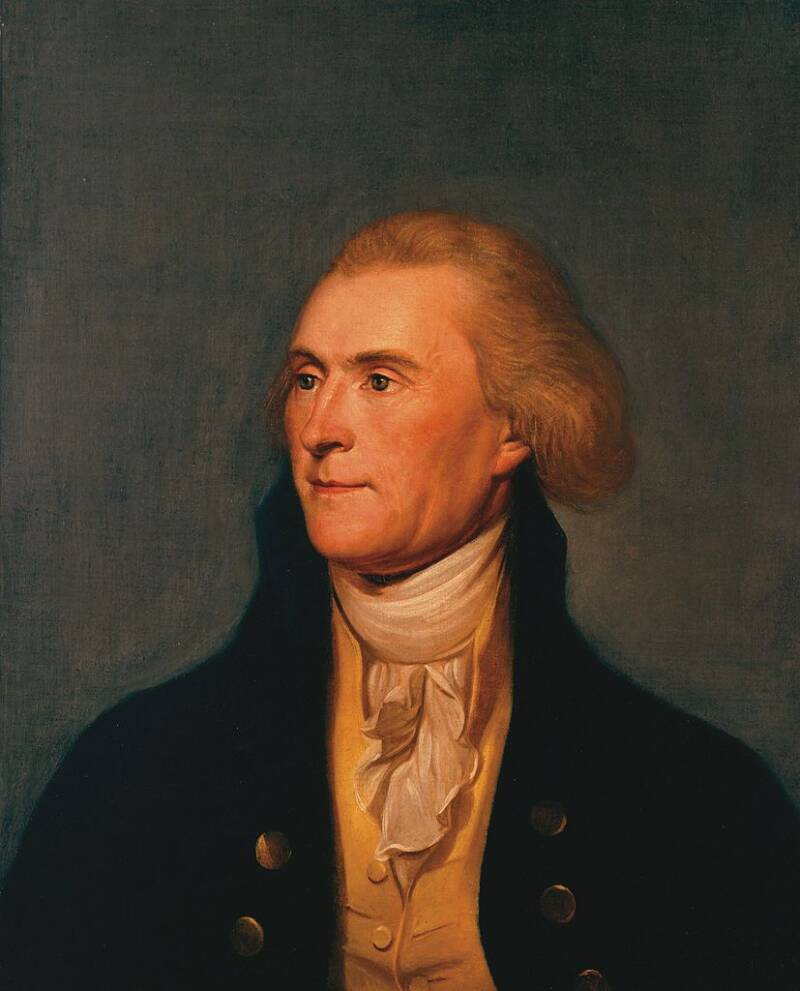 Wikimedia CommonsThomas Jefferson is the one who wrote the first draft of the Declaration of Independence.

To begin, the Committee of Five assigned Jefferson the task of writing a first draft that they could review. Nearly 50 years later, Jefferson would recall in a letter to his friend James Madison that the others “unanimously pressed on myself alone to undertake the draught. I consented; I drew it.”

According to John Adams, Jefferson was chosen in part because he had the fewest enemies in Congress. In his autobiography, Adams recalls that although he had “never heard [Jefferson] utter three sentences together…[he] had the reputation of a masterly Pen… I had a great opinion of the Elegance of his pen and none at all of my own.”

Adams insisted that he had been approached to write the first draft, but he believed any draft he produced would undergo more severe criticism than one from Jefferson. 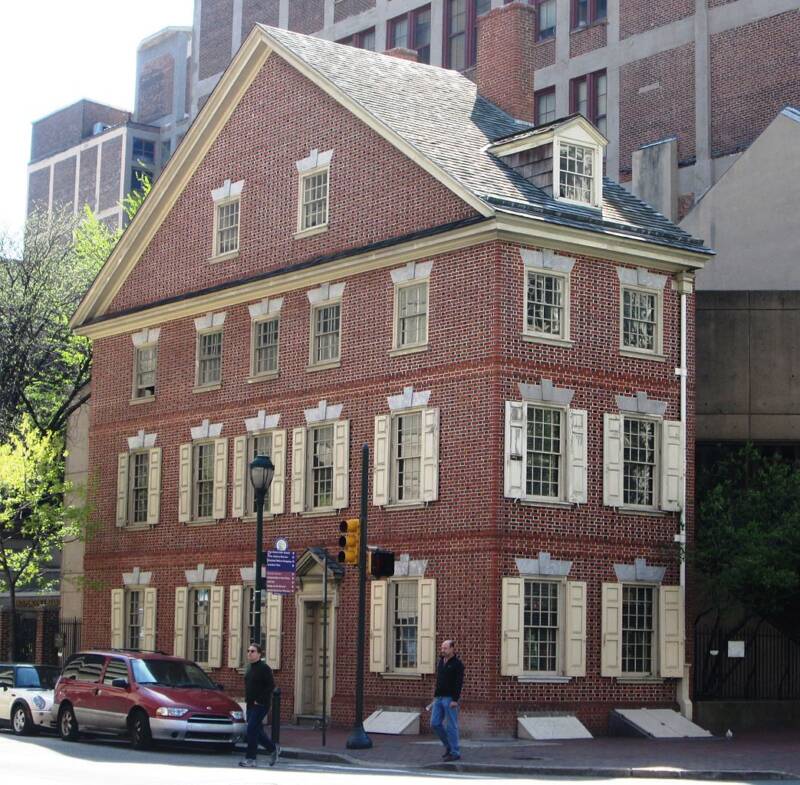 Wikimedia CommonsA reconstruction of the house where Jefferson worked on his draft.

Thomas Jefferson began to write in his rented parlor near the Pennsylvania State House. Two days later, he had produced a draft. Before submitting it to the full committee, Jefferson brought what he had written to Adams and Franklin “because they were the two members of whose judgments and amendments I wished most to have the benefit before presenting it to the Committee.”

Who Was The Main Author Of The Declaration Of Independence?

Knowing that multiple men worked on the document, it’s natural to ask: who was the primary author of the Declaration of Independence?

It’s a simple question with a complicated answer. Thomas Jefferson wrote the original draft of the Declaration of Independence. He edited his own work, then shared a “clean” draft of his work with John Adams and Benjamin Franklin. Next, the document went to the Committee of Five. And, finally, the committee shared it with Congress.

Adams, Franklin, and the other members of the Committee of Five made 47 changes, including the addition of three paragraphs. They presented the document to Congress on June 28, 1776.

Congress reviewed the document over several days. Even after the body officially voted for independence on July 2, it continued to tweak Jefferson’s draft, making an additional 39 revisions.

Jefferson later recalled that, “during the debate I was sitting by Dr. Franklin, and he observed that I was writhing a little under the acrimonious criticisms on some of its parts.” 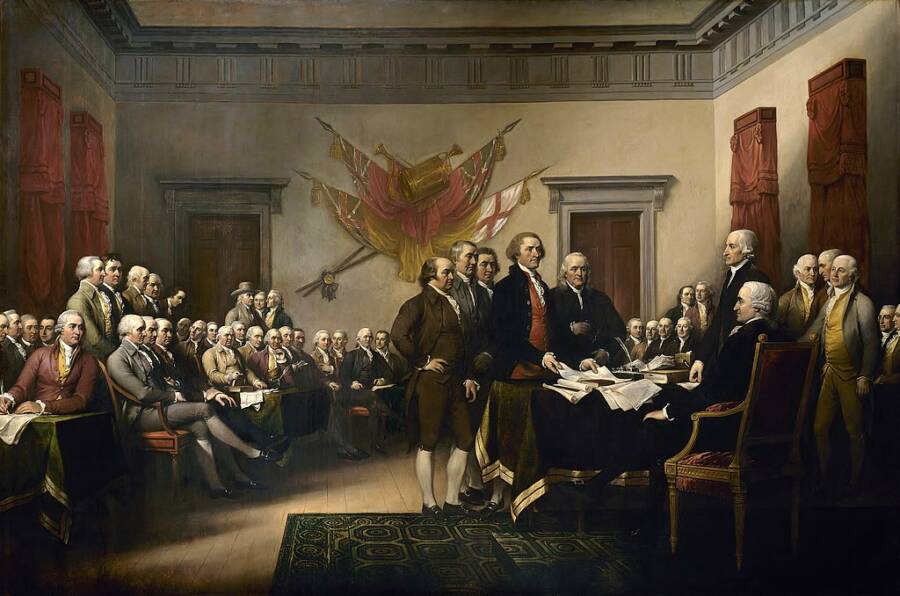 Wikimedia CommonsThe Committee of Five presents a draft of the Declaration of Independence to the Second Continental Congress.

By the end of the debate, Congress had significantly altered Jefferson’s original document. What was changed?

In one passage, Jefferson attacked George III for his support of slavery — a hypocritical charge, coming from a man who owned hundreds of slaves himself. In his draft, Jefferson wrote:

“[The king] has waged cruel war against human nature itself, violating its most sacred rights of life and liberty in the persons of a distant people who never offended him, captivating and carrying them into slavery in another hemisphere or to incur miserable death in their transportation thither.”

Roughly a third of the delegates at the Continental Congress, like Jefferson, owned slaves. Many more profited from the slave trade. They insisted on striking the passage.

Jefferson also attacked the king for offering the enslaved freedom if they rose up against the colonists on his behalf. In subsequent drafts, this proclamation was altered to simply state that the king “has excited domestic Insurrections against us.”

Signing The Declaration And Its Legacy In American History 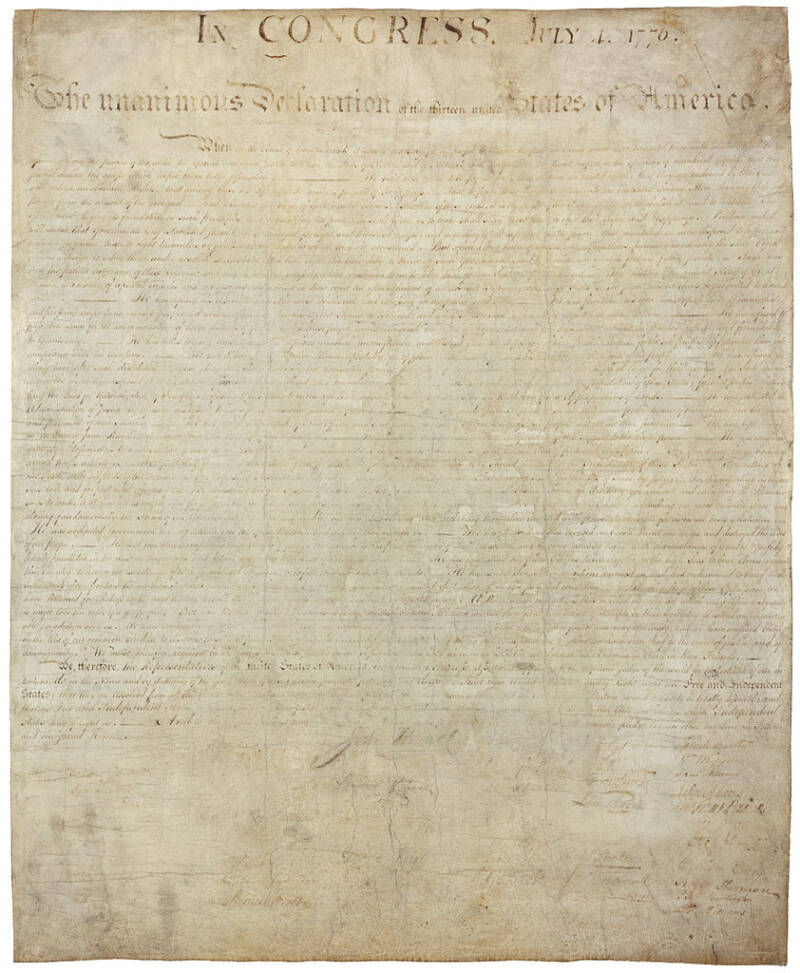 National ArchivesThe Declaration of Independence was engrossed on parchment made from animal skin.

On July 4, Congress officially adopted the Declaration of Independence. As the delegates signed the document, Benjamin Franklin quipped, “We must, indeed, all hang together, or most assuredly we shall all hang separately.”

In striking out on their own, Congress was committing treason against the king. Even so, it was an occasion for celebration — although many of the delegates believed July 2, not July 4, should be marked as a future Independence Day.

Adams wrote to his wife, Abigail:

“The Second Day of July 1776, will be the most memorable Epocha, in the History of America. I am apt to believe that it will be celebrated, by succeeding Generations, as the great anniversary Festival.”

In the coming years, both Jefferson and Adams would take on the responsibilities of vice president and president of their new country.

Thomas Jefferson’s election in 1800 was heralded as the “Revolution of 1800” because it realigned American politics, ending the tenure of Federalist presidents like George Washington and Adams, and setting the stage for a generation of politicians who hemmed to Jefferson’s small-government way of thinking.

To Jefferson’s followers, it was politically advantageous to emphasize Jefferson’s sole authorship of the Declaration of Independence. However, Jefferson did not acknowledge his dominant role in producing the document until the end of his life.

The friendship between Jefferson and Adams deteriorated as their political fortunes grew — but the two men reconciled after they both left office. They opened an epistolary correspondence in 1812, which would continue for the next 14 years.

After reading about who wrote the Declaration of Independence, check out 33 of Benjamin Franklin’s best quips and the story of who wrote “The Star-Spangled Banner.”