On December 11, 1964, R&B legend Sam Cooke was shot to death by a hotel manager named Bertha Franklin. It was ruled self-defense, but was that really the case?

On December 11, 1964, singer Sam Cooke burst into the main office of the Hacienda Motel in El Segundo outside Los Angeles. He was in nothing but a jacket and one shoe.

At least, that is the story that Bertha Franklin later told the LAPD. The shooting was ruled a “justifiable homicide.” 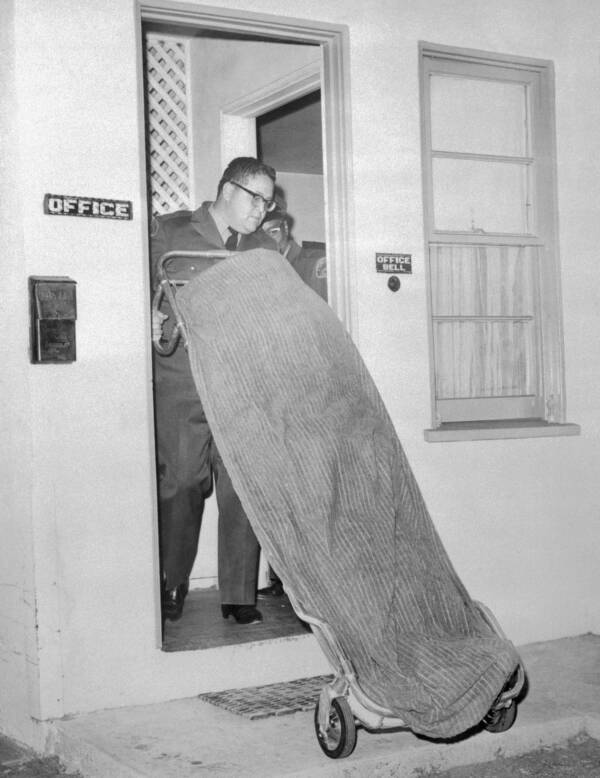 Getty ImagesCooke’s body is removed from the office of the motel. He was reportedly wearing just a top coat and one shoe.

But as those closest to him learned more about Sam Cooke’s death, they questioned the official report. Even decades later, some refuse to accept the official story.

What really happened that December night at the Hacienda Motel?

Who Was Sam Cooke?

Sam Cooke began his musical career as a gospel singer. He was, after all, the son of a Baptist minister.

Young Cooke craved an audience. His brother, L.C., recalled Cooke lining up popsicle sticks and saying to him, “This is my audience, see? I’m gonna sing to these sticks.”

He was just seven years old at the time when he voiced his life’s ambition, “I’m gonna sing, and I’m going to make me a lot of money.”

As a teenager, Cooke joined a gospel group called the Soul Stirrers and they signed onto the label Specialty Records. Cooke made an impression with this label and by his mid-20s, had earned the moniker King of Soul. 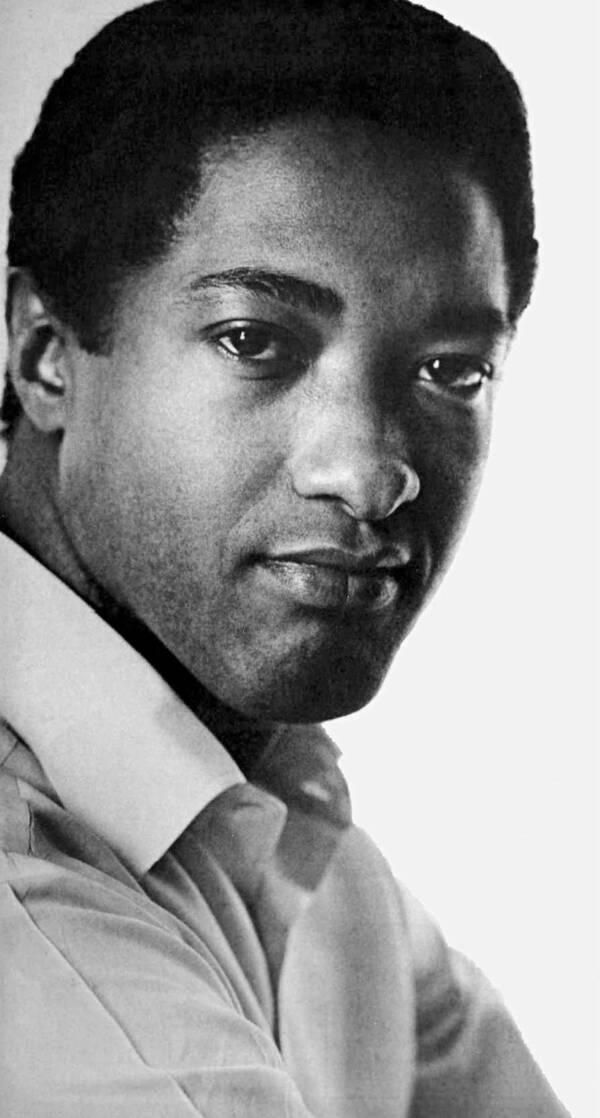 RCA Victor Records/Wikimedia CommonsSam Cooke is largely regarded as the king of soul and R&B.

By 1964, the year Sam Cooke died, the singer had founded his own record label and publishing company. And just as he’d promised his brother, Cooke had become a successful, influential musician.

What Happened The Night Leading Up To Sam Cooke’s Death

On December 10, 1964, Sam Cooke spent the evening in Martoni’s Italian restaurant, a Hollywood hot spot. Cooke was a 33-year-old star with a new hit album and he was instantly recognizable to many at the restaurant.

That evening, Cooke wandered away from dinner with his producer to visit the bar where he bought drinks for friends in the music business, apparently flashing thousands in cash.

While chatting, Cooke caught the eye of 22-year-old Elisa Boyer. A few hours later, the pair hopped into Cooke’s red Ferrari and headed down toward El Segundo.

Cooke and Boyer ended up at the Hacienda Motel around 2 AM. Known for its $3-an-hour rates, the motel catered to short-term visitors.

At the desk, Cooke asked for a room under his own name. Seeing Boyer in the car, the motel manager, Bertha Franklin, told the singer he’d need to sign in as Mr. and Mrs.

Within the hour, Sam Cooke was dead.

How Did Sam Cooke Die At The Hacienda Motel?

According to Elisa Boyer, Sam Cooke forced her into their room at the Hacienda Motel. She reportedly asked the singer to take her home, instead, he rented the room and pinned her to the bed.

“I knew he was going to rape me,” Boyer told police.

In the motel room, Boyer tried to escape through the bathroom but found the window painted shut. When she left the bathroom, Boyer found Cooke undressed on the bed. She waited until he went to the bathroom and then, wearing just her slip, Boyer grabbed a pile of clothes and fled.

A block away, Boyer pulled on her clothes, abandoning Cooke’s shirt and pants on the ground. When Sam Cooke left the bathroom he found his clothes gone. Wearing a sports jacket and a single shoe, Cooke pounded on the door of the motel office where Bertha Franklin worked. 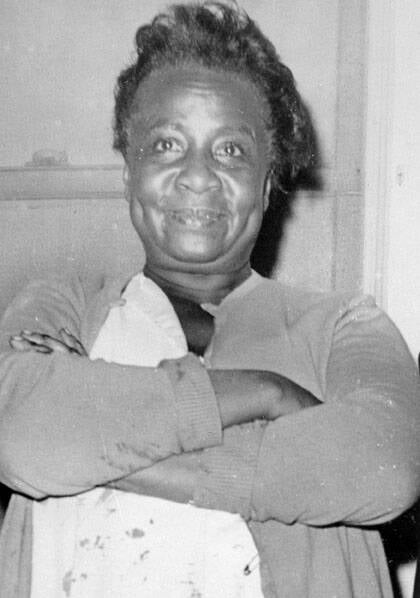 Bettmann/CORBISMrs. Bertha Franklin claimed that she had been warned previously on the telephone by another motel resident that there was a prowler on the premises.

“Is the girl in there?” Cooke yelled.

Bertha Franklin later told police that Cooke rammed down the door and charged into the office. “Where is the girl?” Cooke demanded as he grabbed Franklin by the wrist.

As the singer demanded answers, Franklin tried to push him away, even kicked him. Then, Franklin grabbed a pistol. “I shot… at close range… three times,” Franklin told police.

The first two shots missed. But the third bullet hit the singer in the chest. He fell back, exclaiming, “Lady, you shot me.”

Those were Sam Cooke’s last words.

When police arrived at the scene of the shooting, they found the singer dead. Within a week of Sam Cooke’s death, the police declared the shooting a “justifiable homicide.” Both Elisa Boyer and Bertha Franklin both spoke at the coroner’s inquest where Cooke’s lawyer was reportedly only allowed to ask a single question.

The evidence showed that Cooke’s blood-alcohol level was 0.16. His credit cards were gone, but he had over $100 in cash in his sports jacket, leading the police to conclude that Cooke hadn’t faced a robbery attempt.

To the police, it was an open and shut case, but Cooke’s friends and supporters wondered if there was more to the story. 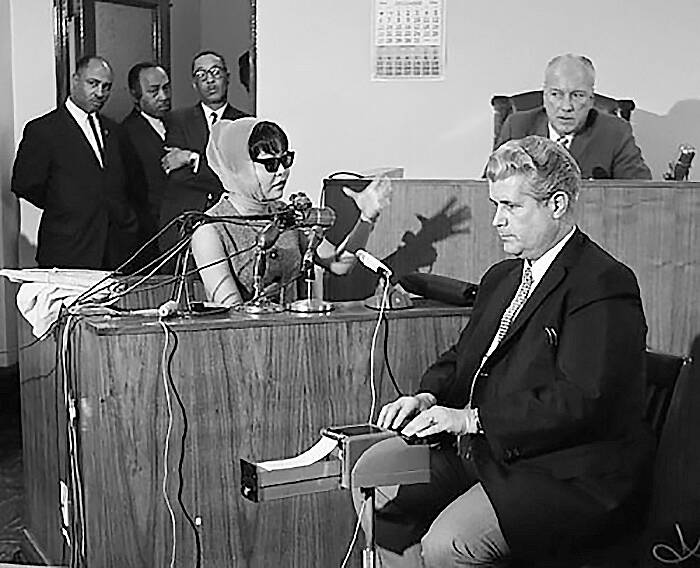 Getty ImagesElisa Boyer testifies in disguise during the coroner’s inquest on how Sam Cooke died.

At Cooke’s open-casket funeral, friends like Etta James and Muhammad Ali were shocked to find Cooke’s body badly beaten. James didn’t see how motel manager Franklin could have caused such injuries that seemed absent from Sam Cooke’s cause of death.

“His head was nearly separated from his shoulders,” James wrote. “His hands were broken and crushed, and his nose mangled.”

A month later, police arrested Elisa Boyer for prostitution. In 1979, she was found guilty of the second-degree murder of her ex-boyfriend. Based on this record, some posit that Boyer had attempted to rob Cooke and it went horribly awry.

Another theory suggested that Sam Cooke’s death was planned and staged by his enemies. By the 1960s, Cooke had become a prominent voice in the civil rights movement and frequently ruffled the feathers of bigots when he refused to perform at segregated venues. 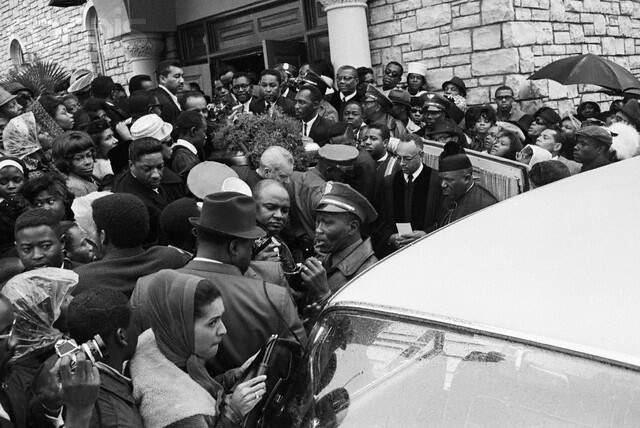 Sam Cooke’s obituary in The New York Times even noted his 1963 arrest for trying to register at a “whites only” motel in Louisiana.

As one of Cooke’s friends declared, “He was just getting too big for his britches for a suntanned man.”

Meanwhile, in Chicago and Los Angeles, 200,000 fans lined the streets to mourn Sam Cooke’s death. Ray Charles performed at his funeral and his posthumous hit “A Change is Gonna Come” became the anthem of the civil rights movement.

After reading about the controversial circumstances surrounding Sam Cooke’s death, check out more strange deaths of other famous people. Then, remember the 1960s in these powerful photos of the civil rights movement.