The Heroic Story Of Scott Davidson, Pete Davidson’s Dad Who Died On 9/11

Scott Davidson was more than just the father of “SNL” star Pete Davidson. He was a teacher, a coach, a husband, and one of the most courageous firefighters of Ladder 118. 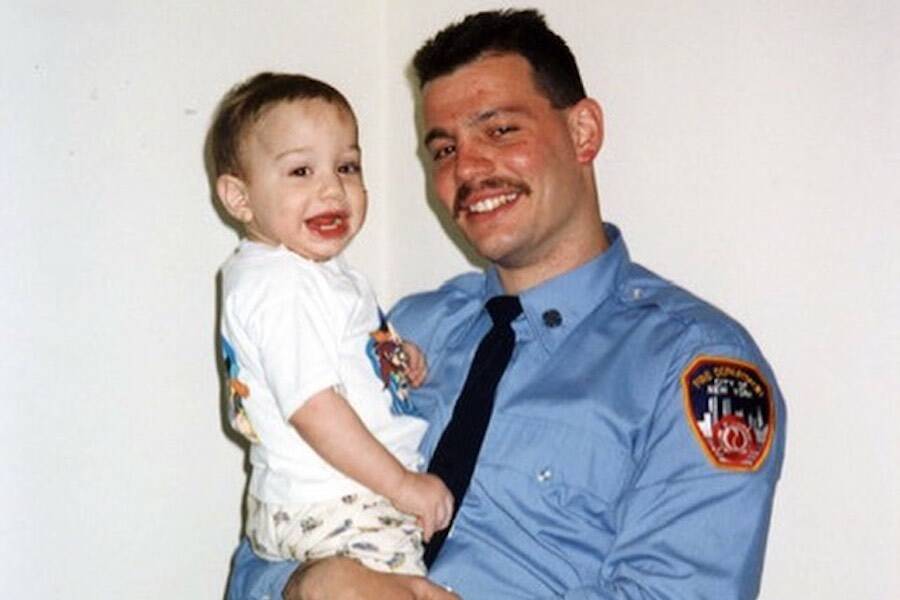 Most people only know Scott Davidson as Pete Davidson’s dad or the New York City firefighter who died on 9/11. However, if the lives he touched are any indication, he was far more than that. From bartender to coach and substitute teacher, he never stopped serving others — and died buried under 1.8 million tons of rubble.

Scott was last seen helping evacuate people from the Marriott hotel just before the North Tower collapsed onto it.

Pete Davidson was only seven when the September 11 attacks in lower Manhattan killed his dad. He would navigate that trauma for decades to come and tattoo his father’s badge number on his arm. A famous face on Saturday Night Live, the actor honorably memorialized his father with The King Of Staten Island in 2020.

How Pete Davidson’s Dad Lived To Help Others

Scott Matthew Davidson was born on Jan. 4, 1968, in Brooklyn, New York. His family moved to Staten Island when he was two years old. Raised by Steven and Carla Davidson, Scott and his brother, Michael, roamed around the borough like two bandits who found a bag of gold. For Scott Davidson, nothing was more fun than sports.

He showed athletic prowess early on. In elementary school, he was an all-star baseball player in the Great Kills Little League. Scott Davidson played four years of basketball at St. Joseph By-The-Sea High School and would be named Most Valuable Player in the Jacques Classic All-Star High School game in 1986.

While he pursued a bachelor’s degree in history at the College of Staten Island (CSI), he never abandoned his passionate love of sports. A CSI Dolphins player, Davidson graduated as captain of the basketball team in 1990 — after winning the Melvin Barmel Memorial Award and being named CSI’s Male Athlete of the Year. 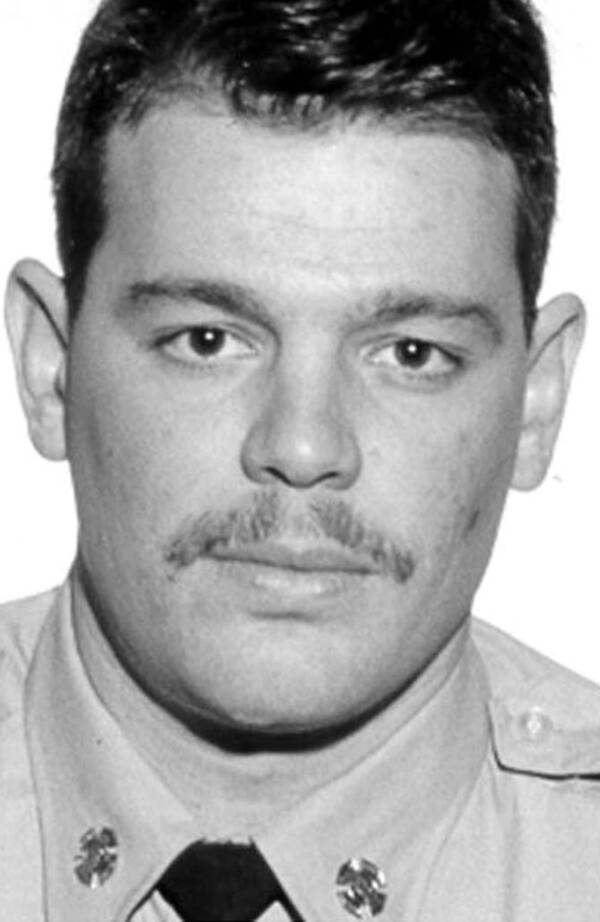 “I coached him in the Big Apple games when he was still in high school,” recalled CSI Dolphins coach Tony Petosa. “He and Tim Reardon, all they’d do is dive for loose balls… they’d bang heads going for it.”

After graduating, Davidson got a teacher’s license to work as a substitute, but he was determined to become a firefighter. He called it the “greatest job in America” and kept it at the forefront of his mind while enrolled at graduate school for teaching.

He was working as a bartender at the Armory Inn in Westerleigh when his wife, Amy, gave birth to a son on Nov. 16, 1993. Four months later, he passed the firefighter’s exam and joined the New York City Fire Department.

“Scott was a true team player,” said Steven Davidson, Scott’s father. “He was fearless and known for his defensive play. He always went the extra mile. He has passed on his inherent love of all sports to them. Peter has been active in football, baseball and basketball and Casey already shows athletic promise.”

When he wasn’t coaching freshman basketball teams at places like Moore Catholic High School, Scott Davidson was busy playing in the North Shore Softball League. He grew into an experienced firefighter stationed at Ladder Company 118 in Brooklyn Heights.

But Davidson also kept his teaching license active and spent much of his time as a substitute teacher in Brooklyn. He even kept tending bar during those last days and spent the rest of his waking hours with his son Pete and daughter Casey, born in 1997. 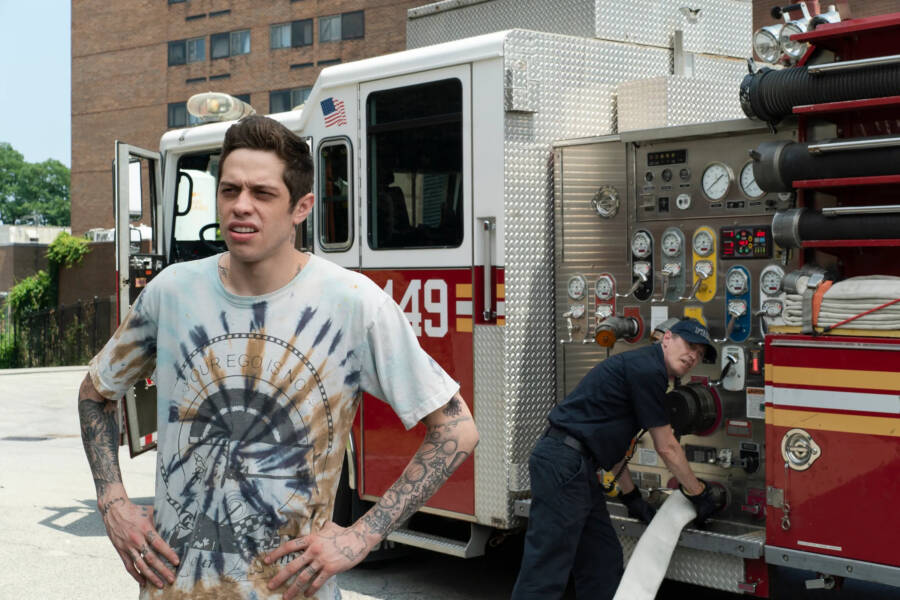 Apatow ProductionsPete Davidson in The King Of Staten Island.

Then, at 8:46 a.m. on Sept. 11, 2001, Davidson was on shift with Ladder 118 when the first plane flew into the North Tower of the World Trade Center. And shortly after 9:03 a.m., when the second plane hit the South Tower, the company got the call to come to the scene.

And as they raced across the Brooklyn Bridge, a photographer on a nearby rooftop captured their fire truck on what would ultimately be a fatal assignment. All six men in the truck died that day, and “The Last Run of Ladder 118” was published on the front page of The Daily News.

“When they arrived on the scene, they parked their rig at West and Vesey Streets, then vanished into the thick, cloudy smoke and soot,” recalled Scott’s father Steven.

As soon as the truck was parked, the men, including Scott Davidson, were told to help evacuate the Marriott World Trade Center, a hotel wedged between the North and South Towers. By the time the North Tower collapsed onto the hotel at 10:28 a.m., they had saved the lives of some 200 people who would have been trapped in its rubble.

The whole world was in mourning in the wake of 9/11, but none in deeper grief than those who had lost loved ones in the attacks. Pete Davidson later said he was glad that his father died when he was young, as didn’t fully understand things.

He would pull his hair out to purposefully go bald and struggled with suicidal ideation as a teenager, but also began doing stand-up comedy to cope with the pain and soon made a name for himself. Helping his mother, who worked as a school nurse, pay the bills, Pete Davidson became a Saturday Night Live cast member in 2014.

Perhaps most touching, Pete Davidson made his debut as a leading man in a film he dedicated to his father. While The King of Staten Island fictionalized much of Scott Davidson’s story, it’s a testament to what his 33-year-old hero meant to him.

After learning about Scott Davidson, look through these 55 photographs from 9/11 that reveal the tragedy of America’s darkest day. Then, read about Henryk Siwiak, the last person killed on 9/11.