Written sometime between 200 B.C. and 100 A.D., the Seikilos epitaph is the oldest complete musical composition in existence — hear it for yourself. 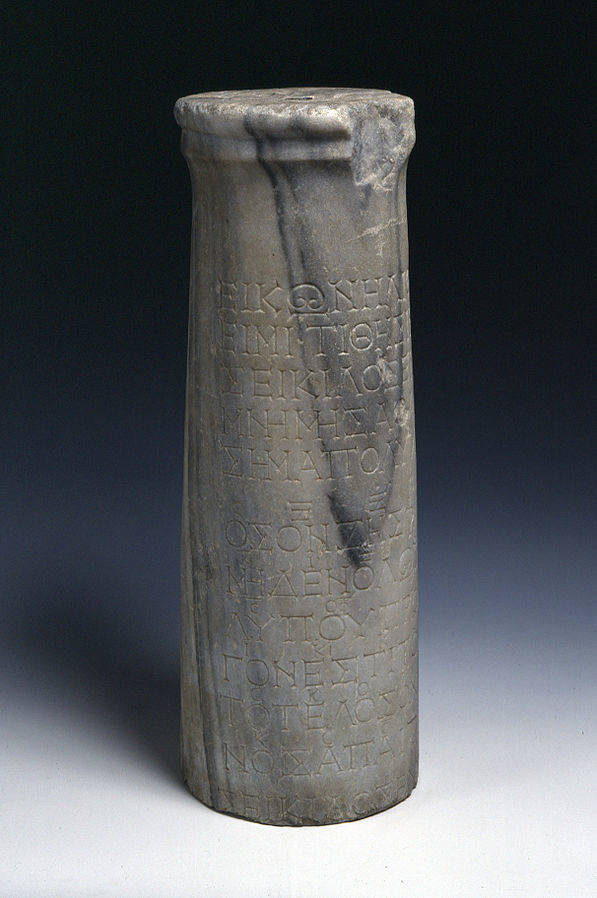 Wikimedia CommonsThe marble stele on which the Seikilos epitaph was first found.

It’s all but impossible to know just how long music has been around, since humans only started writing music down around the 14th century B.C. Archaeologists have discovered fragments of an ancient Sumerian hymn dating back to that period in the Syrian city of Ugarit.

But the Seikilos epitaph, which could date as far back as 200 B.C., is the world’s oldest surviving piece of musical composition that has been found in its entirety. And because this piece exists in its entirety, scholars have not only been able to translate the lyrics but have also been able to convert the piece into modern musical notation that can be played today.

A modern, amateur arrangement the Seikilos epitaph for piano.

Researchers have few clues about the creation of the Seikilos epitaph. What they do know is that the inscription on the stele may translate as “Seikilos to Euterpe.” Historians believe the composer, a man named Seikilos, wrote the song for a woman named Euterpe, presumably his deceased wife, and placed it on this tombstone for her.

However, another possible interpretation of the text could be “Seikilos, son of Euterpe [or Euterpos],” so it is possible the song was actually dedicated to his mother.

The full lyrics don’t clarify things definitively one way or the other:

“As long as you live, shine,
Let nothing grieve you beyond measure.
For your life is short,
and time will claim its toll.”

In addition to the lyrics, another piece of the puzzle is the inscription engraved on the stele that reads, “I am a tombstone, an image. Seikilos placed me here as an everlasting sign of deathless remembrance.”

There is thus no doubt that the composition is a type of mourning song, engraved on a loved one’s tombstone as a reminder of the fleeting nature of life. Much of the rest when it comes to the Seikilos epitaph, however, remains unclear.

By examining the letters and accents, researchers were ultimately able to transcribe the piece into contemporary musical notation.

Thus, people today can hear the Seikilos epitaph, a piece of music composed some 2,000 years ago.

The Seikilos epitaph was discovered near modern-day Aydın, Turkey in 1883 by Scottish archaeologist W. M. Ramsay, carved into a marble tombstone known as a stele.

That much is generally agreed upon, but most of the rest of the stele’s early history is mired in fuzzy information and conflicting accounts.

Some say that Ramsay brought the tablet to a museum in Smyrna, Greece, where it was kept safe until the Turkish War of Independence with the Greeks in 1919. During the war, the story goes that the Dutch Consulate in Turkey (why the Dutch Consul remains unclear) spirited the stele out of the country for safekeeping.

Running alongside this story is another account that also claims that Ramsay only found the stele by accident at the residence of railroad worker Edward Purser, who’d come across it while building the Smyrna-Aidin railway. Not realizing what he’d found, Purser reportedly somehow managed to saw off part of the bottom (irreversibly damaging the last line of the inscription) and give the stele as a gift to his wife, who placed it in her garden presumably as a decorative object. 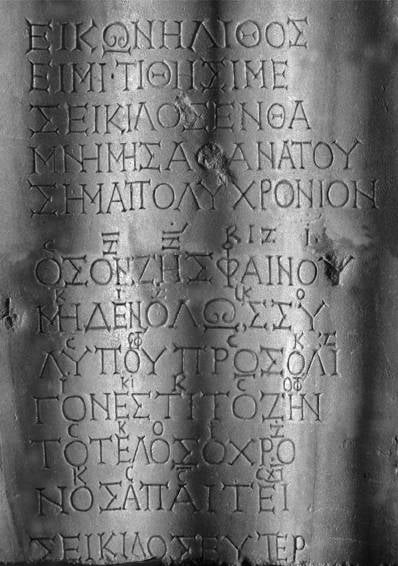 Wikimedia CommonsA close-up of the Seikilos epitaph notation on the stele.

Whether or not that version of events is completely true, it’s generally agreed that the unidentified man at the Dutch Consulate who’d gotten the stele out of Greece during the war then gave it to his son-in-law, who took it to The Hague, Netherlands.

It appears to have stayed there safely until the National Museum of Denmark purchased it in 1966 and brought it to Copenhagen, where it remains to this day.