Colorado Woman Spends $10,000 To Save Her Beloved Pet Chicken’s Life

"I told my husband, 'If Blue doesn't make it, you might as well dig a hole big enough to put both of us in.' I just don't know if I can handle life without her." 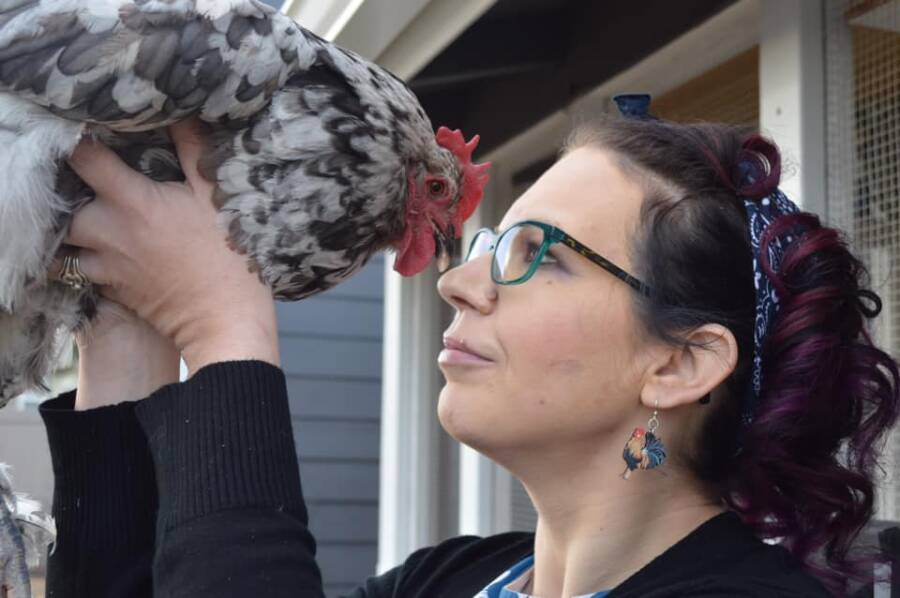 FacebookSeleta Nothnagel first bought Blue at a local store for $12, but now it’s taken $10,000 worth of medical expenses to save its life.

Sometimes, a person’s love for their pet can overcome any obstacle or financial hurdle. For Seleta Nothnagel of Colorado, her two-year-old chicken named Blue is invaluable. She not only feeds it human food, but she lets it sleep by her side. Now, she’s spent $10,000 on heart surgery and other procedures in order to save its life.

According to Yahoo, Nothnagel fell head over heels when she spotted Blue at a local feed store and bought it for $12. From that day forward, her love for the bird has never wavered. Unlike other chicken owners, she treats the animal with the tender care usually reserved for human beings.

Nothnagel routinely dresses Blue up in a heart-embroidered dress and matching diaper. She and Blue go on outings to stores like Joann Fabric and Home Depot together. Nothnagel even feeds Blue foods like strawberries, cheese, watermelon — and Pop-Tart crusts.

“She’s awesome,” Nothnagel said. “She really enjoys being held. She would just lay in my lap and close her eyes and start purring — and just kinda melt.”

FacebookNothnagel has said that she coudn’t handle life without her beloved Blue.

“She couldn’t breathe,” Nothnagel recalled. “It was scary.”

According to People, Nothnagel’s experience as a former veterinary tech made her fear the worst. She thus paid for X-rays, blood tests, ultrasounds, and echocardiograms in order to figure out what was wrong. 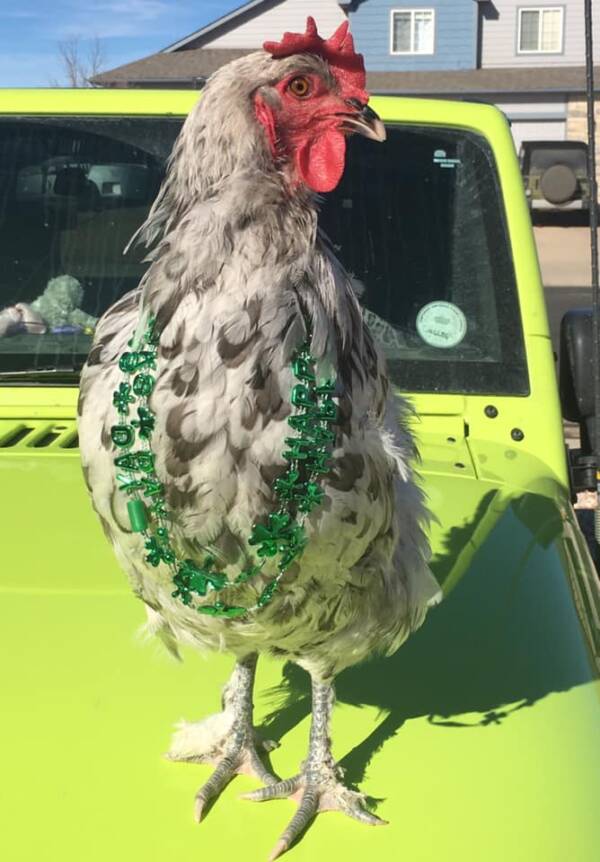 FacebookBlue survived her surgery and is now back to being a healthy and happy chicken.

Ultimately, tests performed in October confirmed that Blue had a congenital heart defect. The chicken was suffering from patent ductus arterious, which highly impedes heart development and the health of surrounding blood vessels.

The veterinary specialists also found that two major blood vessels leading to the animal’s heart had never properly closed. In all, Blue would need highly expensive surgery in order to survive.

Blue’s maladies were not unlike those that can be found in both children and standard pets like dogs and cats, but doctors had never actually repaired this issue in a chicken. The experimental surgery would cost Nothnagel $4,000 to try. But she was ready to do whatever it took.

“She is my soulmate,” Nothnagel explained. “I told my husband, ‘If Blue doesn’t make it, you might as well dig a hole big enough to put both of us in.’ I just don’t know if I can handle life without her. She’s just the coolest bird.” 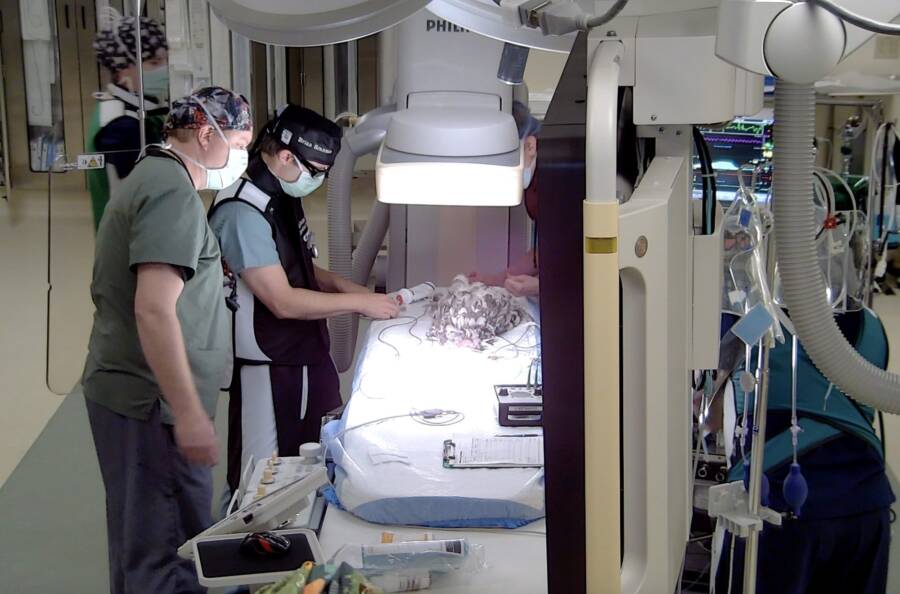 Colorado State University Veterinary Teaching HospitalBlue’s surgery took only 30 minutes, though it was an incredibly nerve-racking time for Nothnagel.

Finally, the surgery took place on November 10. Because chickens don’t have an anatomy suited to traditional open-heart surgery, veterinary cardiologist Brian Scansen and his team were forced to place a catheter through Blue’s neck to get to her heart.

“We got right to where we needed to be pretty quick,” recalled Scansen. “She was not terribly stable, her heart rate was erratic, her blood pressure fell. It was touch and go for a time.”

While everyone involved was concerned that Blue might die, the doctors were able to right the ship and the procedure only lasted 30 minutes. Within 12 hours, Blue was showing signs of making a full recovery. Suddenly, the brave little bird began eating, walking, and generally behaving as it used to. Unfortunately, there was a hefty to bill to pay. 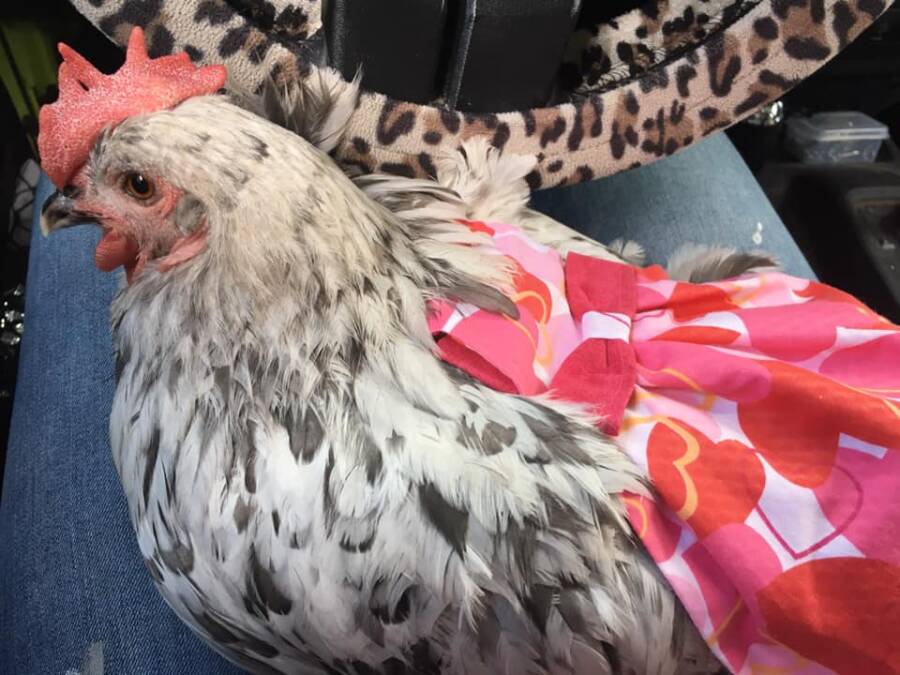 Between the operation itself and the numerous other appointments, the total cost of saving Blue’s life reached around $10,000. Furthermore, Nothnagel’s pet insurance didn’t cover an estimated $7,500 of the cost because the congenital heart defect was a pre-existing condition. Ultimately, however, none of that mattered to Nothnagel.

“It’s a lot of money,” she said. “But you’d do it for your kids, you’d do it for your dog. You wouldn’t even bat an eye if I said I spent $10,000 on my dog to have his heart repaired. But when you say it’s a chicken, people say, ‘Oh my God, you spent HOW MUCH on a chicken? You could just put her in a crockpot and go get another.'”

“I’d totally do it again,” said Nothnagel. “You want the best for your pets. She’s family.”

After learning about the woman who spent $10,000 to save her chicken’s life, read the story of Mike the headless chicken. Then, learn about some of the world’s weirdest pets.