The Secret Behind Japan’s ‘Dancing Squid’ Dish, Which Features A Headless Squid Writhing In Your Bowl

Known as "katsu ika odori-don," this bizarre delicacy showcases a freshly killed squid that "dances" when it's doused in soy sauce.

The sight of small tentacles writhing on a bed of rice might not whet the appetite for some folks, but for others, it is just what one expects while eating a Japanese dish called katsu ika odori-don, otherwise known as the “dancing squid bowl.”

The dancing squid dish has become a global phenomenon thanks to a series of viral videos that show what appears to be a lifeless cephalopod springing back to life when doused in soy sauce. In fact, the squid isn’t alive at all and only appears to “dance” thanks to a chemical process instigated by the salt in the soy sauce.

So how did people come to create this bizarre dish in the first place? Here’s the story behind Japan’s popular dancing squid bowl.

Where Did The Dancing Squid Dish Come From?

Katsu ika odori-don or dancing squid bowl can be found primarily in restaurants in the Aomori and Hokkaido prefectures.

This theatrical dish traditionally called katsu ika odori-don features rice or noodles in a bowl which is then topped with fish roe or eggs, seaweed, and fresh squid or cuttlefish. It can primarily be found in restaurants around the coastal Japanese prefectures of Aomori and Hokkaido, where the tradition likey began, though the historical roots of the odori-don dish have sparked some debate.

Some believe it is a modern interpretation of old Japanese practices like odorigui which means “dancing eating” and is the practice of eating something, usually tiny fish, while it’s still alive. The dancing squid dish could have also come from the more traditional practice of ikizukuri, which is when a chef prepares sashimi from live sea animals.

One experience food blogger posits that the practice of eating live animals originated in Japan as an “ostentatious display of wealth.” 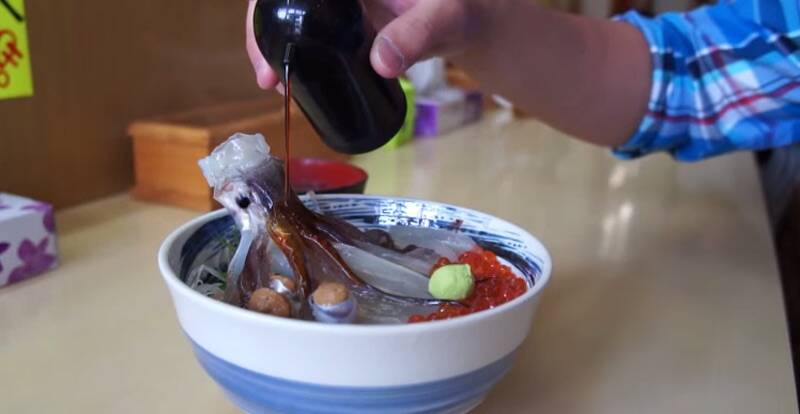 YouTubeThe squid begins to squirm when doused with soy sauce.

There are others who believe that the dancing squid dish drew inspiration from the Korean dish sannakji, which is made from a live octopus. Some scholars, however, believe that the dancing squid dish is simply a product of modern-day social media, which compels businesses like Ikkatei Tabiji Restaurant, an eatery in Hakodate, Japan, to come up with flashy food presentations.

The dancing squid dish first attracted global attention about a decade ago when Ikkatei Tabiji Restaurant began serving odori-don with the squid’s body still intact. When splashed with soy sauce, the dead squid began to “dance” on top of the bowl. It then quickly became an online spectacle and introduced the traditional dish to a whole new audience of Japanese and non-Japanese consumers.

But not everyone is amused by the dancing dish. In the beginning, the dancing squid drew fire from Western media, who questioned the ethics behind it. If the squid is “dead,” then how can it still be writhing on the plate? And if the sea creature is still moving while people consume it, could that be considered animal cruelty?

The secret behind the dancing squid lies in the chemical reaction between the soy sauce and the dead animal’s cells.

Westerners concerned about animal cruelty should not worry because the squid prepared in odori-don is already dead by the time it reaches a customer’s bowl. The secret to the dancing squid can actually be explained through simple science.

“Most of the tissue in an organism that’s recently dead, recently killed, is actually still alive,” explained Charles Grisham, a chemistry professor at the University of Virginia. “In this case, even though the brain function is missing, the tissues will still respond to stimuli.”

Because the squid’s head and brain are removed for the dish, it doesn’t experience any pain during its soy sauce shower, either. 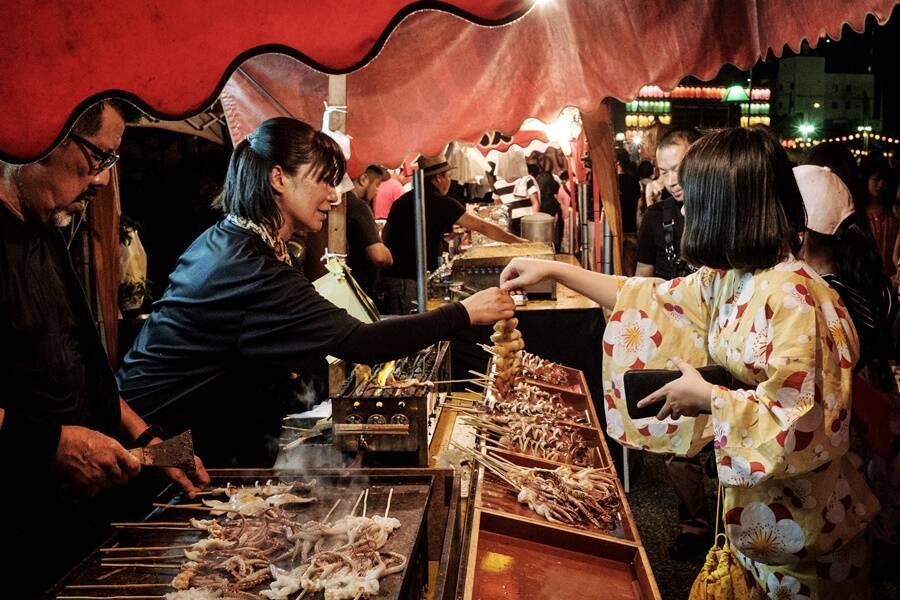 Yasuyoshi Chiba/AFP via Getty ImagesSquid is prepared in various ways in Japanese cuisine.

Japanese cuisine is known for its emphasis on fresh ingredients which makes this dancing spectacle possible. To prepare the odori-don, the chef swiftly cuts off the head of the squid before serving it on a bed of rice or noodles. Because its death was so recent, the squid’s muscle cells still retain Adenosine triphosphate (ATP), the main source for muscle contractions in animals.

When the soy sauce is poured, the ATP automatically responds to the sodium chloride (salt) in the sauce which causes the physical reaction of the dancing squid.

Interestingly, this phenomenon works whether or not the squid is wholly intact. Many restaurants serve the squid chopped into pieces, and still, spraying soy sauce on them brings the pieces “to life.” Of course, these results aren’t quite as dramatic as seeing a nearly-whole cephalopod “dance” around on your plate. As such, the theatrical presentation of the dancing squid bowl has now become a popular way to serve katsu ika odori-don across Japan.

A similar post-mortem physical reaction using cut frog legs was discovered by 18th-century scientists. It became the talk of the scientific community after Italian scientist Luigi Galvani placed a frog’s legs on an electrically-charged surface and touched the limbs with his scalpel, causing the frog legs to “dance.”

Galvani’s experiment became one of the early research foundations in anatomical movements, and his experiment has been recreated in the kitchen by home cooks. For example, a 2010 video in which frog-leg cutlets — a staple in French and Cajun cooking — appeared to be “dancing” after they were salted before being cooked has racked up 18 million views, and counting, as of this writing.

The dancing squid is certainly not suited for the more squeamish gastronomists amongst us. At the end of the day, the popularity of the dish is thanks to Japan’s zest for super-fresh ingredients and the shock-factor culture of our modern times.

Now that you’ve learned the electrifying secret behind Japan’s dancing squid dish, check out these 15 foods that were typical during Medieval times — but probably wouldn’t be eaten today. Then, learn about how scientists are turning human waste into food.