Meet Sergeant Stubby, The Canine Hero Of World War I

How a dog named Sergeant Stubby participated in 17 battles, rose to the rank of sergeant, and became a national icon. 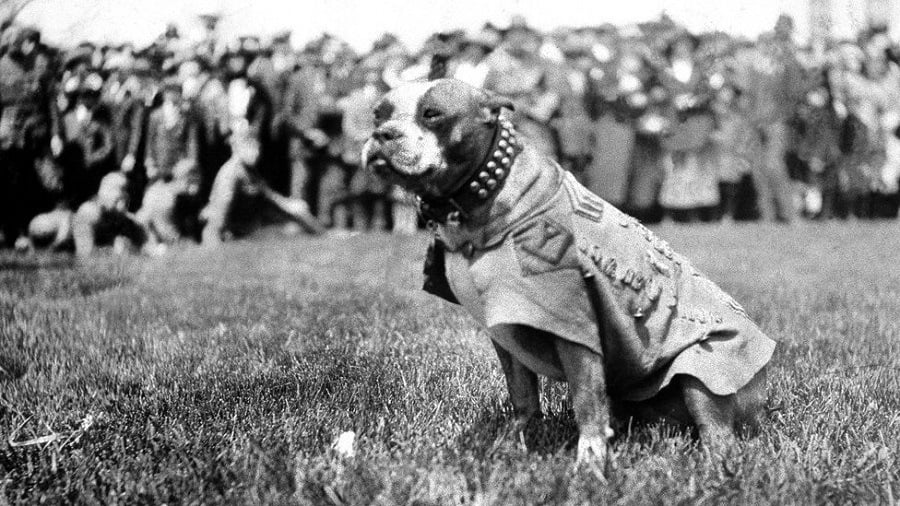 Sergeant Stubby, pictured in his battle vest that was eventually filled with medals. Image Source: Niume

Members of the 102nd Infantry Regiment were training at Yale in 1917 when a stray puppy roamed into their midst. Little did the soldiers know that the puppy watching them run drills would travel to the Western Front in France, participate in 17 battles, rise to the rank of sergeant, and become a national icon.

Private J. Robert Conroy took ownership of the dog and named him Stubby because of his short tail. Stubby stuck around while the 102nd Infantry trained, and he learned the bugle calls, the drills, and how to salute on command by raising his right paw. When Conroy and the 102nd Infantry were deployed to the front lines of France, Stubby was smuggled onboard the ship.

Stubby was exposed to everything from mustard gas to machine guns on the Western Front. After a mustard gas attack left him sensitive to the gas, he learned to warn soldiers and prevented them from sleeping through future gas attacks.

He also went out into no man’s land and found wounded soldiers. Perhaps most heroically, he stymied a German spy’s attempt to map the layout of the Allied trenches. He latched onto the leg of the spy and held him until U.S. soldiers arrived.

For that last act of bravery, Stubby was promoted to the rank of Sergeant by the commander of the 102nd Infantry. Stubby was later injured by a grenade, but he survived the large amounts of shrapnel in his chest and leg.

Sergeant Stubby was smuggled back into the U.S. by Conroy at the conclusion of the war, where he continued to build on his list of things dogs don’t normally get to do. He met Presidents Wilson, Harding, and Coolidge. He was presented with a gold medal by General John Pershing, the Commanding General of the United States. He was given a lifetime membership to the American Legion and the Y.M.C.A. He was the official mascot at Georgetown University while Conroy studied law.

Stubby’s legacy lived on after he died in 1926. He was given a half-page obituary in The New York Times, and Conroy preserved his skin on a mounted plaster cast. He later had a brick installed at the Liberty Memorial that reads “Sergeant Stubby/Hero Dog Of WWI/A Brave Stray.”

Sergeant Stubby was given to the Smithsonian in 1956, where he can still be seen today.

After this look at Sergeant Stubby, check out Wojtek the bear hero of World War II. Then, check out some of the other most fascinating military animals of all time.