Mind-Bending Jellyfish Species Captured Shape-Shifting At 2,500 Feet Below The Pacific

The jellyfish expanded to ten times its original size in the course of the show it gave researchers. 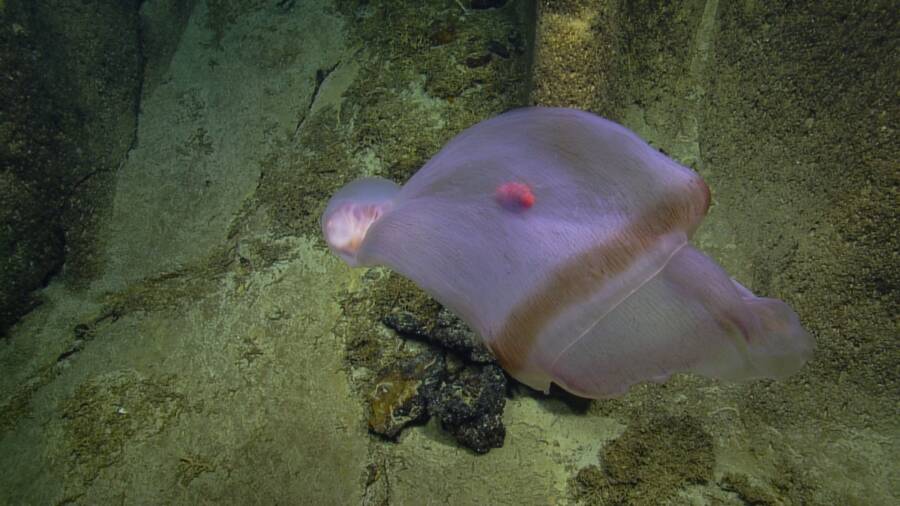 Nautilus LiveThe Deepstaria jellyfish can change shape, expanding itself to engulf its prey.

The ocean is full of wonderfully weird things, most of which we know very little. For example, the rare species of jellyfish known as Deepstaria enigmatica, named so after the submersible designed by French explorer Jacques Cousteau and, quite possibly, because the animal itself is so bizarre.

According to Live Science, a group of deep-sea scientists board the E/V Nautilus research vessel recently encountered the elusive sea creature while on a recon mission at 2,500 feet beneath the Pacific Ocean.

The specimen was found near Baker Island in the Pacific Remote Islands Marine National Monument by the E/V Nautilus using the Hercules ROV. It was spotted about halfway between the States and Australia.

The researchers recorded the jellyfish’s mind-boggling shapeshifting capabilities on video.

At first, the Deepstaria was found floating in a ghostly shape. Right through the translucent draping of its silky body (or what scientists refer to as its “bell”) appeared to be two things: a fairly large soft pink orb at the top, and a smaller red orb on its lower right side.

Then, the jellyfish began to move.

The jellyfish’s bell expanded above its “head” and continued to stretch out into what appeared to resemble a very thin blanket. It easily became ten times the size that it was before.

Researchers identified the red orb inside the jellyfish to be an isopod — a type of bottom-dwelling crustacean — that may have voluntarily hitched itself onto the inside of the jellyfish likely to munch on bits of the creature while protecting itself from predators. Some small fish find refuge among the tentacles of other jellyfish species like this as well.

But scientists have yet to determine whether or not Deepstaria do in fact share a symbiotic relationship with these small hitchhikers.

The first time marine scientists uncovered this species was in 1966, when three researchers aboard Cousteau’s Deepstar 4000 captured the first specimen, albeit only incompletely as parts of the jellyfish’s bell were lost when the specimen was brought aboard. Nonetheless, most of what we know about this animal came from that initial study.

Since then, there have only been about a dozen studies published on the species, especially considering how rare it is. But in 2017, some lucky scientists were able to record another Deepstaria jellyfish right off the coast of Mexico’s San Benedicto Island.

That specimen was quite large, measuring more than two feet long with a diameter of 1.8 feet, and also demonstrated the species’ unique shapeshifting capabilities.

“It’s just this crazy, weird alien thing,” David Gruber, a Radcliffe fellow at Harvard University and lead researcher on the 2017 study, told Live Science then. “We barely know anything about it.”

During that 2017 expedition, the team also captured a phenomenon called “jelly fall.” Similar to a “whale fall,” when the carcass of a dead whale or in this case, jellyfish, falls to the ocean floor, it is swarmed by various other creatures as food on the ocean floor is scarce.

This was the first scientific record of a Deepstaria jelly fall. 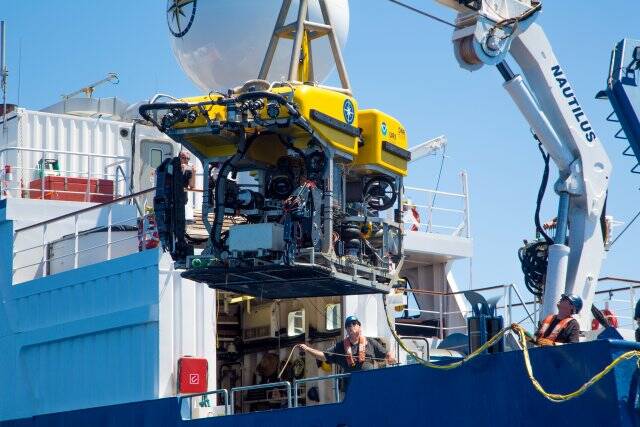 Both the 2017 and 2019 encounters with the rare jellyfish were captured by the Hercules ROV.

“There was a little crab party going on around this jelly,” Gruber said. The 2017 expedition used the Hercules ROV which is the same remotely operated vehicle that captured the most recent footage of the jellyfish.

Gruber attributed the success of the 2017 Deepstaria close encounter to the Hercules’ non-invasive nature; it carries high-tech cameras and boasts spotlights that can be dimmed to the brightness of a mere glow-stick.

“Usually when submarines go down, they go down with these big, powerful lights because they don’t want to bump into things and crash,” Gruber explained. “It’s like being at a party outside and the cops come and shine a flashlight in your face. That’s the kind of way we normally approach deep-sea life.”

Unlike other jellyfish, the Deepstaria does not have tentacles. It also has a habit of expanding its bell to engulf unsuspecting prey. Researchers are still trying to figure out its diet, but it’s a safe bet that it feeds on small fish and crustaceans like other jellyfish do.

The Hercules ROV has yet to wrap up its latest dive, so maybe they’ll uncover more mysteries surrounding this elusive jelly soon.

After this, learn about what killed the Megalodon, the most terrifying and garngantuan shark species to ever swim our oceans. And then, take a look at these glow-in-the-dark ‘sea pickles’ that have scientists concerned.