The Story Of Shavarsh Karapetyan, The Champion Swimmer Who Saved 20 People From A Sinking Trolleybus

After a trolleybus plunged into Yerevan Lake in Armenia in 1976, Shavarsh Vladimiri Karapetyan dove in and spent more than 20 minutes pulling people out from the wreckage. 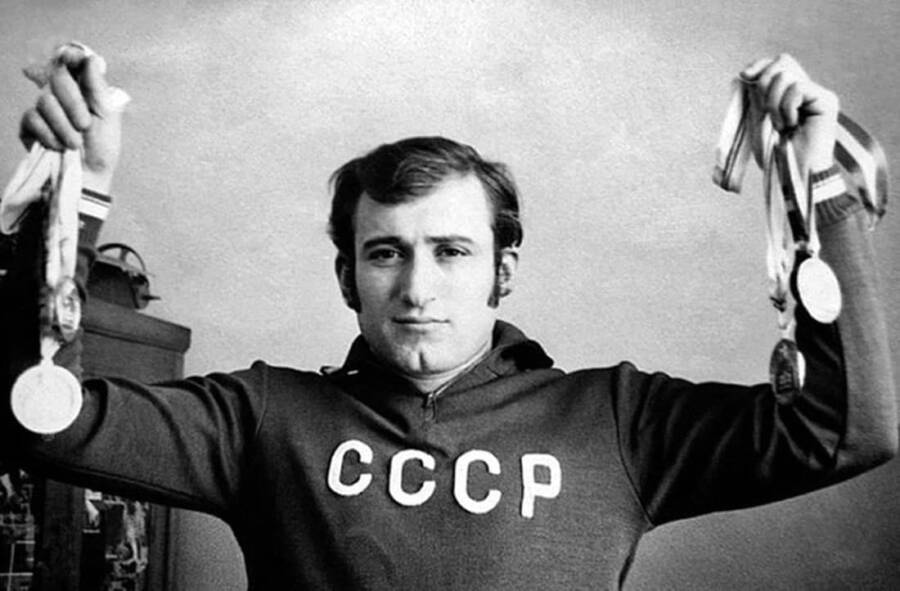 TwitterArmenian swimmer Shavarsh Karapetyan proved his bravery more than once.

Shavarsh Karapetyan said it sounded like a bomb. On a peaceful late summer day in Yerevan, Armenia, a trolleybus suddenly careened from the roadway and plunged straight into Yerevan Lake. While most watched in horror, Karapetyan sprang into action.

He had one goal: save as many people as possible. A 23-year-old champion finswimmer, Karapetyan dove into the lake, swam down to the submerged bus, and broke a window with his feet. Then he started pulling the desperate, drowning passengers to safety.

Karapetyan became a hero that day. But it was not the first time — nor the last — that he’d charge into danger to save strangers’ lives.

Shavarsh Karapetyan long seemed destined for great things. Born in Armenia on May 19, 1953, he showed early promise as an athlete.

Encouraged by his father, Karapetyan first trained in gymnastics — but his coach said he’d started too late to become a champion. Next, he worked at becoming a swimmer — but lacked the necessary flexibility. Finally, Karapetyan settled on finswimming, where his strong build and limitless energy gave him an edge. 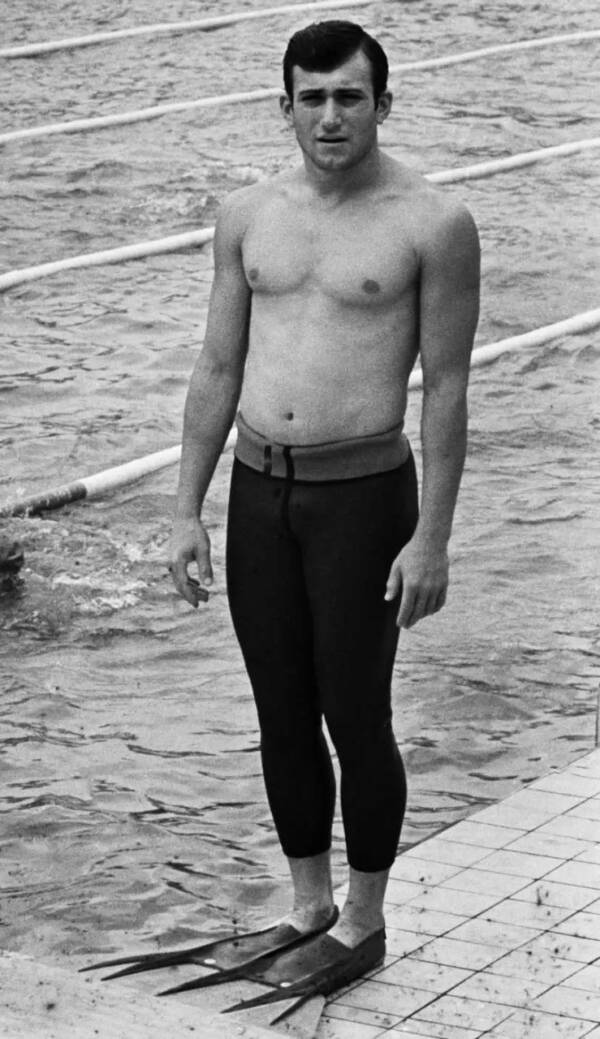 Finswimming — a sport that requires swimmers to race underwater with fins strapped to their feet — requires endurance and strength. For long distances, finswimmers would use snorkels or oxygen tanks. For short ones, they’d simply hold their breath.

Determined to make his father proud, Karapetyan trained hard. He ran up to 18 miles a day with a sand-filled backpack, jogged with boards strapped to his feet, and practiced holding his breath.

Soon, his hard work started reaping rewards. Karapetyan won gold at the 50 and 100-meter sprints at the 1972 European championships in Moscow, prompting a Soviet magazine to rave, “It’s safe to say we’ll see this young athlete from Armenia at many more major championships.”

Around this same time, Karapetyan also proved his fearlessness in the face of danger. He was on a bus in 1974, en route to a sporting center, when the driver got out to look at the engine. But the driver forgot to apply the handbrake.

As the bus rolled backward toward a gaping gorge, Karapetyan charged into the driver’s cabin and took control. He yanked on the brake — averting catastrophe.

Two years later, Shavarsh Karapetyan found himself on the edge of disaster yet again.

When Trolleybus 15 Fell Into Yerevan Lake

By 1976, Shavarsh Karapetyan’s athletic career had taken a sudden, painful turn. He’d been cut from the Soviet national team without explanation. It was, he reflected, perhaps because he young, because he’d been recently ill, or because he was Armenian.

On Sept. 16, 1976, the 23-year-old went to work out some of his frustration by running around the artificial lake in the middle of the country’s capital, Yerevan. Alongside his brother, Kamo, and his coach — and with a 45-pound bag of sand on his back — Karapetyan set out on a 13-mile run that would change his life forever.

While running, he suddenly heard a loud noise. Karapetyan looked up and saw that trolleybus number 15 had veered off the road and plunged straight into the lake. Witnesses later gave conflicting statements about how it happened, saying the driver had either argued with a passenger about making a stop or had been hit in the head by a pickpocket. 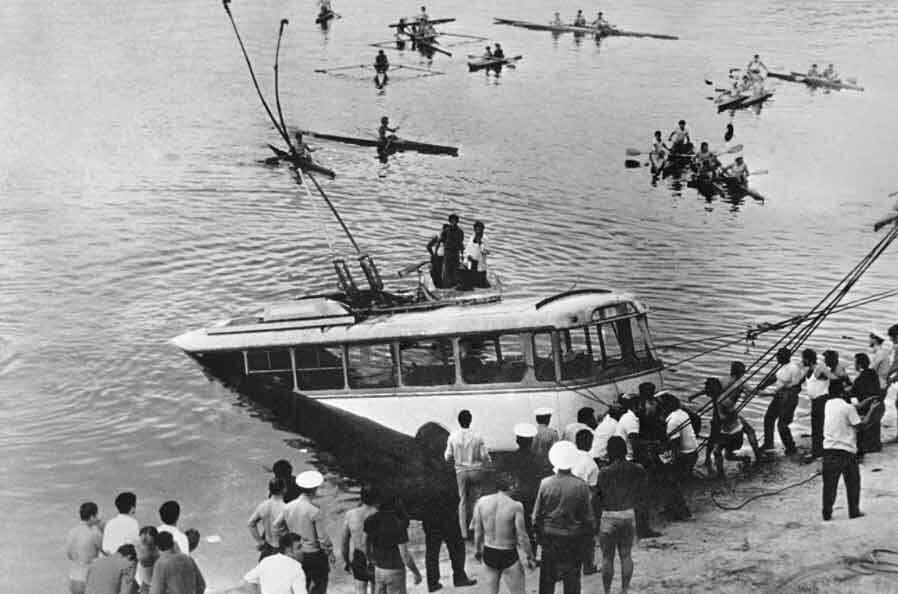 Russia/TwitterNinety-two people were on the trolleybus when it plunged into Yerevan Lake. Karapetyan can be seen standing shirtless on the shore.

“It was scary at first,” Karapetyan recalled. “It was so loud, as if a bomb went off.”

But at that moment, instinct took over. Shavarsh Karapetyan ran to the lake, took a deep breath, and jumped in. He swam fifteen feet below the surface and kicked open a window with his left leg. Blinded by the swirling silt, he reached inside and grabbed for any survivors.

“The most difficult thing was to knock out the rear window of the trolleybus,” Karapetyan said in 1982. The broken glass had sliced his leg. “The pain was unbearable… but then I did not think about it — I understood that there was little time.”

He dove again and again, 40 times, bringing up as many people as he could. After handing them off to his brother, who was also a champion swimmer and stayed on the surface to ferry people to shore, Karapetyan went back underwater.

“I didn’t see the person who saved me because he held me from behind when he dragged me up,” one 17-year-old survivor said. “But I remember his hand well — a strong, muscular hand. I could feel I was being pulled somewhere, and then I blacked out again.”

Shavarsh Karapetyan dove until rescue workers begged him to stop. He dove until he emerged with only a cushion and realized that he had begun growing faint from the lack of oxygen.

“I had nightmares about that cushion for a long time,” Karapetyan said. “I could have saved someone else’s life.”

In the end, he pulled 37 people out of the lake, 20 of whom survived. Nine others escaped on their own through the broken window.

Karapetyan bandaged the lacerations on his leg and went home. But that evening, his temperature spiked, and he began to have convulsions. A physician and family friend took him to the hospital, where he spent several heartstopping days in critical care.

The cold, polluted water and wounds on his legs had led to pneumonia and blood poisoning. Though he survived, it seemed all but sure that his athletic career was over. It was three weeks before he was able to walk again.

Yet, it took years for the Soviet Union to fully recognize what he had done.

“Immediately after the accident, some people wanted to publish an article in a newspaper, but this was not allowed,” Karapetyan explained. “In the USSR, trolleybuses were not supposed to fall into the water.”

Following the trolleybus accident, Shavarsh Karapetyan tried to return to finswimming. But his repeated dives in Yerevan Lake had permanently damaged his respiratory system. And he felt a strange, new aversion to being in the water. 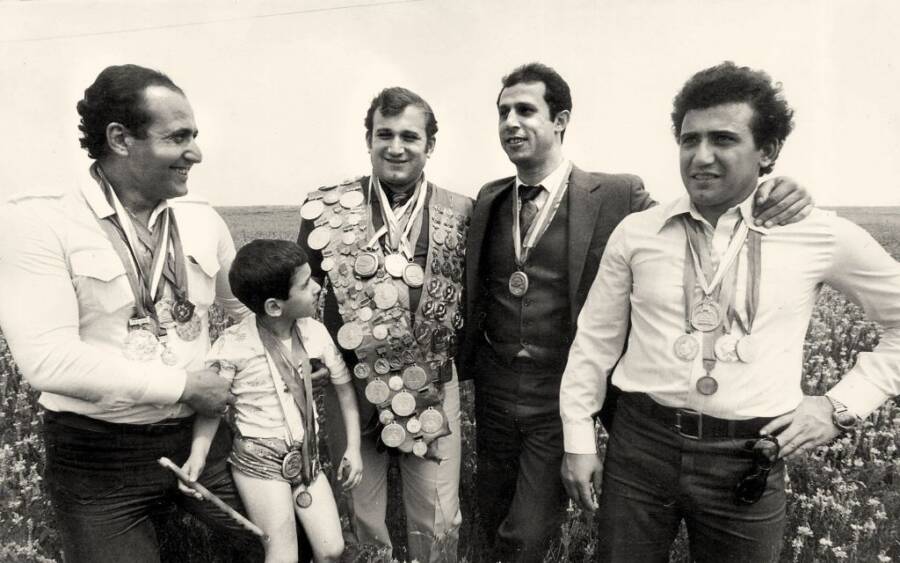 Nevertheless, he competed a handful more times. Karapetyan set a world record in the 400-meter event at the USSR championship and later won gold and bronze medals at the European championship in Hungary. After that, Karapetyan hung up his fins for good.

But his heroism in Yerevan remained unknown — until 1982. That year, a journalist heard about the trolleybus accident while covering a finswimming competition and wrote about it for the Moscow newspaper Komsomolskaya Pravda. Though the article made no mention of the trolleybus fatalities, it did highlight Karapetyan’s heroism.

Like that, Shavarsh Karapetyan became a hero. Soviet authorities awarded him the Order of the Badge of Honor, the Minor Planet Committee named an asteroid after him, and tens of thousands of Soviet citizens wrote him admiring letters.

Karapetyan could have rested on his laurels at that point. But in 1985, when Yerevan’s Sports and Concert Complex caught fire, he raced into the flames to save people — just as he had dove into the lake.

He spent the rest of his life living quietly. Karapetyan moved to Moscow and opened up a shoe company. But his countrymen never forgot him and in 2014 tapped Karapetyan to carry the Olympic torch into the Kremlin ahead of the Winter Games in Sochi. He proudly said that he was carrying to torch for both Russia and Armenia.

Now, decades after the rescue that made him famous, Shavarsh Karapetyan says that he wouldn’t change a thing. Diving into Yerevan Lake that day cost him his athletic career. But he would do it again.

After reading about the heroic life of Shavarsh Karapetyan, look through these devastating photos of the Armenian genocide. Or, discover the stories of these eight real-life heroes.