‘Unbought And Unbossed’: The Trailblazing Presidential Campaign Of Shirley Chisholm

In 1968, Shirley Chisholm made history when she became the first African American woman elected to Congress. Just four years later, she set her sights on the White House. 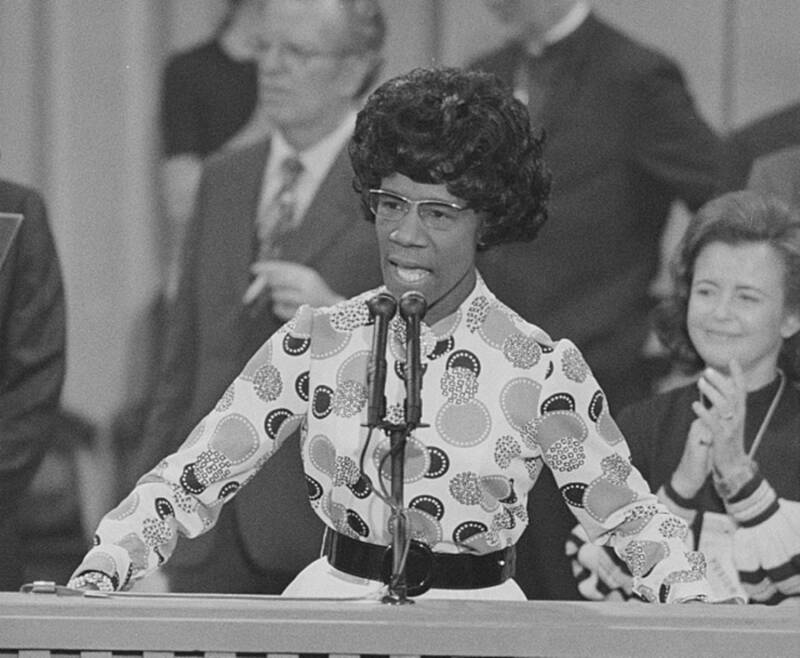 Library of CongressShirley Chisholm made history in U.S. politics — twice.

In 1968, Shirley Chisholm made history when she became the first African American woman elected to U.S. Congress. A few years later, she made history again as the first black female presidential candidate to seek the nomination from a major political party.

Even though she didn’t win, her legacy of courage endures, and her remarkable journey was portrayed in the 2020 Hulu series Mrs. America.

This is her true story. 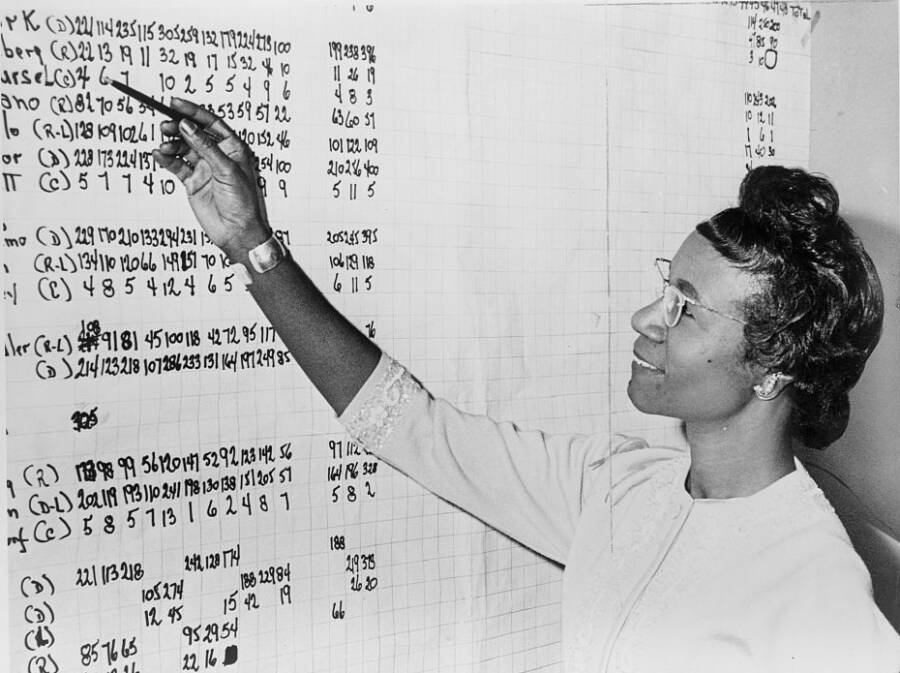 Library of CongressHer campaign opponents diminished her expertise as a serious educator by referring to her as “a schoolteacher.”

Shirley Chisholm was born Shirley Anita St. Hill on Nov. 30, 1924, in Brooklyn, New York. She was the eldest of four daughters to working-class Caribbean immigrants. Her father, Charles St. Hill, was a factory laborer from Guyana, while her mother, Ruby Seale St. Hill, was a seamstress from Barbados.

In her autobiography Unbought And Unbossed, Shirley Chisholm shared her family’s financial struggles. She and her siblings were sent to live in Barbados on her grandparents’ farm while Shirley’s parents worked to set up a comfortable life in Brooklyn.

Shirley received an early education through the island’s stringent British education system. She was a rambunctious child and a quick learner. After school, the siblings performed chores around the farm, such as feeding the chickens and caring for the cows.

After Shirley returned to the United States in 1934, she attended Brooklyn schools where she excelled in academics. She later went to Brooklyn College where she studied sociology and was a star on the debate team. Her professors encouraged her to consider politics, which Shirley brushed off due to her “double handicap” as a woman and an African American. 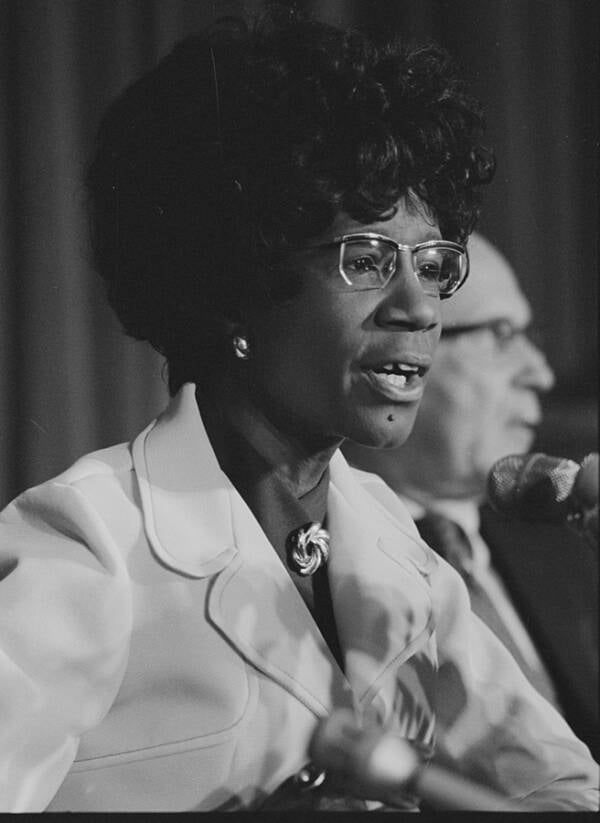 Library of CongressAs a politician, Shirley Chisholm was known for her boldness and candor in advocating for progressive policies.

Shirley Chisholm focused on becoming a teacher mostly because, as she put it, “There was no other road open to a young black woman.” Her first job out of college was as a nursery school teacher before she worked her way up to become the director of the Hamilton-Madison Child Care Center.

In 1959, due to her expertise in child education, Shirley Chisholm was hired as an educational consultant for New York City’s Division of Day Care. But before long, she would soon heed the call to politics.

Her Foray Into Politics 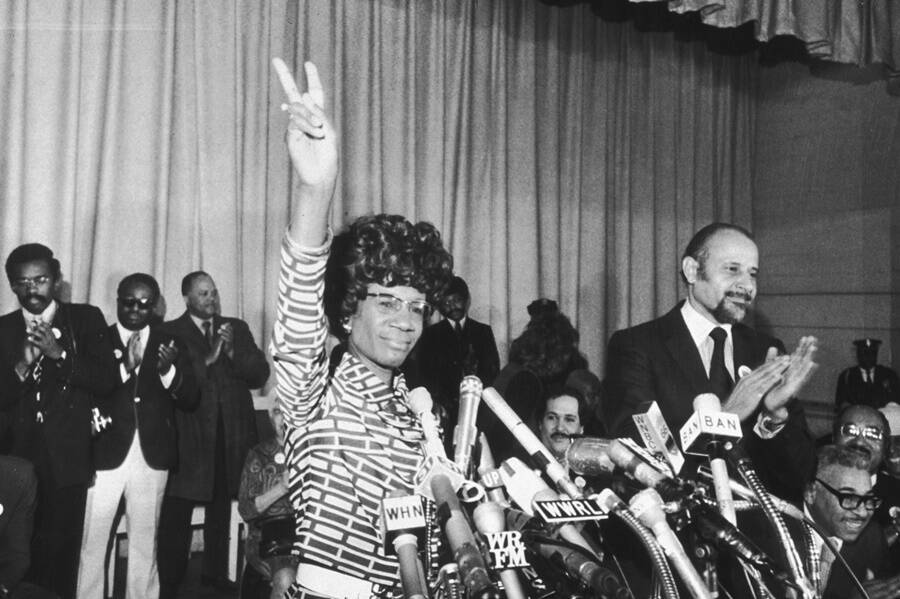 Don Hogan Charles/New York Times Co./Getty ImagesShirley Chisholm stunned the public and her political fellows when she announced her candidacy for the Oval Office.

By the 1940s, Brooklyn had a growing community of Afro-Caribbean immigrant enclaves but it was still heavily segregated between white and black residents, particularly in Shirley Chisholm’s neighborhood of Bedford-Stuyvesant.

She made a name for herself as a political organizer. At town halls, she challenged elected officials who were complacent in their jobs, asking about trash services and other public services that never came.

“That I am a national figure because I was the first person in 192 years to be at once a congressman, black, and a woman proves, I think, that our society is not yet either just or free.”

Shirley Chisholm was also engaged in the politics of the neighborhood’s black community. She was part of the early formation of the Bedford-Stuyvesant Political League (BSPL). The organization’s campaign helped successfully elect Brooklyn’s first black judge.

Her progressiveness and outspoken demeanor made her enemies out of the local establishment but the experience taught her a lot about politics. 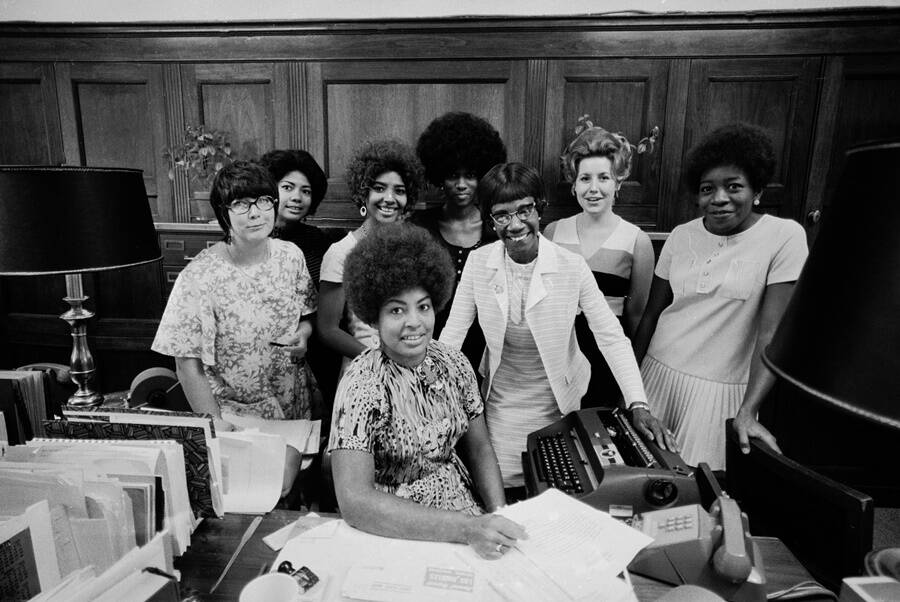 A fallout with her mentor Wesley McD. “Mac” Holder foreshadowed the resistance Chisholm would face from her black male colleagues during her bid for the U.S. presidency.

“I was well on the way to forming my present attitude toward politics as it is practiced in the United States,” Chisholm wrote. “It is a beautiful fraud that has been imposed on the people for years, whose practitioners exchanged gilded promises for the most valuable thing their victims own: their votes.”

In 1964, Shirley Chisholm ran a successful campaign for public office and was elected to the New York State legislature.

A few years later, she launched a campaign for Congress. She won the election in 1968, becoming the first African American congresswoman.

After her big win, she became more determined to change things for women and people of color on an even larger scale. 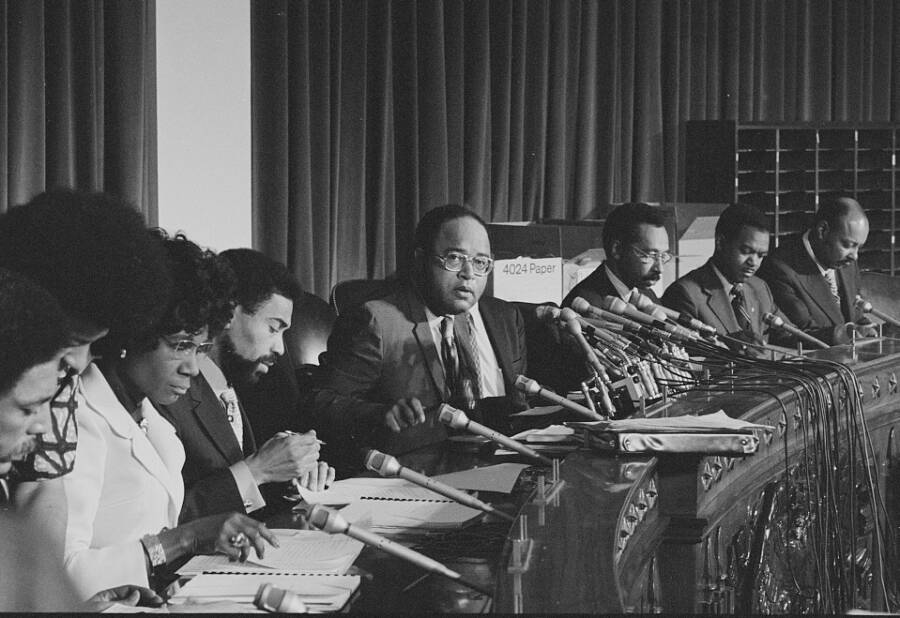 Library of CongressShirley Chisholm with members of the Congressional Black Caucus, which she co-founded.

When she was appointed to the Committee on Agriculture, Shirley Chisholm publicly voiced her dissatisfaction. She was later moved to the Veterans’ Affairs Committee. In response, she quipped, “There are a lot more veterans in my district than trees.”

“She was unafraid of anybody,” said author Robert Gottlieb, who was hired as an intern in Chisholm’s congressional office. “Her slogan was ‘unbought and unbossed.’ She was really unbossed.” Chisholm’s achievement was indeed remarkable given the lack of racial and gender diversity within the country’s legislative branch.

Shirley Chisholm was the first black woman to run for president on a major party platform.

In January 1972, Shirley Chisholm declared her candidacy for the U.S. presidency, making her the first African American woman to run on a major party platform for the country’s highest office.

Chisholm had co-founded the National Women’s Political Caucus (NWPC) alongside feminists like Gloria Steinem, Betty Friedan, and fellow congresswoman Bella Abzug in 1971. The organization made huge strides in pushing for the ratification of the Equal Rights Act (ERA) before it was killed by an opposition led by right-wing activist Phyllis Schlafly.

Shirley Chisholm was unable to garner support for her candidacy from colleagues at the NWPC. Abzug and Steinem — who wrote a 2019 op-ed refuting her alleged abandonment of Chisholm — supported George McGovern, Chisholm’s white male rival for the Democratic nomination. 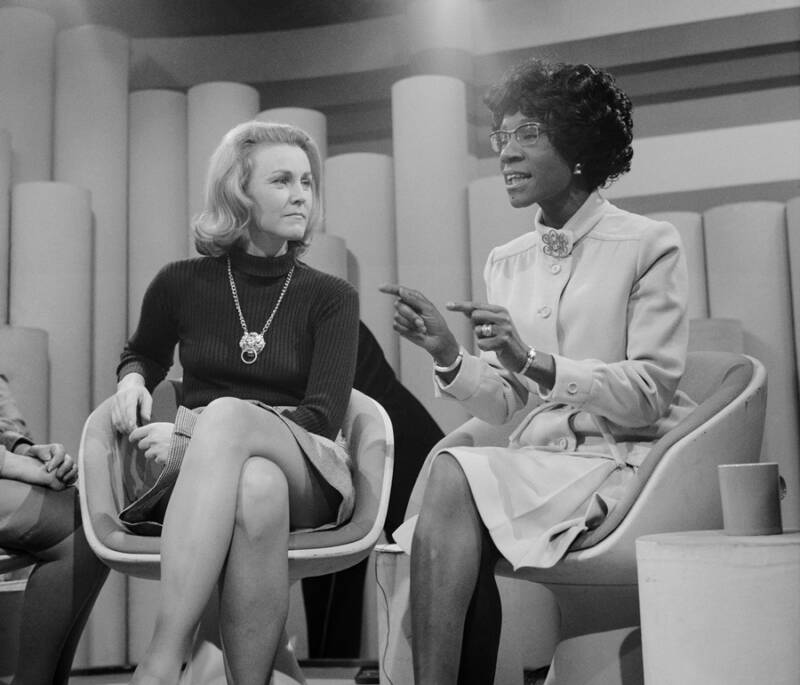 CBS via Getty ImagesHer historic campaign was hindered by racial and gender bias.

Her candidacy also split the new Congressional Black Caucus, whose male members resented Chisholm for taking away their chance at the nomination. Prominent black leaders like Jesse Jackson, John Conyers Jr., and Julian Bond all stumped for McGovern.

“Black male politicians are no different from white male politicians,” she said. “This ‘woman thing’ is so deep. I’ve found it out in this campaign if I never knew it before.”

Similarly, voters were unconvinced that Shirley Chisholm was a strong enough candidate to beat then-President Richard Nixon who was running for reelection.

The racial and gender bias she faced as a black woman candidate led Chisholm to win just 152 delegates or 10 percent of the votes at the Democratic National Convention — a respectable showing but not enough to secure the party’s nomination. 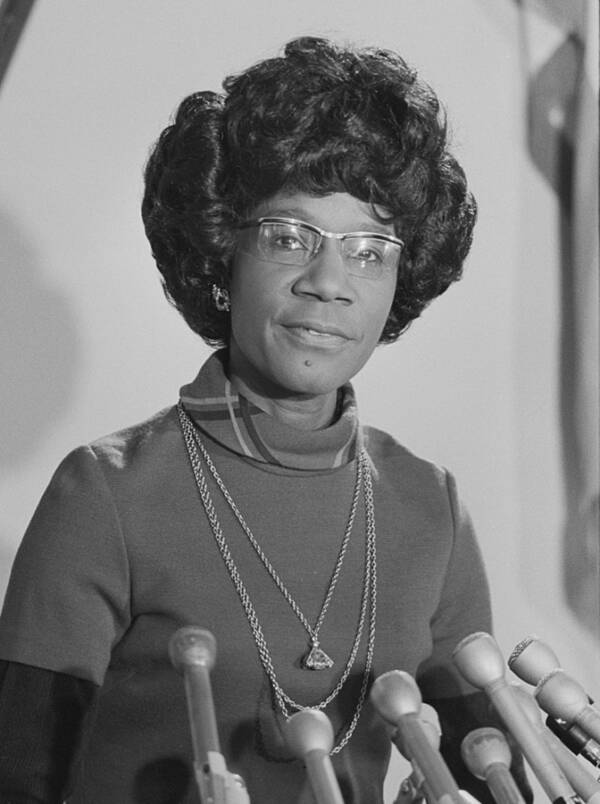 Library of Congress Despite her loss in the election, Chisholm’s legacy inspired a new generation of women leaders.

After her loss, Shirley Chisholm continued to serve in Congress until 1983. She taught at Mount Holyoke College, co-founded the National Political Congress of Black Women, and spent her last years in Florida.

“I want to be remembered as a woman… who dared to be a catalyst of change,” Chisholm said of the legacy she wished to leave. She died in 2005.

Chisholm’s courage to secure a seat at the table despite her marginalized identities as both a woman and an African American has inspired a new generation of women of all races in politics. 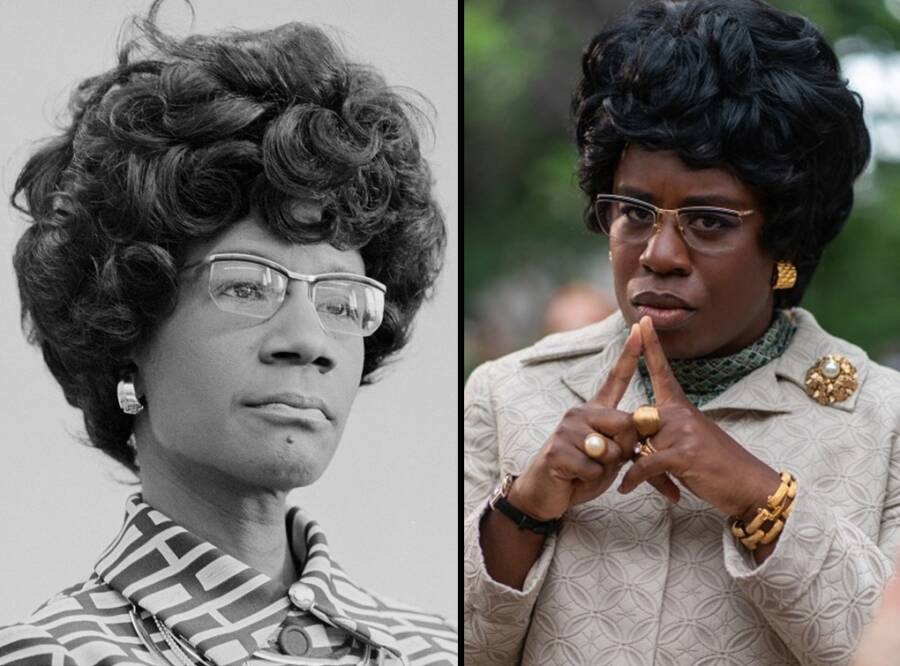 As of 2020, more than 50 years since Shirley Chisholm was elected to Congress, there have been 47 African American women who have served in Congress.

Among them is U.S. Rep. Ayanna Pressley, who became the first black congresswoman elected in Massachusetts in 2018. She now sits in Chisholm’s former office in the Longworth House Office Building.

“I feel a soul tie to Shirley Chisholm,” Pressley said of the late congresswoman. “The vibe of her office fills me with the courage to boldly lead, boldly legislate, and to never forget those who sent me here.” 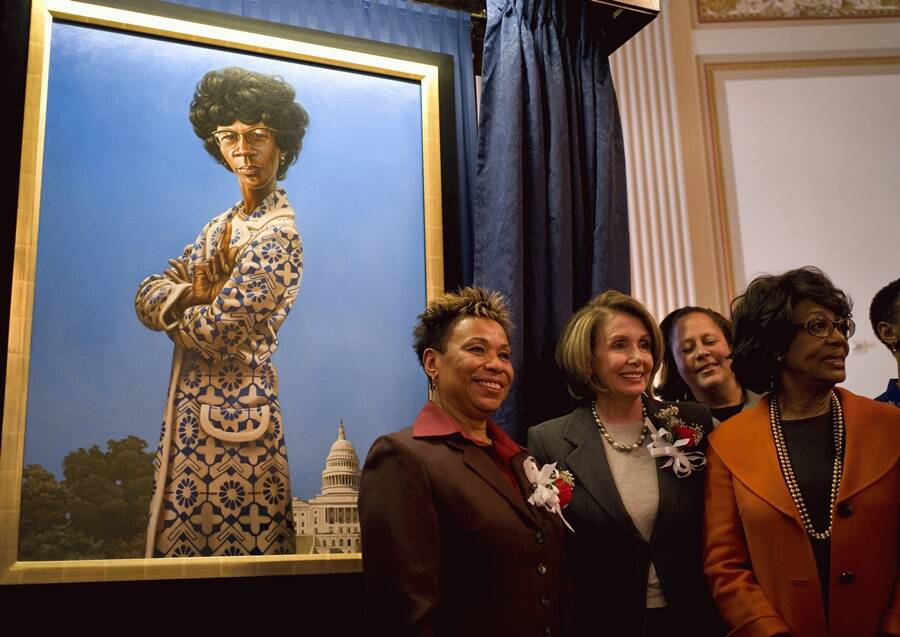 Scott J. Ferrell/Congressional Quarterly/Getty ImagesMembers of Congress stand in front of a portrait of Shirley Chisholm as it was unveiled.

Her progressive influence has also seeped into popular culture as her story is adapted on screen. Actress Uzo Aduba recently portrayed the firebrand politician in the 2020 Hulu series Mrs. America, which takes root in the midst of the fight for the ERA.

“I think there have been countless women, women of color, who have had a huge piece to do with the forward progression of this country,” Aduba told Oprah Magazine about her portrayal of Chisholm. “I would like for her to hold the space that I believe she deserves.”

A film titled The Fighting Shirley Chisholm is also in the works, with Oscar winner Viola Davis set to star in the movie.

But the recognitions may have come a little too late. As former congressman Charles Rangel, who knew Chisholm, puts it, “Shirley did not get this type of support from men or women at the time. We always wait until somebody dies to do what we wish we had done while they were alive.”

Now that you’ve learned about Shirley Chisholm, read about Ella Baker, the unsung hero of the U.S. civil rights movement. Next, follow the inspiring story of Katherine Johnson, the trailblazing NASA scientist.