The shoebill stork has to be one of the craziest-looking birds on planet Earth. The giant avian is native to the swamps of Africa and is best known for its prehistoric features, in particular, its strong hollow beak which looks an awful lot like a Dutch clog.

This living dinosaur was beloved by the ancient Egyptians and has the power to overtake a crocodile. But that’s not all that makes this so-called Death Pelican unique.

If you’ve ever seen a shoebill stork, you might have easily mistaken it for a muppet — but it’s more Sam Eagle than is Skeksis of Dark Crystal.

The shoebill, or Balaeniceps rex, stands at an average height of four and a half feet. Its massive seven-inch beak is strong enough to decapitate a six-foot lungfish, so it’s no wonder why this bird is frequently compared to a dinosaur. Birds are, in fact, evolved from a group of meat-eating dinosaurs called theropods — the same group which the mighty Tyrannosaurus rex once belonged to, though birds were descended from a branch of smaller-sized theropods. 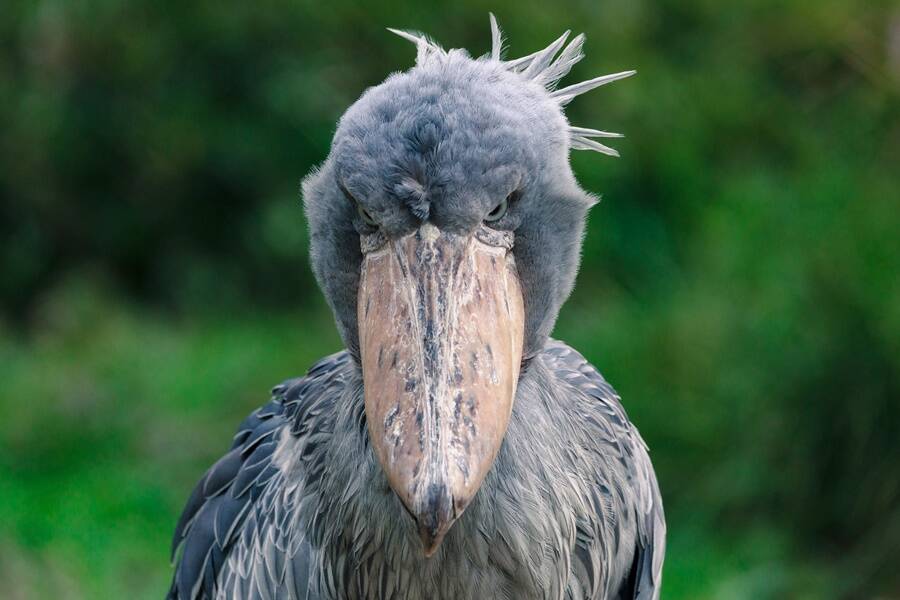 Yusuke Miyahara/FlickrThe shoebill looks prehistoric because, in part, it is. They evolved from dinosaurs hundreds of millions of years ago.

As birds evolved from their prehistoric cousins, they gave up their teeth-tipped snouts and developed beaks in their stead. But when gazing at the shoebill, it appears that this bird’s evolution from its prehistoric relatives didn’t progress all that much.

Of course, these giant birds have much closer relatives in the modern world. Shoebills were previously referred to as shoebill storks because of their similar stature and shared behavioral characteristics, but the shoebill is actually more similar to pelicans — particularly in its violent hunting methods. 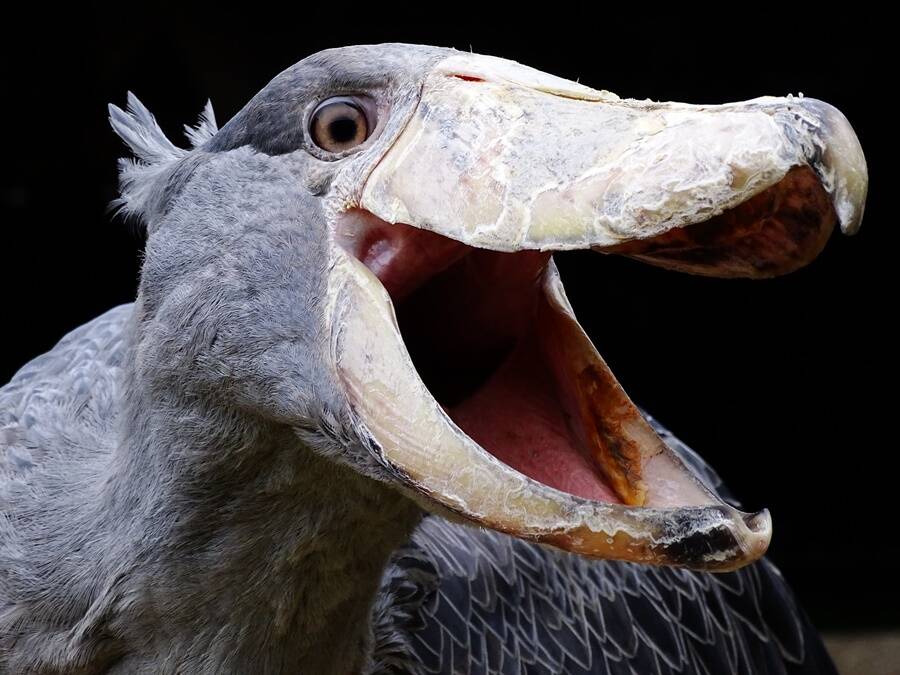 Shoebills do also share a few physical traits with herons such as their powder-down feathers, which can be found on their breast and belly, and their habit of flying with their neck retracted.

But despite these similarities, the singular shoebill has been classified in an avian family all its own, known as Balaenicipitidae.

The most striking feature on a shoebill is no doubt its substantial beak. 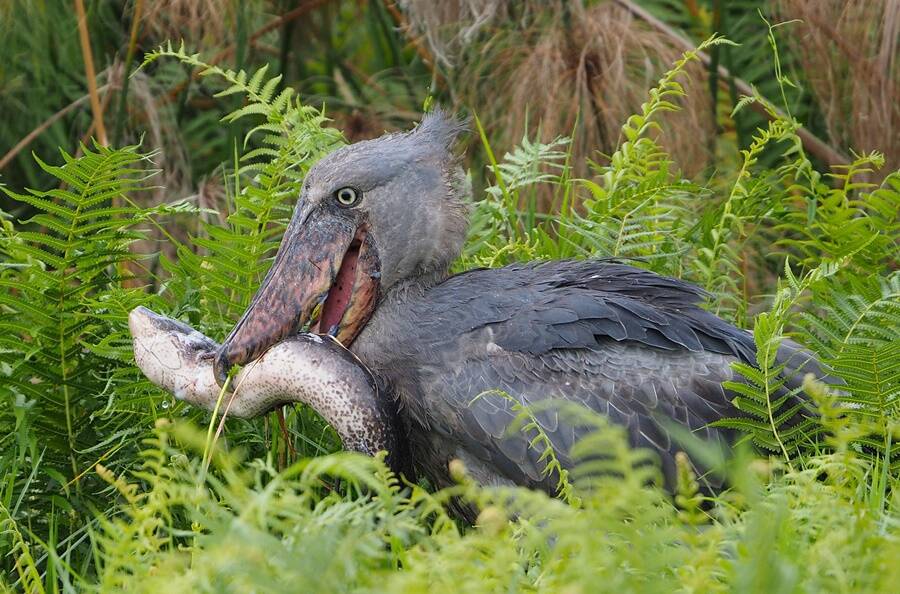 Rafael Vila/FlickrShoebills prey on lungfish and other small animals like reptiles, frogs, and even baby crocodiles.

This so-called Death Pelican boasts the third-longest bill among birds, behind storks and pelicans. The sturdiness of its bill is often likened to a wooden clog, hence the bird’s peculiar name.

The inside of a shoebill’s beak is spacious enough to serve multiple purposes in its day-to-day life.

For one, the bill can produce a “clapping” sound that both attracts mates and wards off predators. This sound has been likened to a machine gun. Their beaks are also frequently used as a tool to scoop up water to cool themselves off in the tropical African sun. But the most dangerous purpose it serves is as a super-efficient hunting weapon.

Take a look at the shoebill in mind-bending motion.

Shoebills hunt during the daytime and prey on small animals like frogs, reptiles, lungfish, and even baby crocodiles. They are patient hunters and slowly wade through the water scouting the territory for food. Sometimes, shoebills will spend long periods of time motionless while they wait for their prey.

Once the shoebill sets its sights on an unsuspecting victim, it will collapse its statue-like pose and lunge at full speed, piercing its prey with the sharp edge of its upper beak. The bird can easily decapitate a lungfish with just a few thrusts of its bill before swallowing it in a single gulp.

Although they are fearsome predators, the shoebill is listed as a vulnerable species on the International Union for Conservation of Nature’s (IUCN) Red List of Threatened Species, a conservation status that is only a step above endangered.

The bird’s declining numbers in the wild are largely due to its diminishing wetland habitat and overhunting for the global zoo trade. According to the IUCN, there are between 3,300 and 5,300 shoebills left in the wild today.

A Day In The Life Of A Shoebill Bird 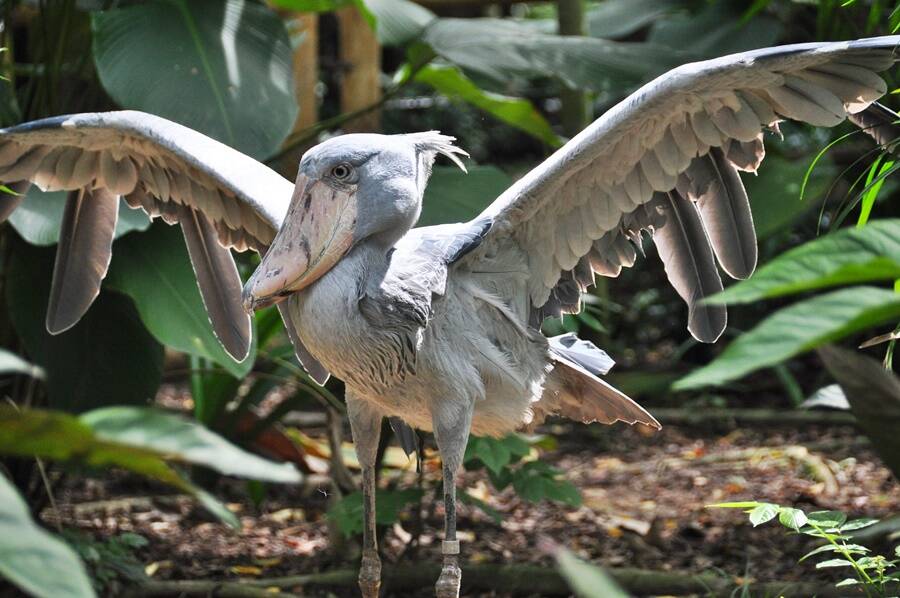 Shoebills are a non-migratory bird species native to the Sudd, a vast swamp territory in South Sudan. They can also be found around the wetlands of Uganda.

They are solitary birds and spend most of their time wading through deep swamps where they can collect plant material for nesting. Making their habitat in the deeper parts of the swamp is a survival strategy that allows them to avoid potential threats like full-grown crocodiles and humans.

As it braves the hot wilderness of Africa, the shoebill keeps itself cool using a practical, albeit bizarre, mechanism that biologists call urohydrosis, during which the shoebill excretes on its own legs. The ensuing evaporation creates a “chilling” effect.

Shoebills also flutter their throats, which is a common practice among birds. The process is known as “gular fluttering” and it involves pumping the upper throat muscles to release excess heat from the bird’s body. 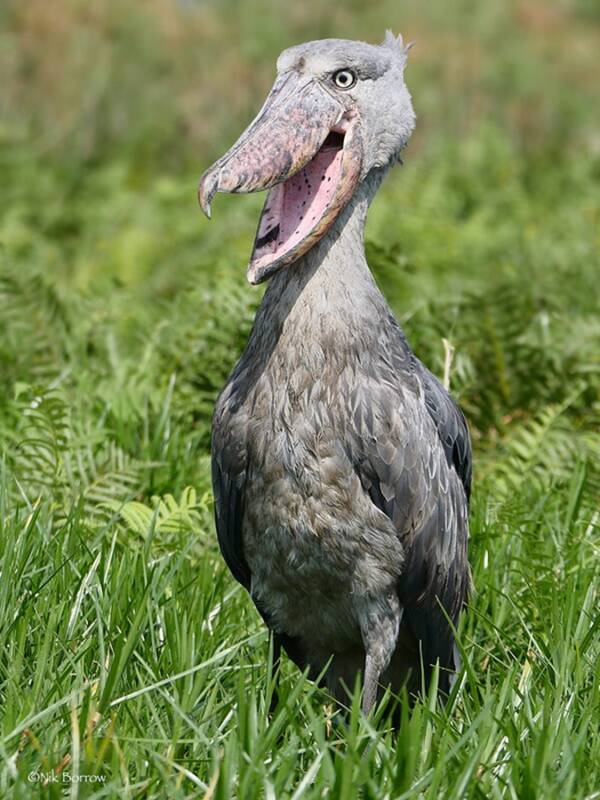 Nik Borrow/FlickrShoebills are monogamous birds yet remain solitary in nature, often wandering off to forage on their own.

When the shoebill is ready to mate, it builds a nest atop floating vegetation, carefully concealing it with mounds of wet plants and twigs. If the nest is secluded enough, the shoebill can use it repeatedly from year to year.

Shoebills typically lay one to three eggs per clutch (or group) and both the male and female take turns incubating the eggs for over a month. Shoebill parents will often scoop up water in their beaks and douse it on the nest to keep their eggs cool. Sadly, once the eggs hatch, the parents typically nurture only the strongest of the clutch, leaving the rest of the chicks to fend for themselves.

Despite their large body, the shoebill weighs between eight to 15 pounds. Their wings — which typically stretch in excess of eight feet — are strong enough to support their large frames when in the air, creating a striking silhouette for land-bound birdwatchers.

Beloved by birdwatchers and ancient cultures alike, the shoebill’s popularity has also become a danger. As a threatened species, their rarity has made them a precious commodity in the illegal wildlife trade. Private collectors in Dubai and Saudi Arabia will reportedly pay $10,000 or more for a live shoebill.

Hopefully, with increased conservation efforts these striking prehistoric-looking birds will continue to survive.

Now that you’ve learned about the prehistoric-looking shoebill stork that’s rightly earned its nickname of the “death pelican,” check out seven of the ugliest yet fascinating animals on Earth. Then, take a look at 29 of the world’s weirdest creatures.