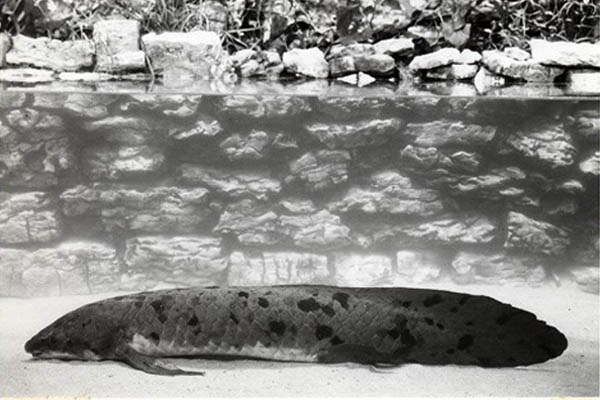 Shedd AquariumA photo of Granddad from 1933.

The late, four-foot-long Australian lungfish had been lazily swimming in Chicago’s Shedd Aquarium for more than eight decades. His name, appropriately enough, was Granddad.

The fish, who was likely around 100 years old, was a global legend. After being euthanized for humanitarian reasons on Sunday, the aquarium’s staff wrote a heartfelt tribute to its beloved star.

As a young adult, Granddad caught a steamship ride to America in 1933. After stopping to pick up a few hundred Pacific fishes in Hawaii, he and his mate were taken to Los Angeles. The couple then boarded the aquarium’s life-support-outfitted railroad car for the last leg of the 9,000 mile journey to Chicago.

As a Sheddd attraction, Granddad spent most of his time hanging out in the sand at the bottom of his tank. Several times an hour, though, he put on a show for guests when he would “slowly rise from his apparent torpor at the bottom of the habitat, slowly flap his large pectoral and pelvic fins, and slurp air at the surface.”

He also enjoyed startling his caretakers with loud snorts.

Throughout his life, more than 104 million aquarium guests have had the opportunity to visit the fish. People who saw Granddad when they were young have now taken their grandchildren to find the star’s distinct spots amidst his younger tank-mates.

“For a fish who spent much of his time imitating a fallen log, he sparked curiosity, excitement and wonder among guests of all ages who would hear his story,” Bridget Coughlin, the aquarium’s president, told the Associated Press.

Granddad mostly ate fish, shrimp, fruits and vegetables, but his favorite treats were worms, which he enjoyed — in a subdued, lungfish kind of way — every “Worm Wednesday.”

In some ways, Granddad was a diplomate, representing Australia and encouraging those who saw him to take an interest in conservation efforts. In 2013, the lungfish was presented with a proclamation from the Australian government celebrating the relationship between the country and the aquarium.

Now that he’s gone, hundreds of his fans are sharing their favorite memories of the fish.

One local teacher always used a Granddad fact as an extra credit question. Another remembers seeing Granddad just the other week and thinking he didn’t look a day over a few decades. Several people had one particular connection in common.

“I remember seeing him when I was a little boy visiting the aquarium,” Nathan wrote in a Facebook comment. “I would always check in with him during the many, many trips I’ve made. In fact, in 2015, my wife and I got married at the aquarium right in front of his tank so he could be our witness.”

Next, check out this deep sea fisherman’s most bizarre discoveries. Then, learn about scientists’ recent discovery of the legendary sea blob.