Man-Eaters And Monsters: The 15 Weirdest Freshwater Fish Ever Caught

By All That's Interesting | Checked By Erik Hawkins

River Monsters' Jeremy Wade on the weirdest river fish he's hauled in over the years, including giant piranhas and a fish that changes sex.

For over 30 years, extreme angler and host of River Monsters Jeremy Wade has been scouring the world to uncover the world’s weirdest river fish. Seen far less often than oceanic fish due to the murky, low visibility nature of their habitats, many of the beasts he hauls out are being caught on camera for the very first time.

Here, he talks All That Is Interesting through 15 of the weirdest river fish he’s ever caught, from 280 pound stingrays and man-eating catfish to giant piranhas and a fish that changes sex: 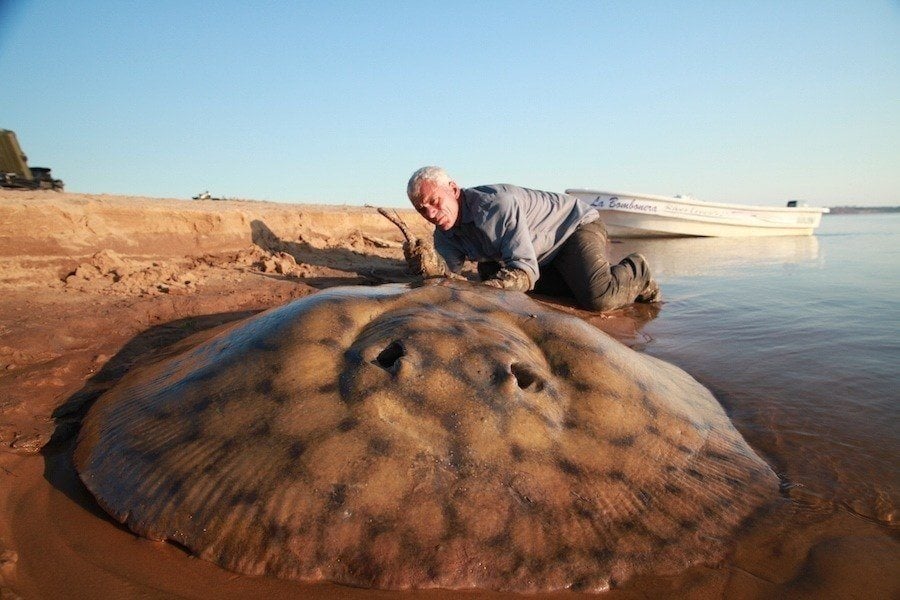 “This was in Argentina, in the Paraná river. Stingrays won’t generally try to cause a fatality, but if you step on one, they take exception to that — it’s pure self defense, they’ll stab you in the foot. As you can see, it’s pretty well camouflaged, too.

“I estimated this one’s weight at around 280 pounds, which is ridiculous. Catching this was the longest it’s ever taken me to get anything in — ten minutes short of four hours. There’s no finesse to bringing in a stingray, you’re just using very heavy gear and trying to break the suction that it has with the bottom.” 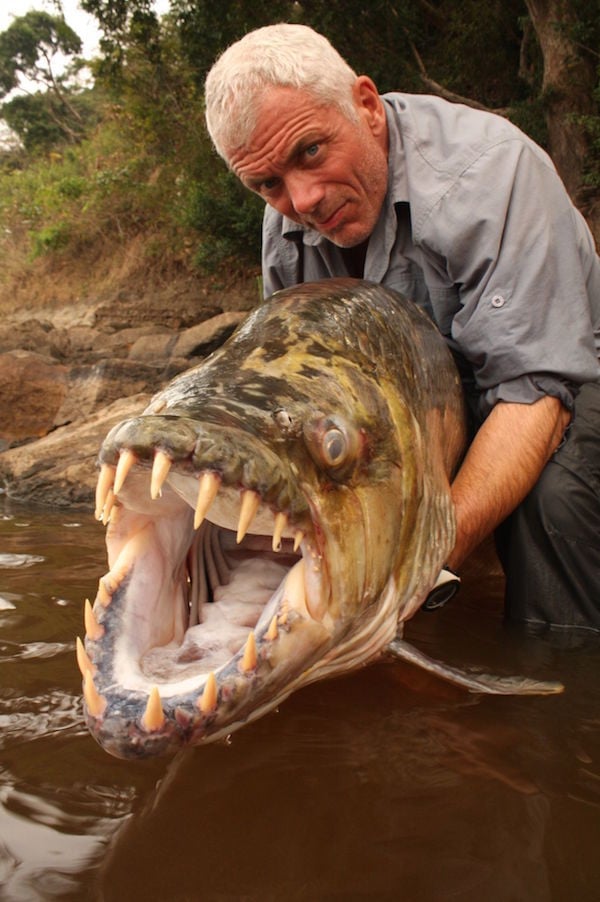 “This fish is only found in the central part of the Congo river system, which is a place where nobody really goes from the outside world, so most people don’t know about it. It’s related to piranhas — it’s a giant piranha, really; they can grow to the size of a large person. The teeth on this one are an inch long, which is about the same size as the teeth on a 1,000-pound great white shark.” 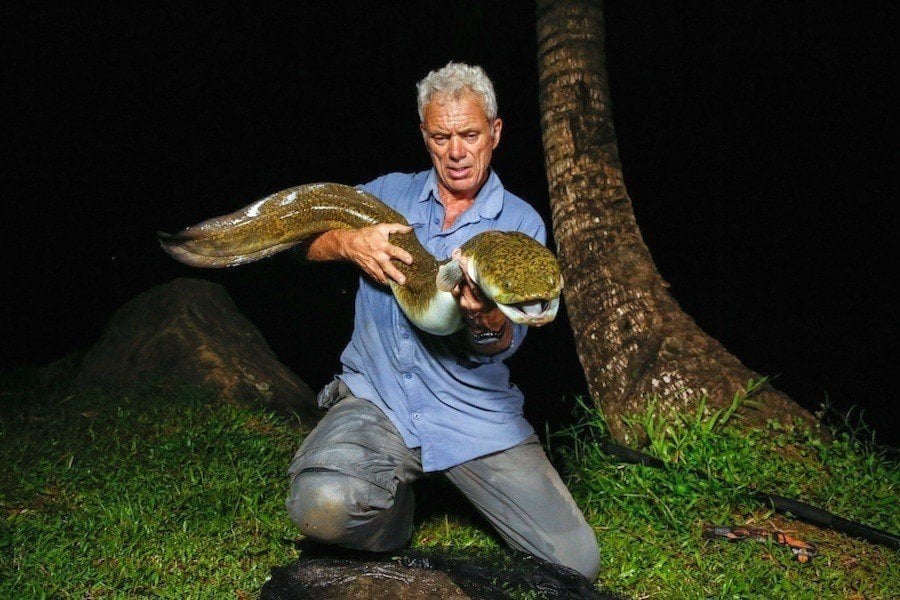 “This was in Fiji. Eels are very interesting — they’re one of the few fish that are able to survive in fresh and salt water, migrating between the two. A lot of people know about salmon swimming into rivers to breed, but these freshwater eels do that in reverse — they live in rivers, but then they go down to the sea to breed. Nobody quite knows where they go.

“There were stories about these eels grabbing people, which is why I was there, investigating. I think they probably have grabbed people, but the reason a lot of fish do that is that they don’t know they’re grabbing a person. If there isn’t good visibility in the water, they just see something in front of their face, which would normally be a small fish. On occasion it might be somebody’s foot, but they don’t know that in advance.” 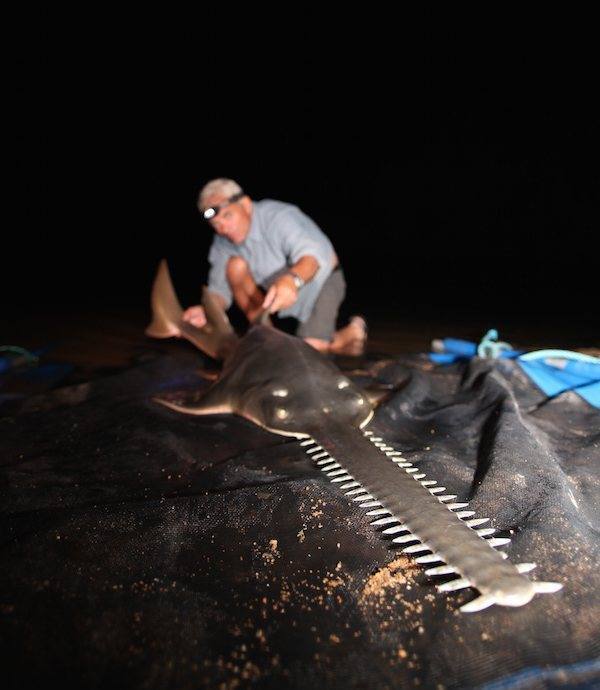 “This is a freshwater sawfish. It’s about seven feet long, but it’s only a juvenile — it’s believed they grow up to 20 feet long, but the adults are never really seen, as they live out in the ocean. This one was in West Australia. Sawfish used to be quite well distributed worldwide, but they’ve declined very sharply because it’s so easy for them to get tangled up in a fishing net. A commercial fisherman is not going to take the time to untangle it, they’ll just kill it.” 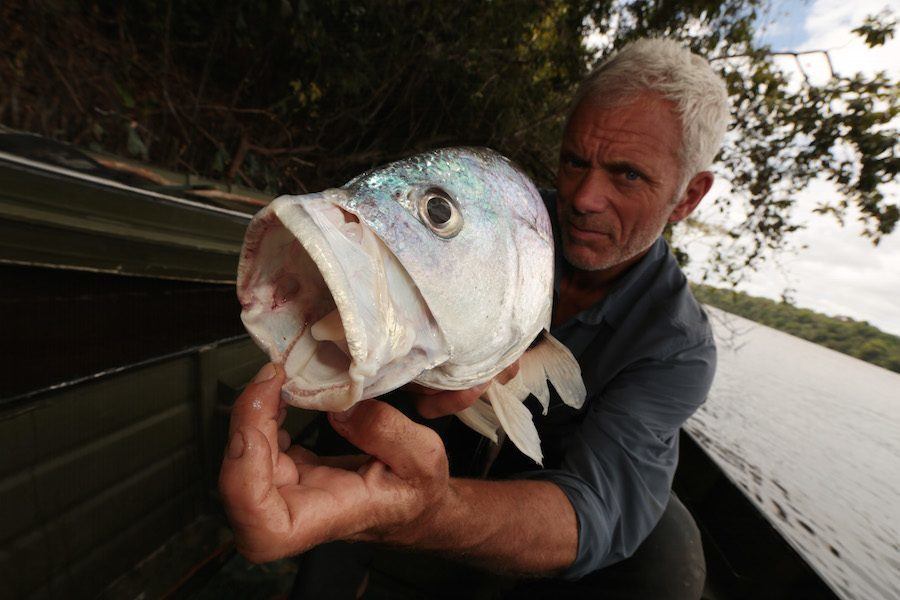 “This is known locally as a Basher in Guyana, which is on the Northern fringe of South America. What’s very interesting about these is that they make a sort of grunting noise under the water — it’s the second weirdest noise in nature, after Howler Monkeys. If you’re in the boat, you’ll hear this growling sound, almost like a kettle boiling. If you didn’t know what it was, you’d think you were having auditory hallucinations.” 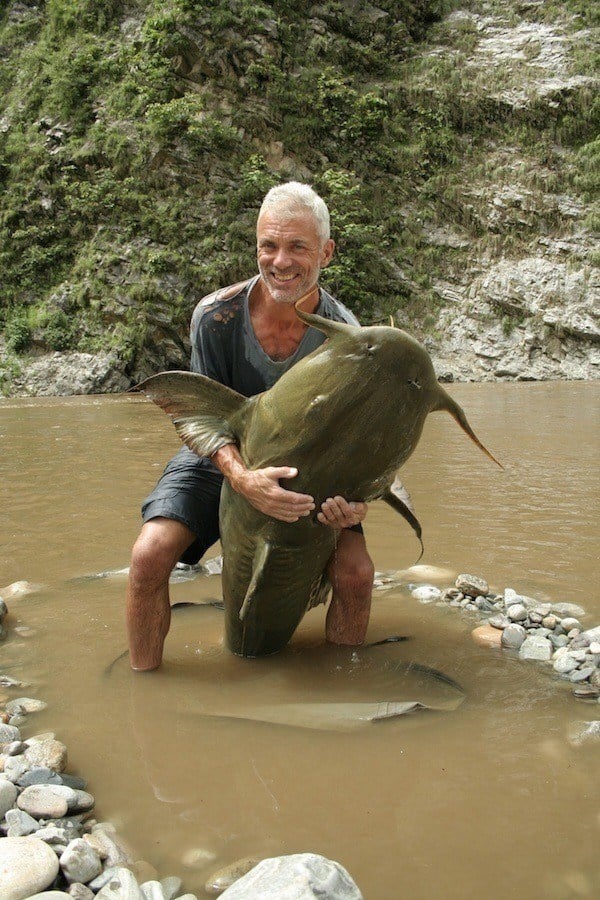 “This is a photo I try to get withdrawn from circulation, because it looks slightly questionable! It’s from India, up in the foothills of the Himalayas, in a tributary of the river Ganges. I’d been hearing these stories about people disappearing, with something pulling them under the water. There are no crocodiles there, and it’s not a python, a river dolphin, or a bull shark, so this was the likely candidate.

“The water’s very muddy, so these fish just grab whatever tends to move in front of their face. Fish tend to do the same as when you throw a dog a bone — it will move to the corner of the room and its basket to avoid competition from other dogs. Fish will often grab something, then turn and head off to deep water. I think that’s what’s going on when someone gets their foot bitten.

“These things don’t have much of a brain, but if it did grab someone’s foot and then swim to deeper water, you’re not going to easily get yourself out of that grip — unusually for catfish, they have very long, pointy teeth and very strong jaws.” 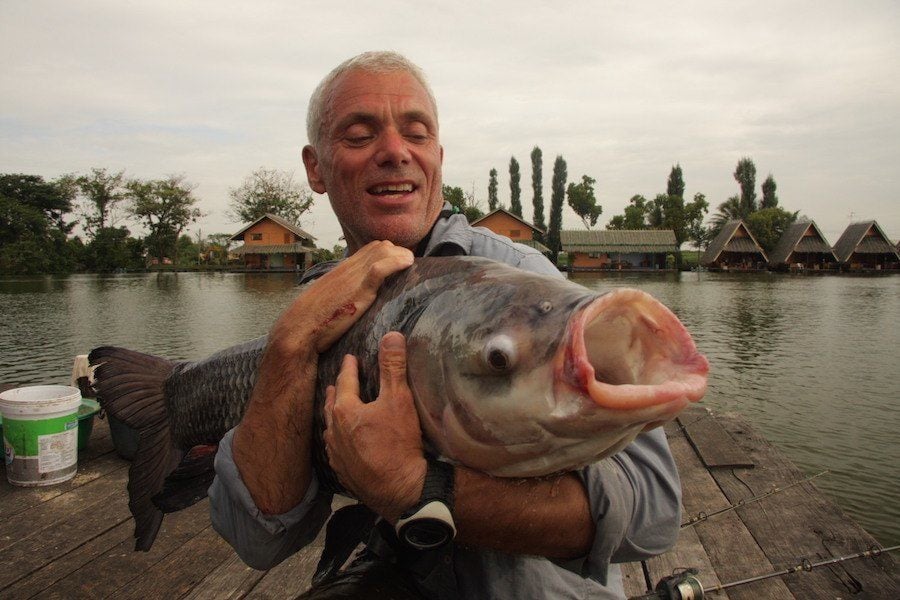 “This was from Thailand, where there are a lot of stocked fisheries — people create a lake and then fill it with species from around the world, you wouldn’t catch these in the wild there. Normally a carp’s mouth droops downwards, as they tend to take things off the bottom, but this is like a carp with its mouth on upside down, which is indicative of feeding on stuff that’s in the middle of the water column, or maybe on the surface. They’re big; they can grow to over 200 pounds.” 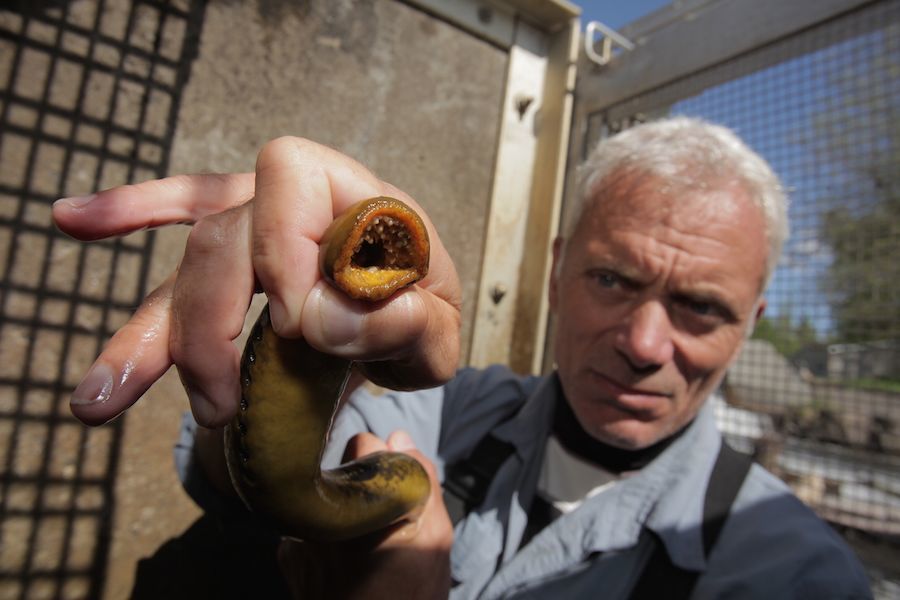 “This was in Lake Champlain, on the border between Vermont and New York. It’s a very primitive fish — there is question as to whether it’s even really a fish, as it has no backbone and no jaws, just a sucker with teeth in it. In the middle of the sucker is a tongue, and the tongue’s got teeth on it as well. The way they normally operate is to bore into the skin of other fish and drink the bodily fluids.

“I had one of these stuck to my neck to experience what it was like. It’s a very strong suction, and if you wait a couple of seconds the teeth will start to penetrate. When you pull them off, you end up with about six inches of skin projecting sideways from your face. Then it leaves an embarrassing mark that you have to explain away to somebody.” 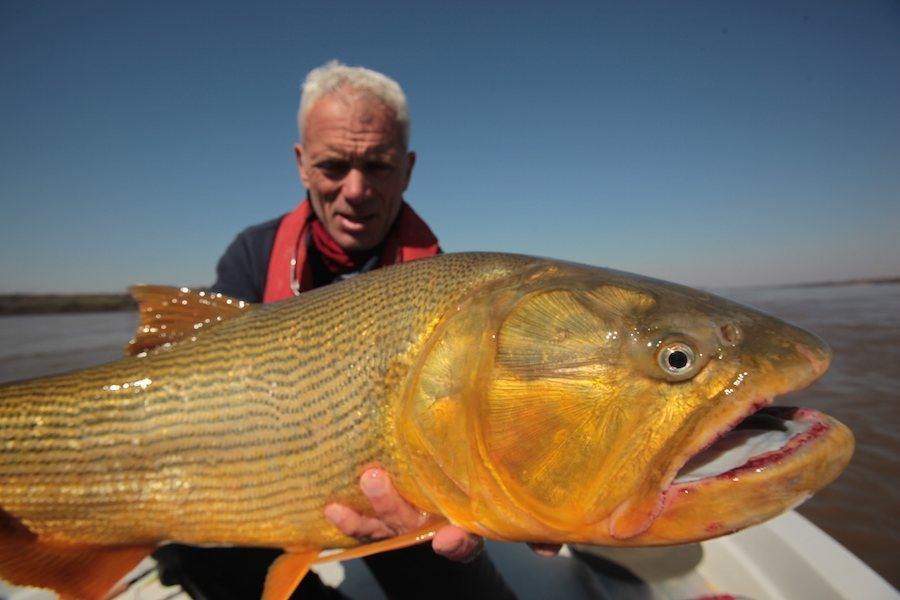 “This was caught in the river between Argentina and Uruguay [Río de la Plata]. They have big, very powerful jaw muscles and teeth. The story we were investigating there was about a young lad who had part of his testicles bitten off, and these were the likely culprit.

“Again, it probably wasn’t intentional — we’re talking low visibility, and people there prepare their fish at the side of the river and throw the guts in. Other fish in the river get used to having a free meal in certain places, so they bite first and ask questions later. When you see something wiggling around under the water, you dive in and take a bite!” 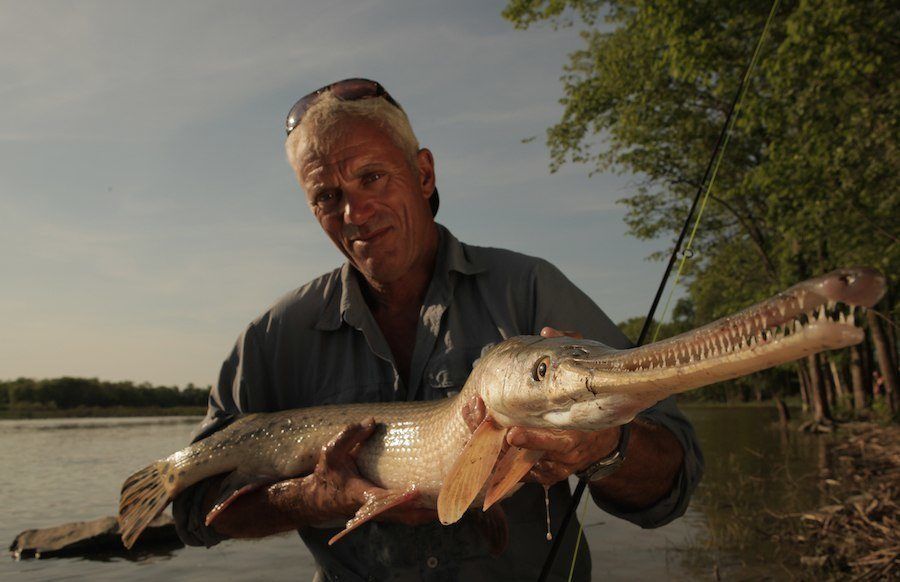 “This is from Lake Champlain. I caught this fly fishing, which is quite weird. It’s a very ancient type of fish. They’re able to come to the surface and gulp air down, which enables them to live in water that’s very poor in terms of oxygen. It’s a survival mechanism that enables them to live in conditions other fish can’t survive.

“These aren’t dangerous to people, but there is a larger species of gar in the US called the Alligator Gar, which grows to at least 300 pounds, and there are stories of people being bitten by them.” 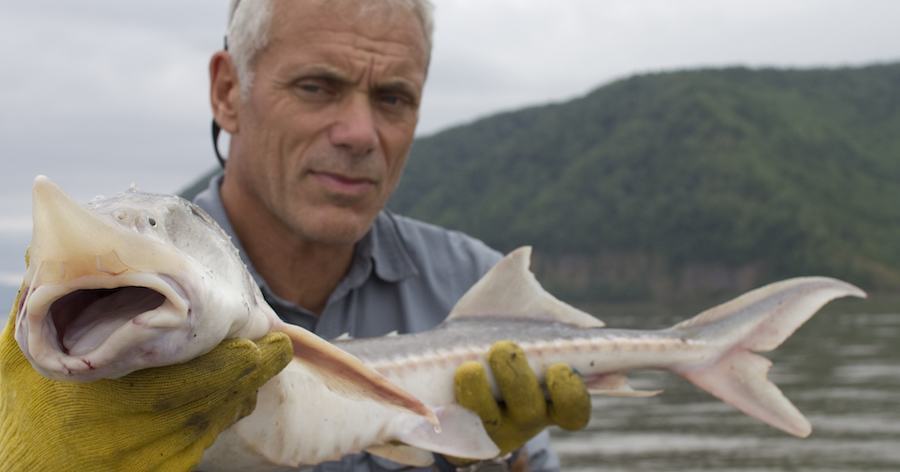 “This was in the Amur river in the far east of Russia. What’s unusual about these is that they’re predatory: A normal sturgeon mouth is just a tube that hangs down to suck things off the bottom, but this one’s mouth extends forwards, like a catfish. These fish are now very scarce because they’re fished for caviar.” 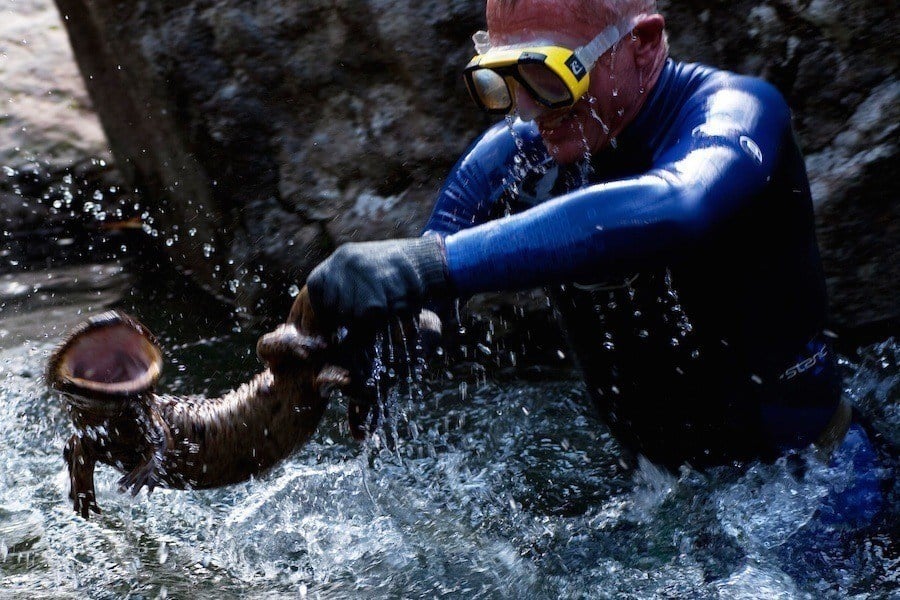 “This is in the Kamo river in Japan. I had it by the tail, but they’re very flexible and I was very worried that it would reach around and bite me — they have immensely sharp teeth. It would be a nasty bite. They don’t encourage you to molest these creatures, they’re quite rare — I was working with a scientist here to help tag them.

“I was especially terrified in that moment because I’d tied a bag of rocks to my waist as a makeshift weight belt, to help me get down to the depth I needed. As I was running to the shore, I felt something banging my legs and completely forgot about it — I was entirely focused on this thing I’m holding. I actually thought something else had come out of the rocks and was coming after me. So I’m screaming this gibberish, which made it very dramatic, but it was just my bag of rocks…” 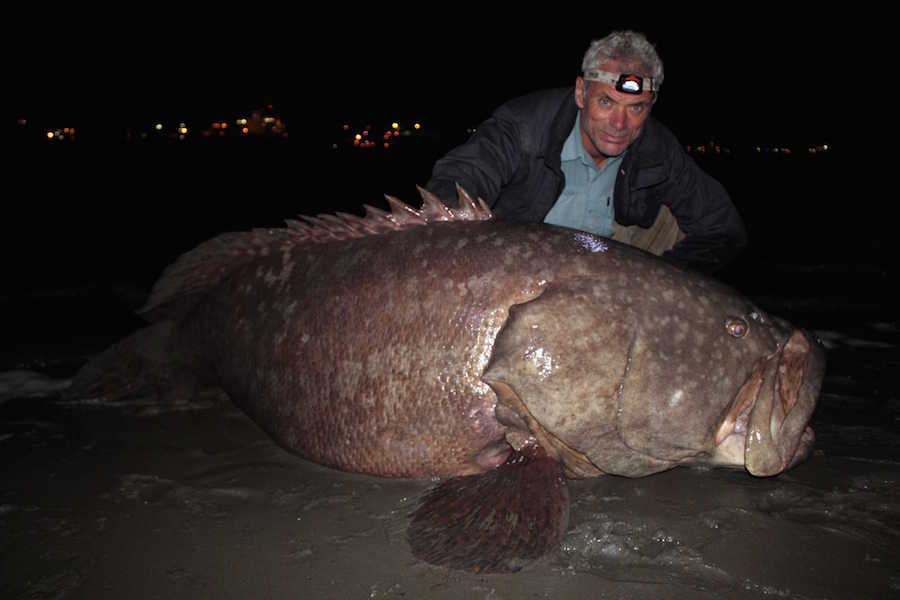 “In polite company, this is called a Grouper, but Australians actually call it a Groper — that’s Australians for you. I was fishing for bull sharks and caught this by accident in the mouth of the Brisbane river. Groupers are one of the [species of] fish that can change sex: they can change from female to male. If there’s one male and lots of females, if the male is removed, one of the females — the biggest, most dominant one — will become a male.” 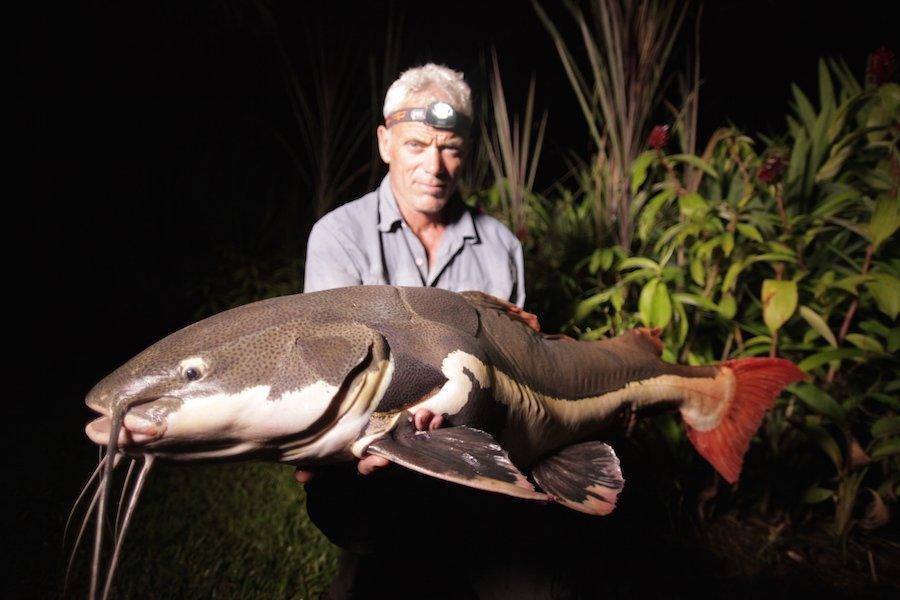 “These are normally found in the Amazon, but this one was caught in a lake in Thailand — they’re really into their exotic fish there. About a third of this fish is head — it’s got a massive head and a very big mouth. In the Amazon, there are stories of these things swallowing babies, thanks to the size of the mouth.” 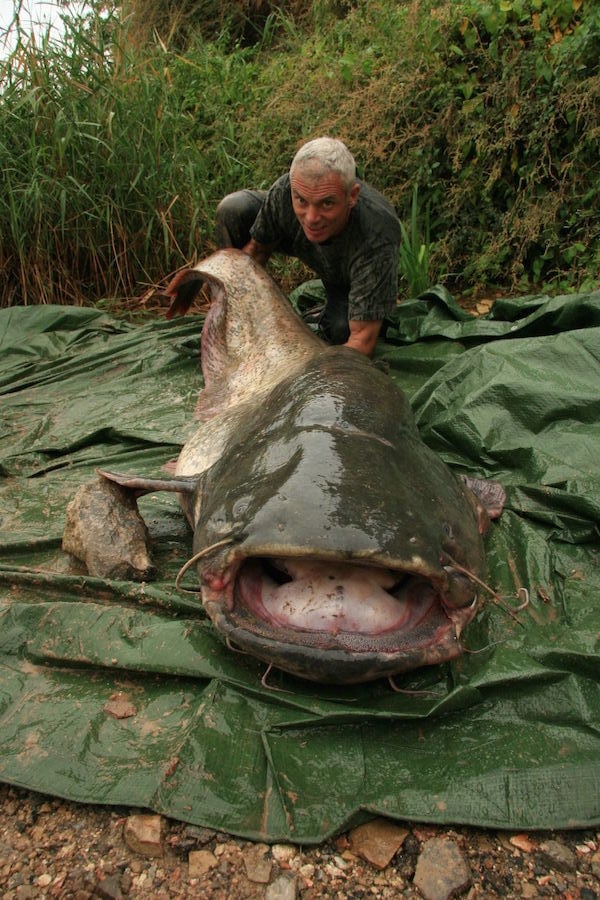 “This lives in Europe, which is quite a surprise. People tend to think that all these giant fish live in exotic, faraway places, but I caught this in Spain. It’s probably 160 lb. and seven feet long. It has a very distinctive bite mark — the teeth are small but close together, so it looks like a file, and they will leave a slightly curved, bleeding mark on the leg, maybe ten inches long.

“The interesting thing about these fish is that they’ve been known to bite people even when the water’s clear and they can see that it’s a person. The reason is because they’re defending their nests very vigorously. If someone swims too near the nest, they’ll bite just to warn them off. For people who it’s happened to, it’s pretty terrifying, because of the shock, the pain, and not knowing what on Earth bit them.”