Weighing in at more than 6,000 pounds and 11 feet long, this giant sunfish found near the Azores is the largest bony fish ever caught. 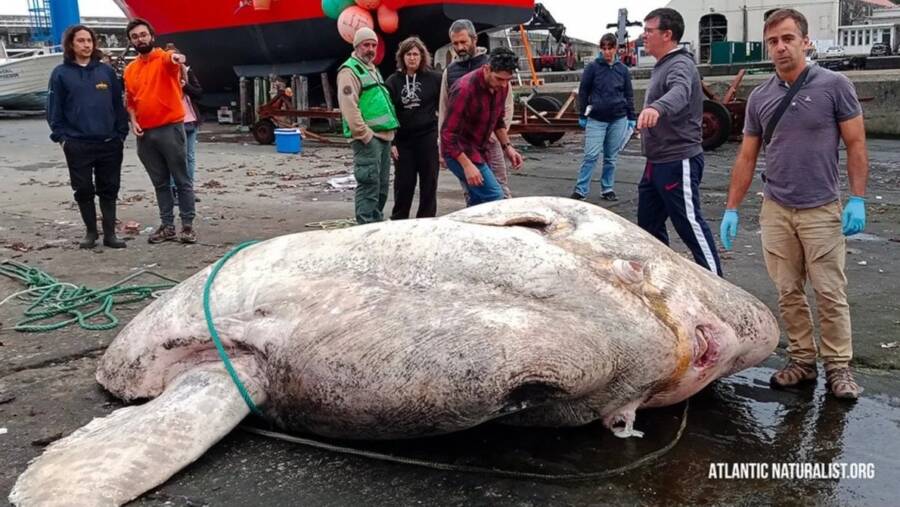 Researchers in Portugal have made a monster discovery. While at work off the coast of the Azores, they reeled in a mammoth sunfish which, at over 6,000 pounds, is the biggest fish ever caught.

This titanic find offers a fascinating look at these gentle giants, best known for floating on the ocean’s surface to warm their bodies. So how did this sunfish end up in the hands of Portuguese researchers?

Discovering The Biggest Fish Ever Caught

According to Live Science, the carcass of the dead sunfish was discovered on Dec. 9, 2021, off the coast of Faial Island in the Azores. IFL Science reports that the Rede de Arrojamentos de Cetáceos dos Açores (an organization that helps stranded marine animals) lugged the fish aboard.

The organization brought the giant sunfish (Mola alexandrini) to land where it was weighed with the help of a forklift. According to a study recently published in the Journal of Fish Biology, the sunfish weighed in at an astonishing 6,049 pounds. Researchers also determined that the monstrous sunfish was about 12 feet tall and around 11 feet long.

This makes it the largest bony fish ever caught. 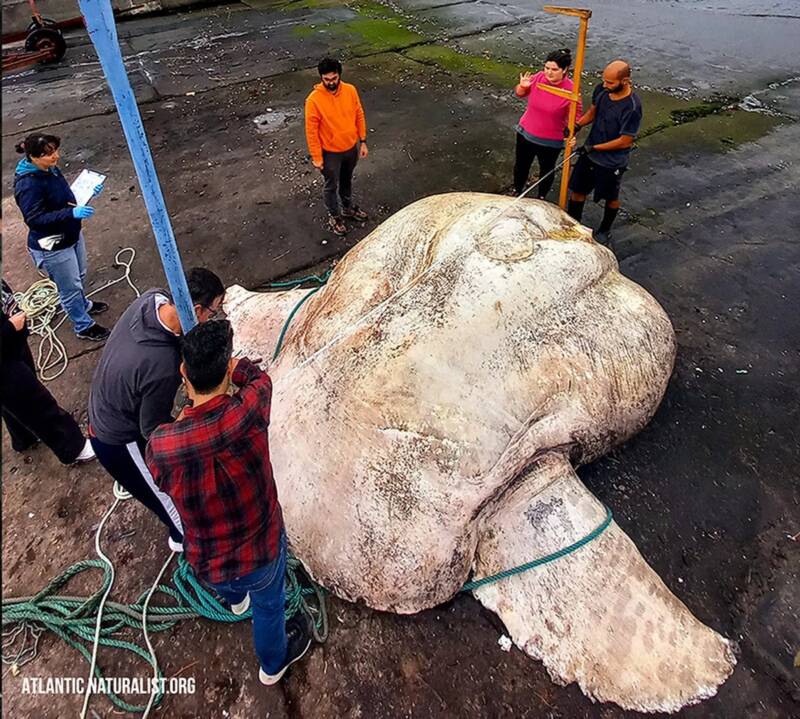 Atlantic Naturalist AssociationResearchers had to use a forklift to determine that this sunfish was the biggest fish ever caught.

“The M. alexandrini reported here is the heaviest extant teleost specimen reported to date,” the researchers wrote in their study. Study lead author José Nuno Gomes-Pereira additionally described the fish as a “majestic specimen” to Live Science and noted that it must have been an incredible sight to behold while it was alive and swimming through the water.

Indeed, the Portuguese sunfish is nearly 1,000 pounds heavier than the former record holder. As Live Science reports, the record for the heaviest bony fish was previously held by a sunfish caught off the coast of Kamogawa, Chiba, Japan, in 1996. That fish weighed about 5,070 pounds.

For now, researchers aren’t entirely sure what killed the giant Portuguese sunfish. However, according to the Daily Mail, they did note that the fish had a large cylindrical depression on its head. They also found traces of red paint in the depression, suggesting that the fish may have been struck by a boat.

“It is however not clear if the impact occurred pre or post-mortem, and therefore the cause of death remains uncertain,” the researchers noted.

The sunfish in Portugal may be the biggest fish ever caught, but what exactly do scientists know about these gentle giants?

What Are Sunfish, The Largest Bony Fish In The World? 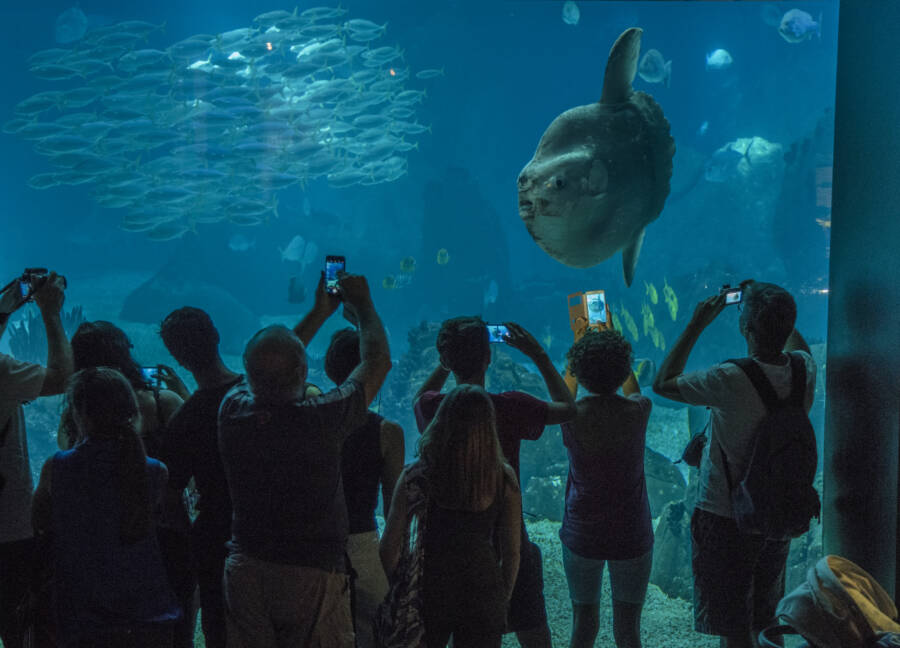 Horacio Villalobos – Corbis/Corbis via Getty ImagesVisitors peer up at a sunfish at the Lisbon Oceanarium in Lisbon, Portugal, in 2017.

As Live Science notes, the fish aren’t named for their circular shape, but rather for their habit of basking in the sun at the ocean’s surface. Newsweek reports that the fish lie in the sun to warm themselves after diving deep in the cold ocean in search of food. Because they have no tails, sunfish use their top and bottom fins to swim up to 16 miles per day.

Though the fish can grow to impressive sizes, IFL Science also reports that they start out about as small as a piece of popcorn. Indeed, researchers have hypothesized that sunfish grow so large so that they can produce scores and scores of offspring.

“Why [they are] so large [is] unclear, but they produce many offspring (100s of thousands) so possibly selection for more eggs has driven body size,” David J. Booth, a Professor of Marine Ecology at the University of Technology Sydney, told Newsweek. 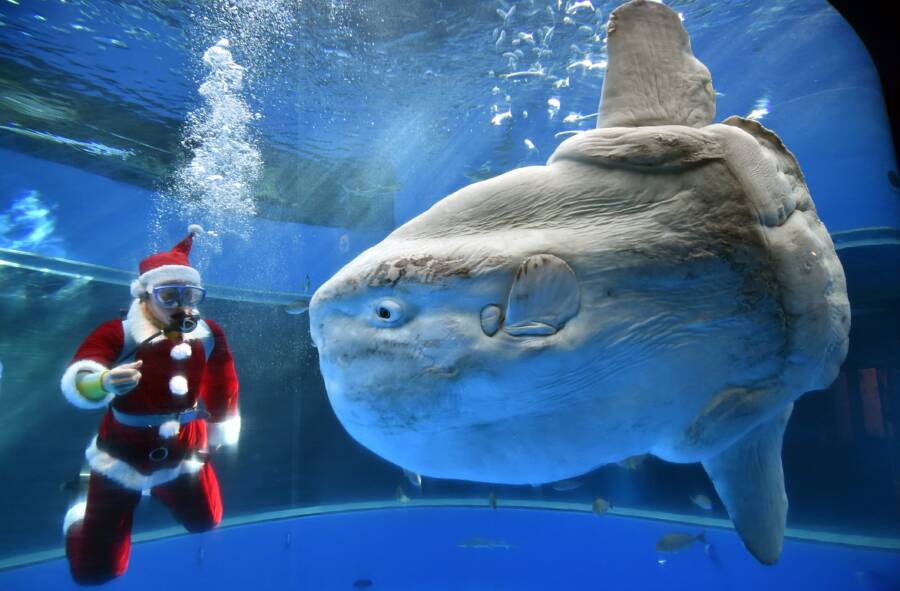 YOSHIKAZU TSUNO/AFP via Getty ImagesA diver wearing a Santa Claus costume feeds a sunfish at the Hakkeijima Sea Paradise aquarium in Yokohama, Japan, in 2014. Researchers still have much to learn about sunfish, which are among the biggest fish ever caught.

That said, there’s still a lot that scientists don’t know about the biggest fish ever caught. As Newsweek notes, giant sunfish (M. alexandrini) were until recently thought to be the same species as ocean sunfish (Mola mola).

Furthermore, ocean sunfish are categorized as “vulnerable” on the International Union for the Conservation of Nature (IUCN) Red list. Newsweek reports that they’re considered a delicacy in Asian countries like Taiwan and Japan, and are often caught and de-finned by fishermen who want to use them as bait.

However, it’s unclear if M. alexandrini face the same dangers. Indeed, Live Science reports that though giant sunfish are thought to exist across the globe, scientists aren’t sure how many exist.

“They are widespread but rare in any particular location,” Booth explained to Newsweek. “We have seen them at 400 meters eating off oil and gas infrastructure.”

For now, giant sunfish seem to be just one more of the ocean’s many mysteries. The giant sunfish discovered off the coast of Portugal may be the biggest fish ever caught, but who knows what other majestic monsters may be swimming through the ocean depths?

After reading about the biggest fish ever caught, discover the oarfish, the world’s longest bony fish. Then, read up on the alligator gar, the 100-million-year-old “megafish.”