The Twisted History Of Lake Lanier, The ‘Haunted’ Georgia Reservoir With A Racist Past

Constructed right atop the historically Black town of Oscarville, Georgia in 1956, Lake Lanier has become one of the most dangerous bodies of water in America — with the remains of buildings just below the surface ensnaring hundreds of boats and swimmers. 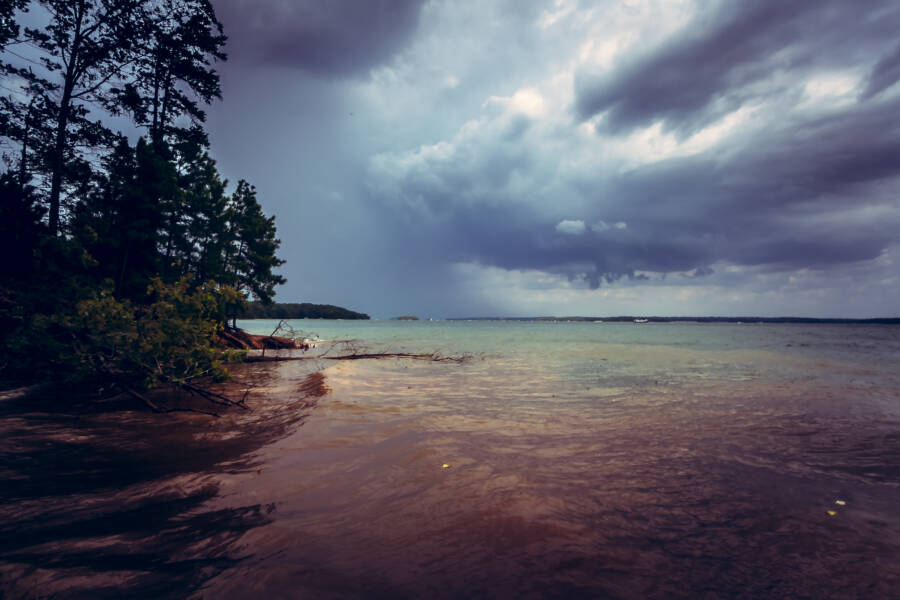 Joanna Cepuchowicz/EyeEm/Getty ImagesAt the bottom of Lake Lanier sits the former town of Oscarville, whose Black citizens were driven out in order to make the reservoir.

Each year, more than 10 million people visit Lake Lanier in Gainesville, Georgia. Though unsuspecting the massive, placid lake might look, it’s considered one of the deadliest in America — indeed, there have been 700 deaths at Lake Lanier since its construction in 1956.

This shocking number of accidents at the lake has led many to theorize that the site may, in fact, be haunted.

And given the controversial circumstances surrounding Lake Lanier’s construction and a history of racial violence in the ruins of the former town of Oscarville that lie beneath the lake’s surface, there might be some truth to this idea.

How The Deaths At Lake Lanier Reveal A Controversial Past

In 1956, the United States Army Corps of Engineers was tasked with creating a lake to provide water and power to parts of Georgia and help to prevent the Chattahoochee River from flooding.

They chose to construct the lake near Oscarville, in Forsyth County. Named after the poet and Confederate soldier Sidney Lanier, Lake Lanier has 692 miles of shoreline, making it the largest in Georgia — and far, far larger than the town of Oscarville, which the Corps of Engineers forcefully emptied so that the lake could be built.

In total, 250 families were displaced, roughly 50,000 acres of farmland were destroyed, and 20 cemeteries were either relocated or otherwise engulfed by the lake’s waters over its five-year construction period.

The town of Oscarville, however, was strangely not demolished before the lake was filled, and its ruins still rest at the bottom of Lake Lanier.

Divers have reported finding fully intact streets, walls, and houses, making it the single most dangerous underwater surface in the United States. 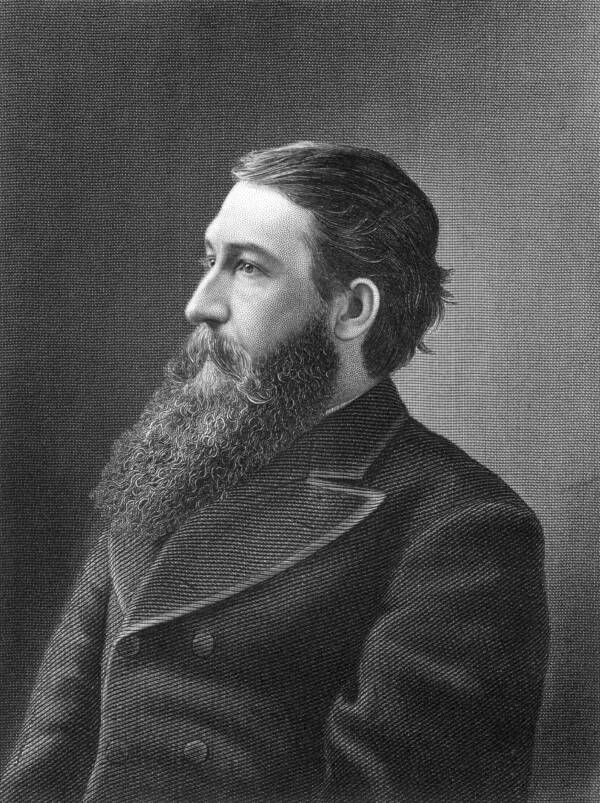 Hulton Archive/Getty ImagesSidney Lanier, American poet, Confederate, flutist, and author for whom the lake is named.

The flooded structures, coupled with declining water levels, are presumed to be a major factor in the high number of deaths that occur yearly at Lake Lanier, catching swimmers and holding them under or damaging boats with debris.

The deaths at Lake Lanier aren’t the typical sort, though. While there are many instances of people drowning, there are also reports of boats randomly going up in flames, freak accidents, missing persons, and inexplicable tragedies.

Some believe the region’s dark past is responsible for these incidents. Legend asserts that the vengeful and restless spirits of those whose graves were flooded — many of whom were Black or persecuted and driven out by violent white mobs — are behind this curse.

The Racist History Of Lake Lanier

The town of Oscarville was once a bustling, turn-of-the-century community and a beacon for Black culture in the South. At the time, 1,100 Black people owned land and operated businesses in Forsyth County alone.

But on Sept. 9, 1912, an 18-year-old white woman named Mae Crow was raped and murdered near Browns Bridge on the Chattahoochee River banks, right by Oscarville.

According to the Oxford American, Mae Crow’s murder was pinned on four young Black people who happened to live in the area nearby; siblings Oscar and Trussie “Jane” Daniel, only 18 and 22 respectively, and their 16-year-old cousin Ernest Knox. With them was Robert “Big Rob” Edwards, 24.

A day later, a white mob invaded Edwards’ jail cell. They shot him, dragged him through the streets, and hanged him from a telephone pole outside the courthouse.

A month later, Ernest Knox and Oscar Daniel appeared in court for the rape and murder of Mae Crow. They were found guilty by the jury in just over an hour.

Some 5,000 people gathered to watch the teenagers be hanged.

Trussie Daniel’s charges were dismissed, but it’s widely believed that all three boys were innocent of the crimes. 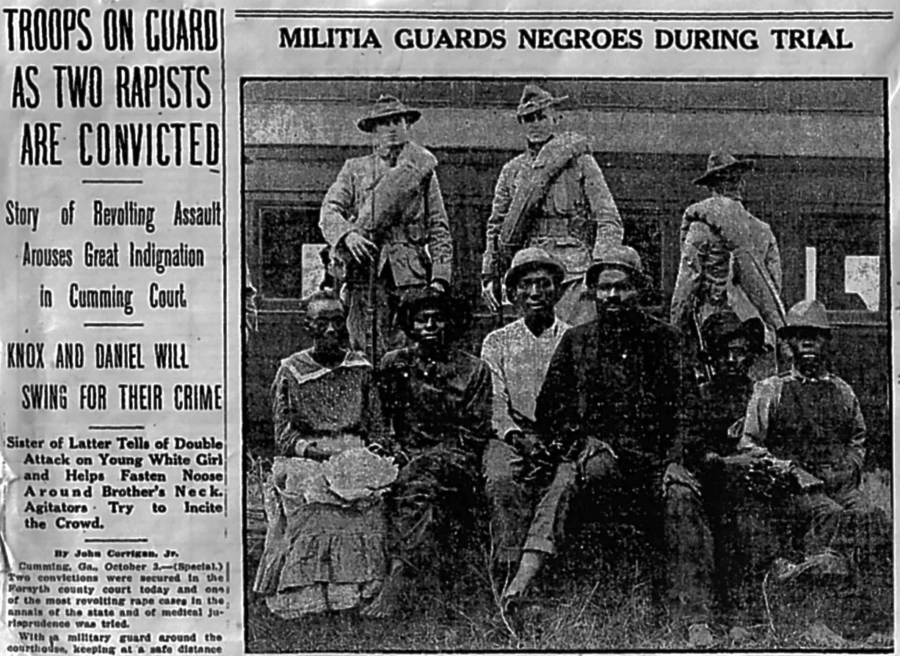 Public DomainThe newspaper headline that ran during the trial of Oscar Daniel and Ernest Knox, “Troops On Guard As Two Rapists Are Convicted,” accompanied by the heading, “Knox and Daniel Will Swing For Their Crime.”

As Narcity reported, to this day less than five percent of Forsyth County’s population is Black.

But perhaps Lake Lanier is haunted by some other force?

The Legends Of The “Haunted” Lake Lanier

The most popular legend surrounding Lake Lanier is called “The Lady of the Lake.”

As the story goes, in 1958, two young girls named Delia May Parker Young and Susie Roberts were at a dance in town but had decided to leave early. On the way home, they stopped to get gas — and then left without paying for it.

They were driving across a bridge over Lake Lanier when they lost control of the car, spiraling off the edge and crashing into the dark waters below.

A year later, a fisherman out on the lake came across a decomposed, unrecognizable body floating near the bridge. At the time, no one could identify who it belonged to.

It wasn’t until 1990 when officials discovered a 1950s Ford sedan at the bottom of the lake with the remains of Susie Roberts inside, that they were able to identify the body found three decades earlier as Delia May Parker Young’s.

But locals already knew who she was. They had reportedly seen her, still in her blue dress, wandering near the bridge at night with handless arms, waiting to drag unsuspecting lake-goers to the bottom. 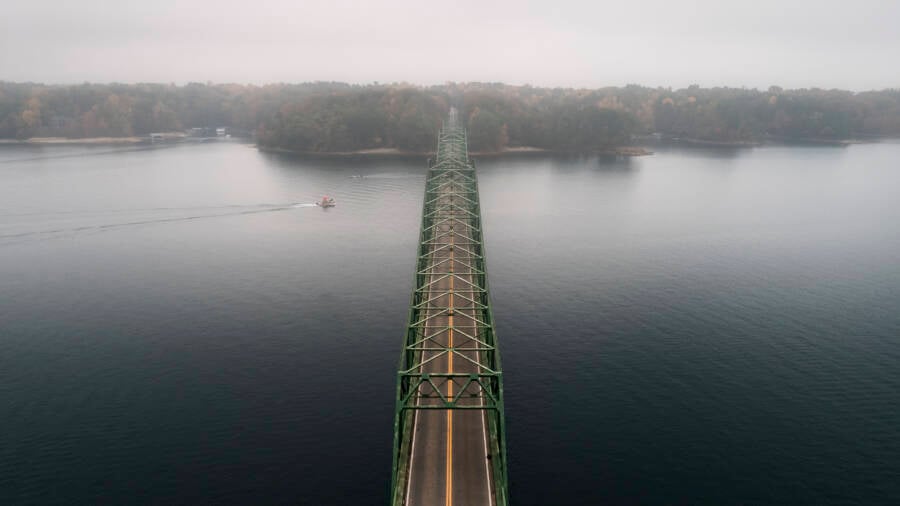 Cavan Images/Getty ImagesBrowns Bridge over Lake Lanier, where Delia May Parker Young and Susie Roberts spiraled out of control and fell into the lake.

Other people have reported seeing a shadowy figure sitting on a raft, inching himself across the water with a long pole and holding up a lantern to see.

Recent Deaths At The Eerie Reservoir

Besides these ghost stories of yore, there are those who claim that the lake is haunted by the spirits of the 27 victims who have died in Lake Lanier over the years, but whose bodies were never found.

In the end, though, ghost stories are perhaps nothing more than a fun way to write off an otherwise tragic history littered with racist violence as well as unsafe and poorly planned construction.

Regardless of its size, for 700 people to have died in the lake in less than 70 years, something must be wrong. The Army Corps of Engineers initially believed that the submerged town of Oscarville wouldn’t cause any harm, but the lake also wasn’t constructed to be recreational — it was meant to supply water from the Chattahoochee River to towns and cities in Georgia.

Many of the deaths can likely be attributed to things as simple as not wearing a life jacket, drinking alcohol while out on the lake, accidents, or incorrectly assuming that shallow water is always safe.

Perhaps the only thing that truly haunts Lake Lanier is its bigoted history.

After reading about the deaths at Lake Lanier and the history of the lake, learn about Ohio’s Franklin Castle and how it became a house of horrors. Then, see the twisted, dark history of the Myrtles Plantation in Louisiana.