The Tragic History Of Franklin Castle, Ohio’s Most ‘Haunted’ Home

Built by Hannes Tiedemann in 1881, Franklin Castle was supposed to be a dream home for an immigrant family — but quickly devolved into a house of horrors.

With its elegant turrets and brick-red window frames, Franklin Castle exudes turn-of-the-century charm. But this Cleveland, Ohio, mansion has a dark past, and today, it’s considered one of the most haunted houses in the United States.

Built in the 1880s by a German immigrant, the house swiftly became the site of multiple tragedies. While some have attributed the house’s deaths to bad luck, others claim that something much more sinister was at play.

To date, people have described hearing crying babies, seeing a woman standing in the window, and feeling cold in a certain room. Even paranormal investigators have visited the house in hopes of spotting a ghost.

So, what happened at Franklin Castle to make it so haunted?

The Tragedies Of Hannes Tiedemann

The story of Franklin Castle starts on a hopeful note. The mansion was constructed by Hannes Tiedemann, a German immigrant who seemed to have achieved the American dream. 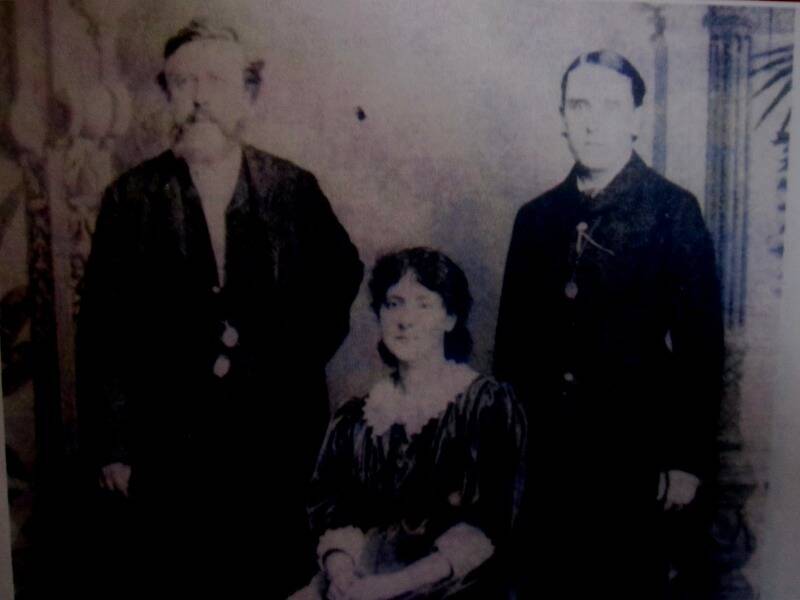 Cleveland HistoricalHannes and Louise Tiedemann with their son, August. Circa 1880s.

Tiedemann had made his fortune as a wholesaler grocer and then as the co-founder of Union Banking & Savings Co. Flush with cash, he decided to build a mansion on Cleveland’s ritzy Franklin Boulevard.

The banker wanted a house both big enough for his family and large enough to temporarily house other German immigrants. To that end, Tiedemann tapped the prestigious firm Cudell and Richardson, who designed a striking, four-story, 20-room mansion. Tiedemann proudly dubbed his new home “Franklin Castle.”

Sadly, it wasn’t long before tragedy struck. In January 1881, shortly after the family had moved in, Tiedemann’s 15-year-old daughter Emma died of diabetes. Soon afterward, his mother Wiebeka also died. And between 1886 and 1888, Tiedemann and his wife buried three more children while under their opulent roof at Franklin Castle.

Finally, after Tiedemann’s wife died in 1895 of liver disease, Tiedemann remarried and sold his mansion to a German family named Mullhauser. He himself died of a stroke some 13 years later while walking in the park.

But that wasn’t the end to the devastation seen at Franklin Castle — in fact, it was just the beginning.

Inside The Hauntings At Franklin Castle

Franklin Castle began to develop its unconventional reputation in the 1920s. After it was sold by Mulhauser to the German Socialist society, the castle allegedly became the site of illegal liquor production during Prohibition and a nest for Nazi spies during World War II. 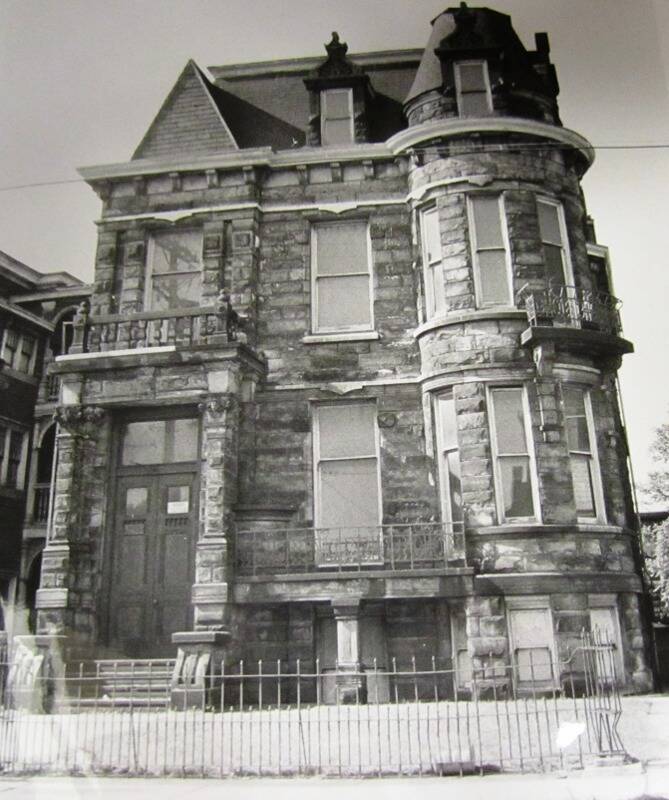 Reports of hauntings, however, didn’t begin until the 1960s. By then, a family with six children called the Romanos had moved into the house and were hoping to turn it into a restaurant. They instead found themselves battling ghosts.

The hauntings allegedly began right away. On the day the Romanos moved in, two of their children said they’d encountered a crying girl in white on the third floor. But when Mrs. Romano investigated, no one was there.

Soon, the family started hearing haunting organ music and heavy footfalls. Two of the older Romano children woke up one night to find something yanking the blankets off their bed. And Mrs. Romano once awoke to find herself screaming on her bedroom floor, with an unseen presence screaming beside her.

A priest advised the Romanos to move out, and in 1974, they did. Mrs. Romano said the house was “getting the best of her.” She suspected that she’d been haunted by Louise Tiedemann and that the crying girl in white was Tiedemann’s daughter, Emma.

But the hauntings didn’t stop when the Romanos left. The new owner, Sam Muscatello, tried to capitalize on the house’s reputation by inviting local media to check out Franklin Castle. Many of them had strange experiences while exploring its grounds. 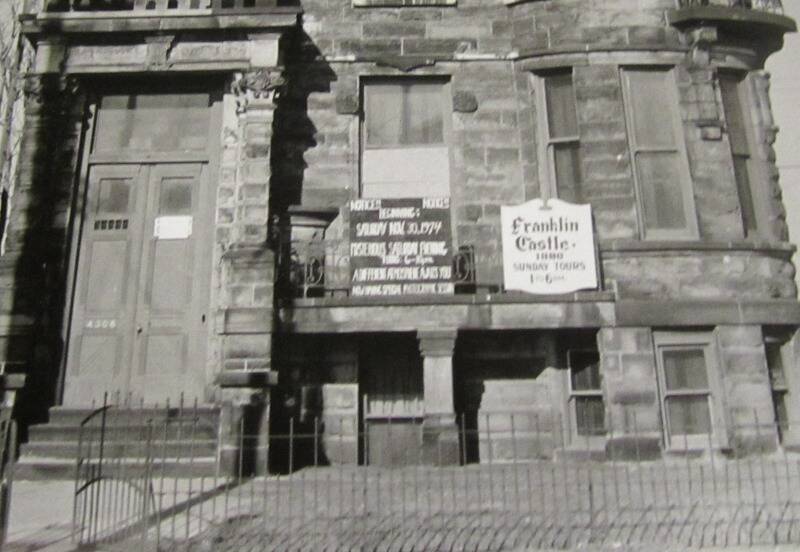 Cleveland Public LibraryOne of Franklin Castle’s owners advertised it as being haunted, and some members of local media reported strange encounters there.

A Cleveland radio host named John Webster, for instance, described how something snatched his tape recorder and threw it down the stairs. “I just stood there holding the microphone as I watched the tape recorder go flying down to the bottom of the stairs, where it broke into pieces,” he recalled.

From there, the house was sold again — and again and again. Each new occupant reported strange occurrences like passing through odd vapors, hearing a child crying, or seeing a woman in black standing in the window. And as reports of hauntings at Franklin Castle increased, many turned their suspicion on its original owner.

Tragedy had stalked Hannes Tiedemann. While living in the house, he’d lost his mother, children, and wife. But what if he’d had a hand in their deaths?

Suddenly, Emma and Louise’s deaths looked more suspicious. Stories spread that Tiedemann had even murdered his niece by hanging her from the rafters, and killed his mistress in a jealous rage.

But how much of that is true?

Investigating The Grim History Of The Tiedemann House

Today, Franklin Castle’s legend has grown to such a proportion that it’s considered one of the most haunted houses in the United States. But was Hannes Tiedemann a brute who slowly and steadily murdered his entire family?

One man has said no. William Krejci, a Cleveland author and investigative historian who wrote a book on Franklin Castle called Haunted Franklin Castle, believes that the stories about Hannes Tiedemann’s cruelty have been embellished over time.

“They were very kind people. Mr. Tiedemann was a benefactor of the community,” Krejci explained. “[Hannes Tiedemann] was a generous man. He gave often to various charities. He was not the monster that has been made out in all these stories about the castle. There’s just no truth to that.” 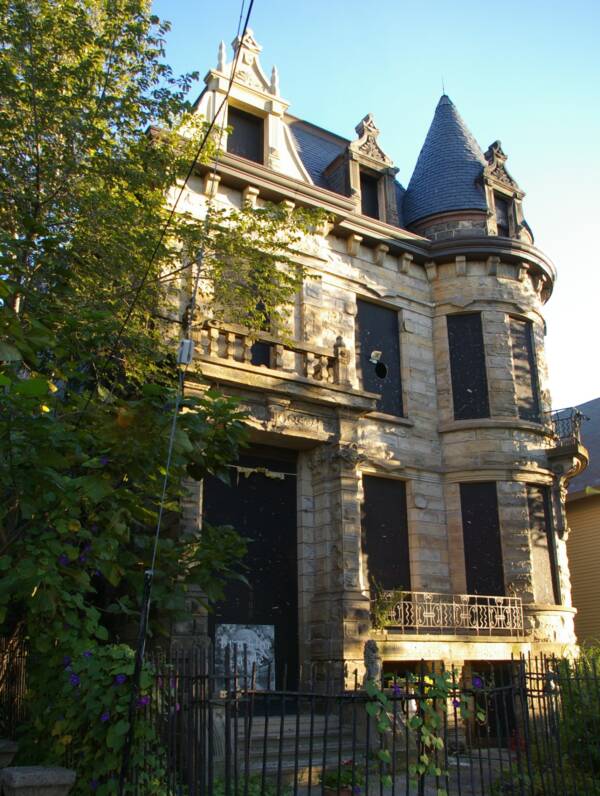 None of the recorded deaths at Franklin Castle were foul play, Krejci added. “All this makes for a fantastic ghost story and who doesn’t love a good ghost story,” he wrote. “There’s just one problem. Hardly any of this is true.”

That said, Krejci didn’t entirely disagree that Franklin Castle is haunted. When he visited the house himself, he had a number of strange experiences.

“Small stuff,” Krejci said. “Footsteps, voices and/or the radio turning on, on my phone. Things like that. It’s kind of cool, actually.”

Today, Franklin Castle is a private residence. Its current owners are mum on any recent hauntings, but the house does remain a popular stop on Cleveland ghost tours. Though it’s only viewable from the outside, haunting aficionados claim that the ghost of Louise Tiedemann can be seen standing in the window.

In that way, Franklin Castle will keep its secrets. Its soaring turrets, delicate details, and striking windows might mask horrific crimes. Or, they may simply symbolize how one immigrant’s American dream became a devastating nightmare.

After reading about Franklin Castle, learn about the tragic history of Boldt Castle. Or, look through these real haunted houses in America.