Inside The True Story Behind King Tut’s Mask

King Tutankhamun's mask was first unearthed when Howard Carter opened the Egyptian pharaoh's coffin in 1925 — and some believe that the ancient tomb unleashed a curse.

When British archeologists cracked open Tutankhamun’s gold coffin in 1925, they found themselves face-to-face with the unseeing eyes of the boy king’s death mask. Since then, King Tut’s mask has fascinated the world. 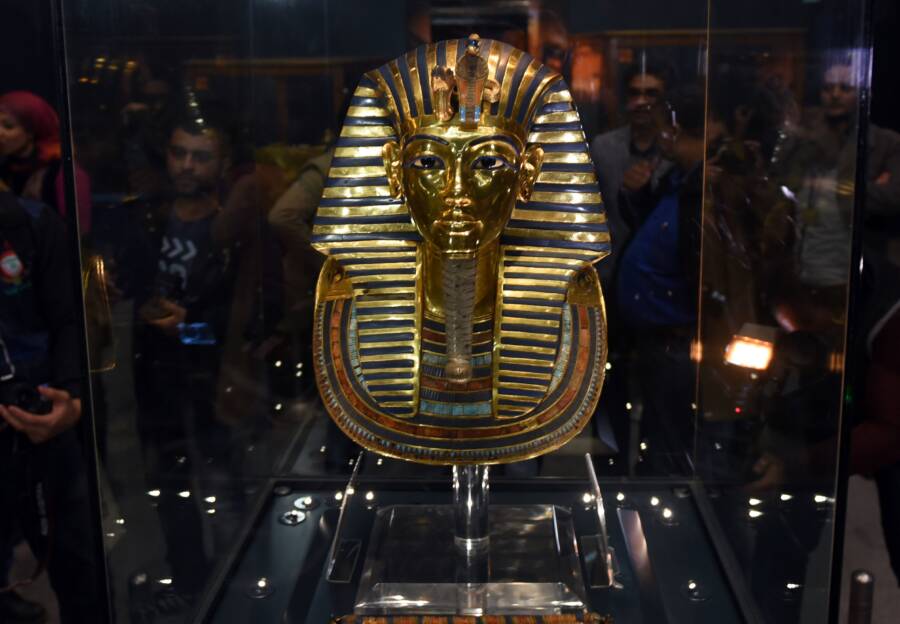 MOHAMED EL-SHAHED/AFP via Getty ImagesKing Tut’s mask on display at the Egyptian Museum in Cairo, Egypt, in 2015.

With its proud posture, tranquil gaze, and shimmering flesh, the mask offers a rare peek into life in ancient Egypt. It speaks to a lost culture’s traditions, beliefs, and artistic abilities.

So, who was the boy-king immortalized in gold? How did archeologists come across his tomb? And why do some think that the mask was meant for someone else?

The Discovery Of King Tut’s Mask

By 1922, Howard Carter’s investors were getting impatient. The British archeologist had scoured Egypt’s Valley of the Kings for eight years but had not found anything significant.

With time running through his fingers like Egyptian sand, Carter began his search with new intensity. By November 1922, his efforts bore fruit when he found a set of hidden stairs. Carter promptly wired Carnarvon, and the two men prepared to break into King Tut’s tomb buried underground. 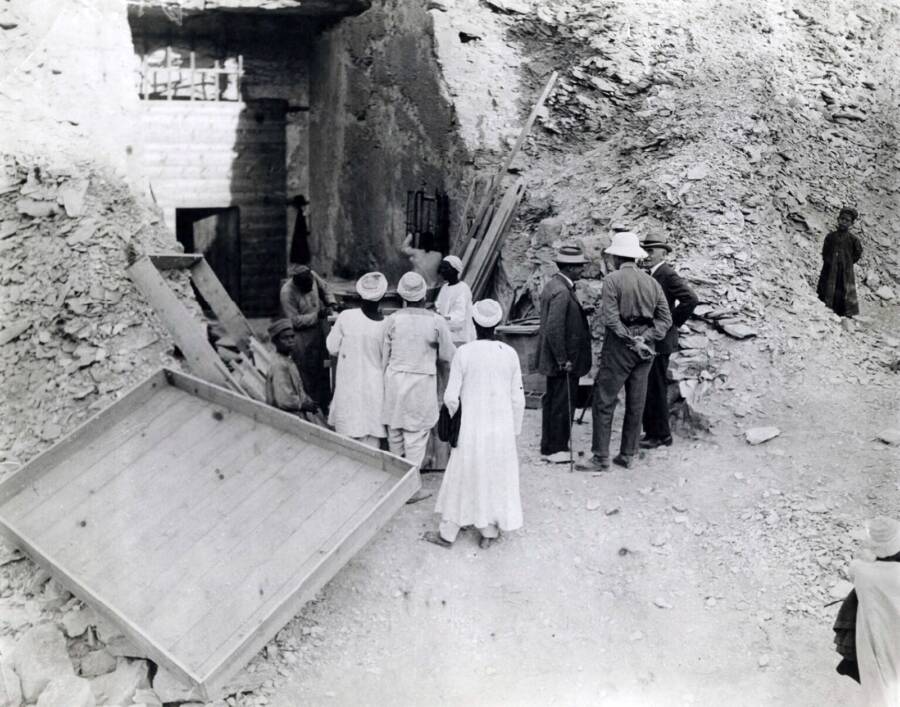 “There before us lay the sealed door, and with its opening, we were to blot out the centuries and stand in the presence of a king who had reigned 3,000 years ago,” Carter later wrote.

“My own feelings as I mounted the platform were a strange mixture, and with trembling hand I struck the first blow.”

With Carter leading the way, the two men stepped across the threshold and into the dark, stuffy air.

“At first I could see nothing, the hot air escaping from the chamber causing the candle flame to flicker,” Carter recalled, “but presently, as my eyes grew accustomed to the light, details of the room within emerged slowly from the mist, strange animals, statues, and gold — everywhere the glint of gold.”

From behind him, Carnarvon asked if he could see anything. The ebullient Carter cried back, “Yes, wonderful things!” 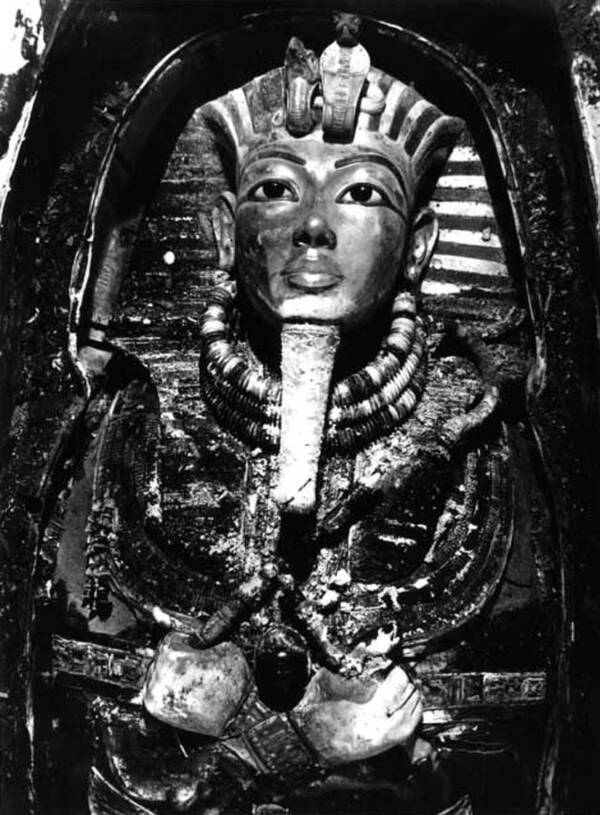 Of all the “wonderful things” they found, however, one certainly stood out — a golden coffin. Three years later, after exhaustively documenting thousands of grave objects, Carter prepared to open it for the first time in over 3,000 years.

“The penultimate scene was disclosed,” Carter wrote in his diary after opening the coffin and discovering King Tut’s mask.

“A very neatly wrapped mummy of the young king, with a golden mask of sad but tranquil expression … the mask bears God’s attributes, but the likeness is that of Tut.Ankh.Amen — placid and beautiful, with the same features as we find upon his statues and coffins.”

Further study revealed that King Tut’s mask was made of two types of gold, with eyes of obsidian and quartz, and eyebrows and eyelids decorated with lapis lazuli. Its headdress featured a cobra and a vulture, symbolizing the young king’s control over Upper and Lower Egypt.

But Carter’s discovery was not the end of the pharaoh Tutankhamun’s journey. Nor was it the beginning.

Who Was King Tutankhamun?

Howard Carter’s discovery of King Tut’s mask made him famous. It made King Tut famous, too — even more famous than he’d been in life. So who was the boy king with the golden mask?

Born in 1341 B.C., Tutankhamun had a short, somewhat unremarkable reign. After ascending to the throne at the age of nine following his father’s death, he seems to have largely followed the advice of an advisor named Ay.

Though young King Tut’s father had ordered Egyptians to shift to a monotheistic religion, and worship only the sun god Aten, Tutankhamun reversed his father’s mandate. Under his rule, Egyptians went back to worshipping multiple gods. 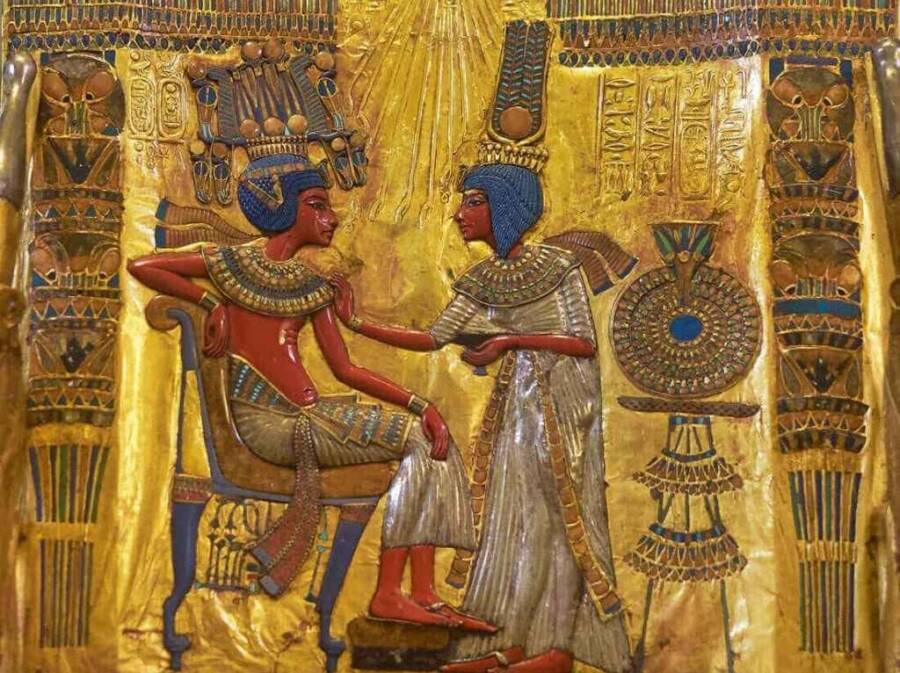 Otherwise, King Tut didn’t accomplish much during his reign. He married his half-sister, Ankhesenamun, but produced no heirs — both their daughters were stillborn. And in 1324 B.C., King Tut’s rule came to a sudden end when the young king died at the age of 19.

To date, no one is sure how Tutankhamun died. CT exams indicate that he suffered from malaria, a fractured lower leg, and, as a product of incest, had congenital deformities. He also walked with a clubbed foot. But whether King Tut died naturally, in an accident, or by assassination is unknown.

What is known is that the young pharaoh was honored in death. After being mummified and placed in a golden coffin, King Tut’s mask was placed upon his face. Then, he was locked in a tomb with thousands of treasures, his walking sticks, and the remains of his two daughters.

He remained there for 3,000 years, unseen, until the November day when Carter and Carnarvon stepped inside.

Since Howard Carter opened Tutankhamun’s tomb, the young king has traveled the world more than he ever did in life. King Tut — and King Tut’s mask — have been exhibited in France, the United Kingdom, Japan, Russia, and the United States.

But King Tut’s world travels have not been without scandal.

First of all, the remains of the young king have long been dogged by accusations that they’re cursed. Carter escaped scotch-free, but Carnarvon died soon after King Tut’s tomb was opened. He succumbed to blood poisoning after being stung by a mosquito.

Other associates of Carnarvon’s who entered the tomb also met strange fates. One 35-year-old died of respiratory failure. Another died in a fire. And one man even hung himself because he was afraid the curse would reach him next. 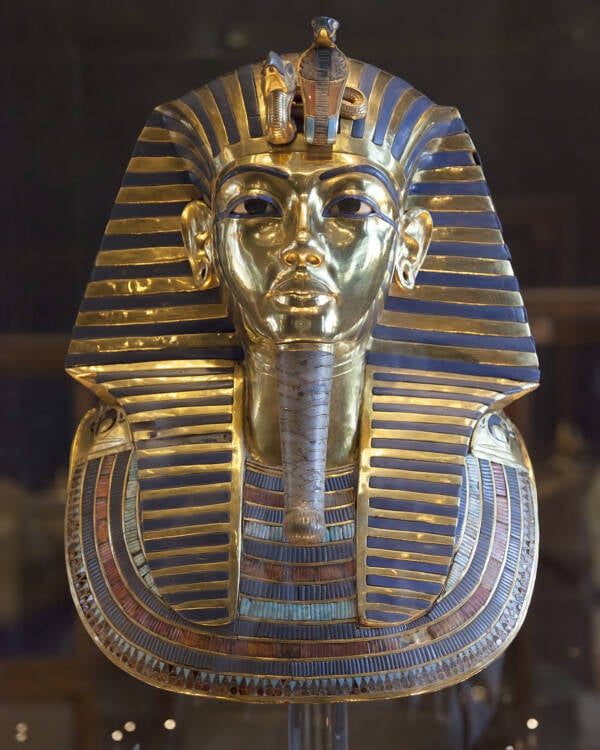 Curse aside, some have wondered if the mask even belongs to King Tut at all. Certain British Egyptologists have suggested that the mask was originally made for Nefertiti, Tutankhamun’s father’s wife. They came to this conclusion, in part, because King Tut’s mask seems to be wearing earrings.

However, Egyptologists have largely refuted this theory. Earrings were not limited to women or children in King Tut’s day. And there’s evidence that King Tut’s mask was made uniquely for him.

“The golden mask bears a hieroglyphic text engraved on its back, which is a magical writing like a spell, the purpose of which is to help the deceased in the pass over to the other world,” explained Bassam al-Shamaa, a tour guide and Egyptology writer.

“The writings mentioned several names usually used to refer to King Tut like, ‘Ra and Nebra’ among other names, which completely refutes [this] theory.”

Today, the life and death of Tutankhamun continue to fascinate. Three thousand years after his death and almost one hundred years after the opening of his coffin, museum visitors remain eager to see artifacts from his tomb.

But of all of the thousands and thousands of treasures unearthed from his final resting place, King Tut’s mask remains the most captivating. Beautiful and striking, its dark eyes stare unseeingly into our modern world, like a wayward visitor from another time.

After reading about King Tut’s mask, discover these fascinating facts about ancient Egypt. Or, see how Egypt’s famous pyramids were built.