Archaeologists In Egypt Finally Discover How The Pyramids Were Built

After centuries of mystery, archaeologists have made startling new discoveries about how the pyramids were built at the Egyptian city of Giza. 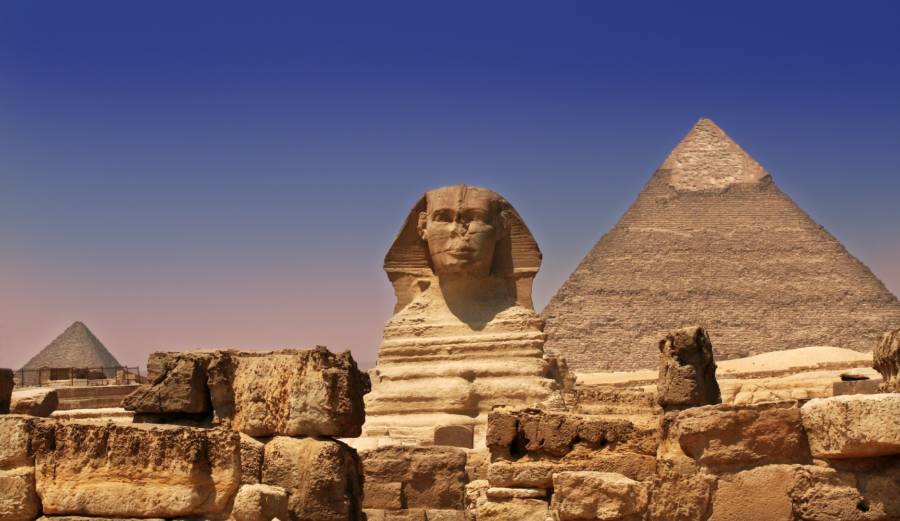 Built 4,500 years ago during Egypt’s Old Kingdom, the pyramids of Giza are more than elaborate tombs — they’re also one of historians’ best sources of insight into how the ancient Egyptians lived, since their walls are covered with illustrations of agricultural practices, city life, and religious ceremonies. But on one subject, they remain curiously silent. They offer no insight into how the pyramids were built.

It’s a mystery that has plagued historians for thousands of years, leading the wildest speculators into the murky territory of alien intervention and perplexing the rest. But the work of several archaeologists in the last few years has dramatically changed the landscape of Egyptian studies. After millennia of debate, the mystery might finally be over.

The Enigma Of How The Pyramids Were Built 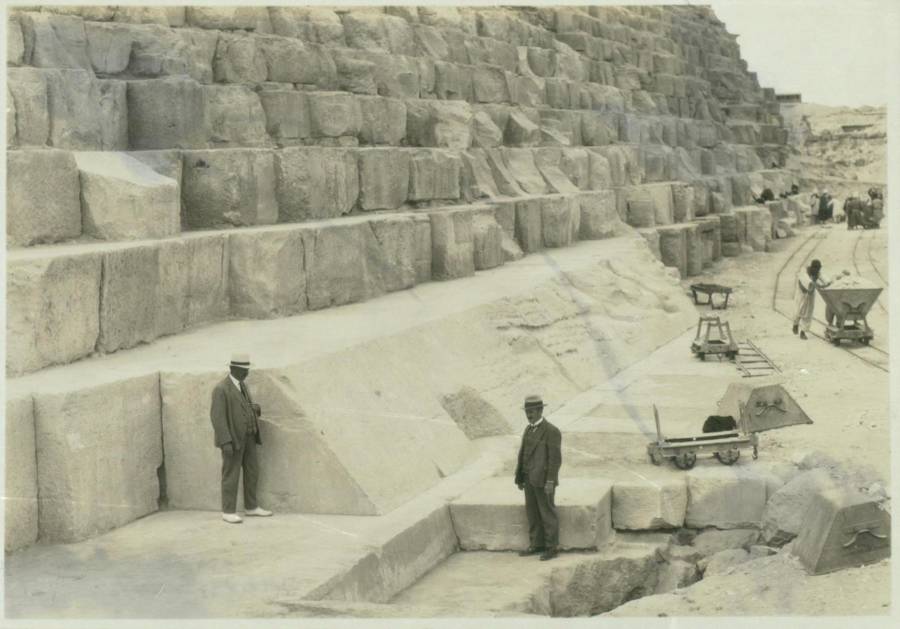 Harry Pollard/FlickrThe mystery of how the pyramids were built has puzzled historians for centuries. Here, a 1925 team examines the stonework.

Why have the pyramids perplexed generations of archaeologists? For one, they’re an astonishing engineering feat made particularly impressive by what we know their architects didn’t have.

For example, the Egyptians hadn’t yet discovered the wheel, so it would have been difficult to transport massive stones — some weighing as much as 90 tons — from place to place. They hadn’t invented the pulley, a device that would have made it much easier to lift large stones into place. They didn’t have iron tools to chisel and shape their stonework.

And yet Khufu, the largest of the Giza pyramids, was started in 2,550 BCE and is 481 feet of massive, breathtaking stonework. It and its neighboring tombs have survived 4,500 years of wars and desert storms — and they’re made from plans and measurements accurate to within a fraction of an inch. 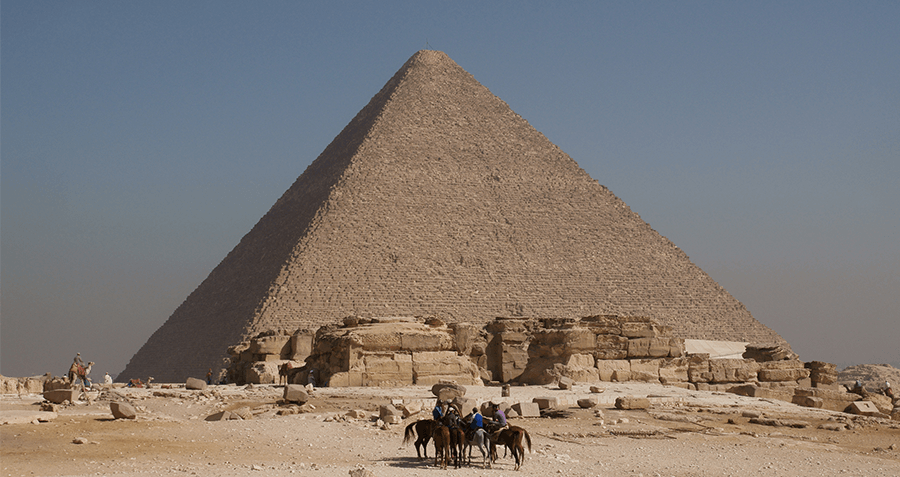 Dr. Craig Smith, author of the groundbreaking 2018 book How the Great Pyramid Was Built, puts it best:

“With their ‘rudimentary tools,’ the pyramid builders of ancient Egypt were about as accurate as we are today with 20th-century technology.”

What’s more, many historians are convinced that the building materials for the pyramids came from nearly 500 miles away.

The Heated Debate Over How The Pyramids Were Built 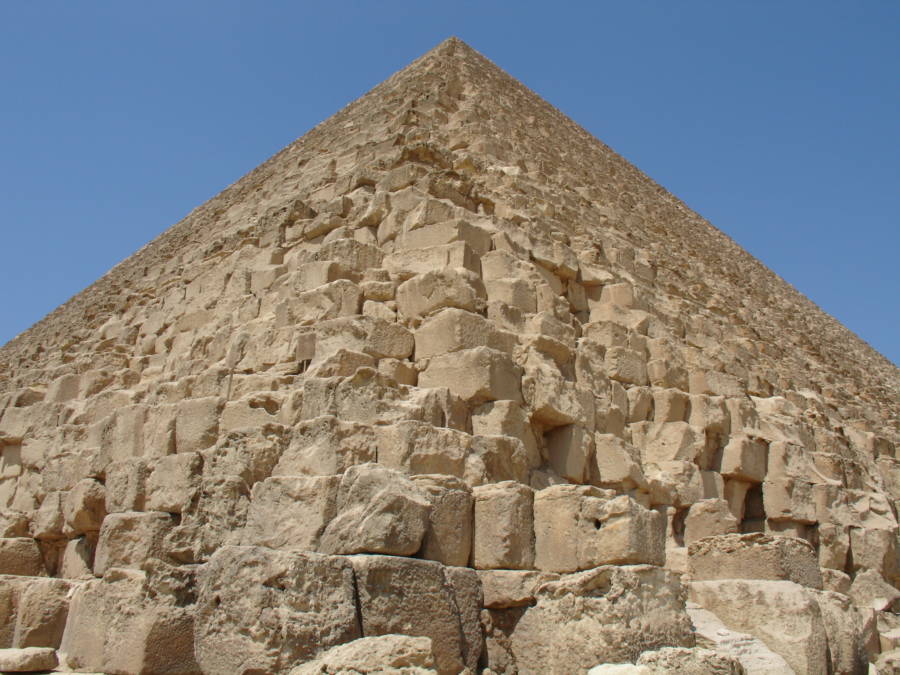 Wikimedia CommonsA close-up of the edge of the Great Pyramid at Giza.

To solve the problem of how such large stones traveled so far, some researchers have hypothesized that the Egyptians rolled their stones across the desert.

Though they didn’t have the wheel as we think of it today, they might have made use of cylindrical tree trunks laid side to side along the ground. If they lifted their blocks onto those tree trunks, they could effectively roll them across the desert.

This theory goes a long way toward explaining how the pyramids’ smaller limestone blocks might have made their way to Giza — but it’s hard to believe it would work for some of the truly massive stones featured in the tombs. 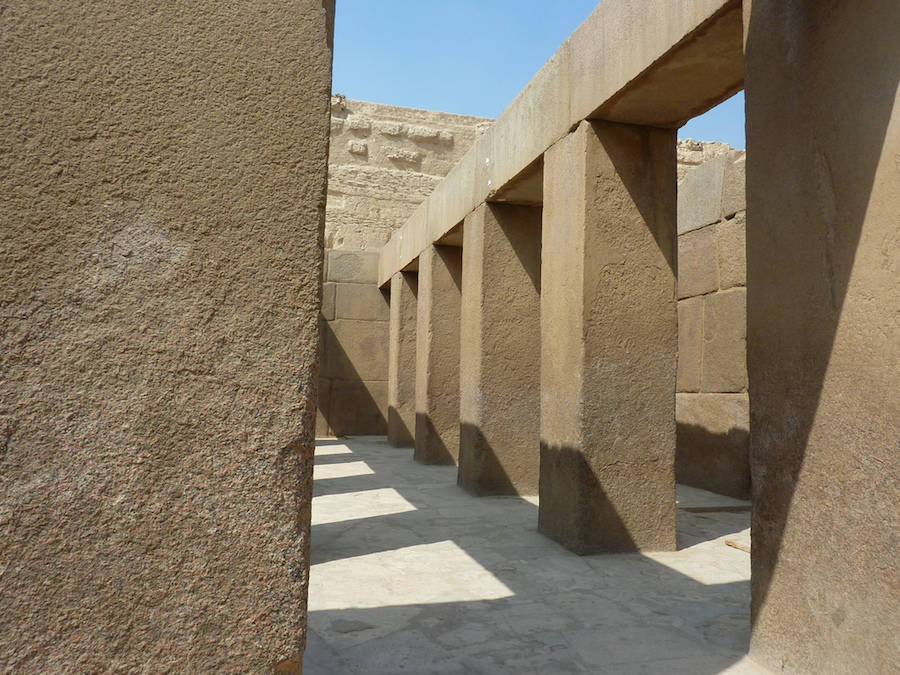 Proponents of this theory also have to contend with the fact that there isn’t any evidence that the Egyptians actually did this, clever though it would have been: there are no depictions of stones — or anything else — being rolled this way in Egyptian art or writings.

Then there’s the challenge of how to lift the stones into position on an increasingly tall pyramid.

Ancient Greek historians born after the pyramids’ construction believed the Egyptians built ramps like scaffolding along the faces of the tombs and carried stones up that way, while some modern theorists have pointed to strange air pockets that suggest that the ramps were actually inside the walls of the pyramids — which is why no sign of them remains on the exterior faces.

No conclusive evidence has been found in favor of either of these ideas, but both remain intriguing possibilities. 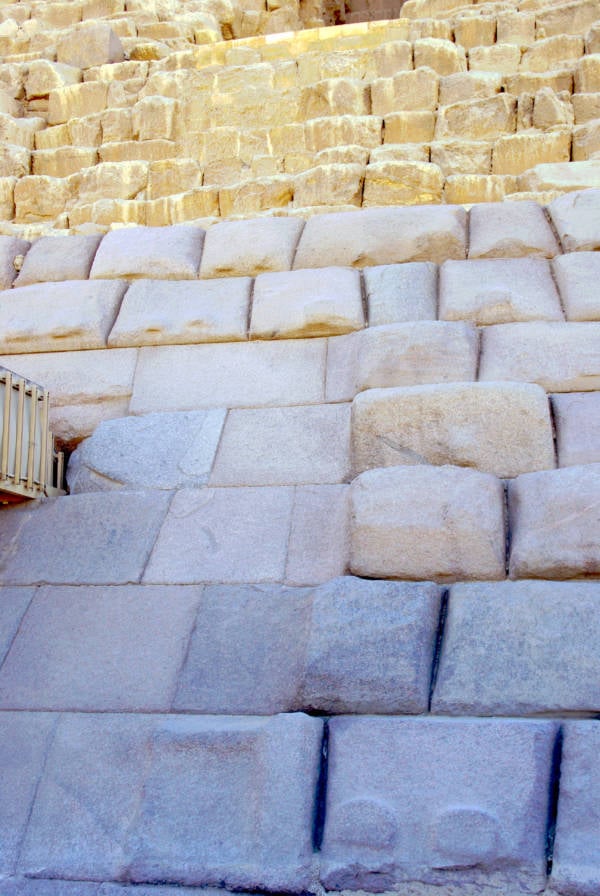 Wikimedia CommonsMassive unfinished stones at the base of Menkaure.

Amid such mystery, two startling new revelations about how the pyramids were built have recently come to light. The first was the work of a Dutch team who took a second look at Egyptian art depicting laborers hauling massive stones on sledges through the desert.

They realized that the tiny figure pouring water in the stone’s path wasn’t simply offering the desert some kind of ceremonial libation — he was wetting the sand because of the principles of fluid mechanics: water helps the grains of sand stick together and significantly reduces friction.

The team built their own replica sledges and tested their theory. The result? The Egyptians might have been able to move stones larger than archeologists and historians ever believed possible.

But that’s not all. Egypt expert Mark Lehner has put forward another theory that makes how the pyramids were built a little less mysterious.

Though today the pyramids sit in the middle of miles of dusty desert, they were once surrounded by the floodplains of the Nile River. Lehner hypothesizes that if you could look far beneath the city of Cairo, you would find ancient Egyptian waterways that channeled the Nile’s water to the site of the pyramids’ construction. 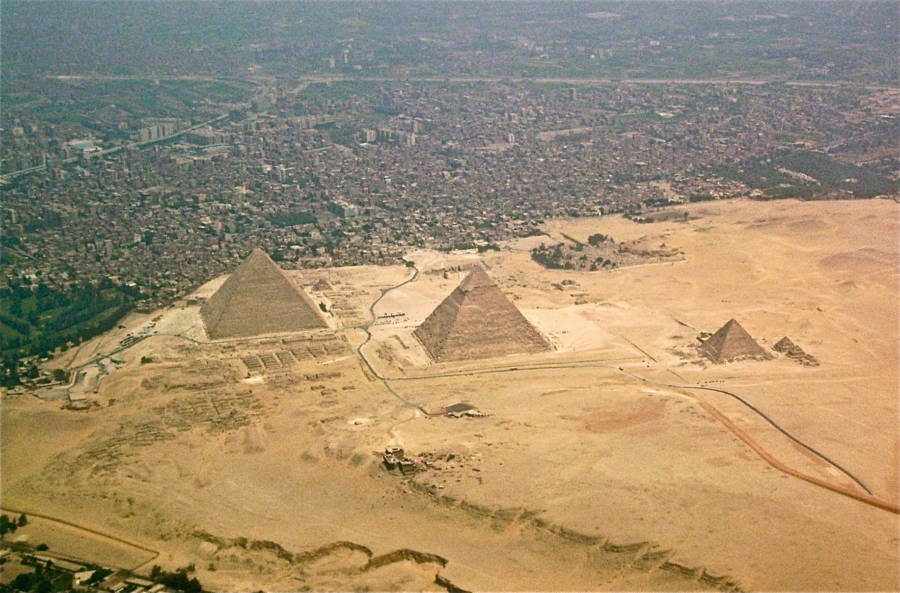 An aerial view of the pyramids at Giza.

The Egyptians would have loaded massive stones onto boats and transported them on the river right to where they needed them. Best of all, Lehner has proof: his excavations have revealed an ancient port right by the pyramids where the stones would have landed.

The icing on the cake is the work of Pierre Tallet, an archaeologist who in 2013 unearthed the papyrus journal of a man named Merer who appears to have been a low-level bureaucrat charged with transporting some of the materials to Giza.

After four years of laborious translation, Tallet discovered the ancient diarist — responsible for the oldest papyrus scroll ever found — described his experiences overseeing a team of 40 workmen who opened dikes to divert water from the Nile into man-made canals that led straight to the pyramids.

He recorded his journey with several gigantic limestone blocks from Tura to Giza — and with his writings offered the most direct insight there’s ever been into how the pyramids were built, putting a piece of one of the world’s oldest puzzles into place. 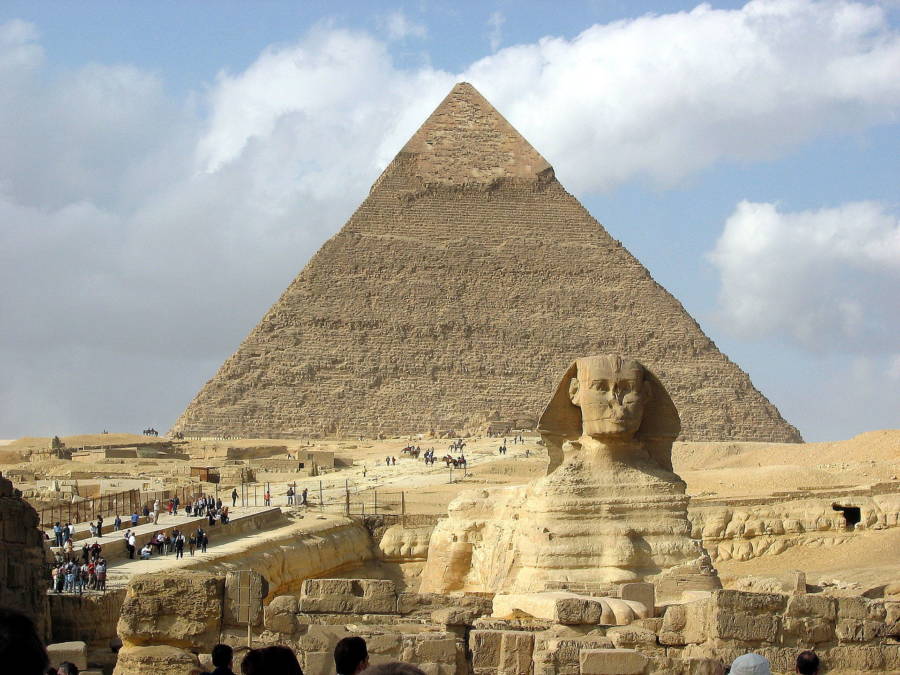 Mark Lehner’s excavations have also settled another debate about how the pyramids were built: the question of slave labor. For years, popular culture has imagined the monuments as the bloody sites of backbreaking forced labor where thousands perished in involuntary servitude.

Though the work was dangerous, it’s now thought that the men who built the tombs were most likely skilled laborers who volunteered their time in exchange for excellent rations. The 1999 excavation of what researchers sometimes call the “pyramid city” shed light on the lives of the builders who made their homes in nearby compounds. 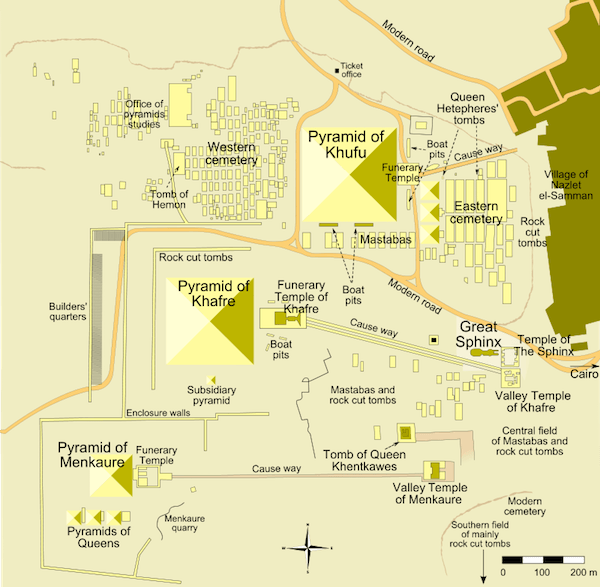 They found comfortable-looking barracks that appeared to house a rotating crew of laborers, fitted with the conveniences of well-off Egyptians.

They also uncovered a substantial graveyard of workers who died on the job — yet another reason researchers now think the men responsible for the pyramids’ construction were likely to be skilled laborers. The work was dangerous enough without throwing the untrained into the mix.

Though they were handsomely rewarded and most likely working voluntarily — in short, not slaves — how they felt about the risks they took remains a mystery. Were they proud to serve the pharaohs and build their vehicles to the afterlife? Or was their labor a social obligation, a kind of draft that mixed danger and duty?

We can only hope further excavations will continue to offer exciting new answers.