Giant oarfish can grow to lengths of over 50 feet, but these sea-serpent-like creatures have only been seen alive a handful of times.

You’d be forgiven for thinking oarfish are made up — the fever dream of an ambitious filmmaker or science-fiction author.

With humongous eyes allowing them to navigate the deepest parts of the ocean and bodies that grow longer than a school bus, disbelief is a rather natural response. 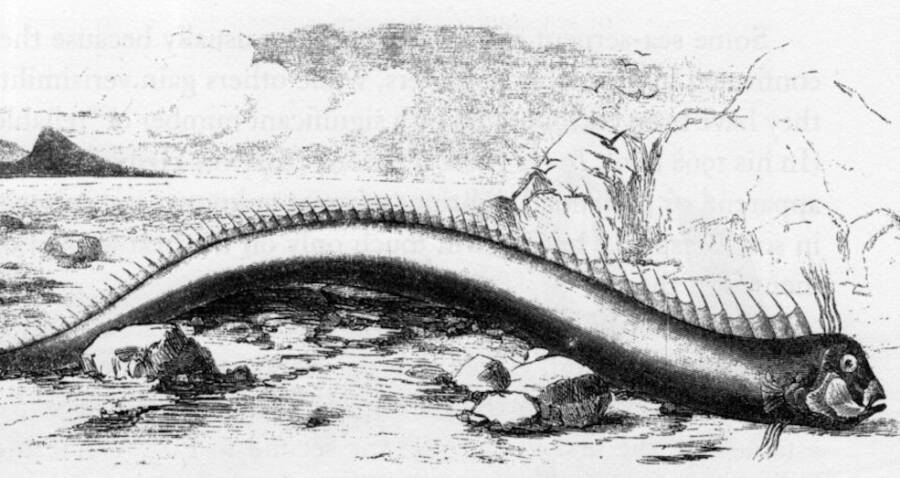 Wikimedia CommonsIllustration of a 16-foot oarfish that washed ashore Bermuda Beach in 1860, as published in Harper’s Weekly.

Oarfish are the likely source of sea serpent myths that sprung up over centuries across most maritime cultures around the world. Those fortunate enough to have seen them at the sea surface have noted their heads sticking out of the water as their remarkably long bodies slither along below.

Oarfish are pelagic lampriform fish belonging to the Regalecidae family. Their rare appearance on the ocean surface has made them so mysterious that Japan even includes the creature in its folklore.

Known regionally as the “Messenger from the Sea God’s Palace,” it’s commonly believed the animal is a harbinger of earthquakes and tsunamis. The legend garnered new traction when more than a dozen oarfish washed ashore on Japan’s beaches — the year before the 2011 Fukushima disaster.

Recently, these reclusive deep-sea swimmers are in the spotlight again thanks to the popularity of Nintendo’s Animal Crossing: New Horizons game which offers players the chance to catch one of these impressive creatures.

Footage of an oarfish in its natural habitat.

These flat, eel-like fish are also called ribbon fish due to their long, skinny bodies or rooster fish because of their frilly, red dorsal crests.

Unless you’re small enough to be nabbed by an oarfish’s small toothless mouth, the animal is harmless. Even its feeding process is rather casual, as it simply swims around the ocean with an open mouth and takes what it can get.

Ironically, the same animal that inspired horrifying tales of deadly sea monster encounters feeds entirely on tiny plankton. In lieu of teeth, a small opening to the digestive system allows the fish to nourish itself.

Unlike most other bony fish, oarfish don’t have scales. Instead, they have tubercules and their skins are coated with a silvery substance called guanine. People who have tried to eat oarfish reported that their flesh is quite slimy and unappetizing.

The animal’s family name Regalecidae stems from the Latin regalis, meaning “royal.” The dorsal fin begins above the animal’s extremely large eyes and runs the entire length of the fish. Of their estimated 400 dorsal fin rays, the first 10 to 13 are elongated, forming a pronounced crown-like crest.

None of their fins contain spines. These animals move by undulating their bodies in a wavy formation. The oarfish is also known to move vertically through the water, able to shoot straight up to the surface when it wants to. 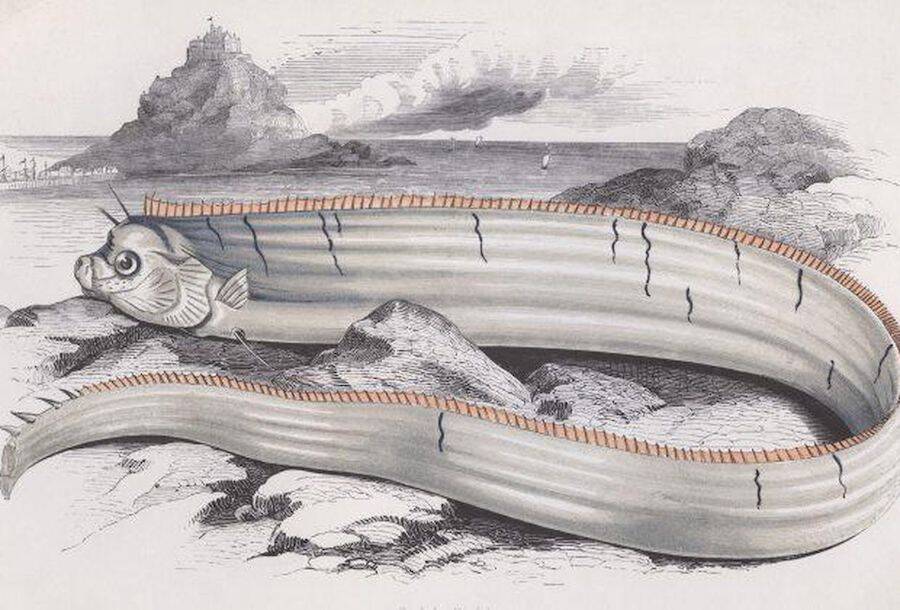 Wikimedia CommonsThe first footage ever captured of an oarfish at depth was taken in 2011.

Since these animals rarely come up to the surface, not much is known about their conservation status. Since we fear what we don’t know, the related giant and slender oarfish have both become the subject of folklore and stunned those who’ve caught them in the flesh.

Sighting a slender oarfish (Regalecus russelii) washed ashore in Japan is thought to be a bad sign. The faithful believe that a beached “Messenger from the Sea God’s Palace” signals an impending earthquake. Though seemingly baseless, there could be some scientific grounds for the belief.

“Deep-sea fish living near the sea bottom are more sensitive to the movements of active faults than those near the surface of the sea,” explained earthquake expert Kiyoshi Wadatsumi of non-profit organization e-PISCO.

Unlike slender oarfish, giant oarfish (Regalecus glesne) have rarely been caught. The silvery animal is often called the “king of herrings” due to its superficial similarity with the smaller fish. As the name implies, however, these creatures are huge — and can grow up to 56 feet long and weigh 600 pounds.

First described in 1772, the rarely sighted animal lives at depths around 3,280 feet. Naturally, this made a 1996 encounter by United States Navy SEALS all the more memorable. While stationed on the coast of Coronado, California, the team discovered a 23-foot giant oarfish washed ashore.

Only in 2001 was an oarfish filmed alive in its habitat for the first time. During a routine inspection of a buoy in the Bahamas, U.S. Navy personnel spotted the animal rhythmically undulating along the waters.

Oarfish spotted swimming hear the ocean’s surface often stick their heads out of the water.

Seven years after that, the first confirmed sighting of an oarfish at depth was reported. Scientists capturing footage of rare fish in the Gulf of Mexico estimated it was up to 33 feet long. Within the next three years, the deepest verified record of a giant oarfish was made — between 1,519 and 1,614 feet.

Curiously, at least one account by experts in New Zealand claimed that an oarfish they encountered gave off “electric shocks” when touched. In the end, so little is known about these slithering deep-sea creatures, that their distribution information consists entirely from records of them beached or caught.

Fortunately, it seems that the advancement of technology has provided researchers with more data than ever before — with encounters and captured footage showing that these once-feared “serpeants” are among the most elegant and harmless creatures of the deep.

After reading about the fascinating oarfish species which includes the longest bony fish alive, watch a giant python that ate a man alive being captured on camera by locals. Then, read about the 15 weirdest freshwater fish ever caught.