Meet The Alligator Gar, The 100-Million-Year-Old ‘Megafish’ That Humans Almost Wiped Out

The alligator gar fish, aka Atractosteus spatula, is often found in Texas and weighs up to 350 pounds while measuring up to 10 feet long. 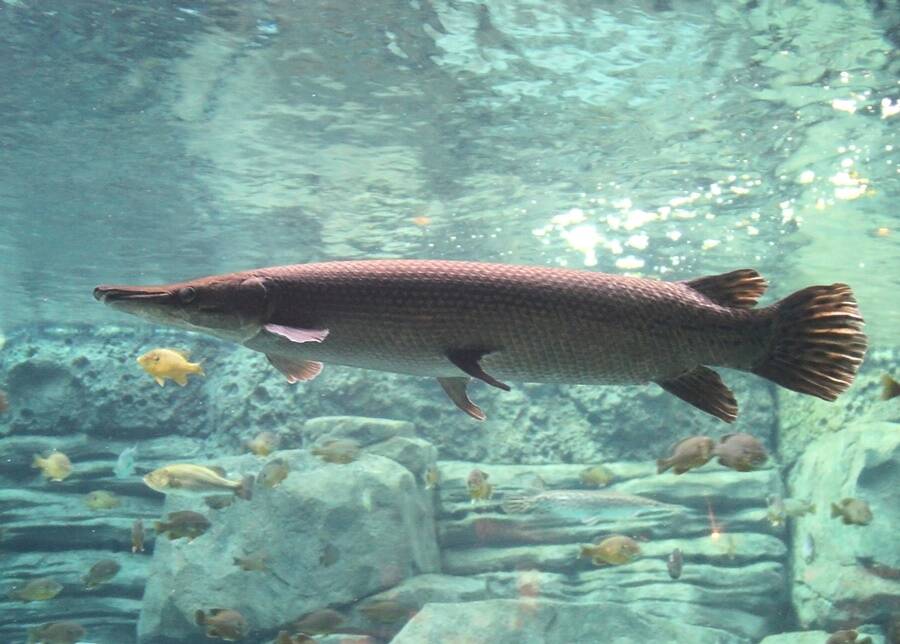 Wikimedia CommonsThe alligator gar is one of the largest freshwater fish species in North America.

Despite being one of the world’s oldest living species, the alligator gar spent much of the 20th century being thought of as a “trash fish” that needed to be eradicated from the underwater ecosystem.

Many believed that this fish was a pest that gobbled up quality game and damaged nets. However, the alligator gar was the real prize, capable of reaching over 350 pounds and measuring up to 10 feet long, making it the largest freshwater fish species in North America that spends almost all its time in fresh water. (The white sturgeon is often considered North America’s largest freshwater fish, but it spends a good amount of time in salt water.)

The alligator gar has undergone a surprising reputation makeover in recent years. Not only has it appeared in the popular Animal Crossing: New Horizons video game, it has also become a prized wrangler’s catch in real life. 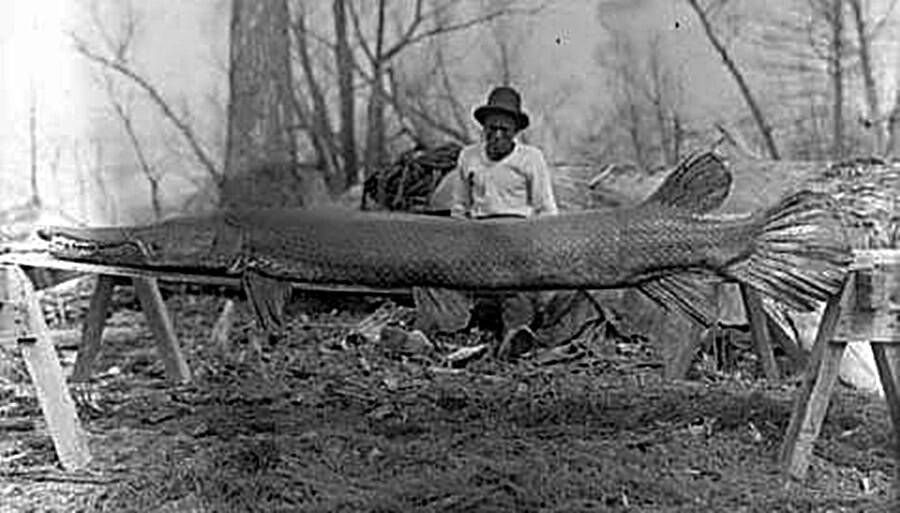 Despite its name, the alligator gar (or Atractosteus spatula) bears no relation to alligators. The nickname only refers to the shared resemblance between the two animals, which is easy to see when you compare the fish’s wide head and razor-sharp teeth to that of an alligator’s.

Like its crocodilian namesake, the alligator gar’s fearsome appearance is an obvious hint to its ancient ancestry. Alligator gar are among the few fish species that swam during the time of dinosaurs and remain alive today. Thanks to the discovery of fossil records, this megafish’s existence on Earth can be traced back to the Early Cretaceous Period over 100 million years ago.

Given its ancient lineage, it’s no surprise that the alligator gar is one of the largest freshwater fishes, though it can tolerate salt water as well. One of several species of gar found in North America, Central America, and Cuba, alligator gar is the largest known gar species that exists in the world. 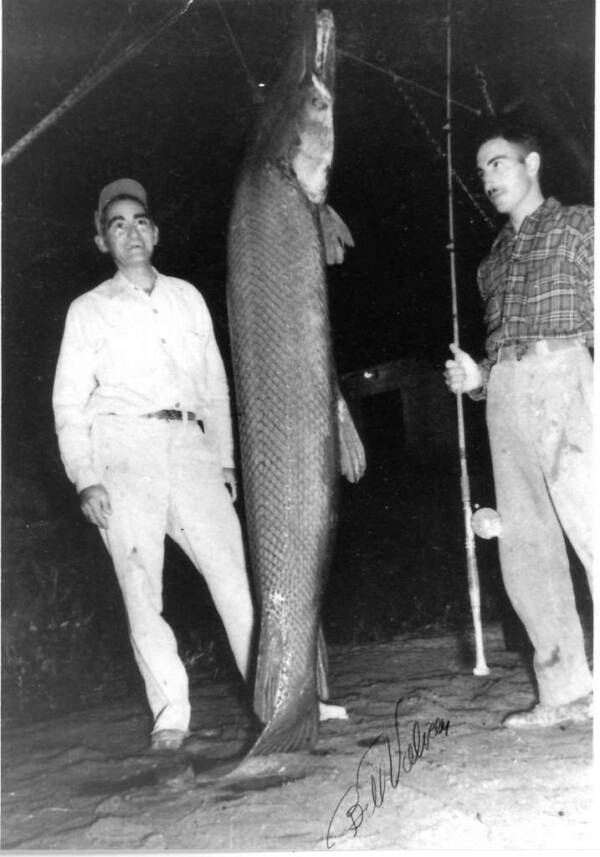 The largest alligator gar fish ever caught on rod-and-reel was one captured in 1951 in the Rio Grande River. The monstrous catch weighed 279 pounds.

World War II veteran and local council member Guillermo “Bill” Valverde of Mission, Texas, managed to wrangle the giant fish out of the water and seal his name in the fishing records.

However, based on historical observations, this fish can actually be much larger than that one. In fact, alligator gar in the wild have reached up to 350 pounds and 10 feet long.

A Common Catch In Texas 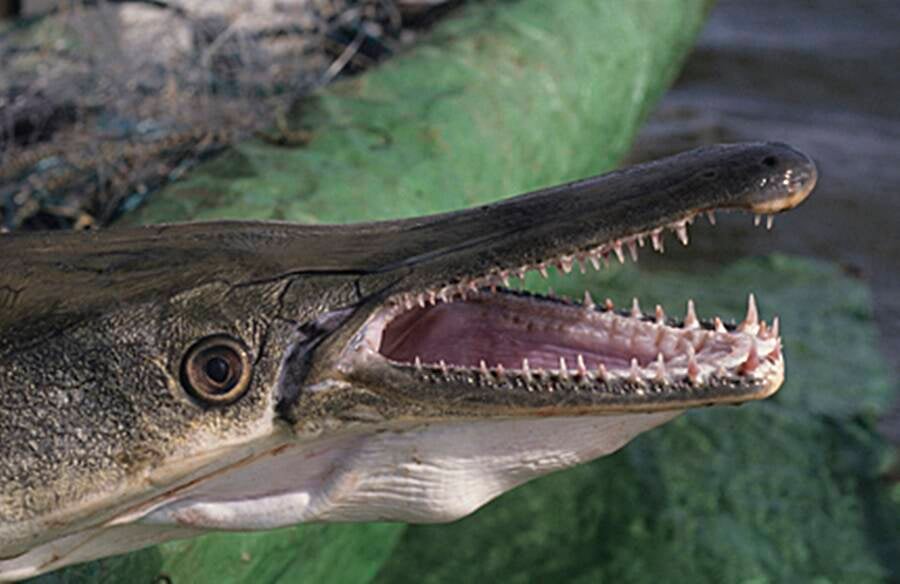 Although the alligator gar can be found throughout North and Central America, this species is most common in the lower Mississippi River Valley, from Oklahoma to the west, Arkansas to the north, Texas and portions of Mexico to the south, and east to Florida.

The gator gar — as it’s sometimes called — is an especially regular fixture in the reservoirs and rivers that cut through Texas. In fact, a report revealed that the alligator gar is one of the most abundant predators that swim in the Texas bays, possibly even exceeding the commonly found bull shark.

There are at least four different types of gar in Texas alone: the spotted gar, the longnose gar, the shortnose gar, and, of course, the alligator gar fish.

The different species of gar each have unique traits, but they also share some similarities, such as the trademark elongated snout the alligator gar is known for. According to the state’s Parks and Wildlife Department, the alligator gar is one of the most misidentified fish species around, with residents often mistaking other gar for an alligator gar.

The alligator gar is much wider than other gar and has a distinct short, wide snout. It’s often olive brown in color and comes armored with glistening scales. The alligator gar has gills like other fish, but it also has a swim bladder connected to its gut by a unique duct, which allows it to gulp air from the surface, and live in water that is low in oxygen. 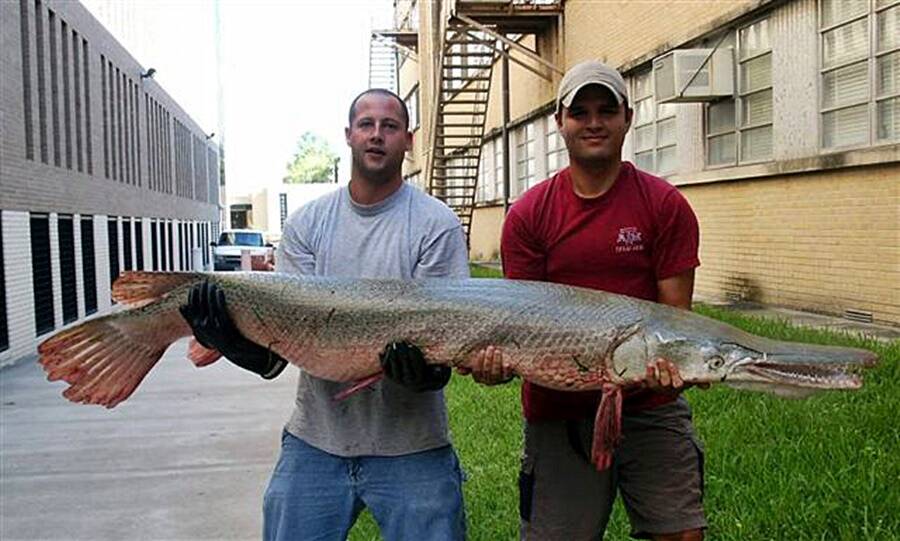 Wikimedia CommonsOnce considered a “trash fish,” the species is now a prized catch for sport fishers.

Despite their monstrous size, alligator gar aren’t the vicious predators you might think they are. They pose no threat to humans (unless you eat their poisonous eggs), and they have never been known to behave aggressively unless you fall under their list of prey.

They primarily prey on fish, small turtles, birds, blue crabs, and small mammals. They have few natural predators. But ironically enough, alligators have actually been known to attack and eat alligator gar.

Breeding season for the alligator gar is typically between April and May, but these ancient fish are slow to reproduce, sometimes having no offspring for years. When they do spawn, the eggs hatch within a couple of days and feed on larval fish and insects.

While the gator gar isn’t likely to attack humans, its eggs are toxic if digested, giving them a natural defense against predators.

From “Trash Fish” To Prized Reel

The alligator gar got a reputation makeover over the last few years as a way to encourage support for its conservation.

Even though this megafish is still easily found in places like Texas, it was much more abundant in the United States only decades ago. This is because the fish, a popular catch among locals today, was once considered a “trash fish” species and nearly culled because of it.

Indeed, the alligator gar’s less-than-appealing look spawned myths painting it as a pest that wreaked havoc on nets and ate valued sport fish species. Because of its terrible reputation, efforts to eradicate the “trash fish” were abundant during the 1950s.

“It’s a unique fish, a misunderstood fish, and it’s had an unfounded bad rap,” said Dave Terre, chief of fisheries management and research at the Texas Parks and Wildlife Department.

Fortunately, modern studies of the alligator gar have brought awareness to its history and the vital role it plays in keeping the local ecosystem healthy.

The alligator gar has undergone a makeover in recent years, transforming it from an unwanted “bottom feeder” into a prized catch. It’s also become a popular delicacy among some Americans. In the South, fried gar balls and filets are commonly served, and there are even some businesses that sell novelty jewelry from the alligator gar’s scales. 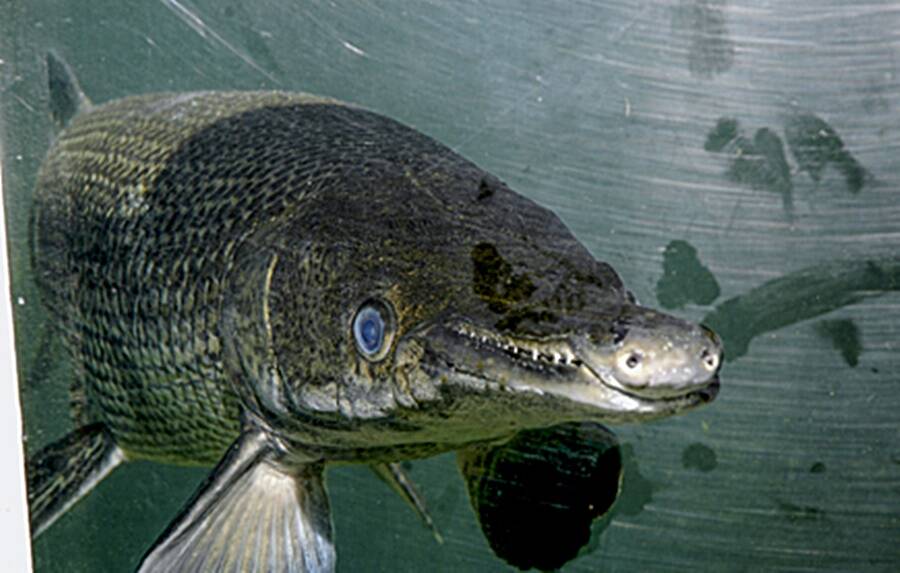 Larry Hodge/Texas Parks and Wildlife DepartmentThe gator gar has come a long way in more than half a century.

Despite the gar’s improved reputation, its populations could be in trouble if fishing regulations aren’t maintained. (Texas is known to have especially tight restrictions.) Experts also have their concerns about the fish’s infamously slow reproduction rate.

Alligator gar don’t begin to spawn until the age of 10, and they only breed when environmental conditions are just right for them to lay eggs. If their numbers ever became dangerously low, it would be difficult for the species to quickly bounce back.

“We have much less flexibility with alligator gar because of the fragile nature of these populations,” Terre said. “Our harvest regulations will always need to be on the restrictive side.”

Now that you’ve learned about the fearsome-looking alligator gar fish, meet the coelacanth, the 400-million-year-old prehistoric fish we thought went extinct. Next, get a glimpse of the ancient Chinese paddlefish, the first species of the new decade declared extinct.