"Loss of such unique and charismatic megafauna representative of freshwater ecosystems is a reprehensible and an irreparable loss," one scientist said. 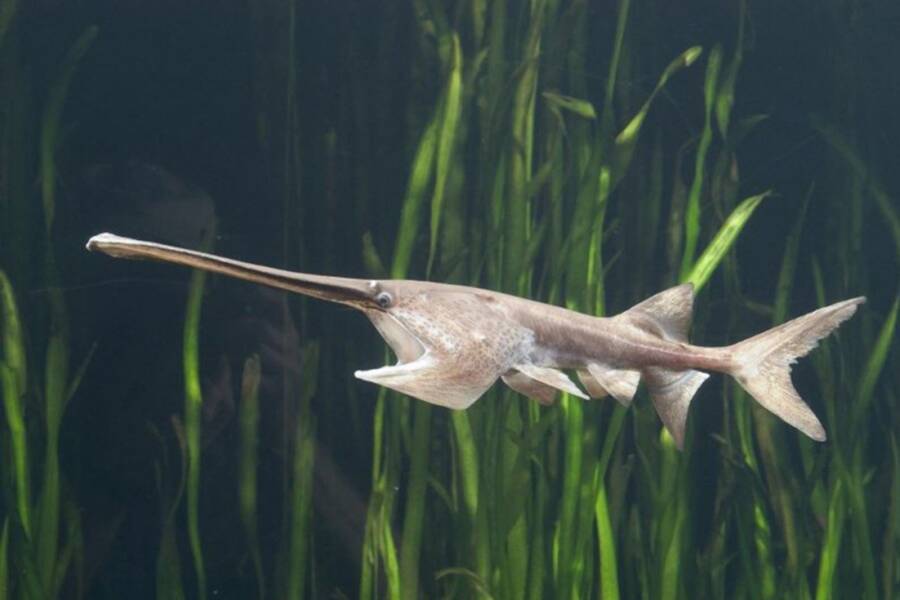 As Earth’s environmental woes grow, another species has been officially declared extinct. The Psephurus gladius, known as the Chinese paddlefish, has lived in the Yangtze River since the age of the dinosaurs.

But according to a report by the South China Morning Post, the prehistoric fish species no longer exists. The announcement was made last week in a research paper published in the journal Science of the Total Environment by Chinese scientists.

The Chinese paddlefish was one of the world’s largest freshwater fish, as it could grow up to 23 feet long and weigh up to 1,000 pounds.

According to the research paper, the species was “one of only two extant members of a relict lineage that was most diverse and widespread 34-75 million years ago.” But fossil evidence suggests the Chinese paddlefish existed even longer in the Lower Jurassic period, roughly 200 million years ago.

Furthermore, the Chinese paddlefish was one of only two living species of paddlefish. The other is the American paddlefish or Polyodon spathula, which still roams parts of the Mississippi River. However, like its now-extinct cousin, its population has severely declined.

Although the species was initially found in other large-flowing rivers, its population suffered so much that by the 1950s they were only found in the waters of the Yangtze River. By 1996, the Chinese paddlefish was listed on the critically endangered species list.

The Chinese government began ramping up conservation efforts to protect the ancient fish, but by the early 2000s, researchers were unable to find enough fish in the wild to study. However, in 2003, a team from China’s fishery sciences academy was able to capture a Chinese paddlefish and attach an ultrasonic tracker to it.

The researchers released the Chinese paddlefish back into the Nanxi River, an offshoot of the Yangtze River in Sichuan province. But the hard rocks in the river caused the team to lose the tracker’s signal — and this would be the last known sighting of the species in the wild. Now, the fish has been officially declared extinct. 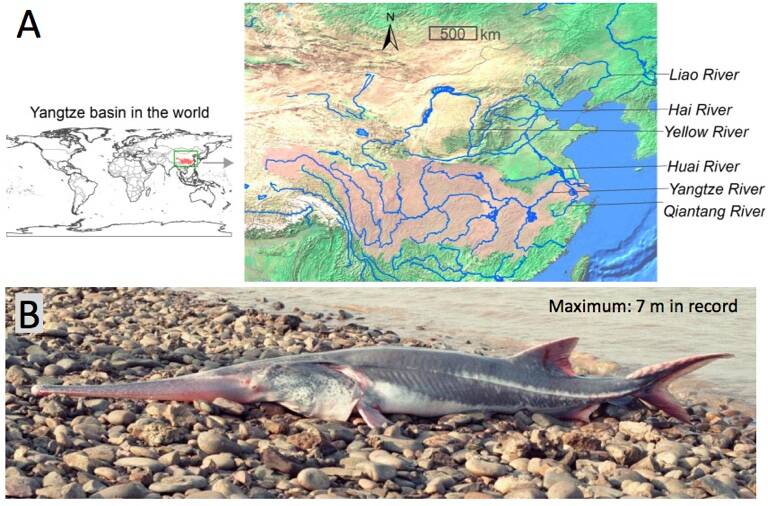 Zhang, et alA map of the historic distribution of the Chinese paddlefish (top) and a specimen found in 1993.

The conclusion was drawn after a two-year survey covering the entire Yangtze River basin. Chinese scientists partnered with researchers from the Czech Academy of Sciences and the United Kingdom’s University of Kent to conduct the survey that was meant to create an exhaustive database of the river’s fish species.

The team surveyed the main arm of the Yangtze River, its tributaries, and the Dongting and Poyang lakes. By the end of the survey, the researchers successfully identified 332 fish species living in the river — but not a single Chinese paddlefish was found.

The resulting paper declaring the Chinese paddlefish extinct was based on an evaluation made by an expert panel under the International Union for Conservation of Nature (IUCN) in Shanghai in September.

“We respect the evaluation model and experts from the IUCN, although we accept this result with a heavy heart,” Wei Qiwei, the study’s co-author from the Chinese Academy of Fishery Sciences in Wuhan, told Chutian Metropolis Daily.

Between 1984 to 1993, Wei himself managed to rescue four of the giant fish species when they became trapped, but only one survived. The surviving fish was released back into the river.

“Paddlefish are huge,” he said. “It’s very difficult to raise them [in captivity].”

The Deterioration Of The Yangtze River 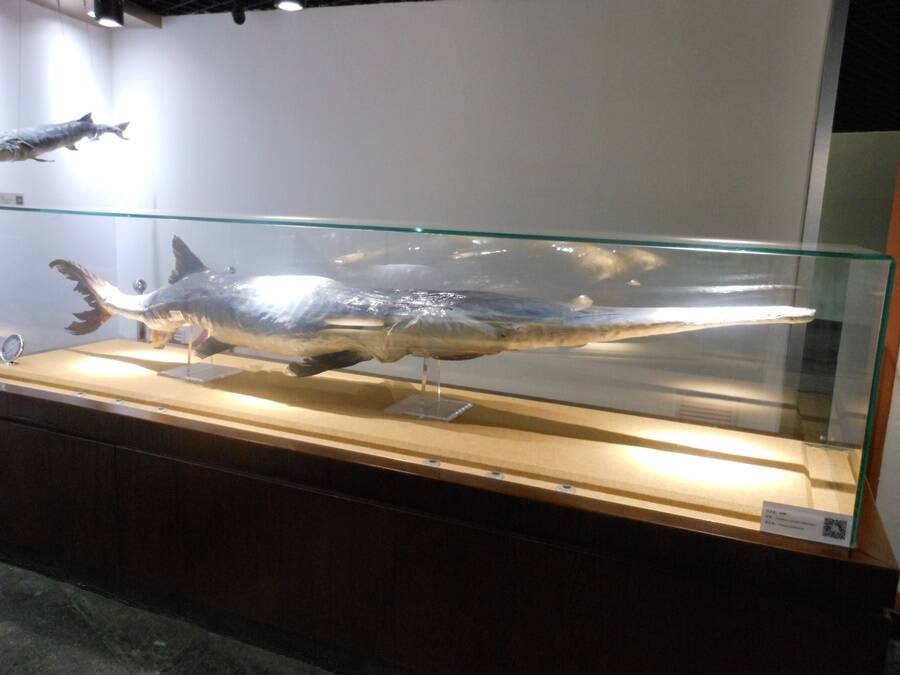 Wikimedia CommonsThe last sighting of the species was in 2003 and researchers were able to tag the specimen. Unfortunately, the signal was lost.

The Yangtze River, which stretches 3,915 miles and is inhabited by 4,000 species of aquatic wildlife, has seen a dramatic uptick in pollution in the past century. Alongside diversion and damming projects, this had significant impacts on the river’s ecosystem.

According to environmental non-profit news outlet Mongabay, the construction of the first dam on the Yangtze River, the Gezhouba Dam, was one of the first big blows to the Chinese paddlefish’s survival.

On top of that, overfishing, pollution, and water traffic made matters worse for the river’s struggling ecosystem. While it’s possible for a species declared extinct to still exist somewhere else, the research team says it’s unlikely in the case of the Chinese paddlefish.

“Loss of such unique and charismatic megafauna representative of freshwater ecosystems is a reprehensible and an irreparable loss,” Wei said. It is indeed an unimaginable loss for our planet’s animal population, but researchers are already turning their attention to the other species in the Yangtze River that are in need of protection. 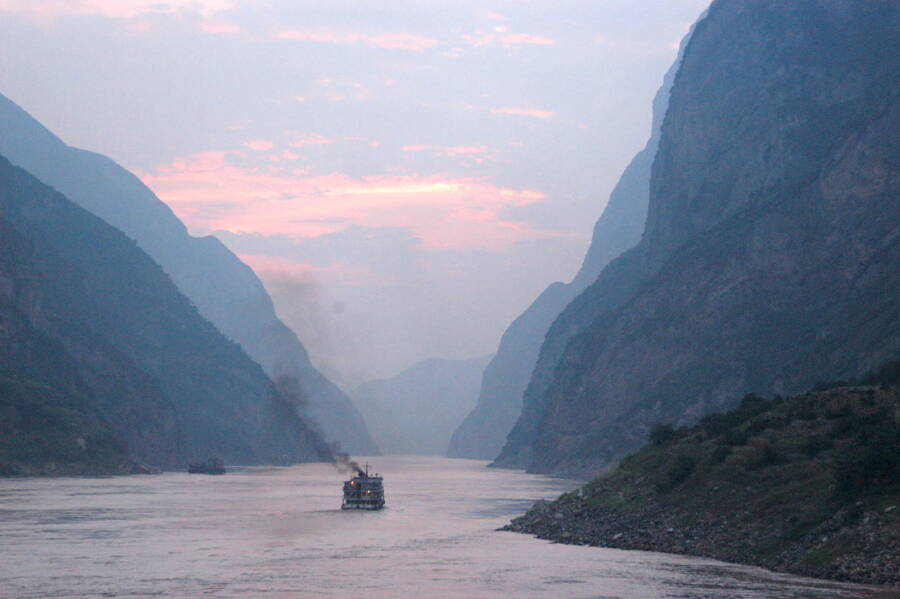 Wikimedia CommonsParts of the Yangtze River are now under the protection of a 10-year ban on commercial fishing.

Two other species in the river — the reeves shad and the baiji, also known as the Yangtze River dolphin — have already been declared functionally extinct, meaning there aren’t enough males and females of the species to reproduce effectively.

The Chinese government is also putting tougher conservation policies in place to prevent further loss of the river’s rare species.

A 10-year commercial fishing ban on the Yangtze River has been instated to take effect on Jan. 8, 2020, which covers 332 conservation sites along the waterway. The ban’s coverage area will be expanded to include the main river course and its tributaries next year.

China’s vice minister of agriculture and rural affairs Yu Zhenkang said the moratorium aimed to “curb the decline of the river’s ecosystem and any further drop in biodiversity.” Unfortunately, the animals living in the Yangtze River aren’t the only fauna species at risk of going extinct.

A UN report published in May 2019 estimated one million species of plants and animals are at risk of extinction.

Among the results of the report are the loss of 559 domesticated breeds of mammals used for food have, the loss of more than 40 percent of the world’s amphibian species, and more than one-third of marine mammals are threatened with extinction.

Next, learn about the rediscovery of an “extinct” venomous snake species in South Africa and take a look at extinct animals that should be cloned back to existence.