Florida Police Respond To Reports Of Woman Screaming For Help, Discover It Was A Parrot Instead

When deputies heard there was a woman screaming for help, they rushed to the scene — only to find a cheeky green bird named Rambo. 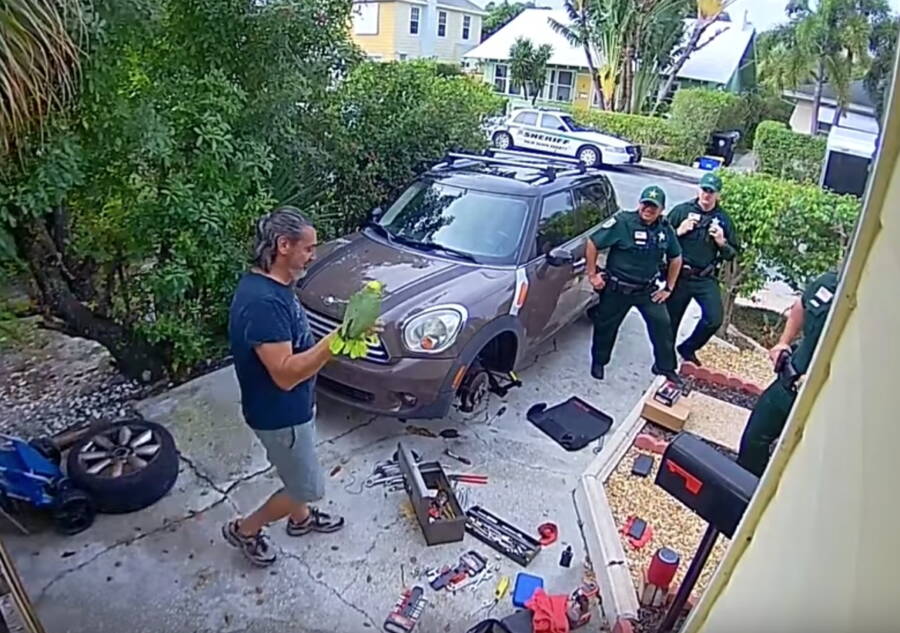 ViralHog/YouTubePalm Beach County Sheriffs respond to 911 calls about a screaming woman, only to find that Rambo the parrot was responsible.

On Dec. 29, 2019, the Palm Beach County Sheriff’s Office in Florida received a distressing 911 call. Reports of a woman screaming for help had deputies rush to the scene — only to find the cries were actually coming from a parrot named Rambo.

According to NBC News affiliate WPTV, the parrot owner in question had no idea the police were called until deputies arrived at the scene. He was changing the brakes on his car when deputies showed up and informed him of the unnerving reports that there was a woman shouting for help.

The Lake Worth Beach resident then introduced them to his parrot, Rambo. According to ABC 15, the bird had not only been screaming for help — but to be let out, as well.

“I was changing the brakes on my wife’s car and had my 40-year-old parrot, Rambo, on his outside perch where he sings and talks,” the unidentified man explained. “Sometime later four police officers showed up saying a neighbor called because she heard a woman screaming for help.”

The homeowner’s security camera captured the entire incident on video.

“I promptly introduced the officers to Rambo and we all had a good laugh,” the man added. “Afterward, I also introduced Rambo to the neighbor who called in the screaming.”

Law enforcement officials were surely relieved to find nothing but a comedy of errors on their hands rather than a serious situation. Rambo’s owner explained that she “had a good laugh” about the whole ordeal and that his pet has been screaming bloody murder for decades.

“Sometimes Rambo yells ‘help, help, let me out,'” he said. “[It’s] something I taught him when I was a kid and Rambo lived in a cage.”

Our Deputies in Lake Worth Beach came to the help of someone screaming for help. Hilarity ensued. "I was changing the…

As the Palm Beach County Sheriff’s Office posted on Facebook, “hilarity ensued” once deputies fully understood the actual situation. This is, after all, one of those lighthearted and positive law enforcement scenarios — where both parties have a chuckle and part ways with no further issues.

Fortunately for us, the homeowner’s security camera recorded the entire incident on video. The whole sequence of events, from a man working on his wife’s car and police showing up to introducing the suspicious cops to his parrot, was captured perfectly.

The last time that law enforcement and parrots made the news together was in April 2019, due to entirely different circumstances. According to The Guardian, that particular case saw a “super obedient” lookout parrot — who was trained by Brazilian drug dealers to spot police — get seized by the law.

For officers of the Palm Beach County Sheriff’s Office, meeting a parrot named Rambo was presumably far less adrenaline-fueled than that — and a memorable way to start the new year.

After learning about Palm Beach County deputies meeting Rambo the parrot, read about why Alex the parrot may have been the world’s smartest bird. Then, take a look at these Florida Man headlines from 2019 that are truly something/a>.