For 4,000 years, people in western Mongolia have used eagles to hunt small mammals — though only 10 women still uphold the practice. 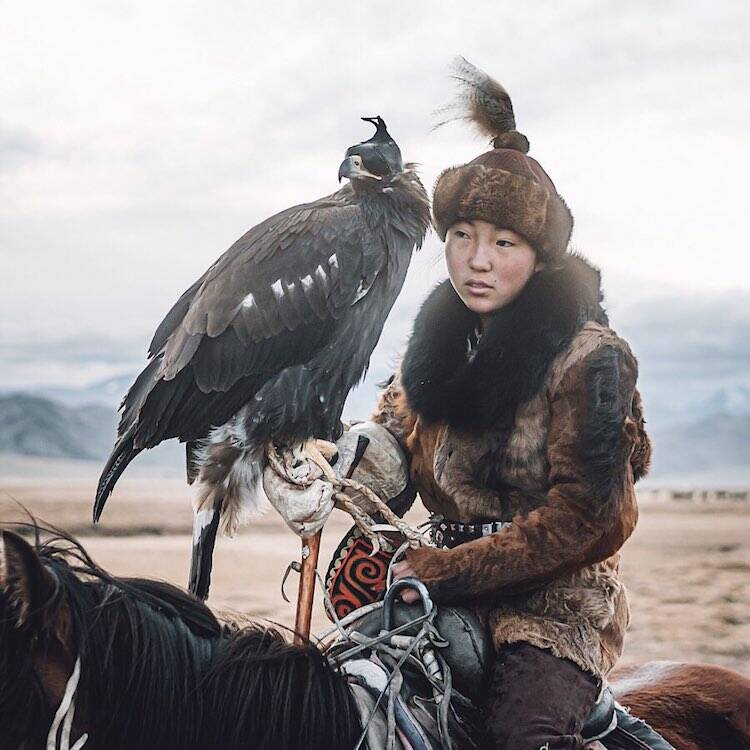 Deep in the craggy hills of Mongolia’s Altai region live a group of hunters with an extremely rare skill: hunting using golden eagles.

For centuries, nomadic tribes of the Altai region have trained their young men and women in the ancient art of golden-eagle hunting. They don’t hunt eagles, but rather use the revered golden eagle as their tool — and form a close bond with the bird of prey along the way.

Historically, the golden-eagle hunters – known as burkitshi – have been male, as the age-old art was traditionally handed down from father to son. Though, as with any male-dominated field, some women have risen and excelled.

In recent years, however, the number of female hunters has dwindled to the point of near-extinction. Today, there are only 10 female Mongolian golden-eagle hunters.

The Last Of Her Kind 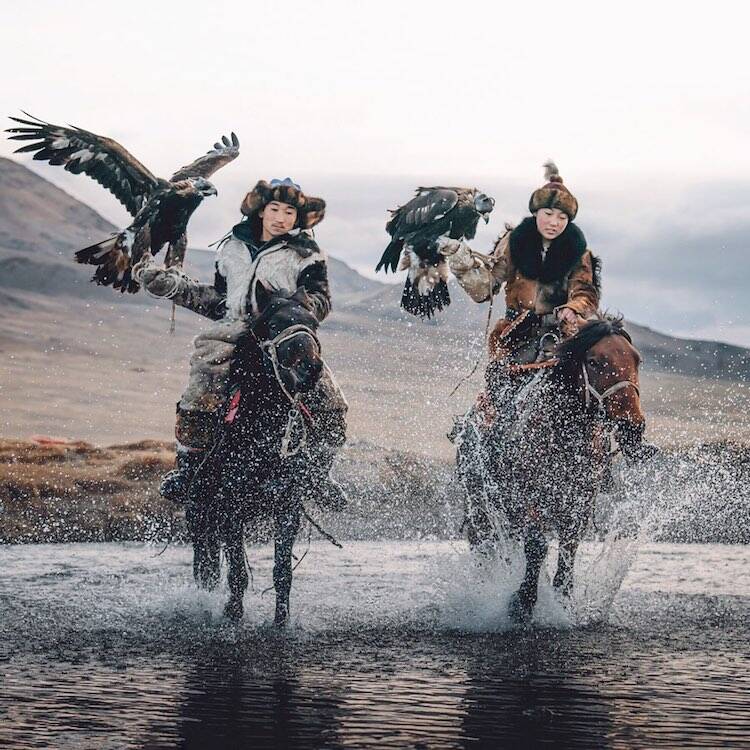 Leo Thomas/InstagramZamanbol hunting on horseback with her eagle, alongside her brother Barzabai and his eagle.

One of those huntresses is Zamanbol. A member of the Kazakh nomadic tribe, Zamanbol understands that she is a dying breed, but also has her hands full. Unlike the rest of her family, Zamanbol is not a full-time huntress. During the week she attends school in the city, and on the weekends she trains as a hunter.

That training hasn’t changed in millennia.

Even today, the hunters dress in traditional garb. Clothed in handmade furs and leathers and riding on horseback, the hunters and their eagles are almost as one.

Unsurprisingly, the bond between bird and human is incredibly strong. Most of the eagles are treated like family members, fed by hand and kept in comfortable quarters in the family’s home. The birds are captured at around four years old, the age when they are old enough to know how to hunt but young enough to adapt to human contact and bond with their hunter.

Children as young as 13 will be given eagles to begin their bond, which continues for the next 10 years. 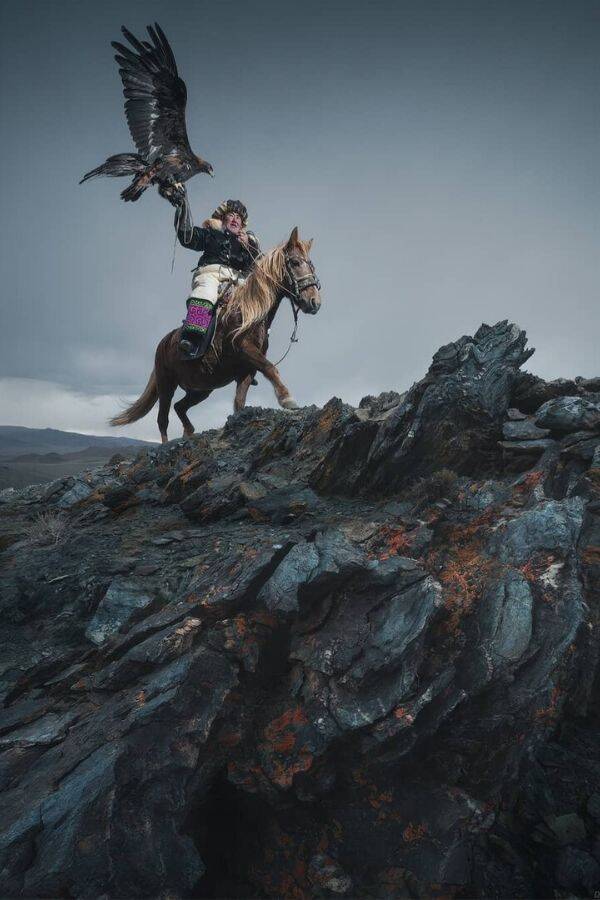 Zamanbol and her brother Barzabai both have strong bonds with their eagles, a bond which is demonstrated by their ability to seemingly communicate with the birds during the hunt, a process that is both physically and mentally demanding.

After trekking high up into craggy mountains and perching themselves atop a vantage point, the silent hunters gaze down on the valleys and plains below. Once a target (usually a small mammal like a hare or a fox) is spotted, they release the golden eagle perched on their arm.

The eagle — always a female, as they are the larger of the sexes and therefore the more adept hunters — then swoops down and captures the prey before it can escape, soaring back up to the mountaintops to give it over to its master. 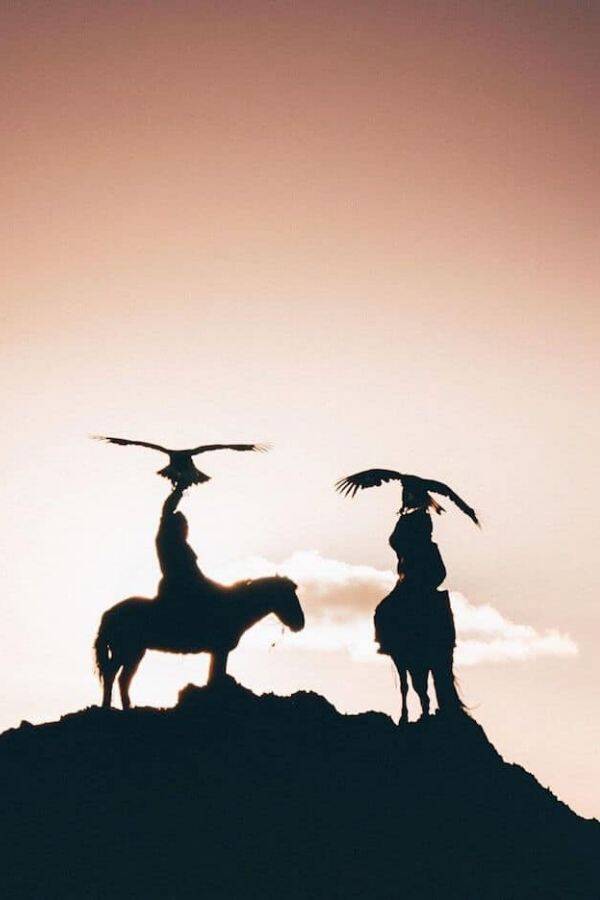 Two hunters lift their eagles to the sky.

Though the eagles have lifespans stretching upwards of 30 years, the hunters keep the birds captive for only a third of that time. Following a roughly 10-year period, the hunters release the birds to the wild, in the hopes that they will live out the rest of their lives freely.

But the birds often bond with their human so much that the hunter will have to travel far to set the bird free, and often hide until nightfall so the eagle doesn’t follow them home.

“It was as if a member of my family had left,” one hunter recalled of letting his eagle go. “I think about what that eagle is doing; if she’s safe, and whether she can find food and make a nest. Have her hunts been successful? Sometimes I dream about these things.”

While in the care of their human families, eagles’ bonds with their human companions are unshakeable. The hunters care for their birds almost as if they were children, swaddling them in leather during the winter months and cradling them after their hunts.

“They love to be carried in such a way,” one hunter told a photographer. “It makes them feel loved and relaxes them, just like a baby.” 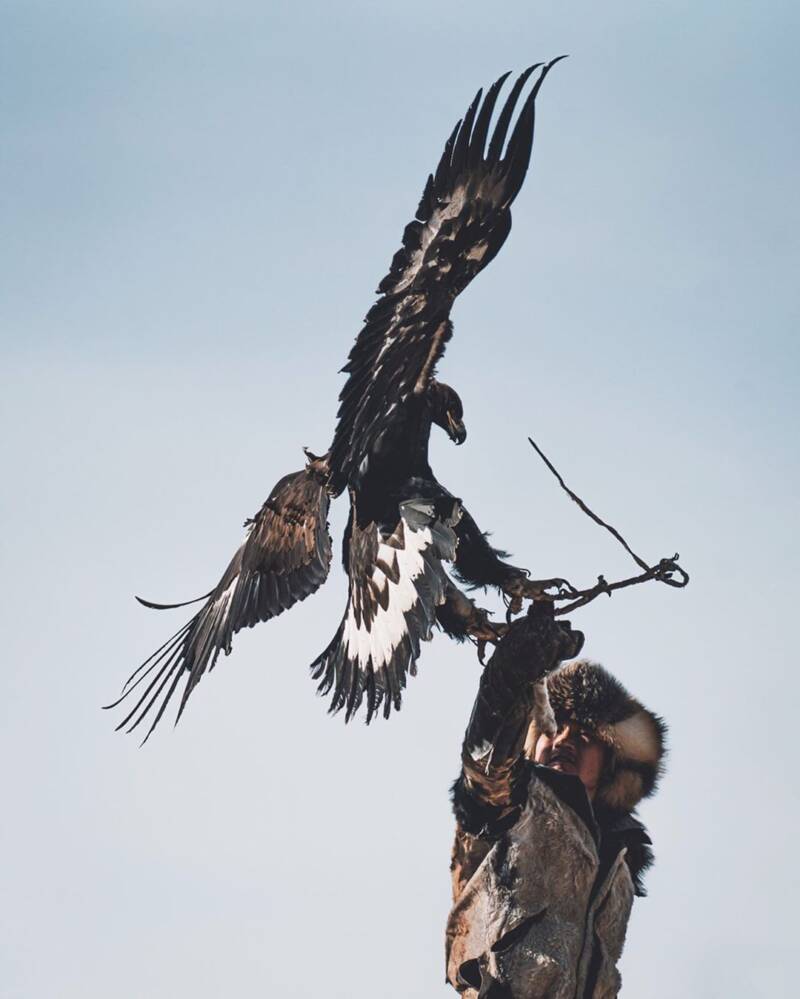 Leo Thomas/InstagramGolden eagles can take down small mammals like foxes, as well as goats and wolves.

Though the tradition is an ancient art, in recent years it has become a fascination for the western world, thanks to a 2016 documentary about a young and decorated eagle huntress named Aisholpan. What was once a secret experience has become the topic of festivals and documentaries, which have helped shine a light on a dying tradition of the old world.

Many photographers have made the journey to the Mongolian wastelands to witness golden-eagle hunting for themselves, and try to understand the magical relationship these hunters share.

They’ve also highlighted women like Zamanbol, who are the last of their kind. Though there were once dozens of female hunters, there are now only 10 in all of Mongolia.

Upon stumbling upon one of the last female hunters, German photographer Leo Thomas decided to showcase her, and her art, for the world to see.

Next, see Mongolia’s best eagle hunters compete at the annual Golden Eagle Festival. Then check out the Gurung honey hunters, another group of ancient (and interesting) hunters.