A young boy's passion — and his distraction in school — ended up turning into the job of his young lifetime. 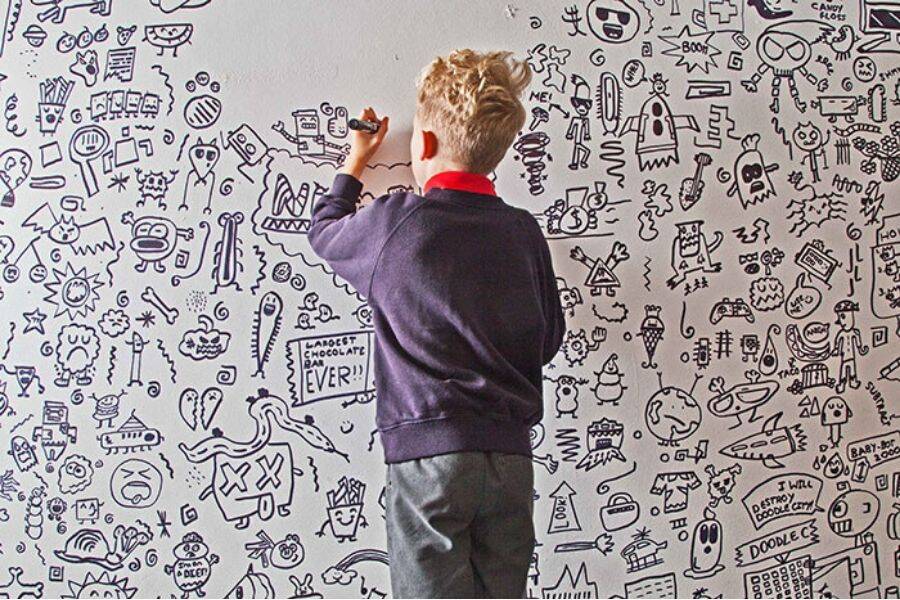 Doodle Boy/InstagramJoe Whale doodling on the wall at the restaurant, Number 4.

For many young children, concentrating during school can be difficult. There can be a lot going on, and sitting still can be hard to do. So some kids look for outlets for their creativity and their lack of attention.

When 10-year-old Joe Whale of Shrewsbury, England found it difficult to concentrate, he turned his attention to doodling. Using the front of his notebooks, extra scrap paper, and any other surface he could get his hands on, Whale doodled the day away, creating imaginative creatures, elaborate worlds, and wild storylines.

His teachers noticed immediately and were none too fond of Joe’s affinity for using his math book as a “doodle book.” Before long he’d been branded a trouble maker and a problem child at school.

His parents, however, had a different approach. Rather than discipline the young boy for what was clearly a burgeoning talent, Whale’s parents enrolled him in an after-school art program. 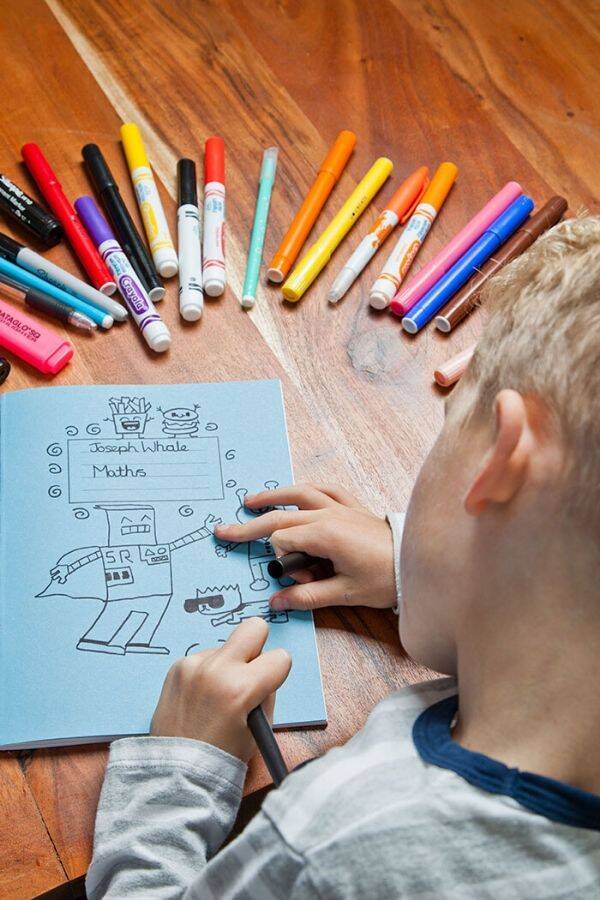 “One day, he came home from school a bit deflated because they weren’t doing much art, so we decided to find him some extra art classes,” his father, Greg, told Insider.

Instantly they knew they had made the right decision. His art teacher was so impressed by his skill that she started sharing his designs on her own social media accounts. A local restaurant, Number 4, took notice of the boy’s designs, and reached out with a job opportunity.

The restaurant’s newest location had an eight-foot white wall that was in need of a bit of decorating, and Joe Whale’s doodles were just the thing Number 4 was looking for.

Though the family was excited about Joe’s opportunity, Greg couldn’t help but feel a little apprehensive. 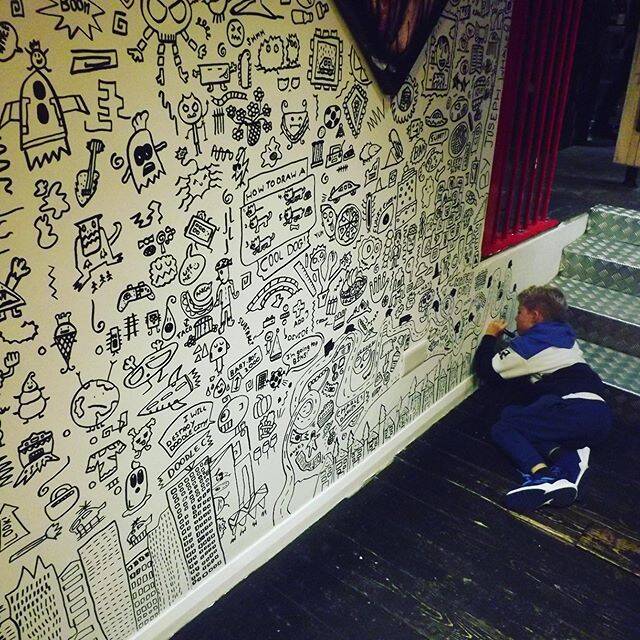 “When I got there and saw what they wanted him to do, I thought, ‘Joe doesn’t like to duplicate drawings, so how is he going to fill an eight-foot wall without having to duplicate his doodles?'” Greg Whale said. “But literally, Joe seemed to get better and better. It was sparking even more creativity because of the scale of the wall. It was unbelievable to watch.”

In about 12 hours, spread out over several days, Joe Whale doodled his way across the wall, armed with his favorite medium: black markers.

“I like Sharpies and Paper Mate pens,” Joe told Insider. According to his parents, he prefers to work in black and white, sketching his original creature creations and doodles in stark contrast to the white wall. 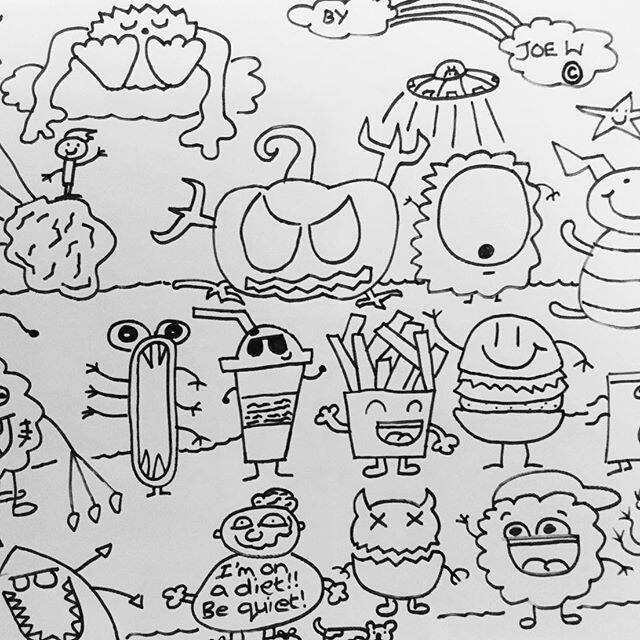 While Joe worked intently, his parents watched in wonder. While they knew Joe was passionate about his doodling, they weren’t sure he’d be able to focus enough to get the whole wall done. But Joe never once looked like he wanted to give up.

“I was sitting there in awe a little bit,” Greg said. “He would look back at the wall like he was stuck, sigh a little bit, and go back and come up with 20 more images at once.”

After he was done, Joe’s parents expressed their delight at their son’s ability to turn his passion into a successful project.

“Joe loves doodling and we’re so proud of everything he’s achieving,” Greg told Bored Panda. “The fact that a completely independent business has asked our 10-year-old son to do a professional piece of work for them is incredible.” 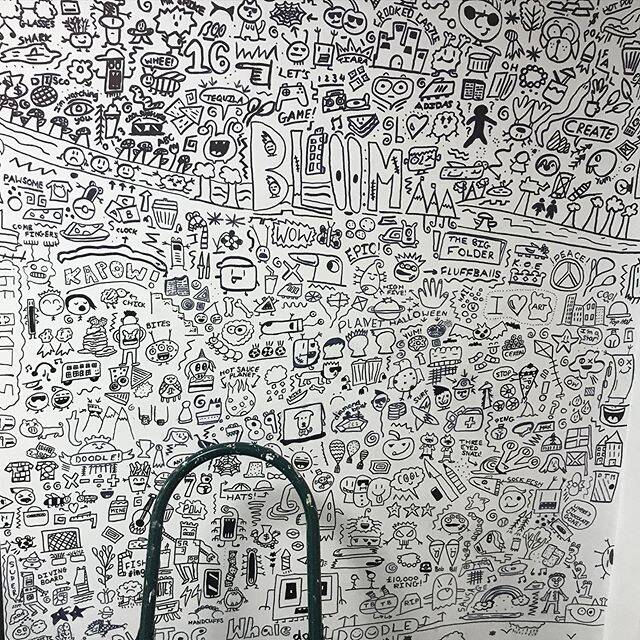 Doodle Boy/InstagramYoung Joe Whale is able to come up with a seemingly infinite array of original characters at the drop of a hat.

Since Joe’s successful first endeavor, his work has gone viral. Known on the internet as Doodle Boy, his creations have been showcased on social media and art appreciation websites across the web. His parents have also created a website to showcase his work, and made certain doodles available for sale.

“We just thought if there’s an opportunity to help Joe moving forward to do whatever he wants to do, we should put in every effort to make that happen,” Whale said. “We just post some doodles that he does and that he wants to share.”

Joe’s parents told Insider that any profit they make off of Joe’s work is going to fund his education, and — eventually, hopefully — his university.

Joe’s story has inspired a wave of support from parents whose own children have found it hard to concentrate in school. Many parents have shared their own stories of schools punishing children for what turned out to be incredible gifts, and voiced their support and appreciation for the Whale family. 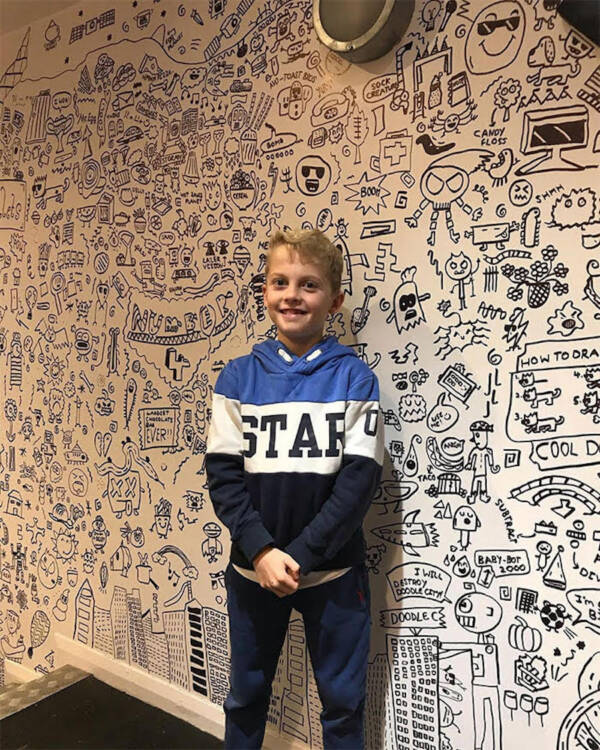 Doodle Boy/InstagramSince decorating a local restaurant, Joe Whale has started his own website where he sells his drawings.

The Whales have taken their support in stride, and have become determined to advocate for all of their children’s interests.

“I would advise parents to encourage their children to always follow their passion and dreams,” Greg told Bored Panda. “Research local workshops or groups within your local community.”

Enjoy reading about the Doodle Boy? Check out some of the world’s most talented kids. Then, meet Stephen Wiltshire, the autistic artist who can draw entire cities from memory.