The egg measures approximately five inches in diameter with hardened sediment on one side. Officials found it encased in bubble wrap inside an international e-commerce package. 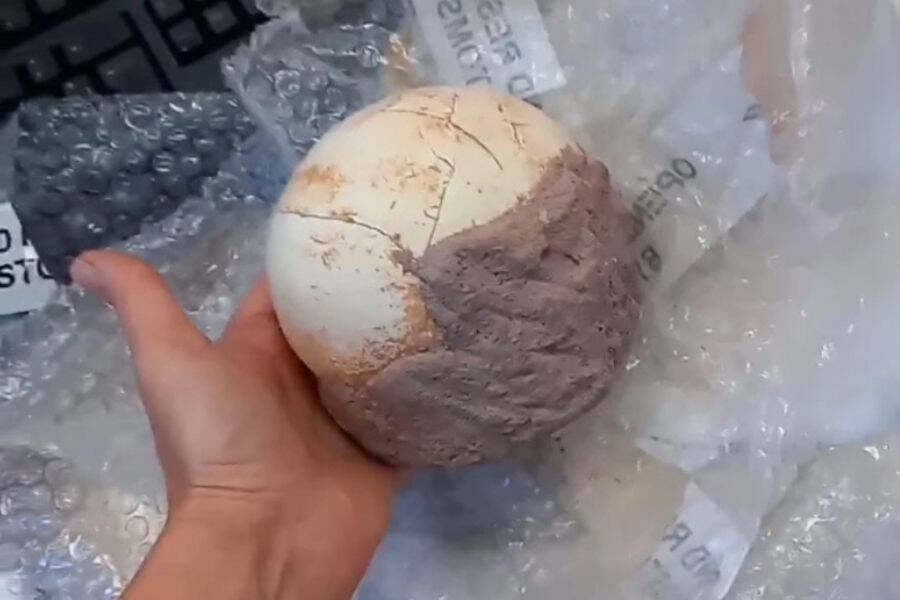 Customs and Monopolies AgencyThe Shunosaurus egg after Sunday’s confiscation in Bergamo. The egg had been mailed from Malaysia.

On Sunday, June 13, Italy’s Customs and Monopolies Agency in Bergamo announced a staggering find on Facebook. Officials at the city’s international airport had discovered a prehistoric dinosaur egg that had been illegally shipped into the country from Malaysia.

Italy’s Superintendency of Archaeology, Fine Arts and Landscape have since identified the egg as that of the Shunosaurus species, which roamed the Earth 159 million years ago during the late Jurassic or early Cretaceous Period.

“As part of checks on e-commerce goods aimed at fighting the illegal import of goods, we found an authentic fossil egg embedded in a rocky sediment inside a package… accompanied by a certificate of origin with dubious authenticity issued by an organization which was later found to be non-existent.” 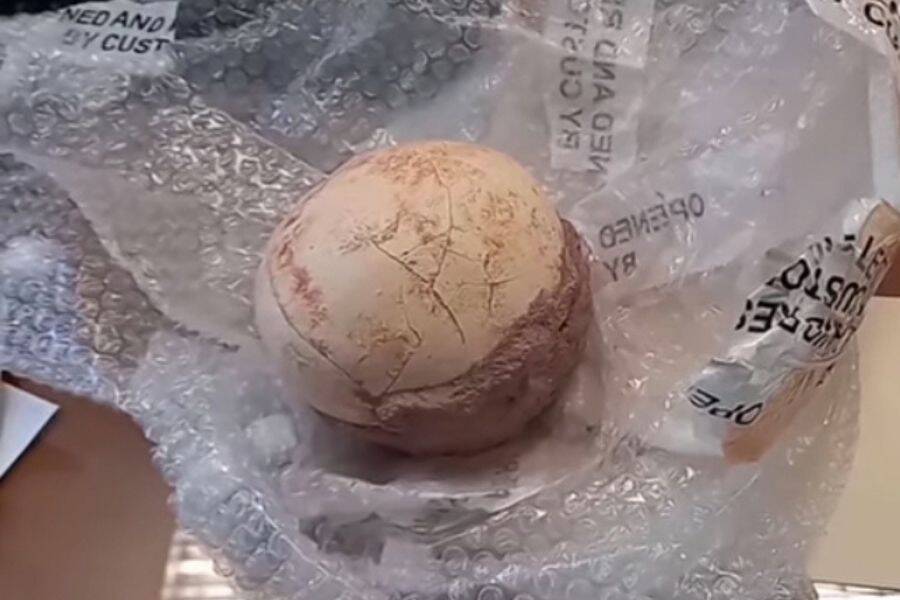 Officials discovered the egg in a standard brown cardboard shipping box that had been sorted into the international e-commerce customs section. The egg measures approximately five inches in diameter and was found encased in bubble wrap. It was fossilized with a hardened sediment on one side.

The discovery in Northern Italy was all the more astonishing for stemming from a mundane and routine customs check. The package, they said, had come from Malaysia to Bergamo, though they believe it may have originally been sent from China and was merely routed through Malaysia.

Customs officials were unable to trace the sender, but did manage to contact the intended recipient, who they said renounced the shipment, allowing them to place the egg in a “state of abandonment” and turn it over to the state. The Italian government has said they intend to put the egg on display in a natural history museum.

Paleontologists only discovered the Shunosaurus in China in 1977, classifying it formally in 1983. The name means “Shu lizard,” with “Shu” being an ancient name for Sichuan, the Chinese province where the first fossil was found. 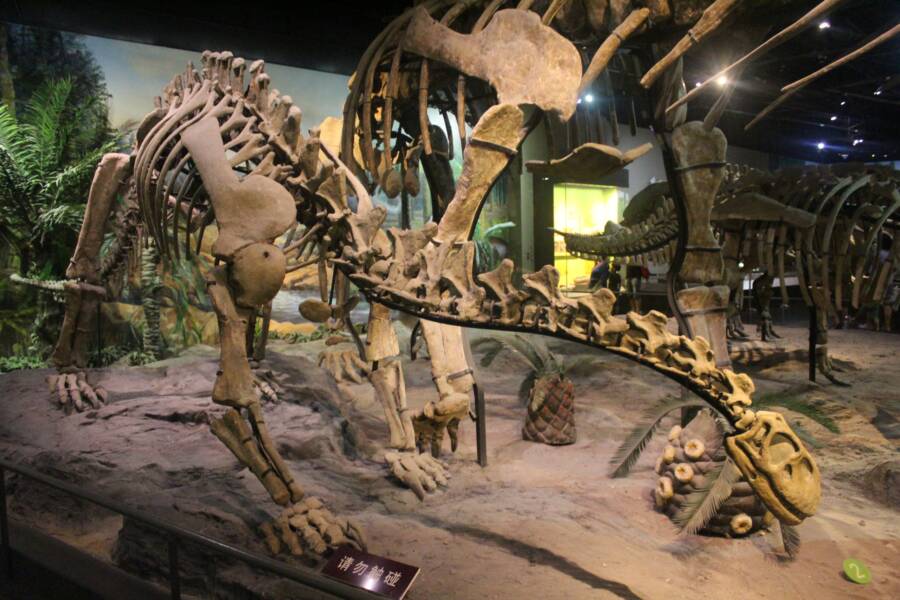 Those fossils revealed it to be a 32-foot-long dinosaur — placing it firmly in league with the largest animals in the history of our planet.

According to an article published in the Zoological Journal of the Linnean Society, the discovery of several well-preserved Shunosaurus skeletons in China provided paleontologists with the necessary information to properly study early sauropods in general.

While sauropods are known for small brains in relation to their large bodies, the Shunosaurus distinguished itself as unique among its peers with a hard, bony cluster of cartilage at the end of its tail that ended in two successive spikes measuring about two inches long. Researchers believe they were used to fend off predators.

Fossilized remains of the Shunosaurus species are extremely rare. Organizations all over the world, such as Italy’s Superintendency of Archaeology, Fine Arts and Landscape consequently try to thwart traffickers aiming to profit from their sale. 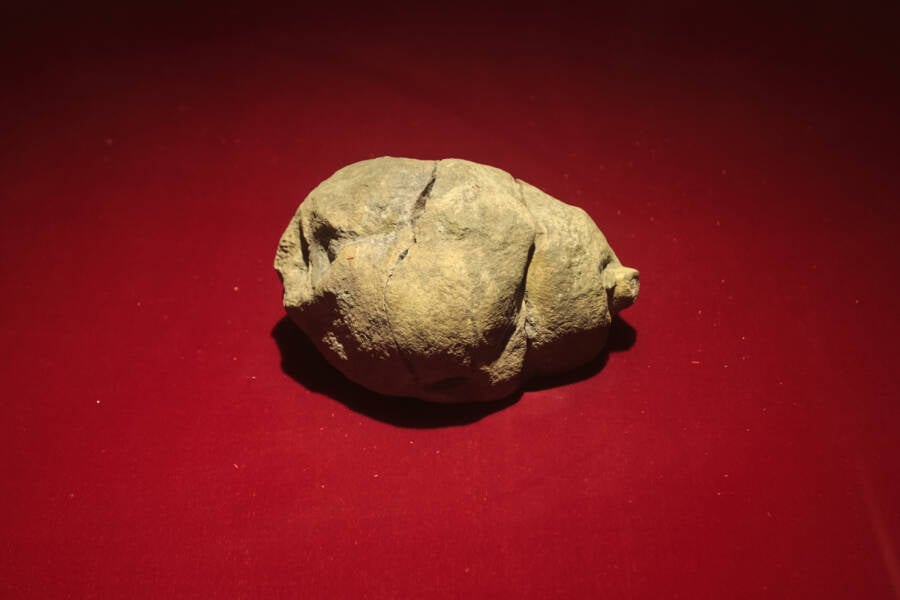 That isn’t to say illegal traffickers don’t still try. In 2007, the U.S. Immigration and Customs Enforcement agency discovered a staggering 22 dinosaur eggs at a California auction house. Those unhatched relics were suspected to have come from China, as well.

While that certainly seemed like a victory, the dinosaur smuggling business is more expansive than might be assumed. In 2012, federal agents arrested a fossil trafficker named Eric Prokopi — who cooperated with authorities upon facing severe charges and revealed how large the trade truly was.

According to The New Yorker, agents discovered nearly three thousand pounds of bones in Prokopi’s backyard, including the fossilized remains of a Tyrannosaurus rex. With his help, officials were able to trace various smugglers to China, Argentina, and within the United States.

“The government’s only recently realizing the contours of that black market, and what it is,” said assistant U.S. Attorney Martin Bell.

After reading about the dinosaur egg being smuggled into Italy, read about how smugglers were caught trying to bring $3.1 million worth of rhinoceros horns through a Malaysian airport. Then learn about the Nodosaur dinosaur mummy found with its guts and skin intact.