Soaring above Sri Lankan skies, the Sigiriya palace reminds us of the rewards--and costs--of power.

Rising out of the jungle in the very center of Sri Lanka, Sigiriya is what remains of an extinct volcano. From base to height, this tower of hardened magma stands 600 feet tall, and archaeological evidence shows that human communities have lived here for around 10,000 years. 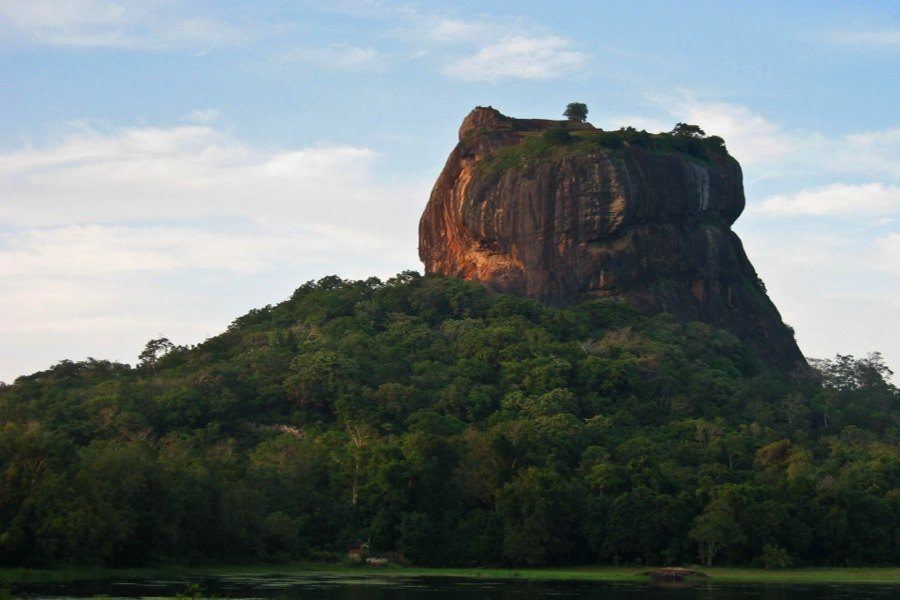 But the reason that the Lion Mountain, as its name translates, draws more tourists than any other site in Sri Lanka today is that an ancient prince built his palace here after killing his father and stealing the throne from his brother.

The prince’s name was Kassapa (sometimes written Kasyapa). He lived at the end of the 5th century, and though based in fact, his story has also likely been distorted by legendary embellishments over the last 1,500 years.

Like a villain in one of Edgar Allan Poe’s short stories, Kassapa is said to have sealed his father behind a stone wall while he was still alive and left him there to suffocate. The murderous prince then orchestrated a coup to steal power from his brother, Moggallana, who ought to have been next in line for the throne. Moggallana escaped death by fleeing to India, and Kassapa, now unopposed, established his court at Sigiriya. 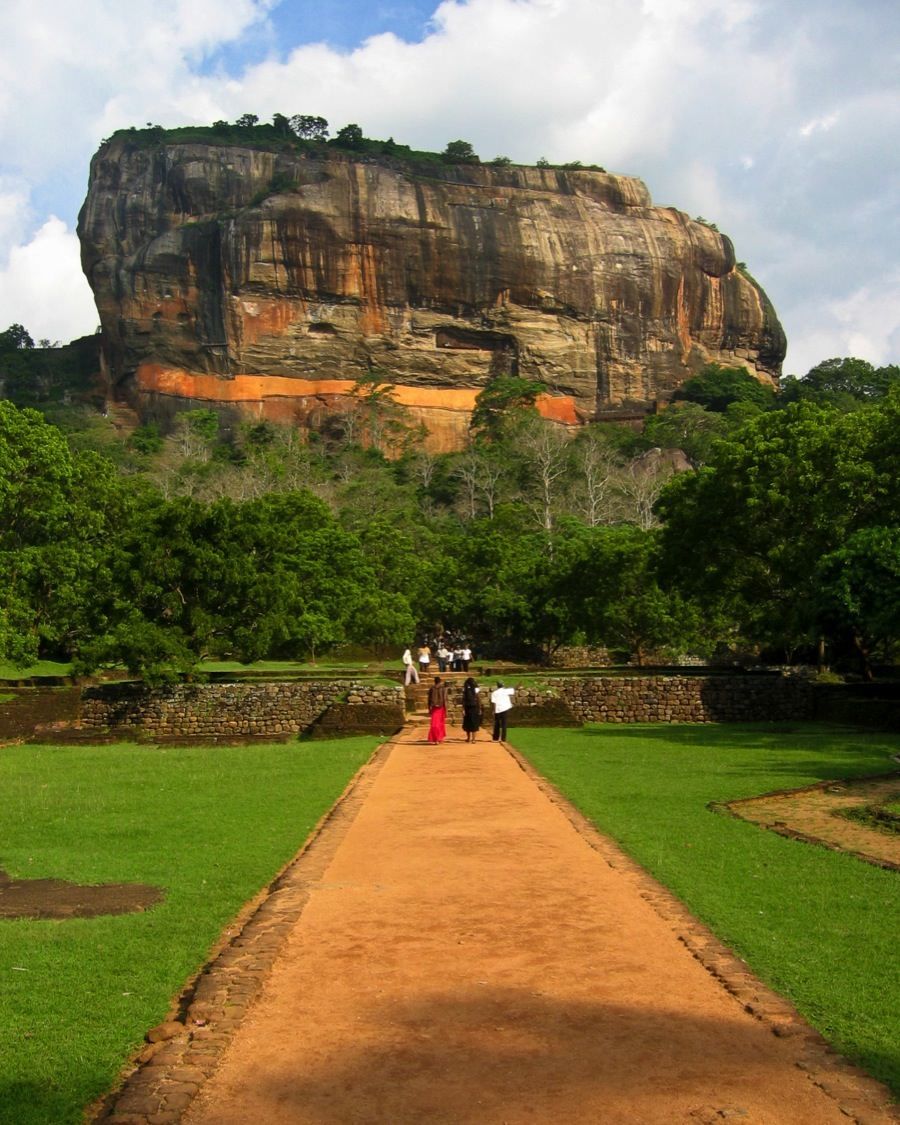 During his reign, Kassapa oversaw lavish architectural and artistic projects, the most important of which are described below. But in the end, things didn’t turn out well for the patricidal pretender to the throne.

His brother, Moggallana, eventually returned with an army and defeated him. There are competing versions of how Kassapa died, but all are bloody. One story has Kassapa killing himself after losing a battle by falling on his sword in shame. Another has him slitting his own throat. In yet another version, one of his concubines stabs him to death.

Maidens, Mirros, And A Giant Lion

Before Kassapa’s arrival, the tower of reddish stone had been a center of Buddhist monastic life for at least 700 years. But when the new king moved his court here, this spiritual refuge became the seat of secular power. 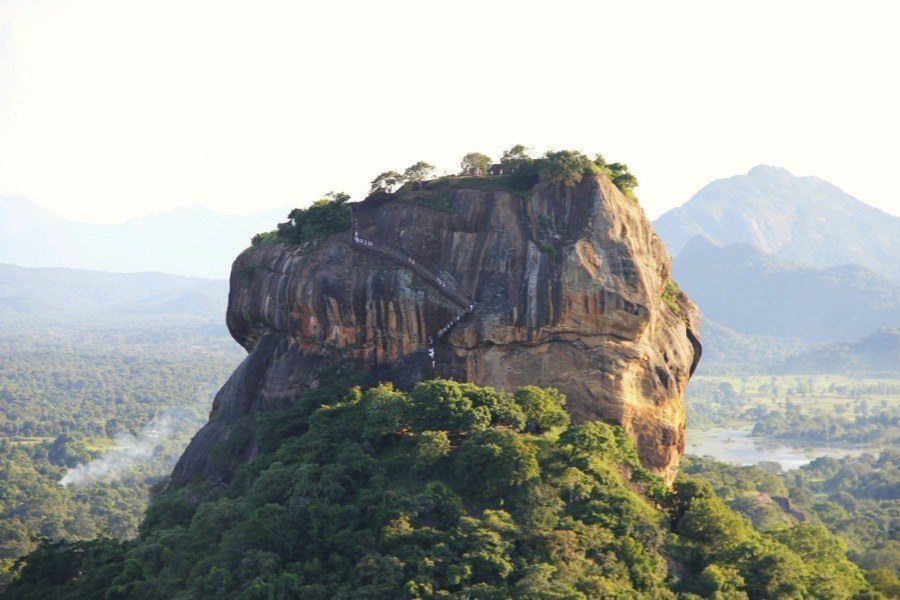 Kassapa oversaw a transformation of the mountain itself into a palatial fortress where, at the summit, he held court. Visitors wishing an audience with him would have had to climb hundreds of stone stairs, and along the way Kassapa made sure they would see displays of his wealth and status.

Though worn down by time, these lavish architectural and artistic projects still greet visitors to this UNESCO World Heritage site today.

On the way up to the Sigiriya palace, 5th century visitors would have seen a remarkable series of frescoes depicting beautiful women in fine jewelry and green and orange sarongs. Sometimes called the Sigiriya Damsels or the Maidens of the Clouds, these mostly topless figures were originally painted in the 5th century, likely during Kassapa’s time in power.

Once thought to represent royal concubines, the images are almost certainly paintings of apsaras, the celestial spirits that appear in Hindu and Buddhist temples throughout South and Southeast Asia. Like their spiritual sisters at Cambodia’s Angkor Wat or the Ajanta Caves in India, the apsaras of Sigiriya wear ornate headdresses and boast large breasts and slender waists. Sadly, their numbers have dwindled since the age of Kassapa. Out of the hundreds of figures that once decorated the walls and passageways of the palace, just over twenty have survived the centuries. 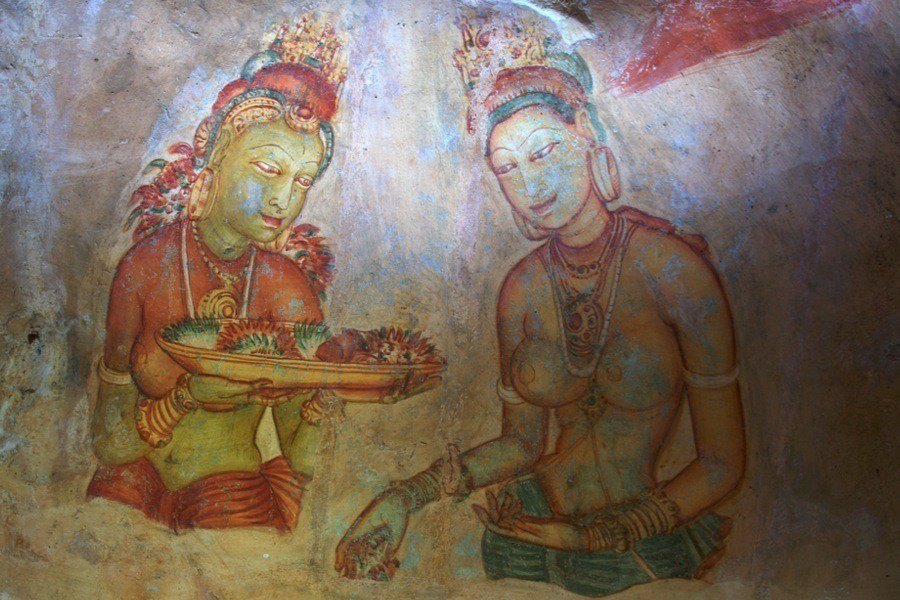 After passing the maidens, visitors would continue their ascent alongside a massive reflective wall. Scholars believe the surface was coated with “a special plaster made of fine lime, egg whites, and honey… then buffed to a brilliant luster with beeswax.” At this point, visitors had risen above the heights of the trees, and it must have been an impressive sight to look into their own reflections and see the lush vistas of the jungle behind them.

A little more than halfway to the summit, before the final ascent, a large, flat outcropping juts out from the mountain. Kassapa had made ambitious plans for this elevated setting: a giant lion staring out over the jungle, with the stairway to the summit potentially passing through its yawning mouth.

Builders started work on this final feat, but it was never completed. Construction on Sigiriya palace likely stopped after Kassapa met his bloody death. The only evidence of the project is the lion’s paws, which still stand to this day, abandoned to time like the “vast and trunkless legs” of Ozymandias. 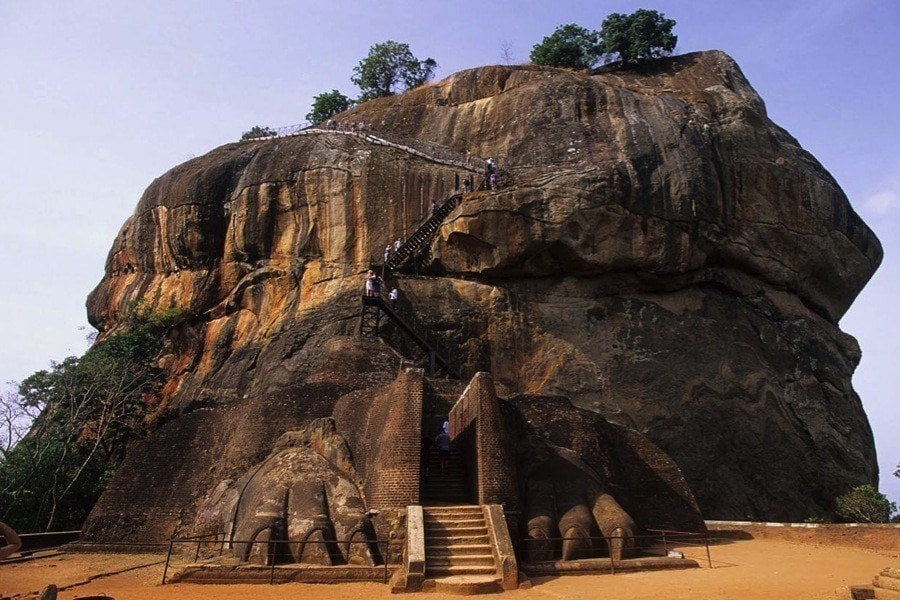 A complex of royal buildings once stood at the summit. Today, only the foundations remain. Still, the views from the top of Lion Mountain are no less spectacular than they must have been centuries before. 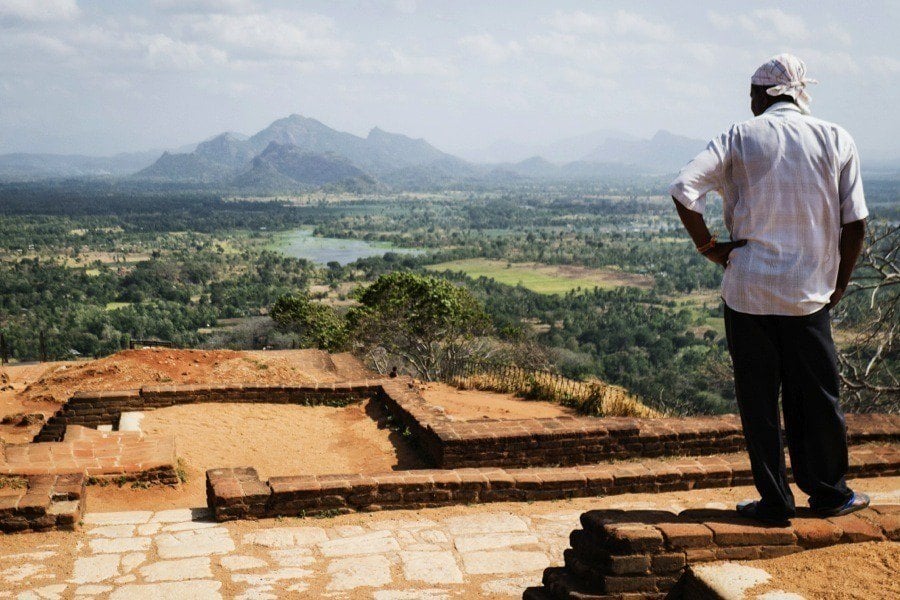