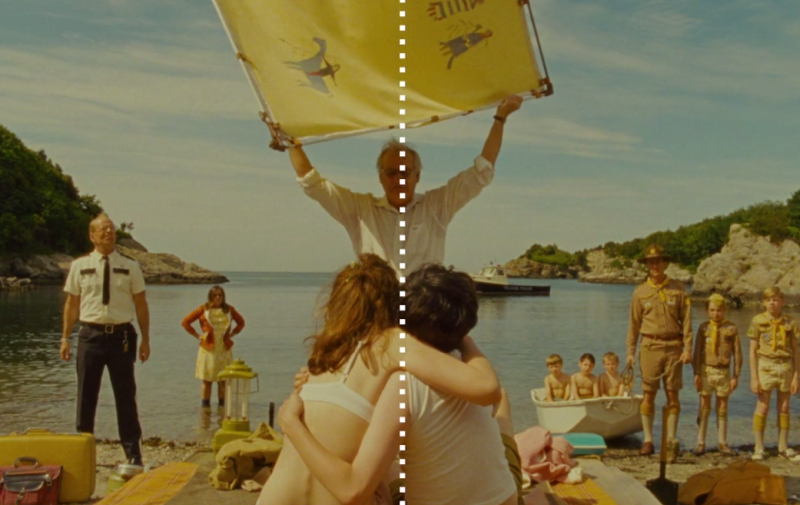 Auteur theory makes the contentious case that a film’s creative vision and complexity can be credited to the director. Since such a theory implies that actors and other crew members working on the film are of little consequence, the theory remains hotly debated and criticized. However, as these seven signature directorial shots suggest, the argument does have its merits.

Nolan loves to turn our character beliefs on their side, and does so a very lateral way. Cinephiles have seen his elaborate camera roll a number of times, perhaps most famously used in Inception but more recently in The Dark Knight Rises. Due to its complicated execution, (sometimes requiring a rolling set) most lower-budget filmmakers can’t afford this level of commitment to disorientation. However he chooses to move the camera, Nolan is always feeding into his character’s delusions (and ours) in one way or another.

Wes Anderson is not just a director; he’s an aesthetic. Easily one of the most stylish directors working today, Anderson’s conglomeration of purposeful artistic choices (namely symmetry and a good use of color) can be spotted from a lineup in mere seconds. Simple symmetry is achieved by shooting subjects straight on – reminiscent of a painting instead of a three dimensional film – and that’s how he and his narrative tendencies like it.

Though Tarantino didn’t invent this camera angle, he uses it so much that you wouldn’t be in the wrong for thinking that he did. The low-angle perspective is used in Reservoir Dogs, Pulp Fiction, Jackie Brown, From Dusk Till Dawn, and Kill Bill, and is adapted differently (but still present) in Death Proof and Inglourious Basterds. Seems simple enough, but actually fitting a camera rig and operator inside a trunk is pretty difficult, so most of the shots where you see the trunk opening it has been staged with spare car parts.

Another way to use the camera dolly track is to have the actors also hitch a ride on it, which Lee does to great effect. The floating scenes are in all but three of his films, though critics of this signature shot complain that it takes them out of the story.

Lee is no stranger to flourishes that remind you that you’re watching a film and not actually IN the film, such as documentary footage or “breaking the fourth wall”, which is when a fictional character addresses the audience or their creator. Though he is better known for his controversial subject choices than his techniques, this shot screams Spike Lee.

Often referred to as the “Hitchcock zoom”, the dolly zoom is the act of continual perspective distortion by means of moving the camera away while simultaneously zooming in, or vice versa. This is done most easily with a camera dolly for a smooth line and transition, and was first employed on the set of Hitchcock’s Vertigo, which helps to drive home the feeling of the disorientation associated with the ailment. It went on to become a go-to camera move used in many subsequent movies, but the actual credit goes to Paramount second-unit cameraman Irmin Roberts, who came up with the history-making technique but wasn’t even credited in the film.

Remember back in art class when you learned about perspective and planes converging into a vanishing point? Kubrick knows that it draws the eye in and lends itself to creepy moments, of which he certainly has a few. This perspective shot also aids in creating symmetry, which can be considered as another Kubrick specialty.

David Fincher: What he doesn’t do.

Does what you leave out constitute a style? In David Fincher’s eyes, the answer is yes. Said Fincher, “they know you can do anything, so the question is… what don’t you do?” For Fincher, his list of “don’ts” includes handhelds, close-ups, and a score of others. Watching Tony Zhou’s explainer video makes you realize that there’s a lot more to directing than having a signature shot or great equipment, especially when the term “style” in film is heavily synonymous with purpose.