When she was just 18 years old, Simone Segouin joined the French Resistance to capture Nazi troops, sabotage German plans, and fight against fascism in her home country. 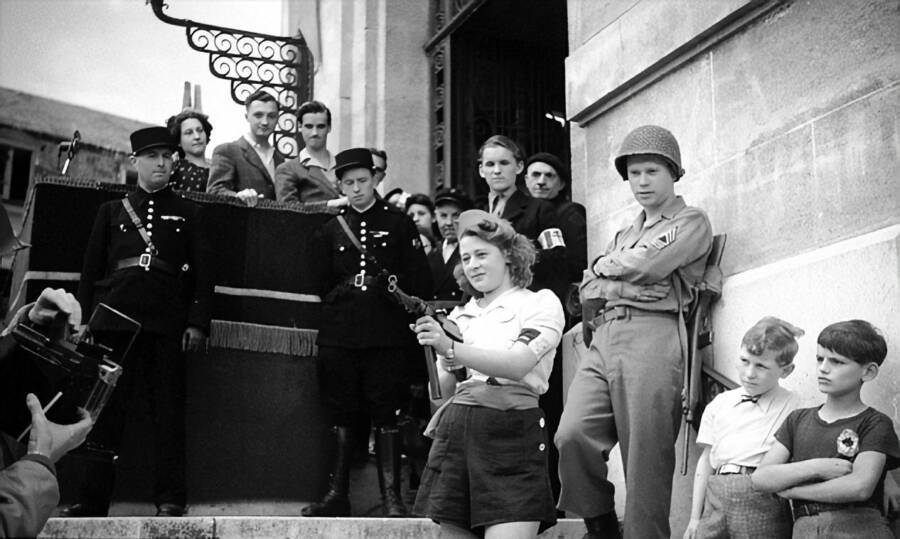 FacebookSimone Segouin poses for photographers during the liberation of Chartres.

It’s a common misconception that World War II was fought entirely by professional armies and that civilians cowered in their homes, were caught in the crossfire, or taken to concentration camps. The story of Simone Segouin reveals the truth — that people of all stripes resisted the Nazi’s brutal invasion.

Segouin was only 14 years old when Nazi Germany invaded her homeland of France and forced her to drop out of school. As part of the French Resistance, however, she would receive a different type of education. Segouin not only learned how to wield machine guns, but derailed trains, killed and captured Nazis, and liberated her hometown of Chartres — all while barely an adult.

Much has been written about the Allied soldiers who fought Adolf Hitler’s takeover in Europe, and because Segouin and her comrades weren’t officially enlisted, their story has gone largely untold.

Were it not for the September 1944 edition of LIFE magazine, none of her contributions to the Allied war effort would’ve been remembered. Photographed holding a machine gun in shorts and a beret, her story spread far and wide, and it remains just as unbelievable now as it was then. 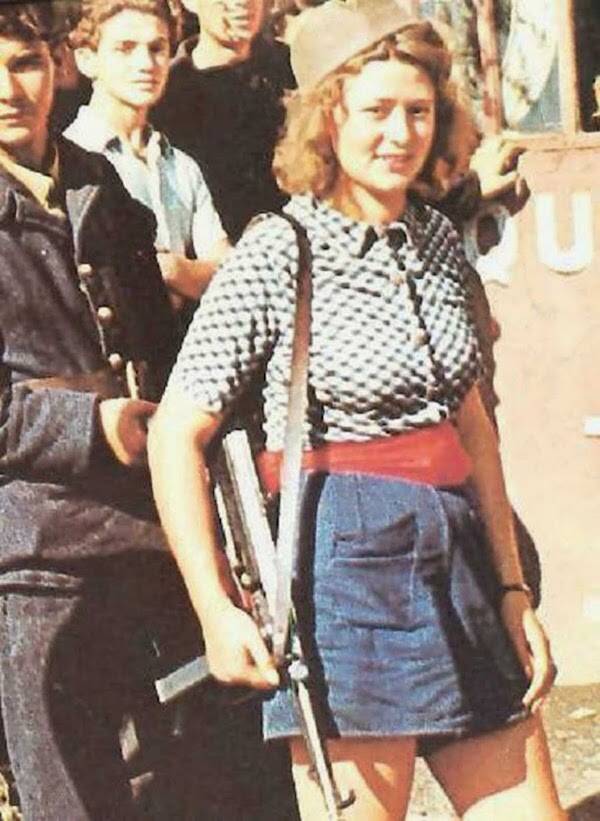 Born on Oct. 3, 1925, in Thivars, France, Simone Segouin grew up on the outskirts of Chartres, about 50 miles from Paris. She was largely raised by her father, a decorated World War I veteran.

With the rise of fascism in Europe and a volatile economy, Segouin was taught how to defend herself by her three brothers.

When Adolf Hitler assumed power in 1933, Segouin was eight years old at the time, and she continued to attend school like the rest of her peers. The family retreated to their countryside farm in May 1940, however, when Nazi Germany invaded France. Segouin was 14 and left school forever. 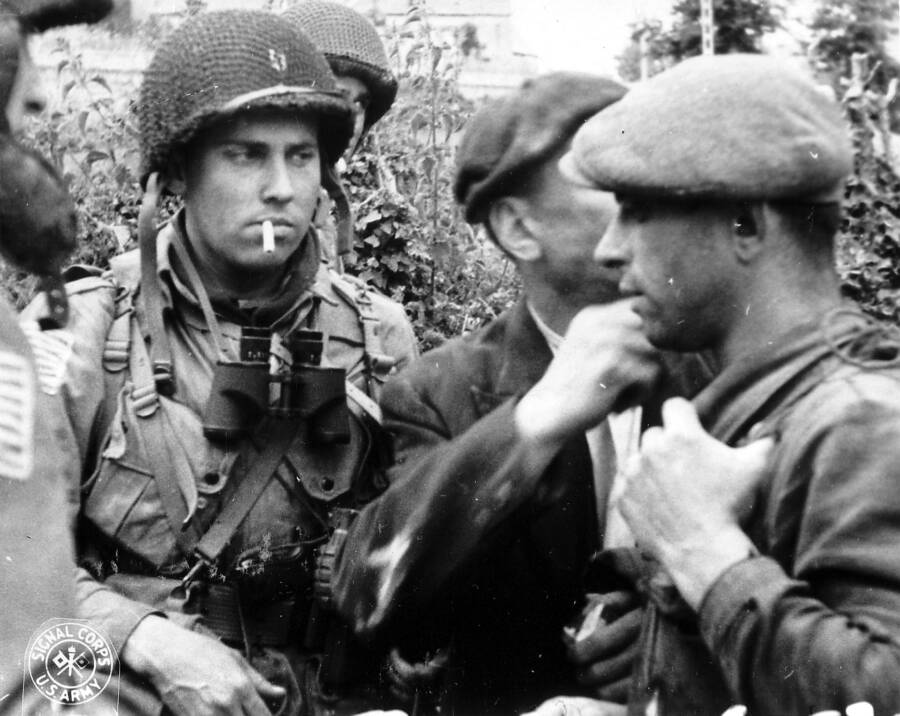 Wikimedia CommonsAmerican soldiers and FTP members during the Battle of Normandy in 1944.

In 1943, Segouin met Lieutenant Roland Boursier, an ex-engineer recruiting brave youths to join in the French Resistance against Hitler.

Boursier had joined the “Francs-tireurs et Partisans,” or “Free-shooters and Partisans” (FTP), a communist resistance group dedicated to the fight against fascism. He had become a high-ranking chief there but retreated to the countryside, where he met Segouin, after shooting a traitorous Frenchman.

“I studied her for a while to see what were her feelings,” Boursier later admitted. “When I discovered she had French feelings I told her little by little about the work I was doing. I asked her if she would be scared to do such work. She said, ‘No. It would please me to kill Boche [German soldiers].”

Segouin thus committed herself to Boursier’s training. He taught her how to operate a German Schmeisser MP-40 submachine gun, which Boursier had confiscated from an unlucky Nazi, and provided her with a secret identity as “Nicole Minet,” before welcoming her to the group.

Her Contributions To The War 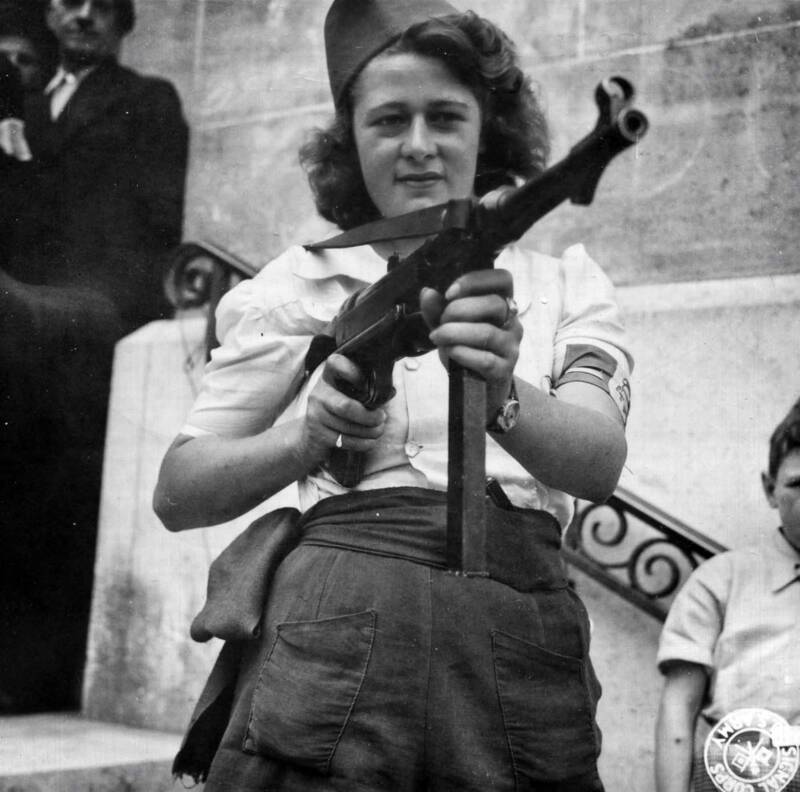 Wikimedia CommonsSegouin in Chartres on Aug. 23, 1944.

As Nicole Minet, Segouin could fight the Germans without risk of capture or endangering her family. Her new papers showed her to be from Dunkirk, which had just been bombed, making her documents difficult to verify.

With a new nom de guerre and weapons training under her belt, Segouin’s work against the Nazis could begin.

Her first task was to steal a German administrator’s bicycle, which she did successfully and then repainted it. Bikes were the most common way for people to get around Nazi-occupied France, as the Nazis had laid claim to all cars and public transportation had largely been shut down. With a bicycle, Segouin could travel freely.

The new reconnaissance vehicle also allowed her to efficiently deliver messages between planques, or hideouts, that the group established across town. Segouin’s own farm became a hub to discuss operations. Boursier had grown the FTP from one mass of 40 people into four sizable groups, with Segouin as the intermediary between them all.

Her reliability was noted, but guarding her comrades as they rigged one of the primary railroad routes from Paris with explosives truly distinguished her. 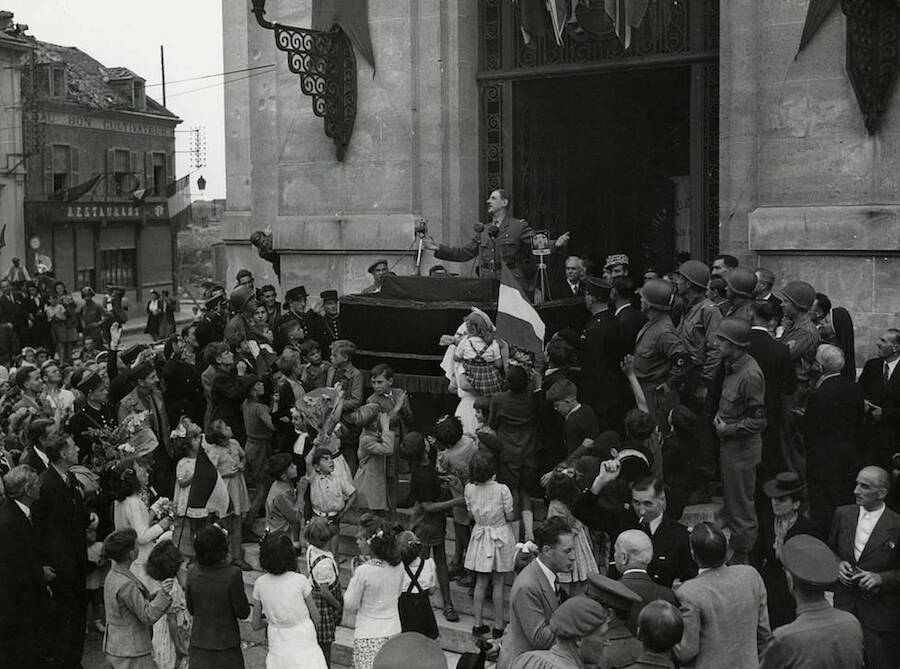 City of ChartresGeneral Charles de Gaulle speaks at the liberation of Chartres on Aug. 23, 1944.

Segouin’s wish to kill Boche came true shortly after that. Camped out in a ditch on the side of a road on July 14, 1944, she and her two comrades spotted two Nazi soldiers approaching on bicycles. Segouin and her partners opened fire, killing the invaders. She then confiscated the Nazis’ papers and weapons and secured them in her home.

She later admitted that “One of the best days was when we arrested 25 German soldiers towards the end of the war. It felt good as we knew we would soon have our country back from occupation.”

Her most noble efforts occurred the following month, however, during which photographer Robert Capa captured and printed her image for LIFE magazine. He spotted Seguoin eating a sandwich and carrying a machine gun as the town of Chartres celebrated its impending liberation on Aug. 23, 1944.

The two spoke as flags were unfurled from windows. Women who had taken up with Nazi soldiers during the occupation were being carried into the streets to have their hair forcibly sheared off.

Capa asked to continue interviewing her over dinner, but then she was whisked away by another resistance fighter who told her that a group of Nazis was found hiding in the woods. She took off, but Capa found her later the next day. 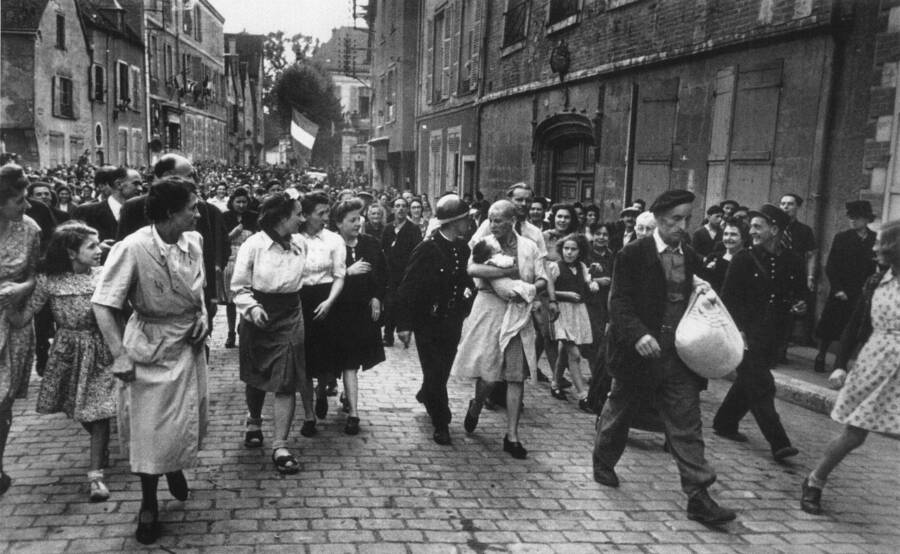 Twitter“The Shaved Women of Chartres” by Robert Capa. These women were punished by their neighbors for taking up with enemy German soldiers.

He saw her trading her pistol for two German rifles with an American soldier at the Chartres Church.

“It was a good bargain,” she told him. “He wanted a souvenir and we needed guns.”

In a succinct representation of her integrity, Segouin once again departed in order to attend a funeral for the dead residents of Chartres.

She was later awarded the Croix de Guerre, a French honor, for her aiding in the liberation of Paris two days after Chartres was freed. She said she stood by famed French general and eventual provisional president of France Charles de Gaulle as a part of his security outfit. 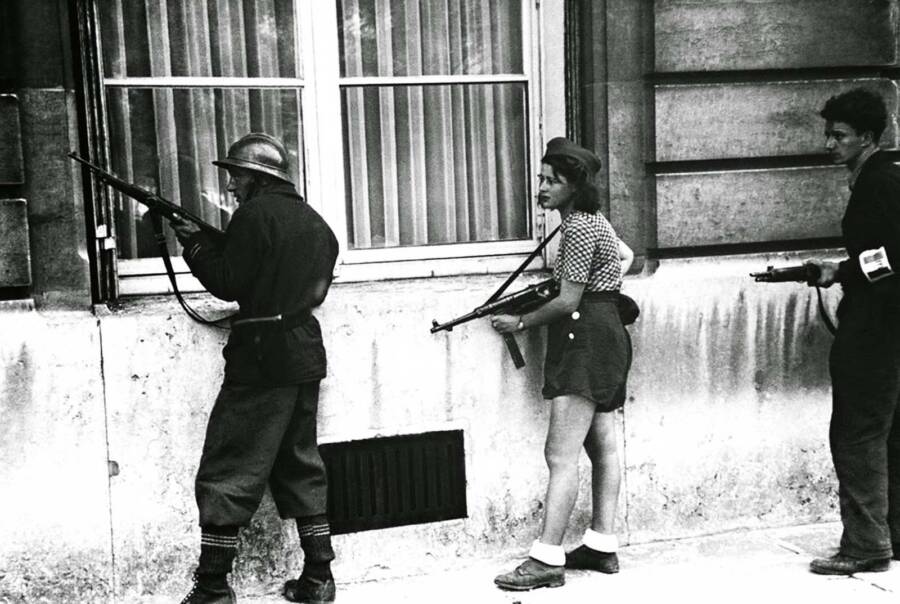 FacebookSegouin and her comrades during the liberation of Paris on Aug. 25, 1944.

Segouin’s later years were deservedly less dangerous, though her service never ceased. She became a pediatric nurse in her hometown and married the man who taught her everything about war: Boursier. While she had six children with him, she never took his name.

“I’m very glad to know that people are not indifferent to this period of my life,” she later said about her time in the resistance. “I was fighting for the resistance, that’s all. If I had to start over, I would, because I have no regrets. The Germans were our enemies, and we were French.”

Segouin was recognized by the British charity organization Soldiering On in 2016. She was a 90-year-old nursing home resident at the time, and she graciously accepted the honor and reminisced about the liberation of Paris.

“It was a wonderful feeling entering the city but my excitement was limited because it felt very dangerous,” she said. “I was not the only woman who joined the Resistance. I am proud of what we all did as a team. But the proudest moment was probably going to Paris with General Charles de Gaulle.” 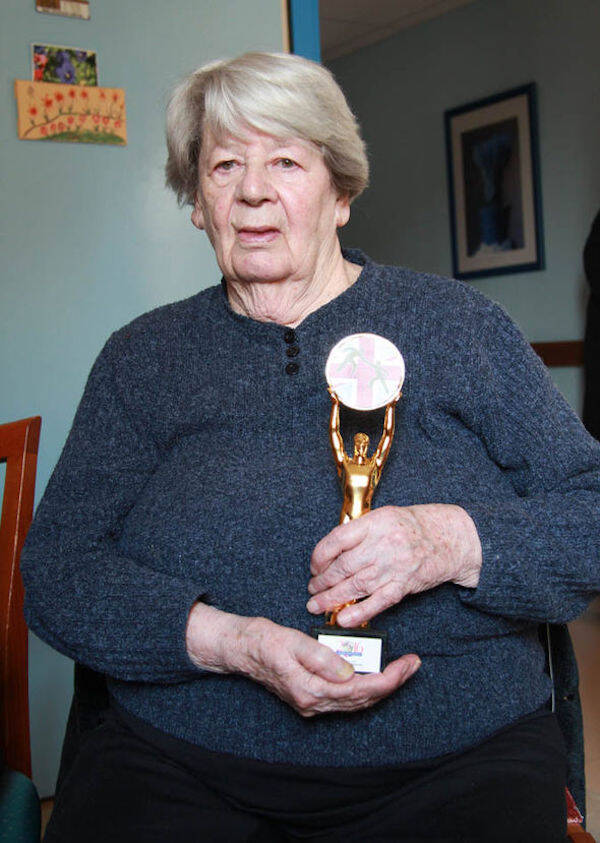 Simone Segouin is the first to state that she was no anomaly as plenty of female resistance fighters joined the effort to protect their country from tyranny. It is precisely this selflessness, however, and the courage she showed as one of these citizens that has turned her into a symbol of resistance around the globe.

It’s unlikely she’ll be forgotten again anytime soon, as a street in her newfound home of Courville-sur-Eure was named in her honor.

After learning about Simone Segouin, read about Witold Pilecki, the Polish resistance leader who voluntarily entered Auschwitz to expose its horrors to the world. Then, take a look at these disturbing photos of Jewish ghettos in the Holocaust.