The Bizarre History Of Sin Eaters, People Who Were Hired To Literally Consume The Misdeeds Of The Dead

For hundreds of years throughout the British Isles, mourning families hired sin eaters to "consume" their loved ones' unconfessed sins by eating a meal they had placed on the chest of the corpse.

Funerals in the 17th, 18th, and 19th centuries in Wales, England, and Scotland sometimes had an unusual guest. A destitute stranger, called a sin eater, came to mourn with the family. But he did more than that.

The sin eater was there to consume the sins of the deceased. Sometimes they did this by eating bread left on the corpse’s chest or face. Other times, they ate food that had merely been held over the dead body.

In all cases, sin eaters were paid next to nothing for their service. And despite “removing” sins from dead people — and taking them on themselves — they were universally reviled.

So who were these sin eaters, and what exactly were they tasked to do?

The Long And Macabre Tradition Of Sin Eaters

No one knows exactly where or how the concept of sin eaters began. It could be traced back to Jesus Christ’s sacrifice, to the Jewish tradition of manifesting sins on a goat, or even to nobles giving bread to the poor in exchange for prayers for a deceased loved one.

Regardless of its beginnings, the ritual of sin-eating started to spread as early as the 17th century. Then, sin eaters were frequently called upon to perform their strange service.

Following a death — often an unexpected one — sin eaters were summoned to the deceased’s home. There, their family handed the sin-eater a groat (equal to a few dollars today) and led them to the corpse. 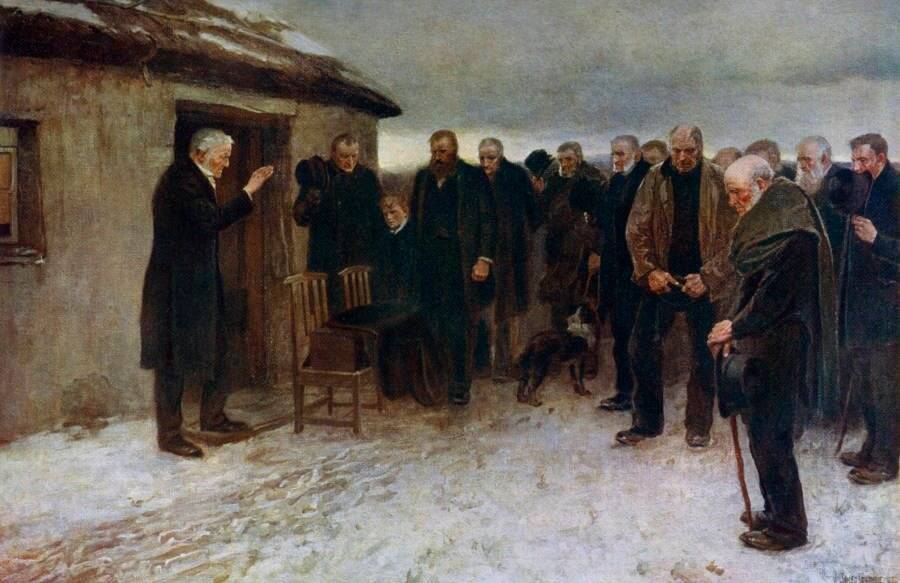 As the family watched, the sin eater would pick up food left on the dead person’s chest. The food, usually bread or a pastry, was believed to have absorbed the deceased’s unconfessed and lingering sins. While sitting on a stool and facing the door, the sin eater ate it, taking on the sins for himself.

“I give easement and rest now to thee, dear man,” the sin eater would say. “Come not down the lanes or in our meadows. And for thy peace, I pawn my own soul. Amen.”

Afterward, the person’s family often chased the sin eater from their home with sticks while shouting abuse.

So why did anyone become a sin eater in the first place?

Who Were Sin Eaters?

When travel writer Catherine Sinclair visited the Welsh county of Monmouthshire in the 19th century, she noted that sin eaters attended many local funerals. These men, she wrote in 1838, “who undertook so daring an imposture must all have been infidels, willing, apparently, like Esau, to sell their birthright for a mess of pottage.”

So, who were they? Most were poor, beggars, or alcoholics — people who’d do almost anything for a few dollars and a meal. In exchange, though, they became social outcasts.

“[The sin eater] was utterly detested in the neighborhood,” explained one man to the Cambrian Archaeological Association in 1852, “regarded as a mere pariah — as one irredeemably lost.” 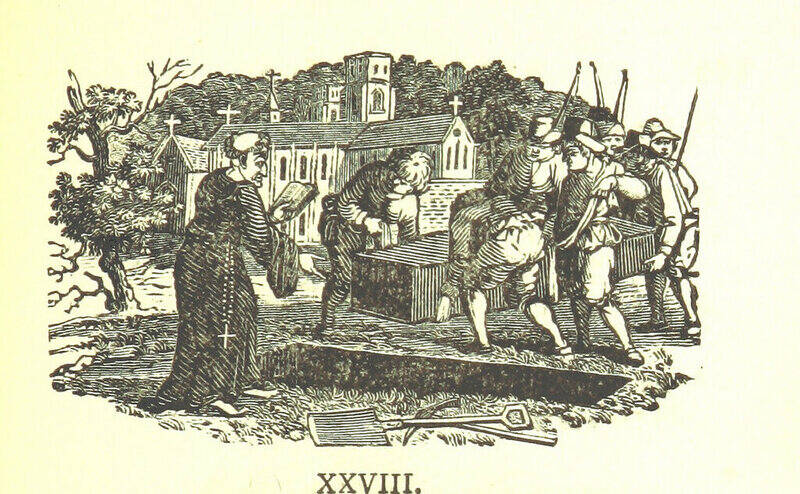 Impoverished, and carrying the weight of others’ sins, they were forced to live alone. Villagers even avoided looking them in the eye. Sin eaters also had to be careful, as their work was frowned upon by the church.

But not everyone fits this mold. The so-called “last” sin-eater, Richard Munslow, allegedly followed the tradition out of grief. A well-established farmer, he started sin-eating after three of his children died.

When Munslow himself passed in 1906, he took the tradition of sin-eating with him. Or did he?

Though the last sin eater died in 1906, the practice of sin-eating underlines something fascinating about human rituals. To this day, food remains an important part of mourning.

Some traditions bear a strong resemblance to sin-eating. In China, for example, a dead person’s lingering sins or wickedness are sometimes ritually transferred to food, which is then consumed by their family. And in the early 20th century, families in Bavaria allegedly put a “corpse cake” on the deceased, which was then devoured by the nearest relative.

In the end, sin-eating remains a fascinating, strange, and surprisingly deep tradition. It says a lot about how humans deal with death and the afterlife.

As such, it’s perhaps appropriate that the last sin eater, Richard Munslow, received some love and care one hundred years after his death. In 2010, locals in Ratlinghope worked together to restore his grave.

“This grave … is now in an excellent state of repair,” stated Reverend Norman Morris, the town’s vicar. He added: “But I have no desire to reinstate the ritual that went with it.”

After learning about sin eaters, learn about these interesting New Years’ traditions. Or, look through these strange cultural practices still carried out today.