The Brutal History Of The Spanish Donkey, The Medieval Torture Device That Left Victims With Mangled Genitalia

Also known as the wooden horse or the chevalet, variations of the Spanish donkey were used from the Middle Ages all the way up until the American Civil War in the 1860s. 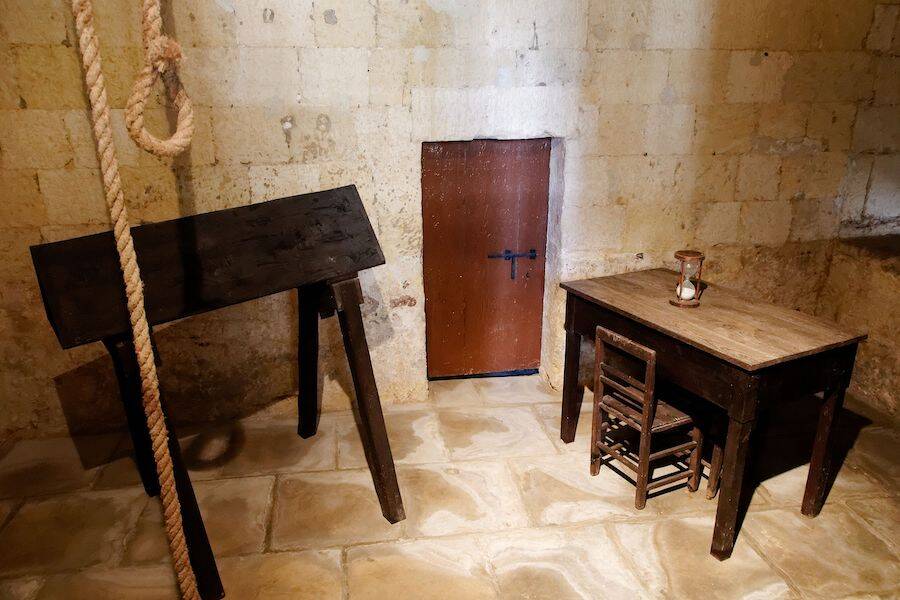 The Spanish donkey might sound like an overpriced cocktail, but the pain it delivered was far worse than a hangover. Otherwise known as the wooden horse or chevalet, it was a torture device utilized by Jesuits, Civil War soldiers, and even Paul Revere himself.

While there were numerous iterations of the implement, all known versions essentially operated in the same manner. According to History of Yesterday, the Spanish donkey was typically constructed out of wood. The earliest known model was built in the shape of a triangular prism on stilts, with victims forced to straddle the sharp corner of the wedge.

It’s unclear exactly who invented the torture device, but it was likely devised by the Spanish Inquisition and used to punish nonbelievers. Victims were stripped of their clothes and bound before being placed atop the wooden horse, and they were often tickled and had weights tied to their feet to exacerbate the agony. They remained on the device until they could no longer take the excruciating pain — or bled out.

Other medieval torture devices may have seemed more gruesome at first glance, but this unsuspecting wooden horse was right up there with the rack and the wheel — and it was ridden for centuries to come.

How Jesuits Brought The Spanish Donkey To The New World

While the Spanish donkey was invented in Europe, it soon made its way to the New World. One of the first recorded uses of the device was by Jesuits in modern-day Canada. According to The Jesuit Relations, which chronicled the Christian order’s missionary expeditions in French colonies across North America, several criminals endured this torture in February 1646.

“On the night of Shrove Tuesday to Ash Wednesday, some men… began to quarrel,” the record reads. “Jean le Blanc ran after the other, and came near beating him to death on the spot, with a club… Jean le Blanc was sentenced to make reparation, by the Civil authority, and to mount the Chevalet.”

“On the 15th, a Domestic of Monsieur Couillar’s, a public blasphemer, was put on the Chevalet,” details another account. “He acknowledged his fault, saying that he had well deserved punishment, and came of his own accord to confess, that evening or the next day.” 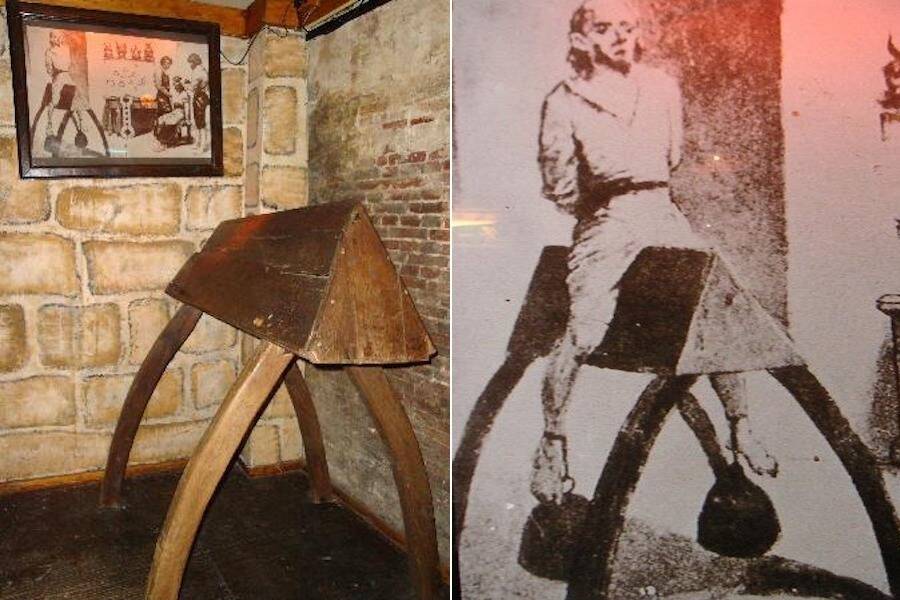 Left: TripAdvisor Commons; Right: Re-DefineA chevalet on display (left) and an illustration of its use (right).

Most grueling was a report from later that month describing a man who “acted at the fort as such a glutton, that he was put on the Chevalet, on which he was ruptured.” Indeed, many suffered for days atop the cruel device. The fortunate walked differently for weeks, while others were rendered infertile, left permanently disabled, or dropped dead from blood loss or exhaustion.

The Agonizing Use Of The Spanish Donkey Over The Centuries

Although the Spanish donkey aimed to inflict pain rather than cause death, many victims nevertheless lost their lives to the device. With a pointed piece of wood jammed between their legs, its victims’ genitals were almost always mangled. The perineum and scrotum commonly split open, particularly when victims were dragged from one end of the wooden horse to the other. Other unfortunate souls suffered shattered tailbones.

And though it was first used in medieval times, the Spanish donkey unfortunately didn’t remain in the distant past. According to Geoffrey Abbott’s Execution, the Spanish army relentlessly continued using the device until the 1800s. It was generally employed to discipline soldiers, and some victims purportedly even began to split in half as heavier and heavier weights were added to their ankles.

The British used the Spanish donkey as well, and they even added a carved horse’s head and tufted tail to the device, turning it into both a method of punishment and a form of entertainment for onlookers. Ultimately, however, the British abandoned the practice due to the glaring risk of death. Since the sustained injuries often led soldiers to become incapacitated and unfit for battle, the punishment was eventually discontinued, according to The History of Torture.

But with Jesuits bringing the device to the New World and an ever-growing population of British colonists and soldiers in America, it wasn’t long before the Spanish donkey appeared in the United States.

A version of the Spanish donkey torture method called “riding the rail” emerged during the American colonial period. Unfortunate offenders were forced to straddle a fence rail carried by two sturdy men who paraded them through town. This method added shame to the pain — and was often accompanied by the practice of tarring and feathering.

There was even a public chevalet that was 12 feet high in New York City. According to the book Torture and Democracy, in September 1776, none other than Paul Revere himself ordered two Continental soldiers to ride it when they were caught playing cards on the Sabbath. 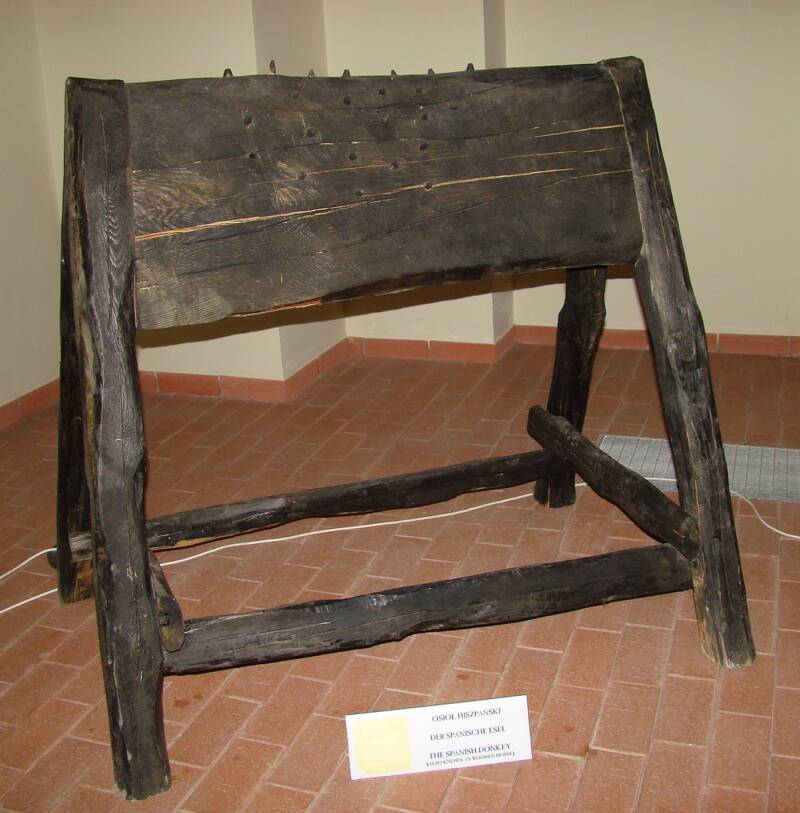 Wikimedia CommonsThe Spanish donkey was discontinued as a method of disciplining soldiers when it left them incapacitated for battle.

“This performance was carried on under the eyes of a guard with a loaded gun, and was kept up for several days; each ride lasting two hours each day unless the fellow fainted and fell off from pain and exhaustion. Very few were able to walk after this hellish Yankee torture but had to be supported to their barracks.”

While the Spanish donkey has fortunately become a relic of times past, it most certainly maimed and killed thousands over the centuries. It would be easy to applaud its discontinuance and bask in the progress humanity has made were it not for the evolution of torture — and its modern shadowy practice.

After learning about the Spanish donkey, discover how the brazen bull torture device roasted its victims alive. Then, read about the pear of anguish, the horrifying device that’s a proctologist’s worst nightmare.