The Harrowing Voyage Of The SS St. Louis, The Jewish Refugee Ship That No One Wanted On The Eve Of The Holocaust

In May 1939, 937 refugees — most of them Jewish — fled Nazi Germany seeking asylum in the United States, but they were denied and left adrift at sea for over a month. 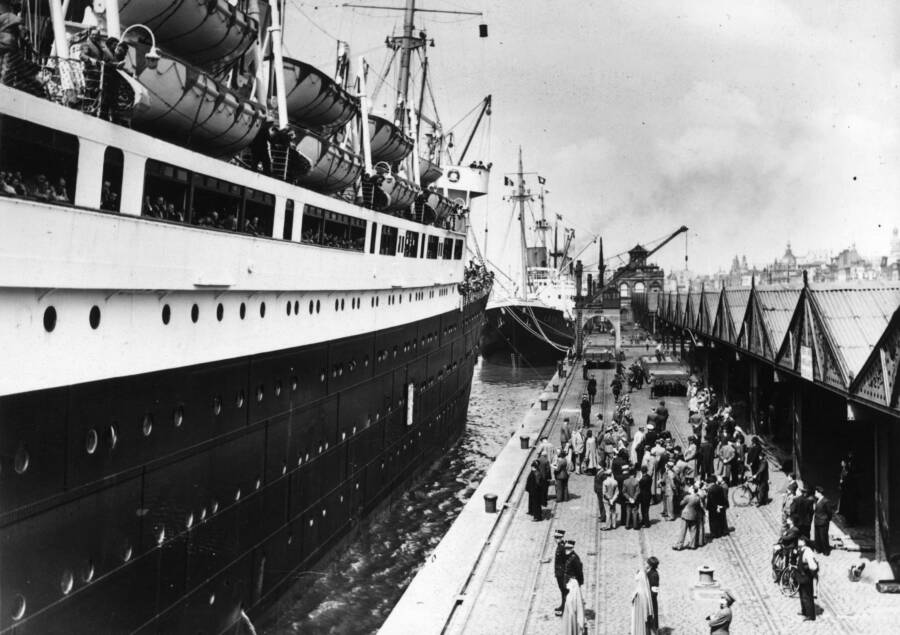 On May 13, 1939, 937 people — mostly Jews — boarded the luxury cruise liner, the SS St. Louis, fleeing persecution in Nazi Germany. The ship was bound first for Cuba, where the passengers would await immigration visas to enter the United States. But many of them never made it.

After being denied asylum in Havana, Cuba, the St. Louis attempted to enter the States anyway, but was turned away. With no other option, the ship of refugees was forced to return to Europe.

Fearing what would happen if they returned to Germany, the passengers pleaded with Great Britain, France, the Netherlands, and Belgium, for asylum. Though these nations eventually agreed to take the passengers, many of them were still unable to escape Europe with their lives during the Holocaust.

The SS St. Louis Embarks On A Heartbreaking Voyage

Over the course of two days in November 1938, nearly 100 German Jews lost their lives in an event that is widely believed to symbolize the start of the Holocaust.

Known as Kristallnacht, or “Night of Broken Glass” for the shattered windows and storefronts of Jewish synagogues, businesses, and homes, the evening of vandalism on behalf of Nazis convinced many German Jews that it was time to flee the country.

America was especially attractive to them because of its distance from the affairs of Europe at the time. 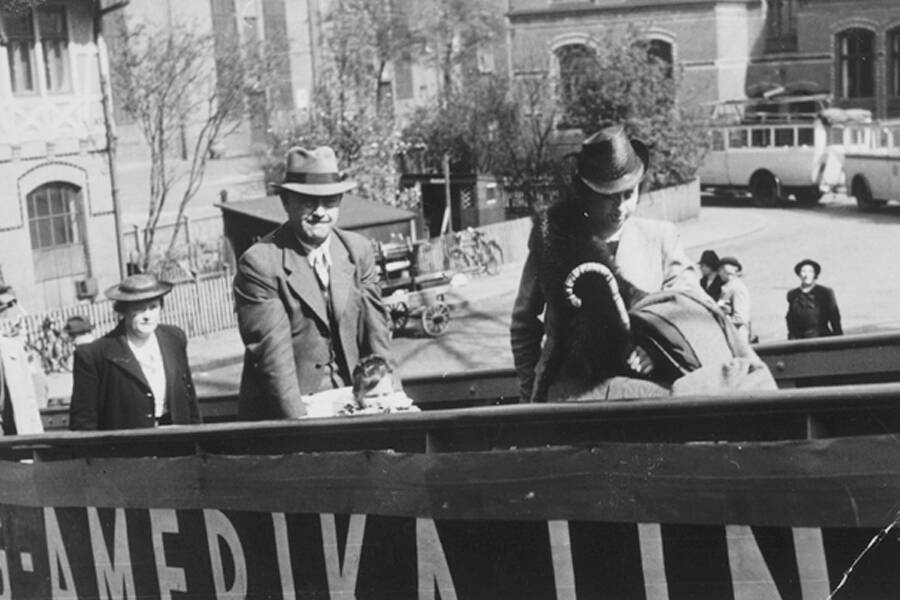 But as the United States Holocaust Memorial Museum noted, the waitlist for American immigration visas was agonizingly long, and the United States’ quota for German-Austrian immigrants — 27,370 — filled up quickly.

Fearing they would not be able to wait it out in Germany, over 900 people, most of them German Jews, decided to try to enter the country anyway.

They boarded the luxury cruise liner the SS St. Louis, captained by Gustav Schröder, who had helped arrange for the refugees to travel to Cuba where they could wait out their visa approvals there.

Unfortunately, the situation did not go according to plan.

An Unsuccessful Docking In Cuba

The St. Louis arrived at the dock in Havana, Cuba, on May 27, 1939, and immediately faced hostility from the people there.

Much like the rest of the world, Cuba had been devastated by the Great Depression. The country had already admitted around 2,500 other Jewish refugees — a decision which many Cuban citizens resented. To admit another 900, many argued, would be too much of a burden.

In fact, before the St. Louis had even set sail, right-wing Cuban newspapers had been calling on the government to cease admitting refugees. 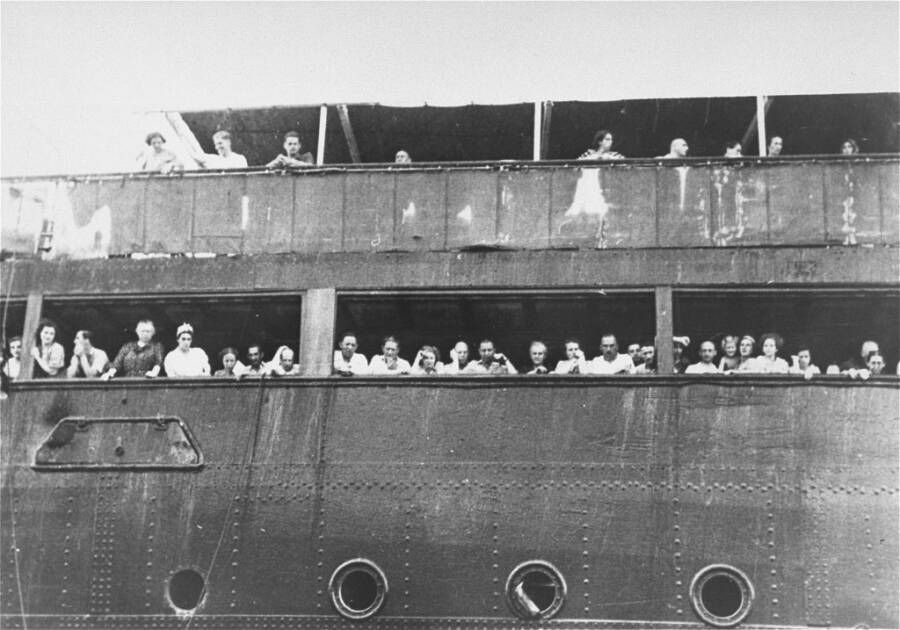 National Archives and Records Administration. College Park, Maryland.The refugees onboard the St. Louis awaiting news as to whether or not they would be able to land in Cuba.

Five days before the St. Louis had left Hamburg, a demonstration led by former Cuban President Grau San Martin took place, drawing 40,000 spectators and thousands more tuning in via radio to hear Grau’s calls to “fight the Jews until the last one is driven out.”

It was the largest antisemitic demonstration in history.

In-fighting in the Cuban government only furthered the issue, especially once it was discovered that the Director-General of the Cuban immigration office, Manual Benitez Gonzalez, had been selling illegal landing certificates to ships hoping to land in Cuba.

And just one week before the St. Louis arrived, Cuban President Federico Laredo Bru issued a decree that effectively invalidated any landing certificates, requiring anyone who hoped to enter Cuba to have written permission from the Cuban Secretaries of State and Labor and to post a $500 bond.

In the end, only 28 passengers were allowed into Cuba — 22 Jews with valid US visas, four Spanish citizens, and two Cubans. One other passenger was admitted as well, but only after they attempted suicide and needed to be rushed to the hospital in Havana.

The rest were sent away, hoping to find refuge in Miami.

The U.S. Ignores The Pleas From The SS St. Louis

Sailing close enough that they could see the lights of Miami, Schröder contacted U.S. officials asking for permission to dock in Florida. Some passengers even reached out directly to President Franklin D. Roosevelt, but their appeals went unanswered.

By now, the Jewish Joint Distribution Committee (JDC) had gotten involved and was attempting negotiations, but public opinion in the United States still favored strict immigration, and granting the St. Louis admission would also mean denying admission to hundreds of others who were on the waiting list. 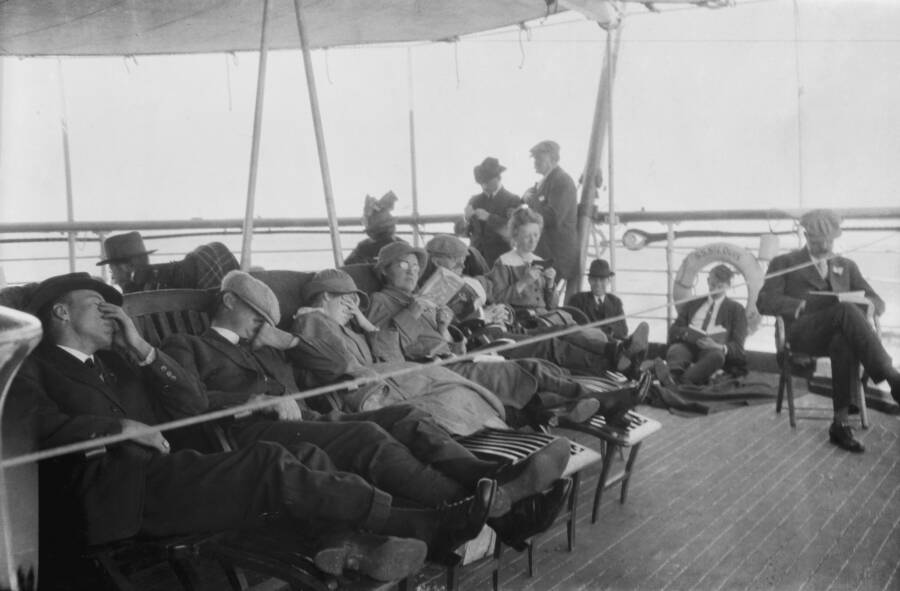 Montifraulo Collection/Getty ImagesPassengers were reportedly treated with kindness by the staff aboard the St. Louis.

Eventually, a telegram arrived from the U.S. State Department, saying that the passengers must “await their turns on the waiting list and qualify for and obtain immigration visas before they may be admissible into the United States.”

As reported by the BBC, conditions on the ship weren’t abysmal. Schröder had directed his crew to treat the passengers politely, wanting to provide them a better experience than they’d known in Germany. There was a dance band onboard and a cinema, with regular meals and a good variety of food.

The captain allowed Jewish passengers to hold traditional Friday night prayers, giving permission for the portrait of Hitler hanging in the dining room to be taken down during this time. Desperate to save his passengers, Schröder considered running aground in Florida anyway, but official U.S. ships followed them around the coast.

With nowhere left to go, the St. Louis set course to return to Europe.

How The Passengers Finally Found Refuge

With the JDC now fully involved, as their archives stated, negotiations began with other European countries to find refuge for the St. Louis. Going back to Germany was not an option.

The JDC posted a cash guarantee of $500,000 ($500 per refugee) to make the arrangement feasible and to cover upkeep costs so that when the ship once again reached Europe in June 1939, it was able to dock in Antwerp, Belgium, and the passengers could disembark. 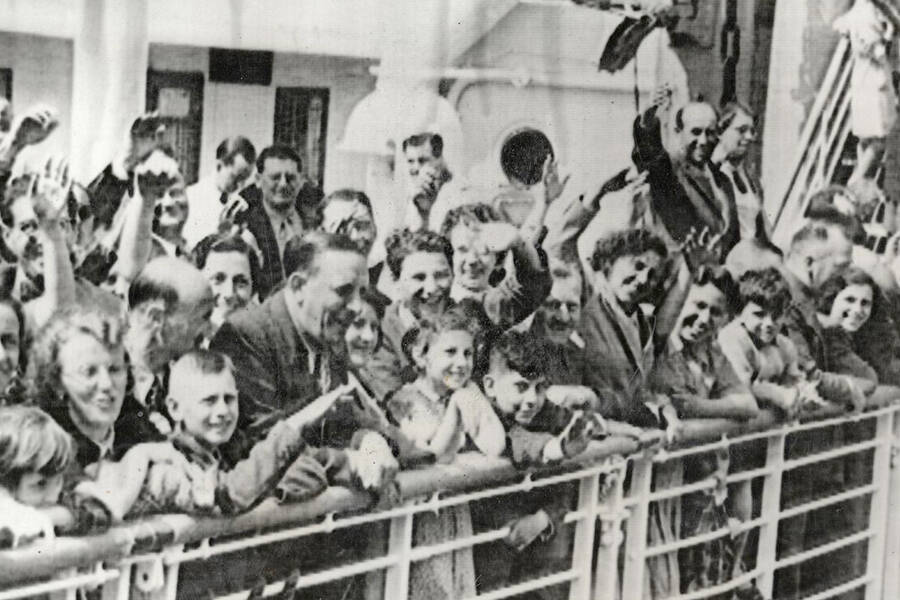 JDC ArchivesThe remaining passengers upon arriving in Belgium after being denied admission to the United States.

In the end, Great Britain took 288 refugees; the Netherlands took 181; Belgium took 214; and France took 224. Eighty-seven of the refugees managed to successfully move to America before Germany invaded western Europe in May 1940.

However, 532 passengers were trapped in the German conquest. Of them, only 278 survived the Holocaust. The other 254, unfortunately, were killed by the Nazis.

After learning about the long and harrowing journey of the SS St. Louis, read about these Holocaust heroes. Then, take a look at these photos that show the true horrors of the Jewish ghettos of the Holocaust.