Inside The Confederacy’s Half-Assed Plan To Invade The U.S. From Canada

The Confederates hoped that by invading Vermont, they would draw Union soldiers away from the main battlefields. 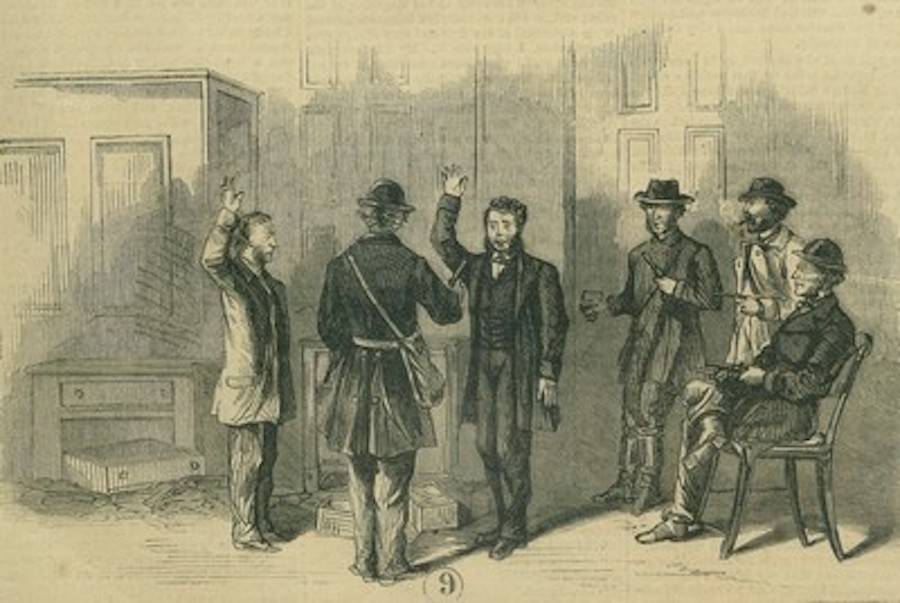 Wikimedia CommonsBank workers being forced to swear an oath of allegiance to the Confederacy.

By 1864, things looked bad for the Confederate States of America. The tide of the Civil War was rapidly turning against them as the Union marched south, and the Confederacy simply didn’t have the resources to fight the war on traditional terms. Clearly, they’d have to think outside the box if they wanted to have any chance of winning.

Obviously, the Confederacy shared a long land border with the United States. The length of the border made it easy for small groups of Confederate troops to sneak through Union lines and launch raids deep inside enemy territory. One of the most famous of these raids was led by a Confederate officer named John Hunt Morgan. Morgan’s raid ventured as far as Ohio before being smashed by a Union force. Though they ultimately failed, many of the raiders managed to escape into neutral Canada, including a young soldier named Bennett Young.

Young had an idea. He was going to launch a raid deep inside U.S. territory.

Young wanted to lead a force of Confederates in an attack on Vermont. When he proposed the raid to Confederate leaders, he pointed out that it would have two advantages: it would force the Union to divert troops to protect their border with Canada; and it would give the Confederacy a chance to steal some much-needed cash.

The Confederate leadership loved the idea so much that they immediately promoted Young to Lieutenant and sent him north to return to Canada and begin recruiting other escaped Confederate raiders. On October 10, 1864, Young and two accomplices checked into a hotel in the small Vermont town of St. Albans, just a few miles from the Canadian border. Over a few days, more raiders trickled in until Young had 21 men in St. Albans. At around 3:00 PM on October, 19, a group of raiders simultaneously walked into three local banks, identified themselves as Confederate soldiers, and demanded all the money they had.

Altogether, the raiders made off with about $200,000 ($3 million in today’s dollars).  Meanwhile, some of the other Confederate troops assembled the rest of the civilians in the middle of the town at gunpoint and confiscated their horses. A small gunfight broke out as some of the citizens tried to resist, leaving one man dead. But otherwise, the raid was going as well as anyone could have hoped. Obviously, no one was expecting Confederate raiders to suddenly attack a small town in Vermont.

But soon the raiders ran into difficulties. The next part of the plan was to set fire to the town, spreading fear throughout the region and getting the Union to move troops to the border.  However, the flammable liquid they brought for the job was faulty and the raiders only succeeded in burning down a small shed. 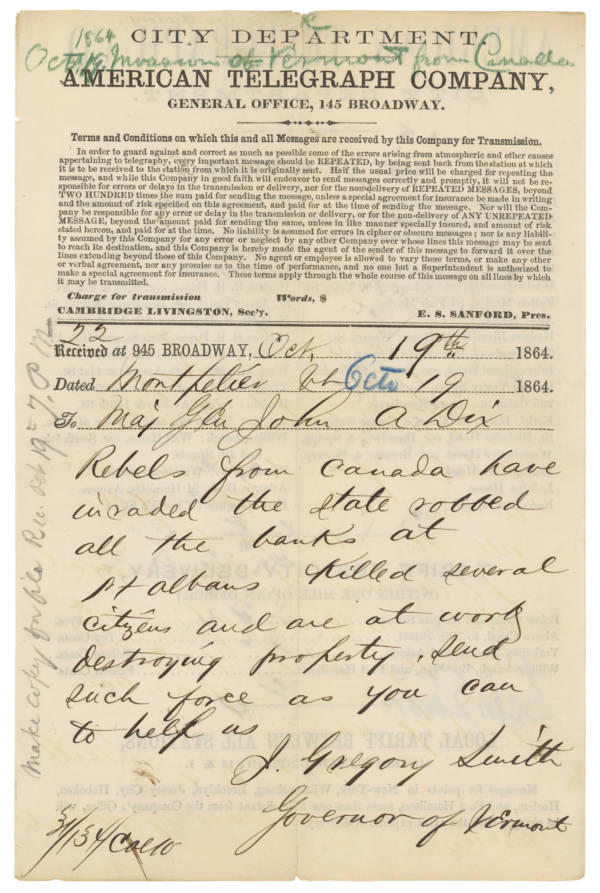 National Archives and Record AdministrationA telegram from the Governor of Vermont warning the Army of the raid.

With their mission accomplished (more or less) Young led his men back into Canada, where they were all promptly arrested by Canadian authorities. The U.S. government immediately began pressing the Canadians to extradite the raiders to stand trial for what they argued was really just a simple bank robbery. But wanting to stay neutral, the Canadian government agreed with Young that he was acting under official military orders and sent him back to the Confederacy. However, they did hand back the cash they recovered to the city of St. Albans.

Ultimately, the raid was an embarrassing failure, and the Confederacy decided against any further attempts to attack the Union through its northern neighbor.