Staten Island has never been the biggest fan of New York City — and in some ways, rightfully so. 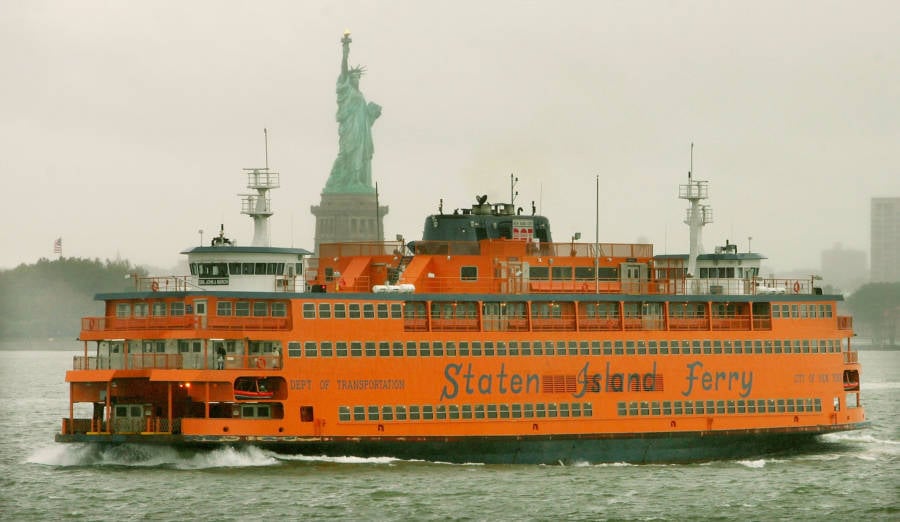 Across the globe, the idea of secession has caught traction. We’ve seen it in various forms, be it Scotland’s referendum, Brexit, or most recently with “Calexit,” the Californian attempt to break off from the United States.

While all of these have received media attention, Staten Island’s attempts at secession are less popularly known. And, given their status as New York City’s garbage dump, they have some pretty good reason to be fed up.

It started in earnest in 1993. Fed up with high taxes, poor public transit and astronomical amounts of city garbage deposited in their dump, Staten Islanders voted to secede from New York City.

In spite of the overwhelming support, it didn’t happen. Instead, the New York State Assembly simply ignored the referendum results. Someone made something out of the attempt, though. Rudy Giuliani, then a former U.S. attorney, addressed Staten Island’s grievances in his campaign to win that year’s New York City mayorship.

And he succeeded: By appeasing the Islanders on their two biggest concerns — closing Earth’s largest landfill and eliminating the toll for the ferry between Staten Island and Manhattan — Giuliani got their votes, bringing his political career to new heights for the cost of effectively shutting down the secession movement.

It was probably for the best he squashed the desire to secede. After all, secession is complicated. It is essentially a divorce, and a lot of lawyers would have put in millions of billable hours to sort out minutiae such as Staten Island’s share of NYPD vehicles.

The secessionist fervor didn’t stop forever. Indeed, when Bill de Blasio became Mayor in January 2014, the conversation came back. But as outlandish as it sounds, once you learn about the borough’s sordid history with Manhattan, the desire becomes understandable. 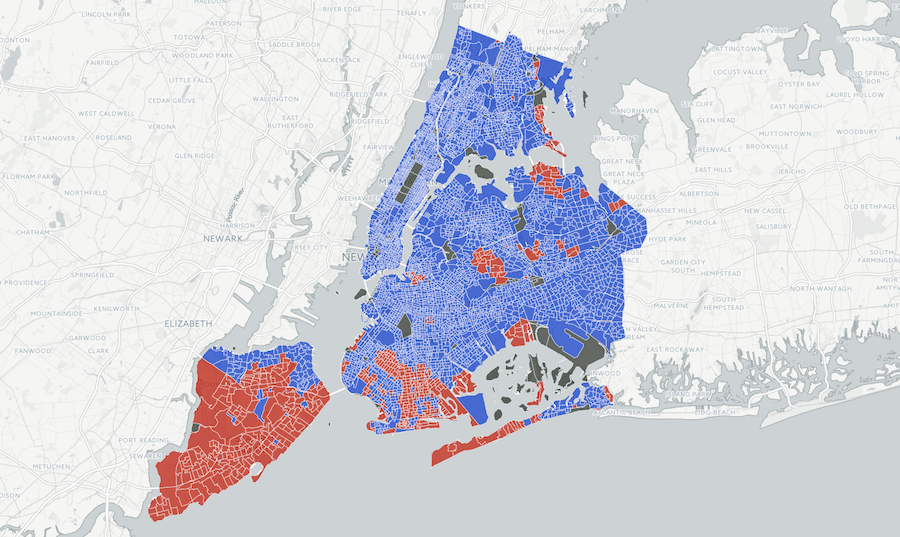 DNAInfoThe results of the 2016 presidential election in all of New York City’s election districts.

America knows Staten Island for two reasons: For being the Planet of the Guidos that spawned three Jersey Shore cast members, and for being the place where mobsters historically hung their hats.

North Shore is the northernmost spot on the island and a perennially about-to-bloom hotspot with Manhattan views. It has little in common with the Italian-American bubble around South Shore, which is as far away as you can get from the city while still being in New York City.

See the difference yourself by checking out the neighborhood-by-neighborhood results of the 2016 presidential election.

Despite the divide, North Shore and South Shore came together in the early 1990s. It was the two issues: Getting fleeced on ferry fares, and the 2,200-acre blight that was the Fresh Kills Landfill, the largest in the U.S. Unified, they made a move for secession.

“I feel like it’s the old story where you don’t like anyone from the other side of town until you meet someone from another town. At the end of the day, we identify as Staten Islanders. There was a lot of support for secession in 1993.”

But the New York City government didn’t want to hear it, mostly because of the landfill.

When New York City opened the Fresh Kills Landfill on Staten Island in 1947, the city government originally intended it to be a temporary measure. Instead, it grew into a literal mountain of trash over the ensuing decades and turned Staten Island into New York City’s dumping ground.

City sanitation workers layered garbage on top of ash on top of trash for years. By the time the secession movement came into its own, City Hall had allowed the waste to reach heights of 25 to 40 feet above sea level. The squalid conditions also introduced a new problem — feral dogs who would not hesitate to chase and attack workers.

In the words of Samuel Kearing, the former city sanitation commissioner in the early 1970s, when he saw Fresh Kills for the first time:

“It had a certain nightmare quality… I can still recall looking down on the operation from a control tower and thinking that Fresh Kills, like Jamaica Bay, had for thousands of years been a magnificent, teeming, literally life-enhancing tidal marsh. And in just twenty-five years, it was gone, buried under millions of tons of New York City’s refuse.”

At peak operating capacity, 20 barges would each drop 650 tons of New York City garbage — roughly 85 percent of the weight of the entire Brooklyn Bridge — every single day. The mountain was growing so quickly that if Giuliani hadn’t fulfilled his campaign promise and closed it in 2001, the landfill would have soon become the highest point on the East Coast.

When it did close, it was already 85 feet taller than the Statue of Liberty. Volume wise, it was the largest human-made structure in the world.

Understandably, Staten Islanders disliked the landfill. But their problems with the New York City government ran far deeper than that.

Why The Secessionists May Rise Again 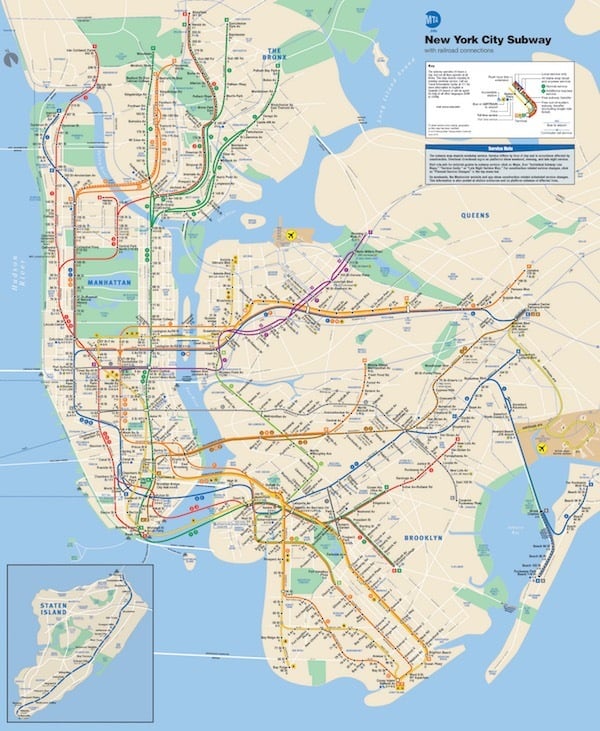 Despite the distorted perspective New York City’s iconic subway map, featured above, presents, Staten Island is three times larger than Manhattan. The city’s forgotten backyard for centuries, Staten Island looks small on the map because no one pays any mind to it.

Consider the graph below, which shows the number of times novelists have mentioned New York City, Manhattan, Brooklyn, Queens, the Bronx or Staten Island in fictional literature since the 1800s. As you can see, culture has never paid any mind to Staten Island.

Staten Island never seemed to care much about being the black sheep. The island just wanted two things from New York City: Waterfront investment — it was a big industry back in the day — and interborough bridges.

Islanders got neither, but at least they had a voice in City Hall. When the five boroughs consolidated in 1898, Staten Island struck a deal: the island had the same voting power as the other four boroughs.

The borough president would represent this voice on the New York City Board of Estimate, a legislative body consisting of the mayor, comptroller, and council president, each of whom had two votes, and the five borough presidents, who each had one vote.

By ending the Board of Estimate, the ruling left Staten Island with only proportional representation on the City Council. Considering how small of a population they are, from where Staten Islanders’ stood, they had lost their seat at the table.

As Council Member Borelli explains it, “You could make an argument that [Staten Island] has benefited over the years, and we have, from being part of the city. [But] the reason behind why Staten Island consolidated never panned out.”

Borelli went on to emphasize that the promised city waterfront development and interborough infrastructure investment, from when the boroughs first consolidated, never materialized. Furthermore, the destruction of the Board of Estimate left the island with a voting power only equal to its population. As a mere seven percent of the city’s population, this translates into just three of the 51 seats on the New York City Council.

But while all this explains why Staten Islanders voted overwhelmingly to secede in 1993, the powers that be wouldn’t allow it.

When the New York State Assembly reviewed the State Constitution, they decided that the “home rule” principle meant the Assembly couldn’t vote on the issue without the consent of the New York City government. This was not going to happen, and it kept Staten Island effectively bound to New York City.

In other words, because of the home rule principle, the vote would never go forward without mayoral support. And the mayor wasn’t going to let the city’s prime trash dump go without a fight.

State Assembly Speaker Sheldon Silver, a Manhattan resident, would later say he blocked the vote because he didn’t want to be the guy who broke up New York City. This was a time when the Soviet Union was breaking up.

Today, many in Staten Island hope that such a measure can finally win approval. Borelli, for one, is a self-declared proponent of localized politics and supports Staten Island putting another referendum to secede on the ballot.

While Borelli admits the New York City Council has an unofficial policy that council members set the policy decisions for their own districts, he believes Staten Islanders know what their home needs better than City Hall does:

“[Two-thirds] of the island voted to leave. People are better served by electing their own town board to figure out how best to run the sewer line through town… Just because there’s an agency with a three letter acronym doesn’t mean they’re smart, efficient, or better at performing the fundamental functions as a local municipality. The state doesn’t know anything — they are not experts because they’re there, just because they’re a bigger agency.

For reference, each New York City council member has arguably more executive influence and represents more people than the mayor of Fort Lauderdale, Florida. If Staten Island ever does successfully secede, it would instantly become one of the 40 largest cities in the U.S.

Compared to other cities of the same size, Staten Island would be the safest large city in America as well. Of course, that statistic comes from a time when the island has little to no control over its local government.

Next, see what else was happening in New York around the time that Staten Island almost seceded, during the city’s tumultuous 1990s. Then, have a look at some other difficult times in New York City’s history during the 1970s, 1980s.