12 Of The Strangest Things Ever Spotted From The Skies, Explained By Science

Caught by plane, satellite, or even Google Earth, these strange aerial photos show some of the most bizarre things ever discovered on planet Earth.

Whether by satellite, plane, or even idly zooming around the planet via computer screen with Google Earth, it turns out there are still plenty of bizarre things to be discovered right here on our home planet.

From immense holes appearing in the ground to bizarre blood-red waterfalls spewing forth from the snow, these strange aerial photos show 12 of the most bizarre things lurking on the surface of the Earth, while we explain how they came to be there: 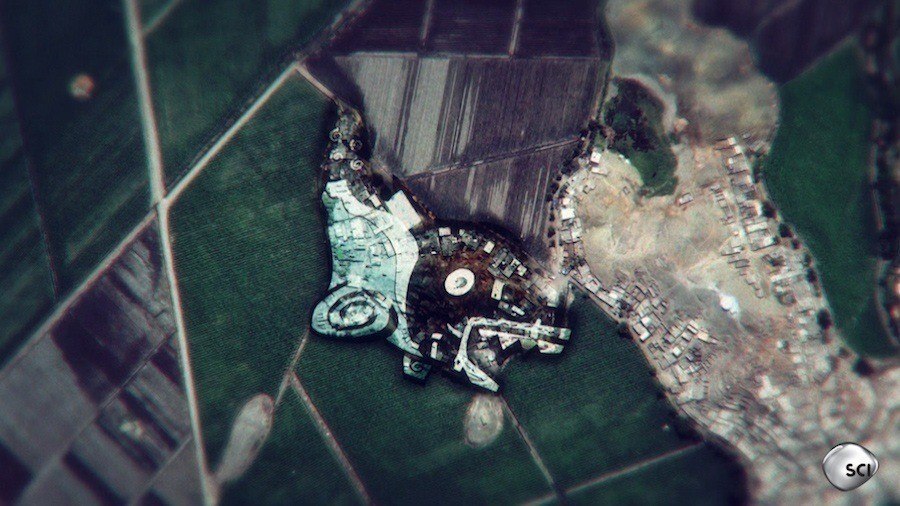 First spotted on Google Earth in 2012, this is one of several large, animal-shaped mounds discovered near Lima, Peru, that experts think could date back as far as 5,000 years ago. Killer whales hunted just off the coast of the country — less than half a mile away — until very recently, when industrial fishing deprived them of their prey.

An Enormous Hole In The Ice 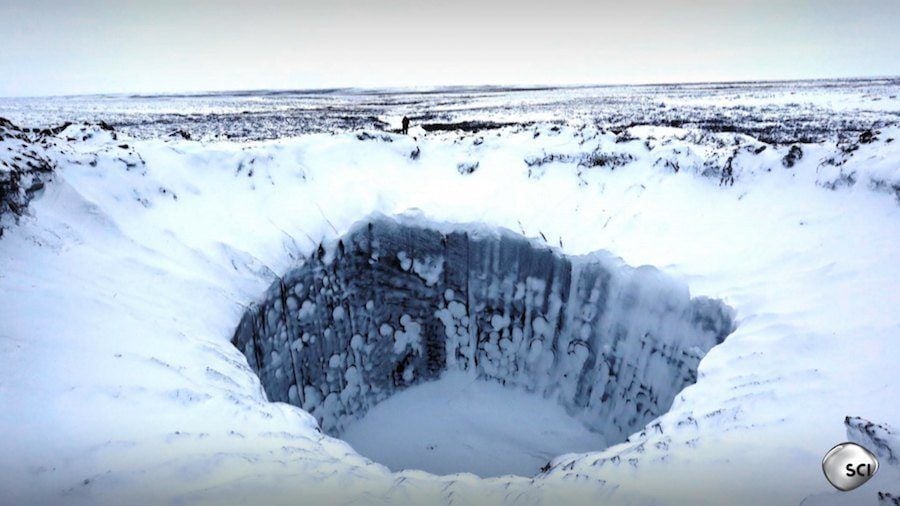 Located in Siberia, this hole is likely the result of a melted “pingo” — large ice plugs that form near the surface and have a small hill form on top. When one of these melts rapidly, it can cause areas of the ground to collapse. Unique to such polar regions, pingos only melt fast enough to form craters like this when temperatures are unseasonably warm.

A Mysterious Distress Signal Carved Into The Jungle 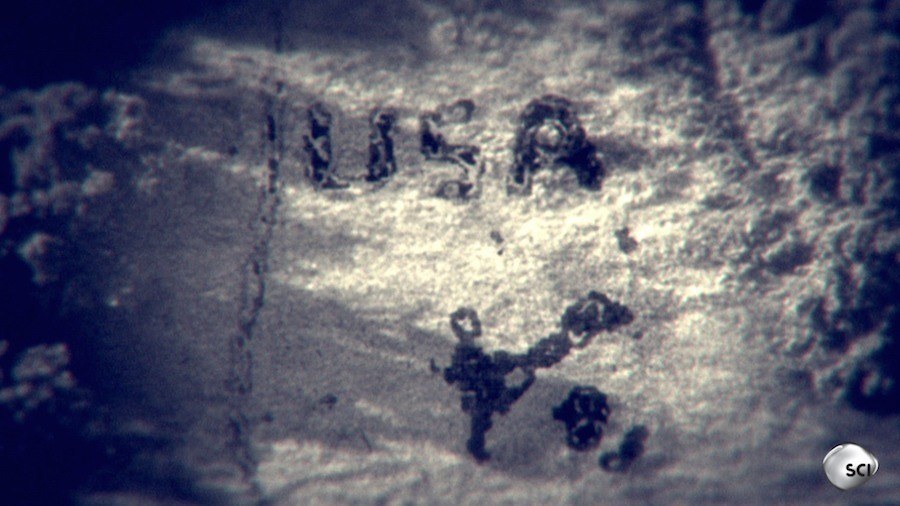 Spotted in the jungles of Vietnam, this message measured an astonishing 37 feet high. But what does it mean? In all likelihood, it was meant as a distress signal from a stranded pilot — the “Walking K” signal underneath the “USA” section was known to be used by downed aviators. Since the message was not discovered until 15 years after the war ended, however, the fate of the pilot remains unknown.

A Huge Hole In The Ground 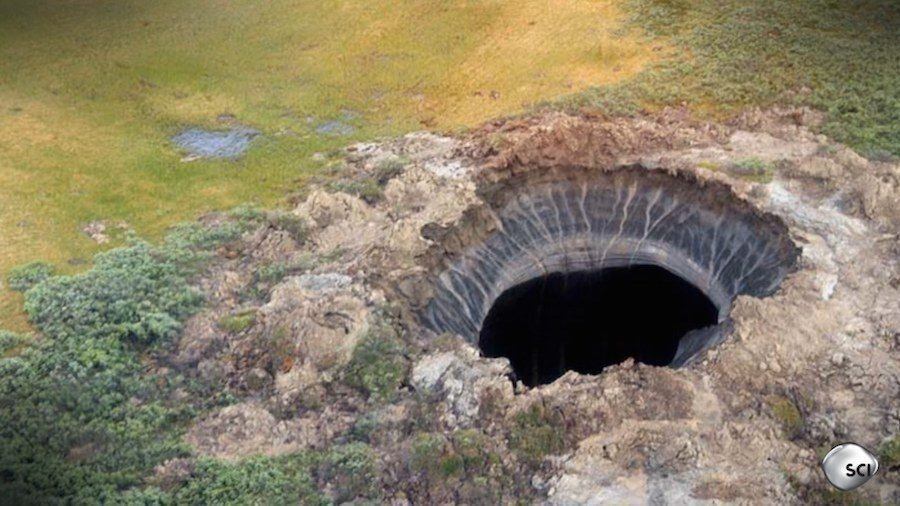 Discovered on Russia’s Yamal Peninsula in 2014, this is just one of at least seven enormous holes discovered in the Artic region. Some scientists have speculated that the holes were caused by the explosion of trapped pockets of methane. A slightly less dramatic theory is that it is another example of a pingo, and the evidence of ejected rocks around the site can be explained by pockets of natural gas forcing the boulders out of the ground once the pingo melted and released them. 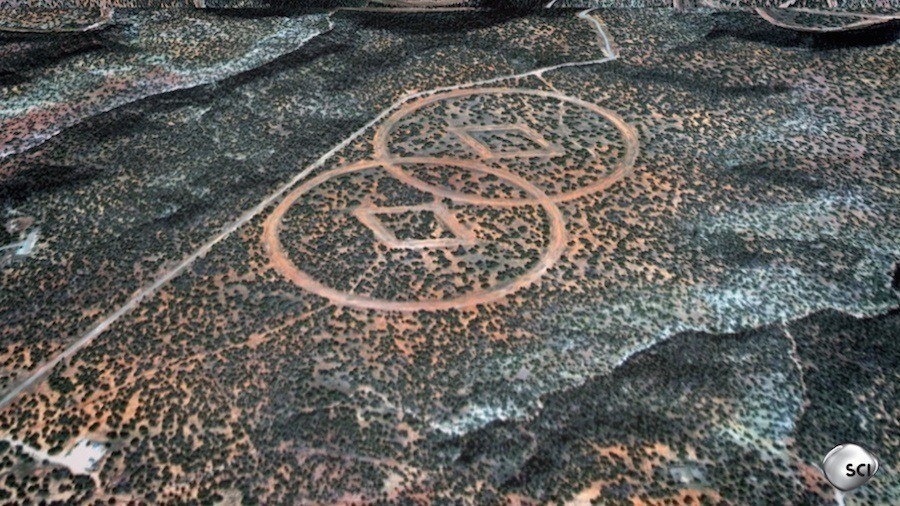 These huge designs were seen carved into the land of Trementina Base, New Mexico, the location of the Scientology-affiliated Church of Spiritual Technology (the symbol is the Church’s logo). A former member claims that they serve as signposts for reincarnated Scientologists returning from space. Others believe they mark the site of an underground bomb shelter, designed to keep precious elements of the church (such as the writings of L. Ron Hubbard) safe from a nuclear war. 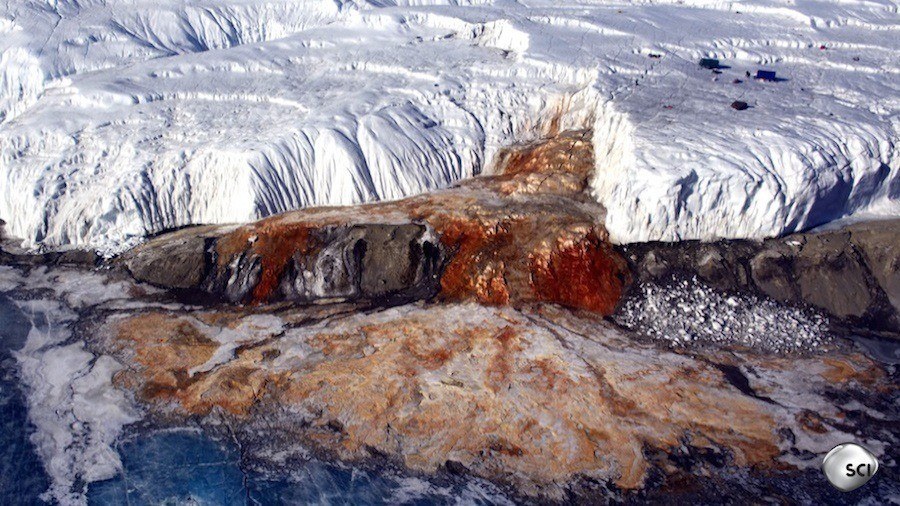 Known as the Blood Falls, this weird discoloration stands out for miles against the rest of Antarctica’s snowy whiteness. The red coloring is believed to come from an underground reservoir rich in iron, which is the same element that gives blood its red coloring. 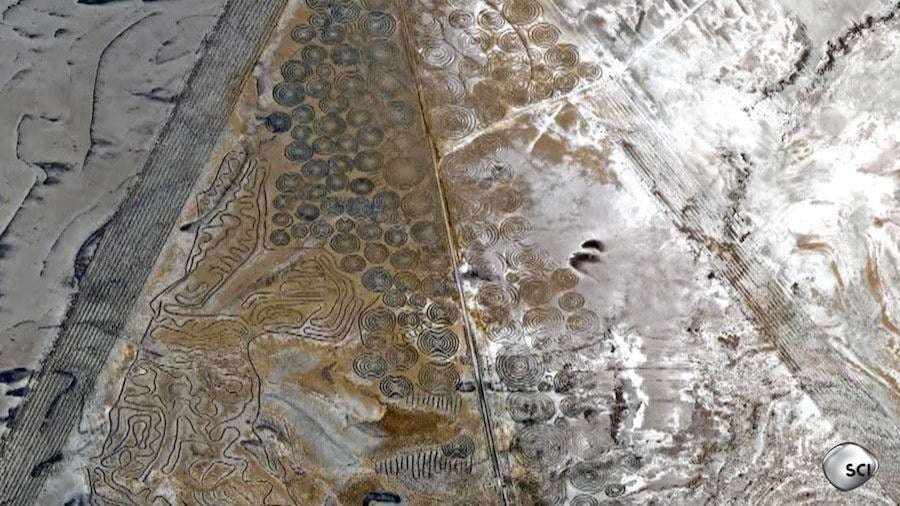 These remarkable designs carved into the ground of South Africa were believed to be markers, with the spirals forming a map to the ancient lost city of Kalahari. Sadly, the truth is much more straightforward: They were created by local farmers, attempting to trap enough water to irrigate their crops during the dry months.

The Field Of Jesus 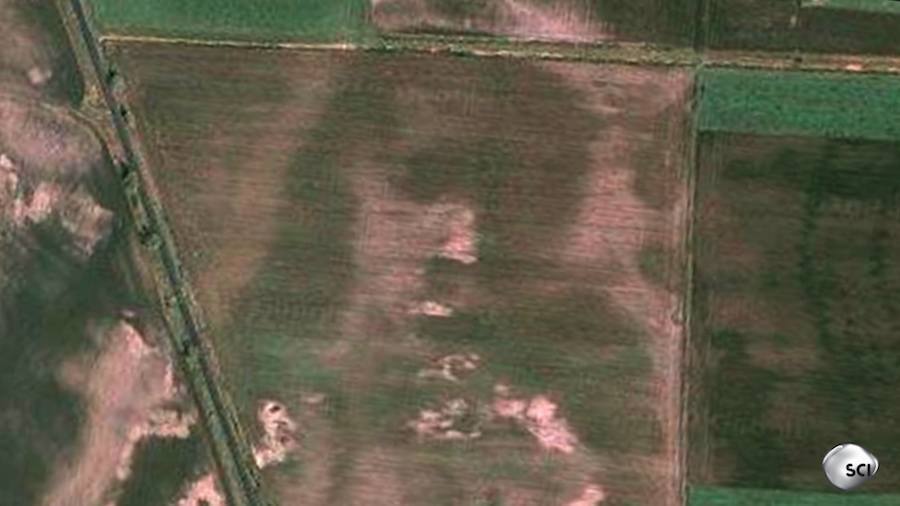 Discovered by British man Zach Evans while using Google Earth, this entire field appears to display the face of Jesus — or at least, its traditional representations. Located on farmland near Püspökladány, Hungary, its origins are still a mystery, but it is likely just a simple topographical coincidence. 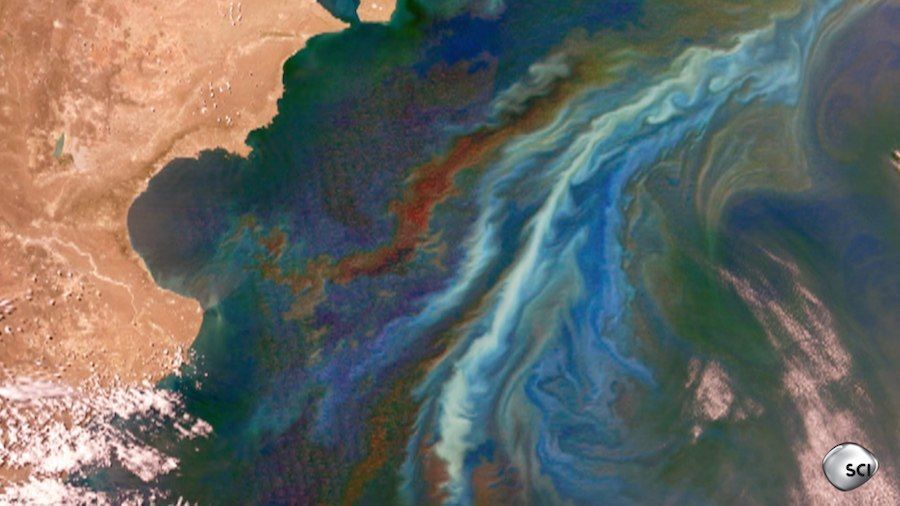 This algal bloom is large enough to be seen from space. Known as a Red Tide — for obvious reasons — the red or brown color comes from a specific type of phytoplankton known as dinoflagellates. Red Tides are normally associated with toxin production or oxygen depletion in the water, and as a result, they have a devastating effect on nearby aquatic and coastal life.

A Scar In The Desert 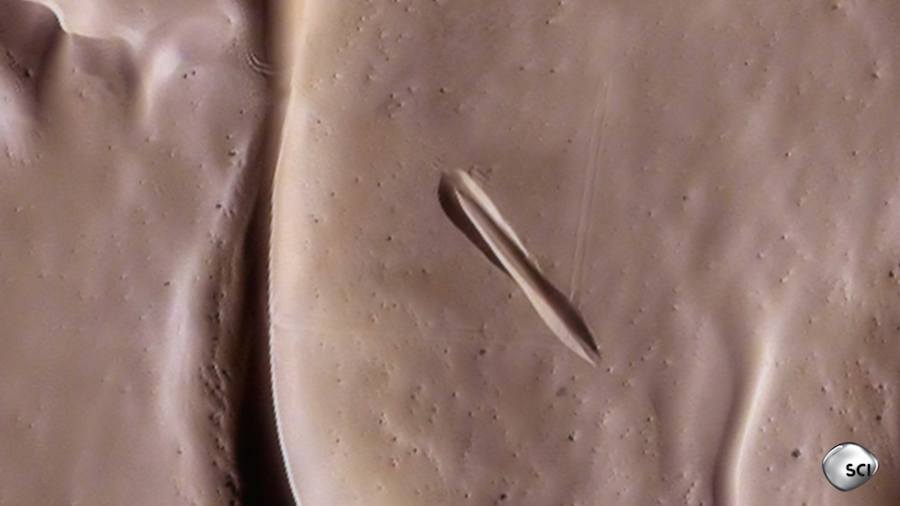 This long, strange groove carved into the Sahara Desert was first spotted by a satellite in January 2005. Analysts had various theories about the clearly man-made mark, ranging from a plane crash to possible nuclear bomb testing. In 2011, however, the cause was revealed to be much more mundane, being merely the result of a buried oil or gas pipeline. 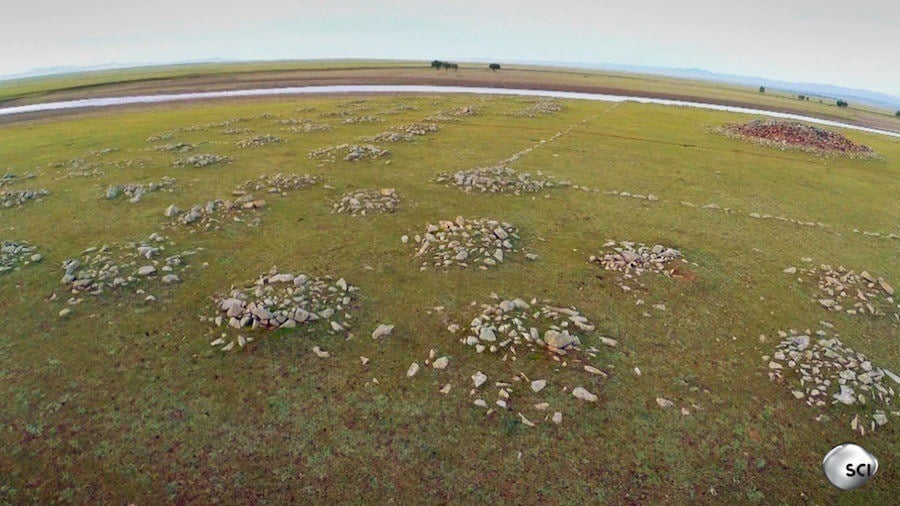 Too uniform to be a natural occurrence, these piles of rocks located in Eastern Mongolia are thought to be either a burial ground or sacrificial site. Archeologists believe that the very large pile seen towards the right indicates that a person of immense importance was buried there — possibly even Genghis Khan himself. 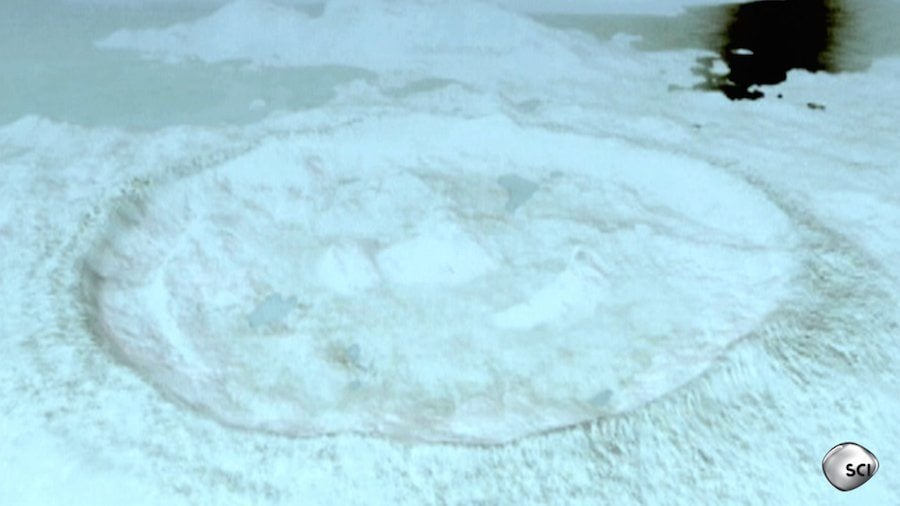 With a diameter of nearly three quarters of a mile and a depth of 560 feet, the Barrington Crater in Arizona is a startling reminder that very large meteorite impacts can (and do) happen. The crater is thought to have been formed around 50,000 years ago, during the Pleistocene epoch — long after the extinction of the dinosaurs, but early enough for nearby woolly mammoths and giant ground sloths to have had a very bad day indeed.