The Forgotten Explosion Of The Sultana, The Worst Maritime Disaster In American History

The 'Sultana' was carrying some 2,000 freed Union soldiers from Confederate prisons when three of its four boilers blew, sending the ship into flame and chaos.

On April 27, 1865, the United States experiences its worst maritime disaster in history. Mere weeks after the Civil War came to an end, the steamboat, Sultana exploded and sank in the Mississippi River, killing an estimated 1,200 to 1,800 Union soldiers who were released from prison and on their way home.

The sinking of the Sultana claimed more victims than the Titanic, yet the tragedy remains largely forgotten in American history. But behind the devastation lurked conspiracy, foul-play, and negligence, that perhaps suggest the disaster could have been avoided.

Corruption Aboard The Sultana 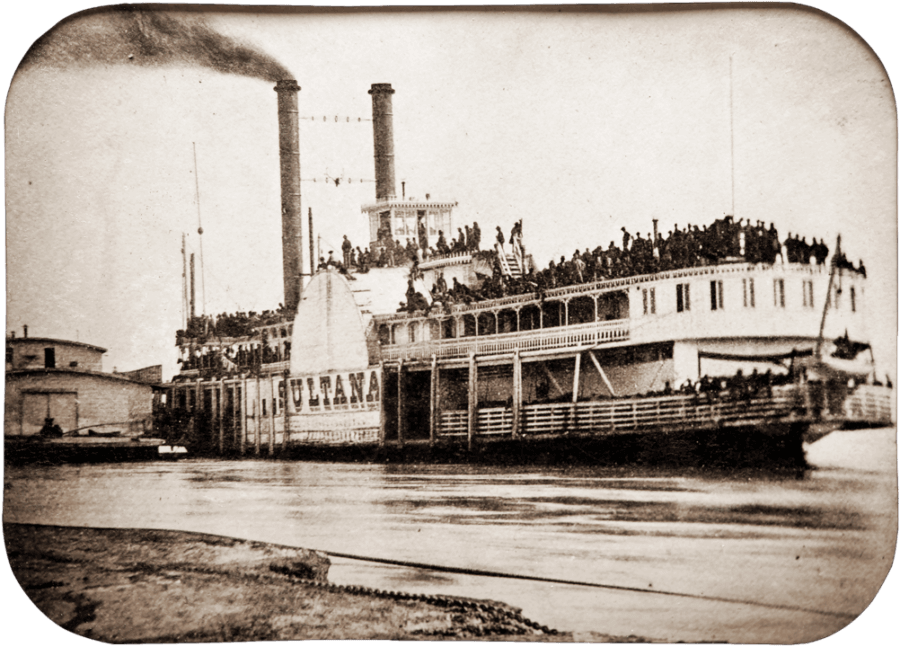 Wikimedia CommonsThe Sultana, photographed a day before it sunk to the bottom of the Mississippi River. Notice how overcrowded the decks are.

Following the end of the Civil War in 1865, both Confederates and Unionists scrambled to pick up the pieces left over by the bloody conflict. This included the release of war prisoners from both sides. Thousands of newly paroled Union soldiers who had been held in the Confederate prison camps of Cahaba near Selma, Alabama, and Andersonville, in southwest Georgia, had all been brought to a smaller camp outside of Vicksburg, Mississippi. They needed passage north.

Meanwhile, Captain James Cass Mason of St. Louis was in command of a paddle-wheeler called Sultana headed for Missouri. The small wooden steamboat typically carried a crew of 85 and was intended for cotton transport before it was commissioned to transport troops instead.

During a stop in Vicksburg to address a boiler issue, the steamboat skipper received word that the U.S. government was willing to pay a princely fee — $5 for each released soldier and $10 for each officer — for the transport of former Union prisoners back North.

Captain Mason, lured by the promise of a handsome payday, seized the opportunity and accepted a bribe from an officer to transport as many paroled Union prisoners as he could fit onto the Sultana. In his haste, Captain Mason chose not to repair the ship’s boiler as extensively as it required and chose instead to settle with a quick, temporary fix.

The captain worried had he waited to fix the boiler as it required, the Union soldiers would find alternative passage northbound.

According to Jerry Potter, a lawyer-turned-author who wrote The Sultana Tragedy: America’s Greatest Maritime Disaster, the captain loaded on more men than the boat was meant to carry.

“The boat had a legal carrying capacity of 376 passengers,” Potter explained. “On its up-river trip, it had over 2,500 aboard.”

The Sinking Of The Sultana 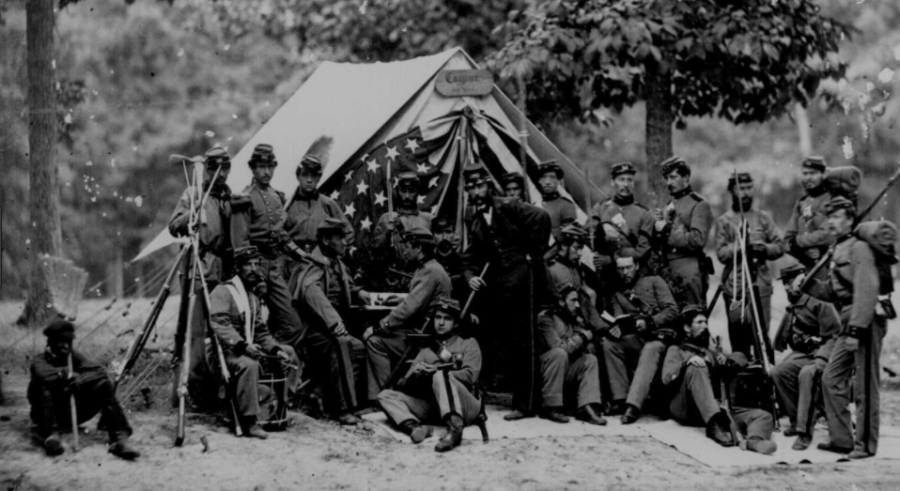 On April 24, 1865, the Sultana departed from Vicksburg northbound. Aboard her overcrowded decks were some 1,960 paroled prisoners, 22 guards from the 58th Ohio Volunteer Infantry, 70 paying cabin passengers, and 85 crew members. Many of the paroled soldiers were in poor condition having just left Confederate hospitals or prisons.

Additionally, it was a particularly bad day to be out on the water. The Mississippi River was experiencing high water levels as melting snow from up north flooded its banks. Fallen trees and other debris mixed into the fast-moving waterways. It was difficult to navigate these clogged and swirling waters come nightfall, but Captain Mason was determined to make his shipment of soldiers.

They stopped briefly in Memphis and continued on their journey by nighttime.

At approximately 2 a.m. on April 27, several miles from Memphis, Tennessee, one of the Sultana’s boilers exploded. Because the boat had been so packed, many of the passengers were crammed right by the boilers.

The explosion instantly killed hundreds, mostly soldiers from Kentucky and Tennessee who had been packed in right against the boilers. Many of them instantly died from shrapnel, steam, and the boiling water released from the explosion.

Sultana historian Gene Salecker explains how the smokestacks fell after the boiler explosion aboard the boat.

Then, another two boilers exploded.

“One minute they were sleeping and the next they found themselves struggling to swim in the very cold Mississippi River. Some passengers burned on the boat,” wrote Potter.

He wrote further that “the fortunate ones clung to debris in the river, or to horses and mules that had escaped the boat, hoping to make it to shore, which they could not see because it was dark and the flooded river was at that point almost five miles wide.”

The Sultana descended into chaos. Passengers aboard the 260-foot-long boat were torn between two choices: stay on the boat and possibly die from the fire or jump into the water to face the possibility of drowning. Either way, the odds of survival were slim. Soldiers having just left war now found themselves again fighting for their lives.

Accounts From Victims Of The Sultana Sinking 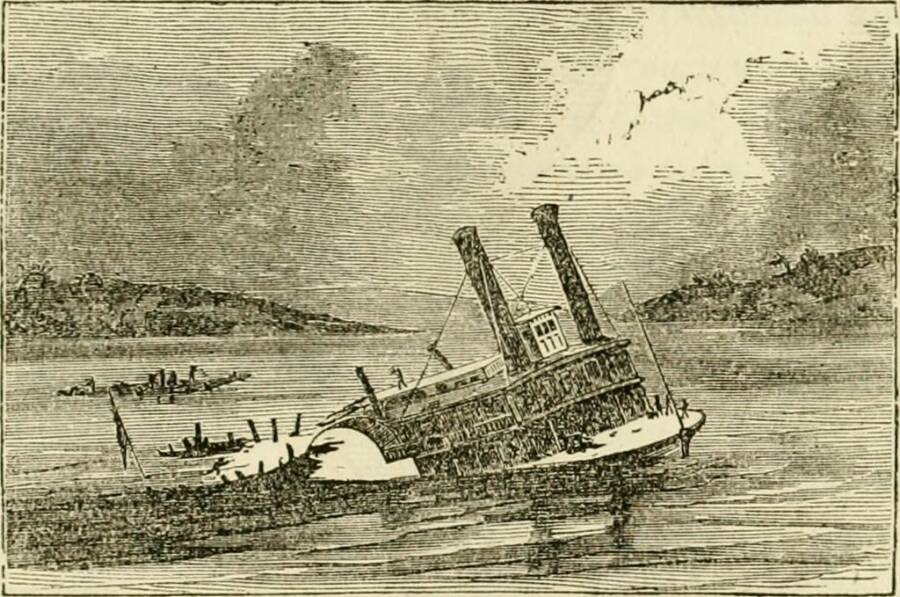 Library of CongressThe Sultana sank after its faulty boilers exploded on its way North.

As the Sultana began to sink nearby the small town of Marion deep in southern Confederacy territory, passing boats and local residents began a chaotic rescue operation to save the soldiers on board.

Newspaper reports indicate that a local man, John Fogelman, and his sons were among these rescuers. Fogelman’s descendant, current Marion Mayor Frank Fogelman said that the boat’s direction had caused the wind to blow fire toward the rear of the ship.

The paddle wheel on one side fell off and caused the boat to turn sideways before the other paddle wheel succumbed as well.

“I understand that the Fogelmans were able to put together some logs to make a raft and go out and take people off the boat as it drifted back this way,” Mayor Frank Fogelman shared about his ancestor’s heroic action. “In order to save time, they would set the people off in treetops, and go back to the boat to take more off.”

The soldiers aboard the Sultana, having just survived a bloody Civil War and horrendous conditions during their imprisonment as prisoners, were now dealt with another traumatic blow as the boat continued to catch fire and disappear into the Mississippi River.

“When I came to my senses I found myself… surrounded by wreckage, and in the midst of smoke and fire,” wrote one Ohio soldier in a collection of survivor essays titled, Loss of the Sultana and Reminiscences of Survivors.

The same Union soldier continued, “The agonizing shrieks and groans of the injured and dying were heart-rending, and the stench of burning flesh was intolerable and beyond my power of description.”

Another survivor, also from Ohio, wrote “There were some killed in the explosion, lying in the bottom of the boat, being trampled upon, while some were crying and praying, many were cursing while others were singing… That sight I shall never forget; I often see it in my sleep, and wake with a start.”

It only took a few hours before the Sultana reached the bottom of the Mississippi.

Some of the rescuers had been Confederate soldiers who lived in the area by the river near where the Sultana had sunk. It is incredible to think that only a few weeks before the incident these men would have been at each other’s throats. But amid the wreckage of the Sultana disaster, they were on each other’s sides.

Bodies from the Sultana wreckage had horrifyingly continued to surface downriver even months after the accident. While some were recovered, many were never found. Captain Mason was among the dead.

Conspiracy And Corruption, Aboard The Disaster 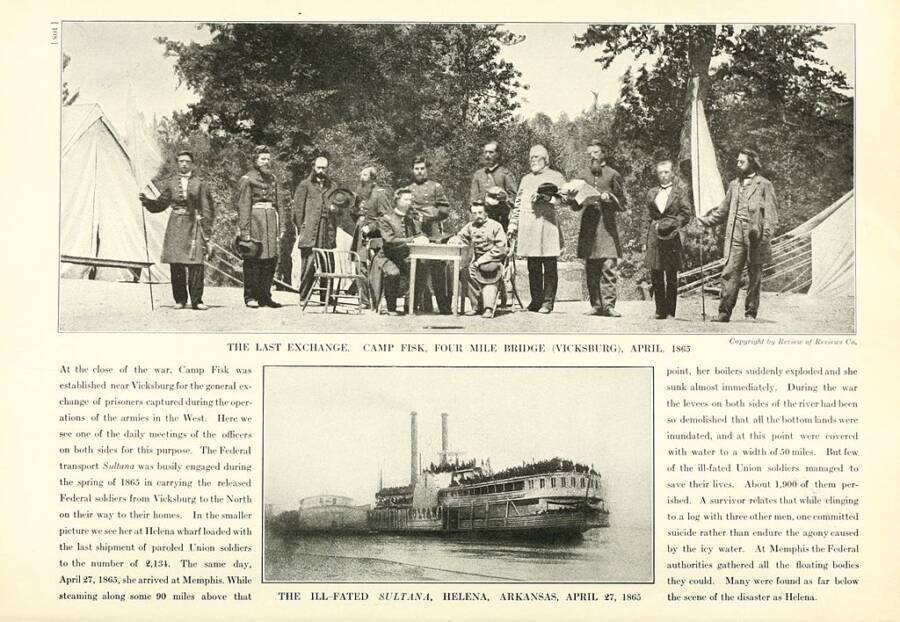 Arguably many of the factors which contributed to the destruction of the Sultana could likely have been avoided. Most obvious is the extreme overcrowding on board made possible by a bribe to officials and the severe weather conditions that the boat then faced.

Then, there was the improper handling of a damaged boiler. Apparently, Captain Mason and his chief engineer ordered one of their mechanics to do a quick (and likely faulty) repair in order to resume their voyage on the river.

“He told the captain and the chief engineer the boiler was not safe, but the engineer said he would have a complete repair job done when the boat made it to St. Louis,” Potter said.

But these explanations have not stopped internet sleuths and their imaginations from running amok. For example, many believe that the incident was not heard of because the government had intentionally downplayed the number of casualties. There were so many mistakes that could have been prevented by government oversight, it is possible that officials wanted to keep things quiet. 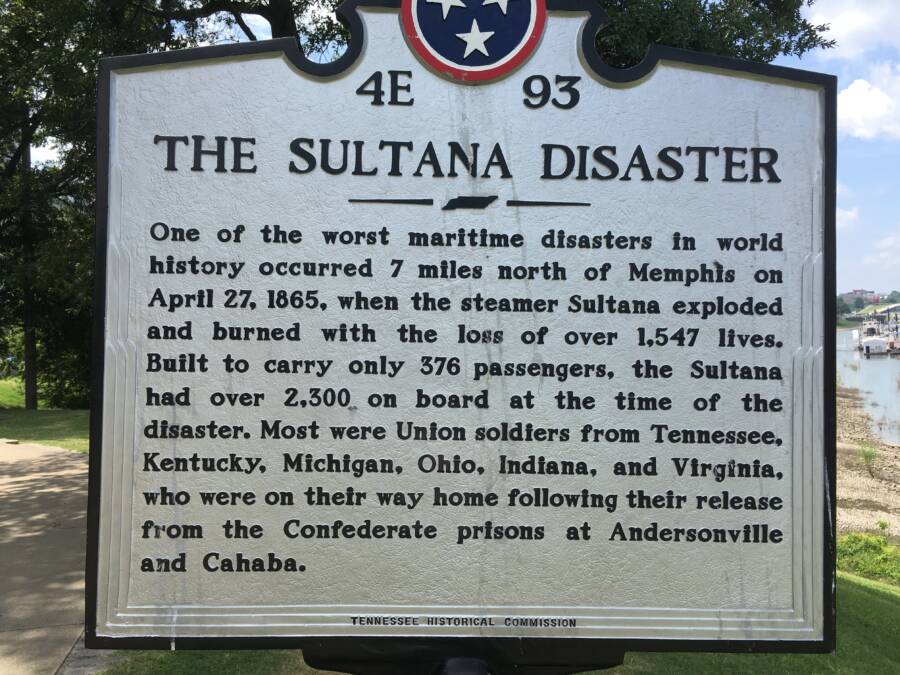 Wikimedia CommonsA plaque in Memphis remembers the victims aboard the Sultana.

A more extreme conspiracy posits that the whole incident had been a part of a master plan concocted by the Confederacy to sabotage Unionists on board. By one account, a known Confederate saboteur named Robert Louden had claimed to have actually launched a coal torpedo at the ship in an attempt to kill the enemy Union soldiers aboard. This claim was, however, mostly disproved.

But a more reasonable explanation as to why the disaster was so easily forgotten is that it had been overshadowed by a bigger, more historically significant tragedy — the assassination of then-president Abraham Lincoln.

While Lincoln’s shocking murder occurred nearly two weeks prior to the Sultana’s demise, the ripples of his assassination lingered long after.

In a way, the public had also been desensitized to extreme suffering after having endured a bloody Civil War that lasted for four years. To some, the lost lives of another 2,000 or so men perhaps seemed incomparable at the time.

Ultimately, no one was charged for the deaths of those on board the Sultana, even after an investigation and military tribunal was held. 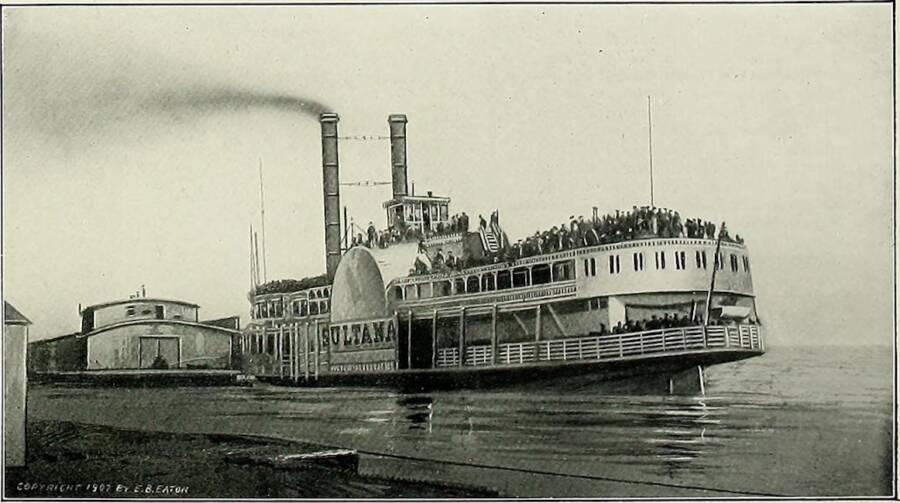 The Library of CongressThe sinking of the Sultana claimed more victims than the Titanic.

An estimated 1,800 men were lost by the Sultana. By comparison, the sinking of the Titanic took a little over 1,500 lives. The Sultana disaster remains an unresolved tragedy and the worst in American maritime history.

There is a silver lining to this tragedy, however. More than two decades later, survivors of the Sultana from across the country have met annually around the anniversary of the ship’s sinking to pay hommage.

After the last survivor died in 1936, the children and grandchildren of survivors who had grown up listening to the incredible survival stories of their forefathers picked up the tradition. These annual reunions are still held today.

For instance, Mary Beth Mason, the granddaughter of Sultana survivor William Carter Warner, remembers his bravery today. Warner had joined the Union Army’s 9th Indiana Cavalry as a teenager before he was imprisoned during the Civil War and eventually landed aboard the Sultana. When the tragedy struck, Warner managed to swim to the shore of the Mississippi River.

To this day, Mason holds on to her late grandfather’s official survivor’s certificate that he received in September 1888 from the Sultana Survivors Association.

For the descendants of Sultana survivors like Mary Beth Mason, keeping the memory of what happened alive is an important way to honor their ancestors. Roughly 100 of the survivors’ grandchildren and great-grandchildren meet every year on their behalf.

“We’ve done a lot to keep the story and to spread the story,” said Norman Shaw, who founded the Association of Sultana Descendants and Friends.

“These fellows felt history forgot about them… We’re following the wishes of the original survivors to keep the story alive.”

Now that you’ve learned about the sinking of the Sultana, the worst maritime disaster in American history, read these 12 harrowing tales from Titanic survivors. Then, learn the horrific story of America’s worst race riot.