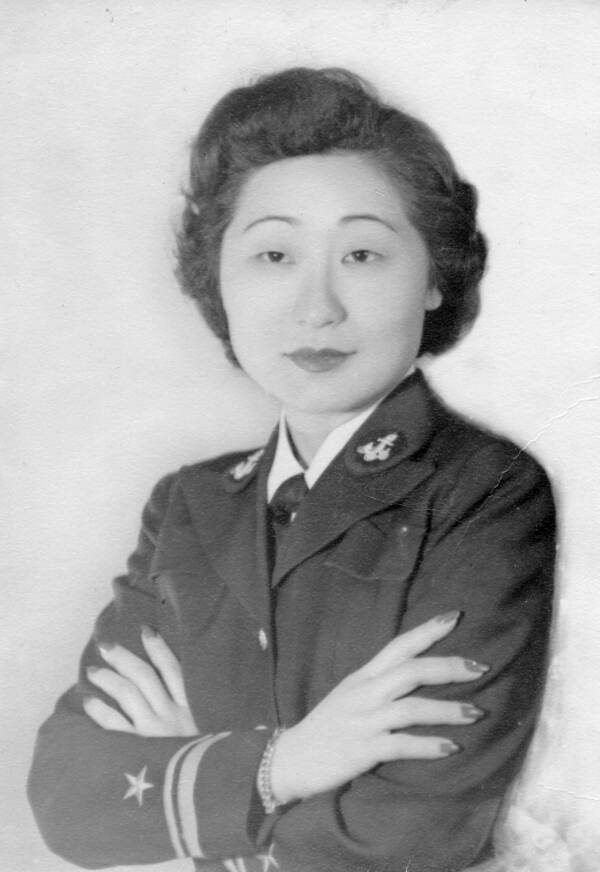 Susan Ahn Cuddy wasn’t the type to back down. While teaching male sailors how to use .50-caliber machine guns, one shrugged off her instruction and threw in an anti-Asian slur for good measure.

Cuddy told him: “I don’t care what you do up there. But when you’re down here with me, you do what I tell you to do.”

She was tough. She had to be. As the first female Asian American officer in the U.S. Navy, the 5’1″ Cuddy had what it took to fight alongside the men.

This is her impressive story.

Why Susan Ahn Cuddy Decided To Fight In WWII 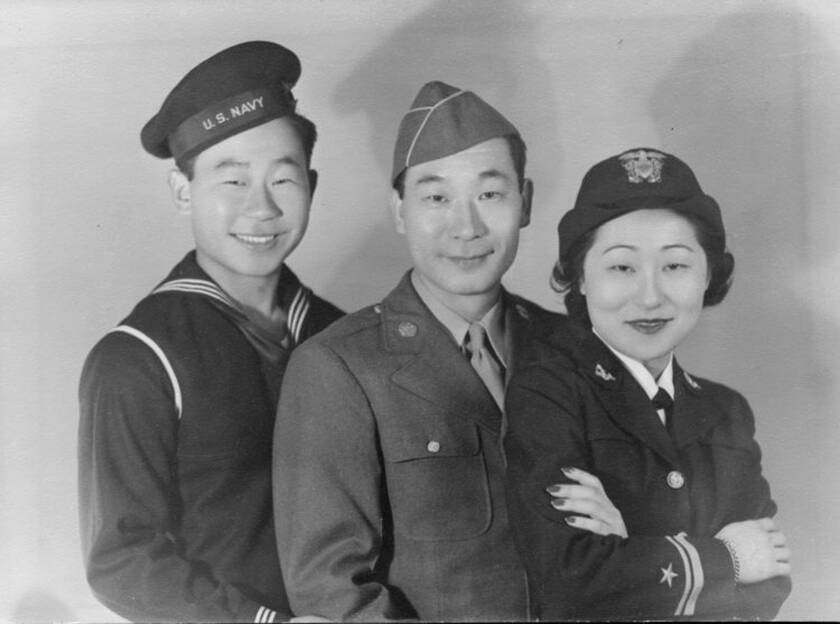 Philip Cuddy/Department of DefenseSusan Ahn Cuddy with her brothers, Ralph and Philip, who also served in World War II.

Born on Jan. 16, 1915, in Los Angeles, California, Susan Ahn Cuddy grew up with powerful role models. Her parents, Dosan Ahn Chang Ho and Helen Ahn, were the first Korean couple to immigrate to the United States.

Cuddy especially looked up to her father, a Korean independence leader who’d fled the country under pressure from Japan.

“I think my personal life [was] guided by my father,” Cuddy told the Los Angeles Times. Dosan encouraged Cuddy and her four younger siblings to be independent and strong.

“We grew up under a sense of freedom,” Cuddy remembered. Significantly, Dosan also embraced a liberal outlook when it came to women. According to Cuddy, he wanted his daughters to be “rough… not ladylike.”

Although Dosan disappeared from Cuddy’s life when she was around 10 — while in Korea he was arrested and imprisoned for his anti-Japan activism, and died in 1938 — she took his lessons to heart. Dosan told his children to never forget their roots. But, he said, they should also be “good Americans.”

So when the Japanese attacked Pearl Harbor on Dec. 7, 1941, Susan Ahn Cuddy knew exactly what she needed to do.

“When you’re Korean, you have no country, and the Japanese are the predators — and you have a father who gave up his life for it,” she told PBS, “you fight.”

The First Female Asian American Officer In The U.S. Navy 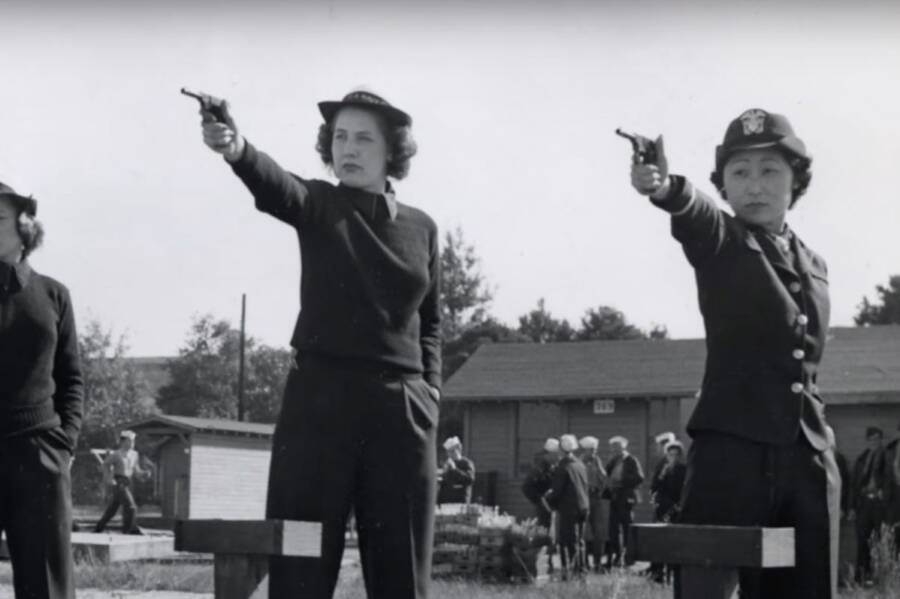 Philip Cuddy/Department of DefenseSusan Ahn Cuddy during a weapons demonstration.

Susan Ahn Cuddy wanted to fight for the United States. But she had to fight racism first.

Shortly after the Pearl Harbor attack, Cuddy applied to the U.S. Navy’s officer training school. They rejected her. Later, Cuddy found out that she had been turned away because she was “Oriental.”

But Cuddy wasn’t the kind of woman to give up easily. Undeterred, she enlisted as a service member instead.

Cuddy excelled at basic training, where she learned to work flight simulators and how to instruct aircrews on shooting moving targets. Her skill caught the eye of an officer, who suggested she go to officer training. This time, they accepted her. 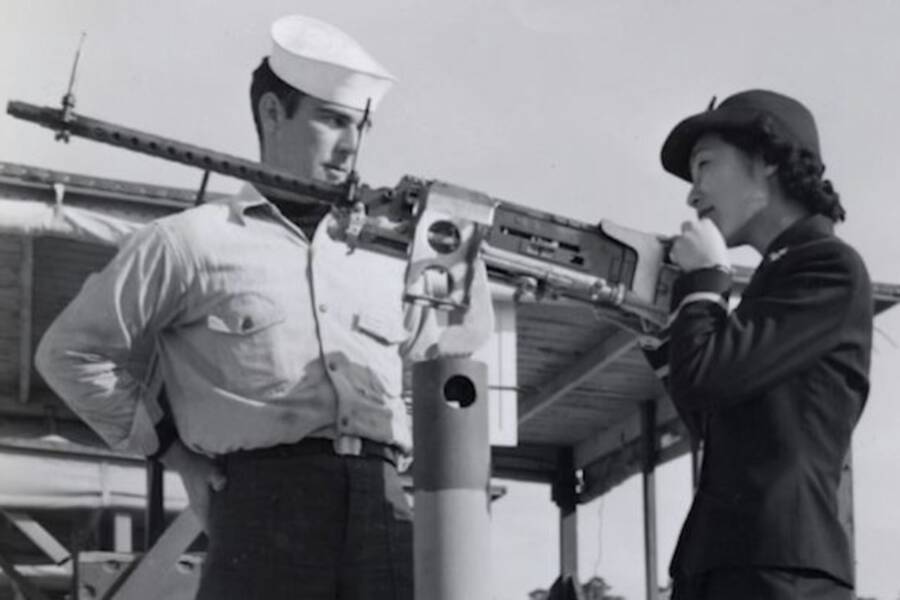 Philip Cuddy/Department of DefenseCuddy instructing a soldier on how to fire a .50-caliber machine gun.

“She was literally analyzing all of this information coming back from the reports about the fuselages of down planes, the captured planes,” Flip Cuddy, her son, explained.

“With her team that she led and also from the data from the engineers, they knew which part of the plane to shoot… She would instruct them to shoot at these targets and shoot at certain times.”

After Cuddy became a lieutenant, she also started to work with codebreakers in the Naval Intelligence Office.

“She became the chief of (the code-breaking) department,” Flip Cuddy explained. “She had 300 scholars working underneath her, and she thought it was funny because she went to San Diego State (and they were) all these Ivy League people.”

Though Cuddy encountered racism among the codebreakers — some were suspicious of her because of her race — she eventually found acceptance there and obtained top security clearance. 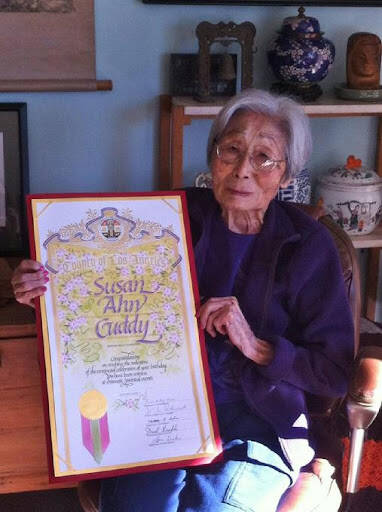 Philip Cuddy/Department of DefenseSusan Ahn Cuddy died at the age of 100 in 2015.

Even after Susan Ahn Cuddy left the Navy as a lieutenant in 1946, she kept forging her own path. She married her husband, Chief Petty Officer Francis Cuddy, despite anti-miscegenation laws and their families’ disapproval.

Following her naval career, Cuddy also worked at the National Security Agency and the Defense Department, gathering intelligence on the Soviet government. She finished her life in Los Angeles, where she worked at her family’s restaurant and encouraged civic engagement among her fellow Korean-Americans.

“She did not just get her foot in the door,” said Cuddy’s son Flip. “She opened it wide and made a seat for herself at the table.”

After reading about Susan Ahn Cuddy, learn about Doris Miller, the Black sailor who leaped into action during the Pearl Harbor attack. Or, look through these stunning photos of World War II.