Because he was black, Navy sailor Doris Miller was relegated to shining officers' shoes, making beds, and serving meals in the kitchen. Then his heroics at Pearl Harbor earned him the Navy Cross. 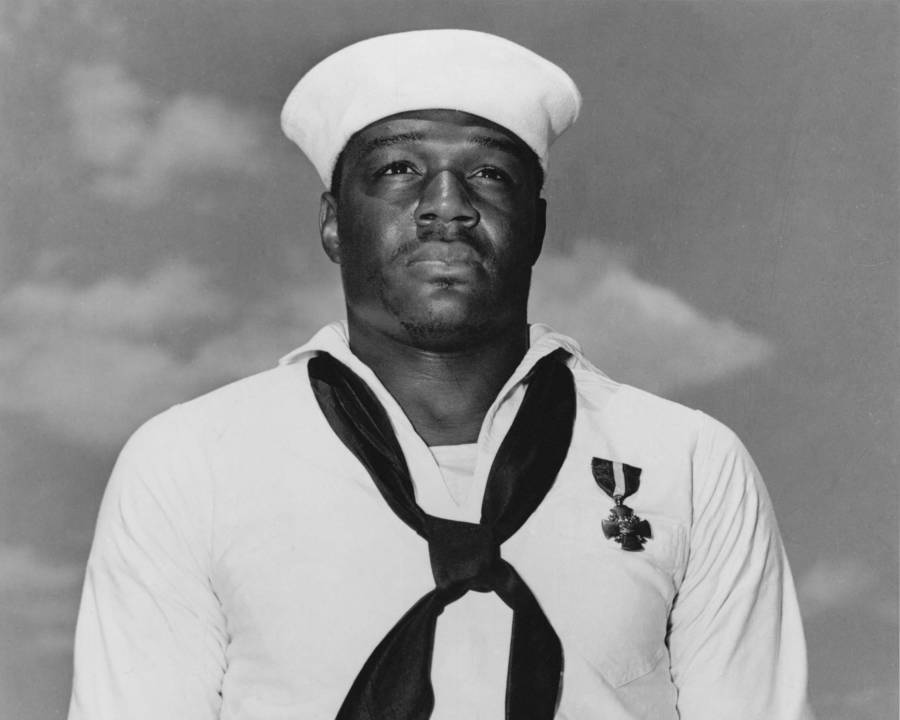 U.S. Navy/Wikimedia CommonsDoris Miller, the first African-American to earn the Navy Cross for valor, in May of 1942.

Doris Miller, known as Dorie to his friends and shipmates, was a U.S. Navy sailor who wanted to travel the world and support his family. But because he was black, he was forced to work in the kitchen as a ship’s cook, third class — until fate interceded.

When the Japanese attacked Pearl Harbor, Doris Miller snapped into action and distinguished himself in combat — a role his white superiors never thought he was cut out for. He manned a machine gun amid the chaos and even tended to the wounds of the very soldiers who’d been part of a system that had been keeping him down ever since he first enlisted.

But in the end, Doris Miller not only earned the respect he deserved, he helped launch a wider push for racial equality in America — even if he never lived to see it come to fruition.

Dealing With Adversity From The Start

Miller was born on Oct. 12, 1919, in Waco, Texas. His parents, Henrietta and Conery Miller, had four boys total. Miller was athletic and he played fullback for Moore High School in Waco. After high school, he decided to enlist in the Navy where he became a cook.

Following his training in 1939, Doris Miller was assigned to the USS Pyro, an ammunition ship based in Norfolk, Virginia. In early 1940, he transferred to the massive battleship USS West Virginia. He earned the respect of his shipmates by becoming the West Virginia‘s heavyweight boxing champion. Miller was a massive man with a huge frame at 6’3″ tall and more than 200 pounds.

No one tangled with Miller and walked away easily, on the ship or off. His heavyweight championship was no small feat since the West Virginia had 2,000 men on board.

In terms of his ordinary duties, Miller, like other African-American sailors of his day, was generally relegated to service-based roles on ships. The Navy did not allow sailors of color to enlist in combat roles. Even with this blatant racism on board, Miller served his ship proudly as a ship’s cook.

After brief training at gunnery school on board the USS Nevada (that training would prove vitally important later on), he returned to the West Virginia in early August of 1940. Miller’s ship eventually found its way to Pearl Harbor, Hawaii, as part of the Pacific Fleet.

It was at Pearl Harbor that Doris Miller made his mark on American history.

He arrived on duty at 6 a.m. by starting breakfast for the ship’s officers. He was doing laundry below decks when general quarters sounded. Doris Miller’s battle station was the antiaircraft battery magazine amidship. When he arrived on deck, Miller found his gun was damaged by a Japanese torpedo. 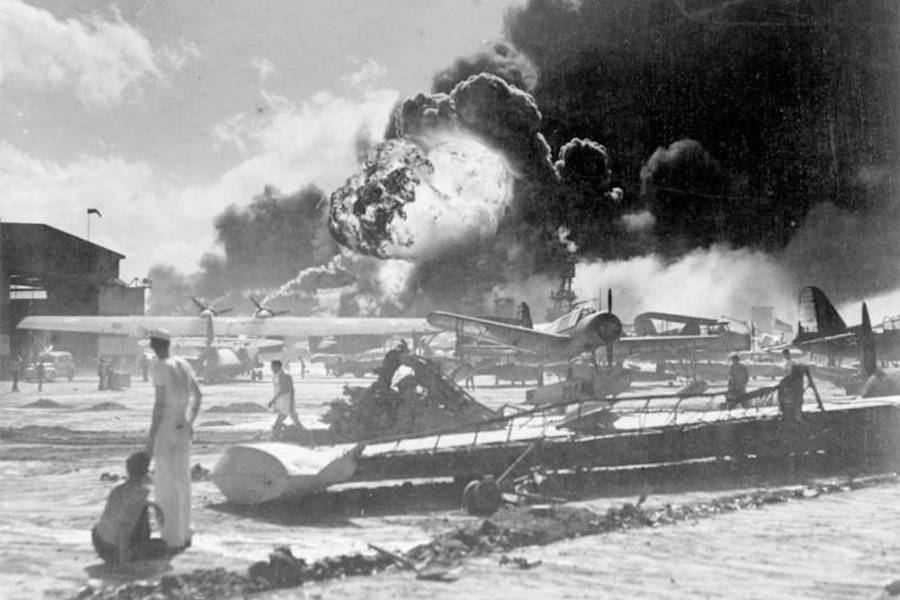 An officer ordered Miller to help carry the wounded off the main deck. Miller’s former role as a fullback on his high school football team suited him well. After rescuing several shipmates, all the while bombs and torpedoes were exploding in Pearl Harbor, he was ordered to evacuate Capt. Mervyn Bennion off the bridge because he was wounded. The captain refused to abandon his post, and he died from his wounds.

Undaunted, Doris Miller and two other crewmates loaded two 50-caliber Browning anti-aircraft machine guns. One crew member fired one, while Miller, despite having no training on these guns whatsoever, fired the second. The third crew member went between both guns to load them.

Miller described what it was like firing a machine gun at incoming aircraft. “It wasn’t hard. I just pulled the trigger and she worked fine. I had watched the others with these guns. I guess I fired her for about fifteen minutes. I think I got one of those Jap planes. They were diving pretty close to us.”

Crewmates dispute the fact that Doris Miller shot down a plane, but that’s only because other ships were firing their anti-aircraft guns at the divebombing Japanese planes. Even if Miller didn’t get a plane, the wall of bullets screaming towards the planes prevented even worse losses in Pearl Harbor.

After the Japanese planes left, Doris Miller helped rescue shipmates from the water before the West Virginia sank with 130 men killed.

Miller Leaves His Mark On History

News of Doris Miller’s bravery took time to reach the upper echelons of government. On Dec. 15, 1941, the Navy released its commendations for actions in Pearl Harbor. The list included one “unnamed Negro.” It wasn’t until March of 1942, at the behest of the NAACP, that the Navy formally recognized Miller’s heroism.

The United States needed good news and heroic deeds following the bombing of Pearl Harbor, and Miller’s was one such story.

Sen. James Mead of New York introduced a bill to award him the Medal of Honor, but that effort failed. Doris Miller received the Navy Cross, the second-highest award for military service, for his actions on Dec. 7, 1941.

In his citation of April 1, 1942, Secretary of the Navy Frank Knox wrote:

“For distinguished devotion to duty, extraordinary courage and disregard of his personal safety during the attack on the Fleet in Pearl Harbor on December 7, 1941. While at the side of his Captain on the bridge, Miller despite enemy strafing and bombing, and in the face of serious fire, assisted in moving his Captain, who had been mortally wounded, to a place of greater safety and later manned and operated a machine gun until ordered to leave the bridge.” 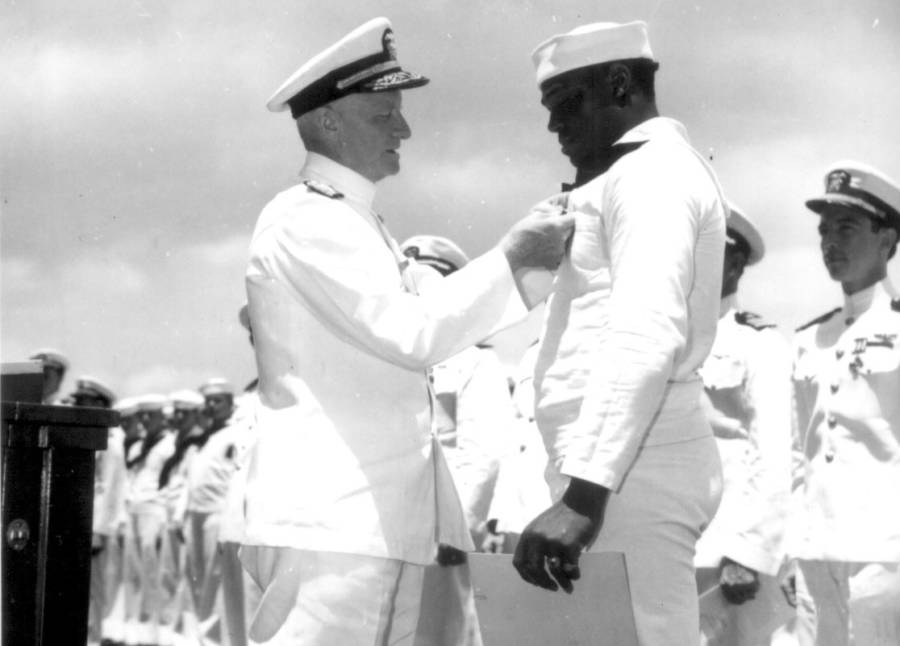 Adm. Chester Nimitz, a Navy legend, personally pinned the Navy Cross to Miller’s left breast pocket onboard the aircraft carrier USS Enterprise on May 27, 1942. Nimitz said, “This marks the first time in this conflict that such high tribute has been made in the Pacific Fleet to a member of his race and I’m sure that the future will see others similarly honored for brave acts.”

Miller was the first African-American man honored with the Navy Cross.

Sadly, Doris Miller died in action on November 24, 1943, onboard the USS Liscome Bay in the Pacific Ocean. The newly constructed ship was an escort carrier, and a single Japanese torpedo sank the vessel off the coast of Butaritari Island. Two-thirds of the ship’s crew died with the ship because it sank quickly.

But that’s not the end of Miller’s story. 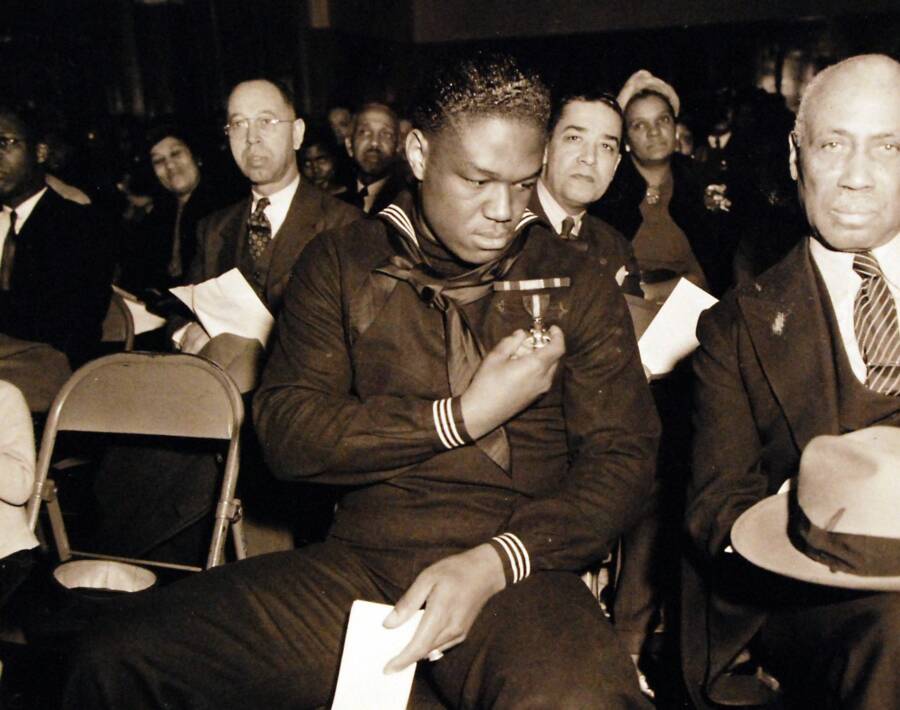 U.S. NavyDoris Miller wearing his Navy Cross during his visit to the Naval Training Station in Great Lakes, Illinois on Jan. 7, 1943.

Following Miller’s actions of heroism on board the West Virginia, the Navy took steps to allow African-Americans to serve in combat roles.

This started a roll-back of the Navy’s policy of racial segregation. The military then fully integrated African-American men into units with whites. Some modern scholars even assert that Doris Miller’s actions at Pearl Harbor in 1941 started a chain of events that led to the Civil Rights movement. 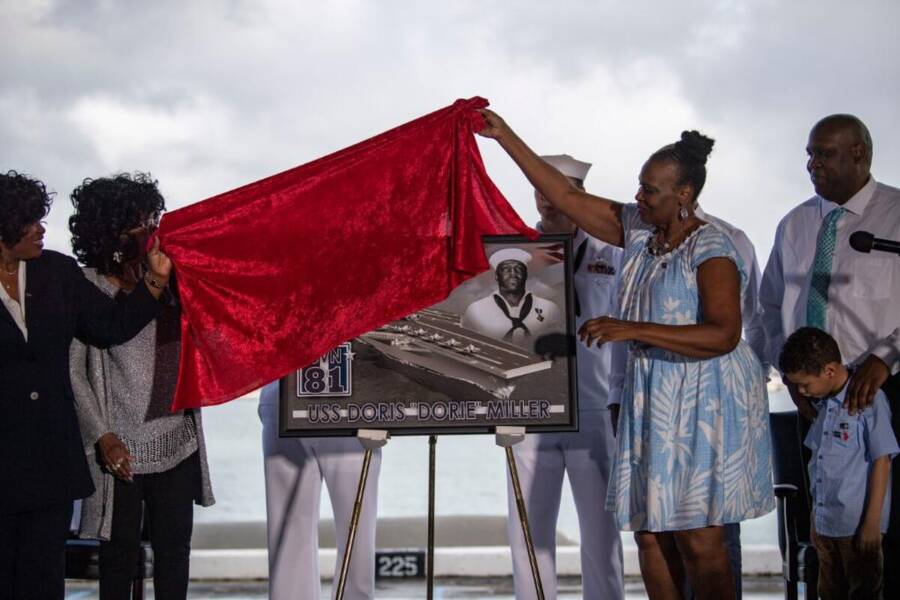 Though Doris Miller received the Navy Cross and thus secured his place in history among U.S. sailors, his story often went overlooked. But in 2020, nearly 80 years after he proved himself a hero, he won a whole new level of recognition unlike anything in American history.

On Martin Luther King Day, the U.S. Navy honored Miller by making him the first back man in U.S. history to have an aircraft carrier named after him. The USS Doris Miller is now officially scheduled to launch in 2028.

“I think that Doris Miller is an American hero simply because of what he represents as a young man going beyond the call of what’s expected,” said Doreen Ravenscroft, president of Cultural Arts of Waco (Texas) and team leader for the Doris Miller Memorial, ahead of the naming ceremony. “Without him really knowing, he actually was a part of the civil rights movement because he changed the thinking in the Navy.”

At the naming ceremony, further tributes to Miller rolled in as officials paid homage to the man who had perhaps never truly gotten his full due.

“As we celebrate the legacy of Martin Luther King Jr., we recognize that for too many of these warriors the liberty they defended overseas was denied to them and their families here at home simply because of the color of their skin,” said Acting Navy Secretary Thomas B. Modly.

According to Modly, the new ship will be the most powerful ever built — a fitting tribute to Doris Miller, a man who showed unimaginable strength in the face of adversity.

After learning about Doris Miller and his heroism at Pearl Harbor, read about Henry Johnson and the Harlem Hellfighters, the overlooked black heroes of World War I.