For 15 years after the murders, Susan Edwards and her husband Christopher spun elaborate lies that her parents were still alive — all while draining their bank accounts.

The modest semi-detached at 2 Blenheim Close in Mansfield, England, doesn’t look like much. But until 2013, its back garden held a sinister secret. There, Susan Edwards had buried her parents after shooting them dead with her husband, Christopher.

For 15 years, Susan and Christopher had kept their secret. Susan penned fake Christmas cards from her parents and told family members that the elderly couple had moved to Ireland. Meanwhile, she and her husband had pilfered a total of £285,286 from their savings and spent the money on celebrity memorabilia. 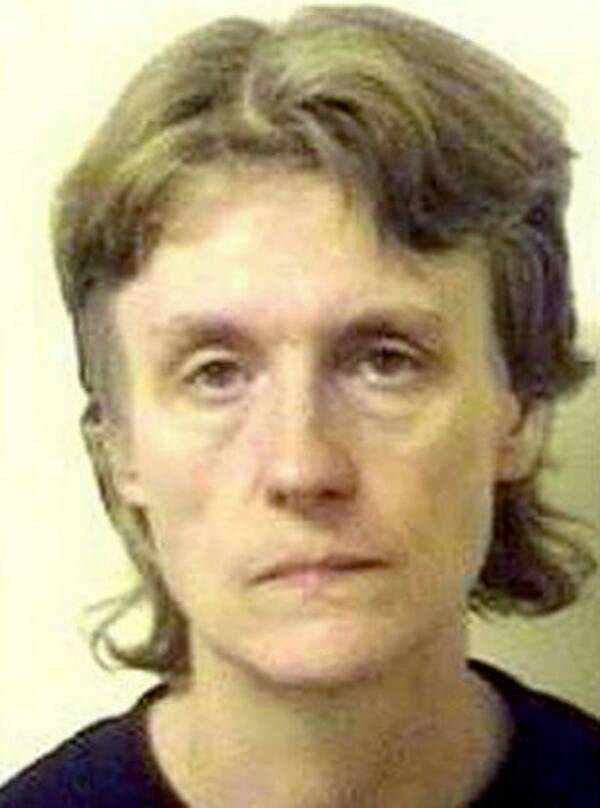 And although the murderous couple might have gotten away with it had it not been for their devotion to their collectibles, in the end, Susan and Christopher got tangled in their own elaborate web of lies.

And now their shocking story has been turned into a British miniseries called Landscapers.

Not much is known about Susan Edwards’ early life. She was born around 1958 to William Wycherley, then 46, and his 23-year-old wife, Patricia, who was already pregnant when they married.

Susan later claimed that she’d had an unhappy childhood. To the police, she said that William had abused her until she was 11. Patricia, Susan alleged, had stood silently by. 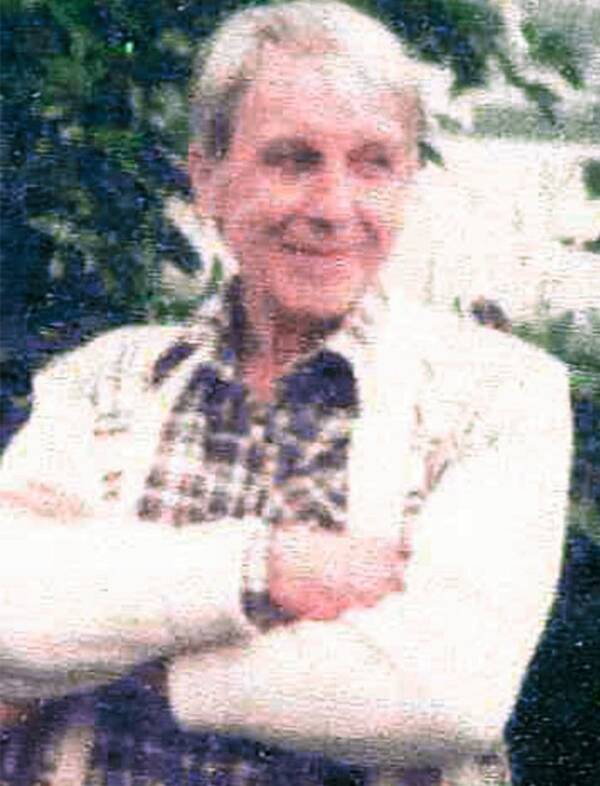 As she got older, her grievances against her parents grew. In the 1970s, Susan’s step-grandmother left her £10,000 that had once belonged to her maternal grandmother — and which Patricia claimed actually belonged to her.

Although Susan tried to right the wrong her mother saw by using the money to take her on a trip to America and help with the down payment on a new house, she later began to feel that her mother’s ingratitude was tantamount to cheating her of the inheritance.

Meanwhile, Susan’s life went on. After briefly working as a librarian, Susan met her husband, Christopher, through a dating agency. They bonded over their love of memorabilia — Christopher liked military history while Susan loved Hollywood’s Golden Age celebrities — and they married in 1983.

But as they shunned the outside world and spent Christopher’s paycheck on collectible stamps and autographs, their financial difficulties mounted.

“They looked as though they needed money,” one neighbor recalled. “They dressed old-fashioned, they didn’t have a car, they didn’t even have a bike.” 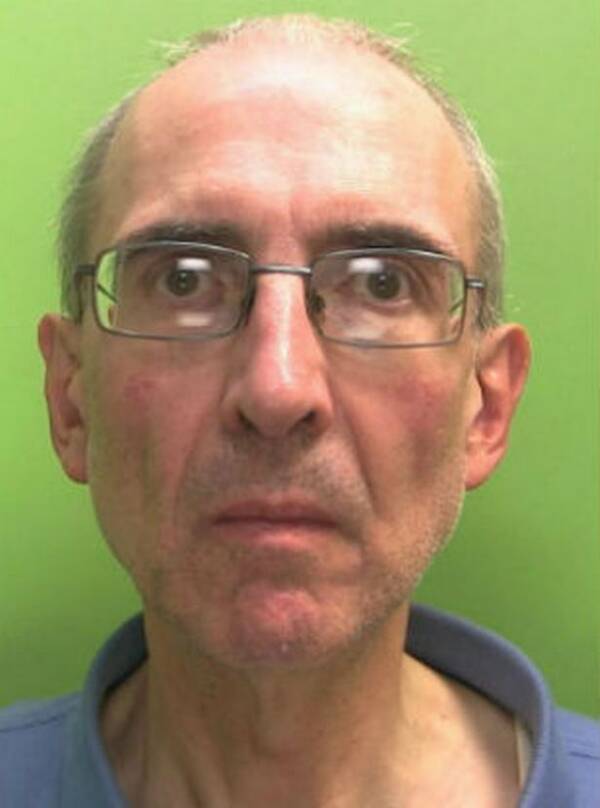 One local shop owner remembered that Christopher always seemed concerned about what he spent. “He was very careful with his money,” she said. “When you gave him the change, he’d count it penny by penny. He’d stand by the door and look at the receipt and check.”

According to police, Susan and Christopher figured that there was an easy way to get lots of money fast. With murder in mind, they drove to Susan’s parents’ house in the East Midlands for the May Day bank holiday in 1998.

There, Christopher and Susan shot Susan’s parents twice in the chest each, wrapped their bodies in a duvet, and buried them three feet underground in the back garden. The following Tuesday, when the banks reopened, Susan Edwards withdrew £40,000 from their account. But it was just the beginning.

For 15 years, Susan and Christopher Edwards guarded their secret. As time passed, they made it seem like Patricia and William were still alive.

“I should explain that — with my father getting elderly and my mother not always in the best of health — they had been traveling around Ireland because of the good air on and off for some years,” Susan wrote to a relative in 2007.

On another occasion in 2011, Susan raved that her parents were enjoying a “second youth” and wrote, “it is good to see them with such zest.” 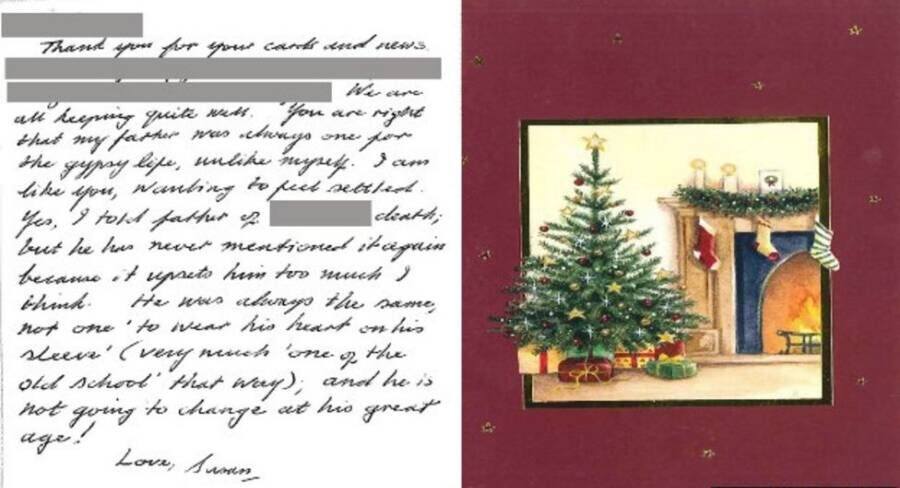 Nottinghamshire PoliceIn this 2010 card, Susan Edwards wrote to a relative, “my father was always one for the Gypsy life.” He’d been dead 12 years.

All the while, Susan and Christopher were siphoning money from William and Patricia’s accounts. They set up loans and credit cards under the dead couple’s name, faked pension and disability benefits documents, and even sold their house with a forged signature. Meanwhile, the bodies of William and Patricia Wycherley still lay underground — and undetected.

The money they stole didn’t go into savings or real estate, however. Instead, Susan and Christopher squandered thousands of pounds on celebrity memorabilia. Once, they spent £14,000 on Gary Cooper collectibles. Another time, they dropped £20,000 on a collection of autographs.

But by 2012, they started to get nervous. That year, William Wycherley was turning 100, and the Department for Work and Pensions asked for a face-to-face interview to mark the occasion. Buckingham Palace had also written inquiring where to send a telegram to congratulate the man on reaching his centennial birthday.

Susan and Christopher panicked and fled to Lille, France, with their most valuable film memorabilia. However, they quickly discovered that they couldn’t access the Wycherleys’ bank accounts from abroad. But they refused to sell anything they’d brought with them. So, as money started running out, Christopher called his stepmother to get more.

His elaborate lie would instead blow the case wide open.

How Susan Edwards Got Caught

In 2013, Elizabeth Edwards received a strange call from her stepson, Christopher. He needed money, he said. And then he told her a shocking story.

According to Christopher, his wife Susan had been sleeping at her parents’ place in May 1998 when she heard a bang during the night. When Susan went to investigate, she found that her mother, Patricia, had shot and killed her father, William.

From there, Christopher said, things had escalated. Patricia had mocked Susan and said that she’d slept with Christopher in 1992. Then, Susan shot her mother — but Christopher didn’t want to “throw her to the wolves” by going to the police. 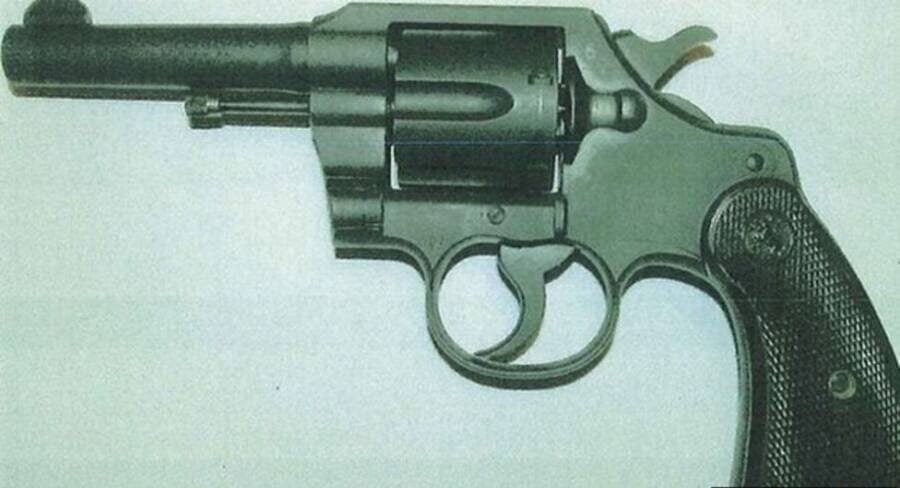 Susan Edwards, who repeated this story at her trial, offered even more details. Claiming that she’d hidden her crime from Christopher for a week, she said that her mother had provoked her.

“[My mother] said I was an unwanted child, she wanted an abortion, they both wanted an abortion,” Susan Edwards told the court. “She told me she knew that my father abused me. At some point she threw the gun on the bed. I picked it up.”

To make her stop talking, Susan said, she shot her mother in the chest.

But Elizabeth was unswayed by her stepson’s story. She called the police and told him exactly what he’d said.

“When we received that call on October 1, it was difficult to believe that what she said had happened could have happened,” admitted Detective Chief Inspector Rob Griffin. “But we took it seriously and that is when the investigation started.”

The police began to dig up the garden at 2 Blenheim Close. Then, on Oct. 9, 2013, they found the remains of William and Patricia Wycherley.

Penniless and backed into a corner, Christopher and Susan Edwards turned themselves in soon afterward.

“Later on today we are going to surrender ourselves to the U.K. Border Force Authorities at the Eurostar terminal at Lille Europe station,” Christopher wrote in an email to the police on Oct. 30.

“We would prefer to do this… since my wife is already sufficiently frightened. Please could you notify the U.K. Border Force at Lille Europe so that they may expect us.”

Susan Edwards And The Landscapers Miniseries

The police didn’t buy Christopher and Susan Edwards’s story. To them, the murder of William and Patricia Wycherley looked more like a calculated kill than a crime of passion.

For one thing, both victims had been carefully shot twice in the torso. For another, their daughter had immediately withdrawn thousands from their bank account. And, of course, Susan and Christopher had covered up what they did for 15 years.

Police suspect that it was Christopher, urged on by Susan, who pulled the trigger. After all, he admitted to having experience with guns and had even been part of a shooting club. 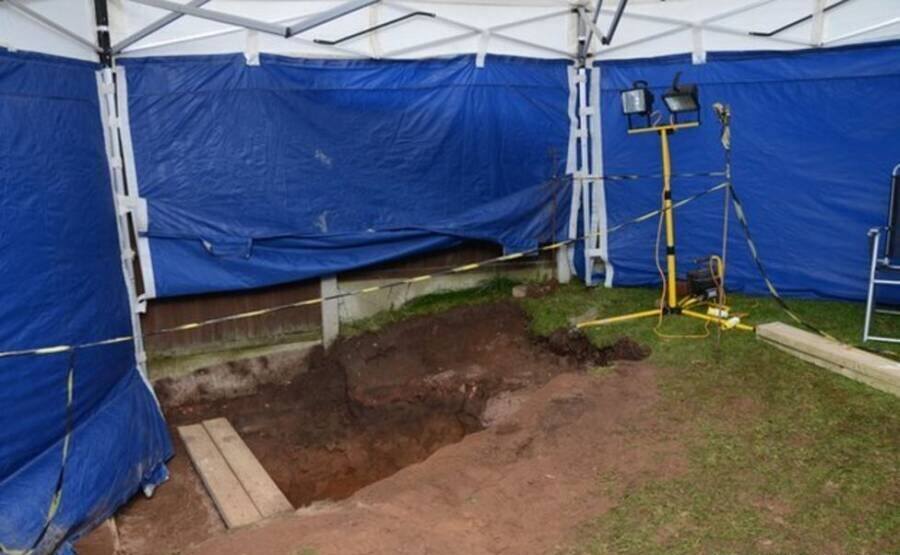 “This is a couple that appear to have planned for some years to exact revenge for the taking of inheritance that had been due to Susan from her step-grandmother,” DCI Rob Griffin explained.

“They had spent a number of years planning how they might get some of that money back and they decided on a course of action. They said: ‘We will travel to Mansfield, we will kill this couple, who we know will not be missed, and take all of their money’.”

He added, “I would describe that as pretty cold and calculating.”

In 2014, both Susan and Christopher Edwards were found guilty. They were each sentenced to at least 25 years in prison for the double murder.

Their story doesn’t quite end there, however. Soon, it will play out on television in a miniseries called Landscapers. Starring Olivia Coleman as Susan Edwards and David Thewlis as Christopher Edwards, the show will go inside the couple’s desperate attempt to avoid detection.

“Come on, Susan,” says one of the detectives in the trailer. “You do want us to know the truth, don’t you?”

But for Susan Edwards, the truth was a slippery, difficult thing. She preferred to live in a world of her own making. There, she could surround herself with hand-selected moments of the past — and ignore the day in May when she’d killed both her parents.

After reading about the chilling crimes of Susan Edwards, see why 16-year-old Erin Caffey killed her family. Or, discover the grisly story of John List who killed his family so he wouldn’t have to tell them he’d lost his job.