Taiji, Japan Is A Little Town With A Big Dirty Secret

The dolphins that are captured for a life in captivity in a marine park actually have it better than any of those left behind. 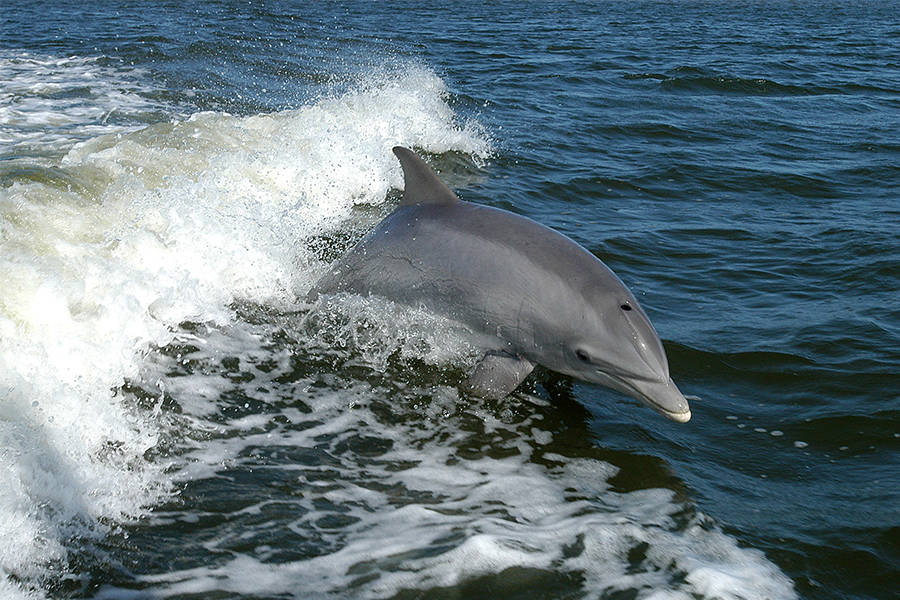 Wikimedia CommonsA bottlenose dolphin in the wild. In Taiji, they are one of the most coveted dolphin species.

Every year, the fishermen of Taiji, Japan on the island of Honshu gather to perform a ritual that dates back to the 1600s when the island was supported entirely by the whaling trade.

In early September, fishermen from across the island congregate on the southern coast, to meet their ritual’s guests of honor: dolphins. In the six months between September and March, thousands of dolphins, including the common bottlenose and rarer false killer whales, pass through the southeastern Pacific waters off Japan’s coast as part of their deeply ingrained, age-old migration patterns.

As the dolphins near Honshu, the fishermen head out in droves aboard vessels known as “banger boats,” and form a semicircle around one of the island’s coves. The boats have long metal poles attached to the sides that the fishermen bang on to distract the dolphins. In turn the dolphins, with their echolocation skills scattered by the metallic banging, band together in a herd and move away from the sound – directly into the cove. Once the herd is inside, nets are dropped and the frightened animals are trapped.

The practice is known as drive hunting and the herding is only the first step in a gruesome and tragic three-step ritual that’s brought international infamy and controversy to the tiny town of Taiji.

On The Outside Looking In 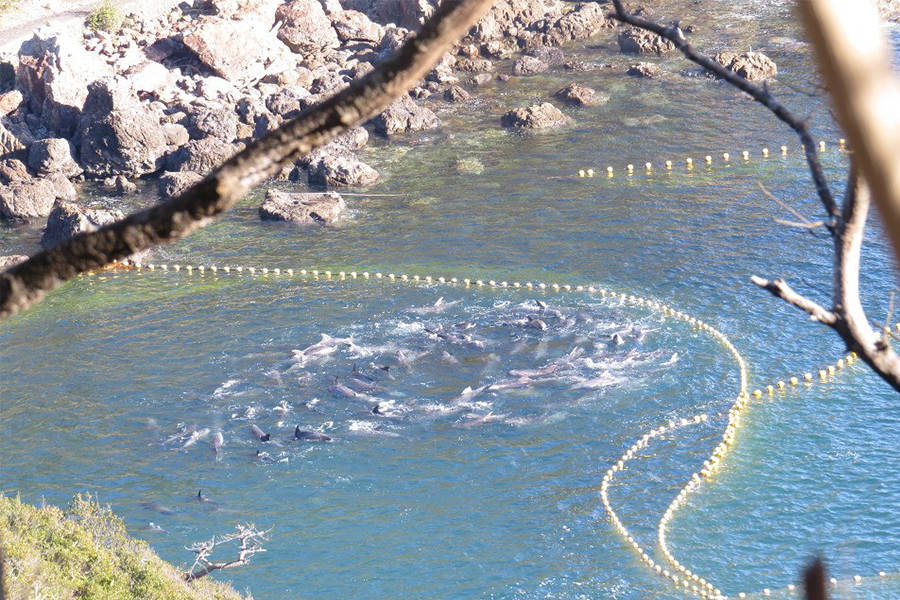 FlickrHerded dolphins trapped in the cove.

Any visitor to Taiji, even one who’s heard the dark rumors about its sordid history, would have a hard time believing what goes on there. Statues of whales and dolphins dot the town’s parks, gift shops sell t-shirts adorned with smiling cetaceans, and colorful murals of larger-than-life marine mammals adorn the sides of buildings.

There are museums that at first glance are dedicated to educating the public about the island’s history of whaling and the dangers it once posed. There are public holidays that celebrate dolphins and whales, and there are companies that take visitors on tours, hoping to catch a glimpse of these magnificent creatures.

Ask the local authorities how they feel about dolphins and the answer is resoundingly positive. They believe that the dolphin is a gift, that it offers them a host of economic opportunities that they are meant to capitalize on.

In reality, while the island does benefit from the dolphins, some locals’ income is generated by much darker means than museum tours and whale watching trips. 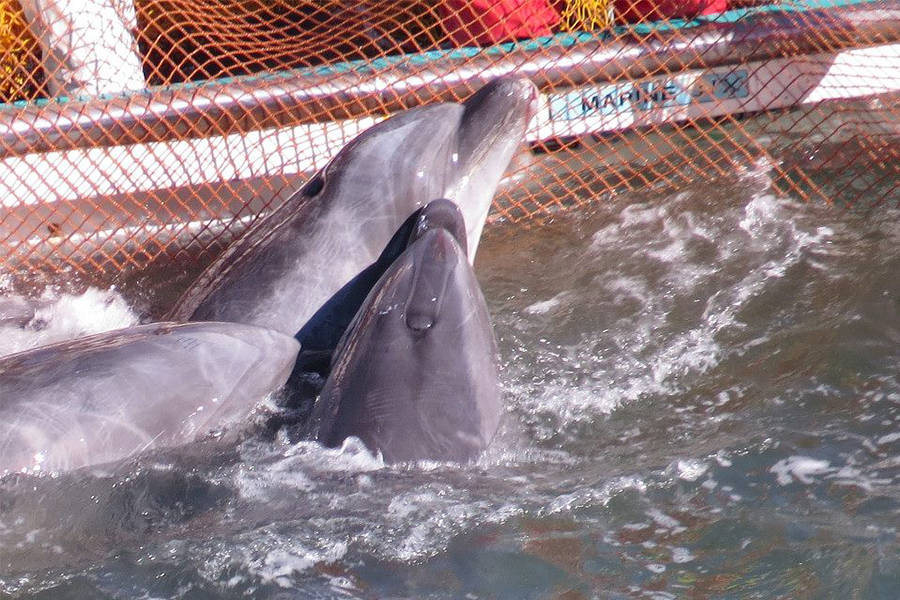 FlickrA family of bottlenose dolphins trapped in a net.

After the dolphins are herded into the cove, the next phase begins. After leaving the dolphins to settle for the night, the fishermen return the next morning. As the banger boats man the outer edges of the cove, continuing their banging, smaller, quieter boats and divers enter the cove.

Several dolphins, usually the prettiest bottlenose ones, are selected to be sold to dolphinariums, aquariums, marine parks, and “swim with dolphins” resorts around the world. The World Association of Zoos and Aquariums (WAZA) has banned the sale and transfer of dolphins from Taiji, but many parks not affiliated with the group do purchase the mammals. Taiji is the largest supplier of dolphins in the world, and fishermen can make $100,000 per dolphin.

Several other organizations around the world, such as the U.S. National Marine Fisheries Service, refuse permits for marine parks to import dolphins and small whales for fear they were captured in Taiji. In 2006 a park in the Dominican Republic placed an order for 12 live dolphins, referred to by media as the “Taiji Twelve” from Taiji. Due to international outrage, the order was eventually canceled.

Activists around the world have spoken out against the inhumane capture methods, especially after it was revealed that many of the animals die from shock or injury before even making it out of the cove. 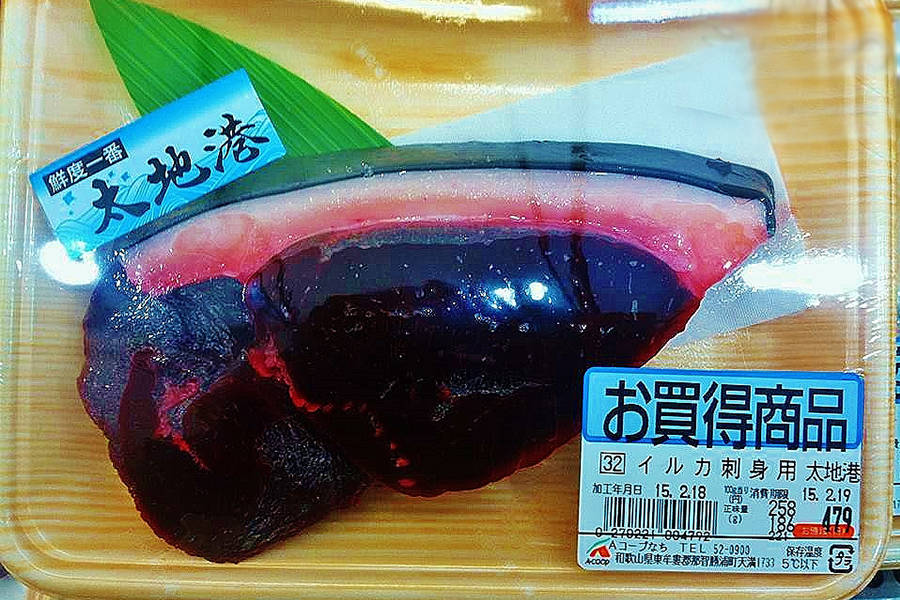 After the live animals are selected for sale, the remaining dolphins are moved by banger boats to a smaller area less accessible by foot and far from witnesses.

There, the dolphins are massacred.

Fishermen in small boats stab feverishly into the water with long spears while divers in the water use knives to slit dolphins’ throats. Quickly, the clear blue waters of the Pacific turn a horrifying crimson. As they lay dying, the animals are hauled by the dozens into the boats. Piled so high with dolphin carcasses that they risk sinking, the boats head back to a hard-to-find dock where the bodies are sold.

While the live dolphins are destined for a life in captivity, the dead are bound for dinner plates. Despite the fact that dolphin meat is exceptionally high in mercury due to a diet high in fish, proponents claim the meat is safe for human consumption. Indeed, supermarkets across Honshu advertise dolphin meat alongside more common seafood.

In 2003, the Japanese Ministry of Health at long last delivered a message, warning against eating dolphin meat, especially among children and pregnant women. 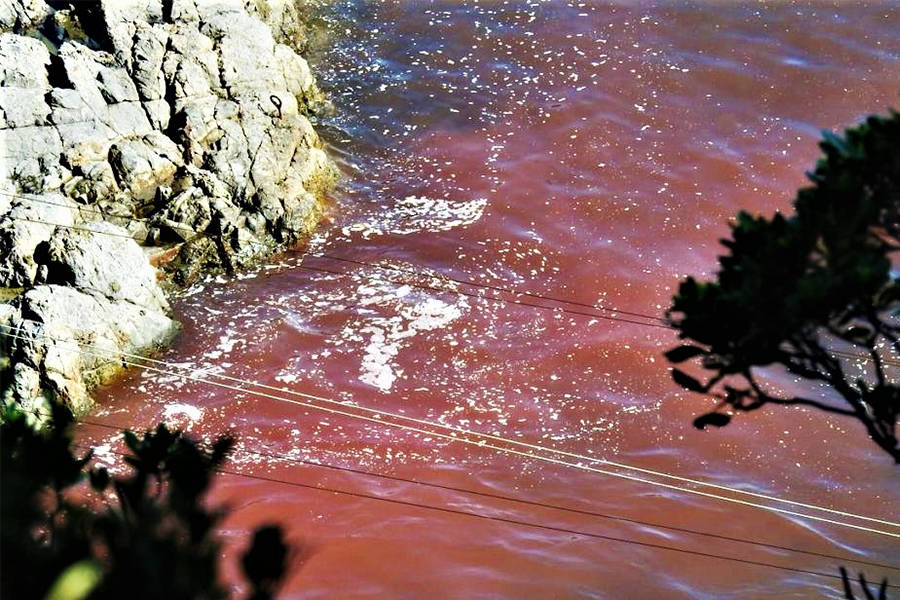 Flickr
Red waters of the cove where the dolphins are slaughtered.

For such a controversial and inhumane practice, the dolphin drives of Taiji went relatively unnoticed by the rest of the world for much of the 20th century. Then, in 2009, a documentary titled The Cove was released that brought new attention to the macabre ritual.

The documentary was filmed covertly, mostly by aerial cameras and under cover of darkness. The footage obtained by the crew went international, and the film even won the Academy Award for Best Documentary in 2010.

After the documentary’s release, hundreds of organizations and thousands of concerned civilians and activists descended on Honshu demanding a halt to the practice. Activists say that almost no changes have been enacted. The Japanese government, meanwhile, says new measures are in place to prevent pain among the dolphins.

In 2011, the government outlawed the slitting of dolphins’ throats and limited the killing method exclusively to driving a metal pin into their necks. The government claimed that this method caused instant death and no suffering, though video footage taken by a veterinary team in 2011 revealed that the dolphins actually take up to four minutes to die by this method.

After the attention brought on by The Cove the Taiji fishermen changed their ways as well. No longer do they hunt in the open where nosy documentary filmmakers and other onlookers can see. After the dolphins are driven into the cove, tarps are stretched across the water’s surface. Now, all killing is done by divers in the water, under the tarps.

Though the killings may no longer be visible, the blood seeping out from under the tarps suggest this ritualistic practice is as inhumane as ever.

After learning about the Japanese village of Taiji, view photos of Japan’s imperial era. Then, watch killer whales chase down a fishing boat for food.