The skeletons had been bent and folded up in piles — and scientists believe that's what kept them from being eroded by the archipelago's acidic soil. 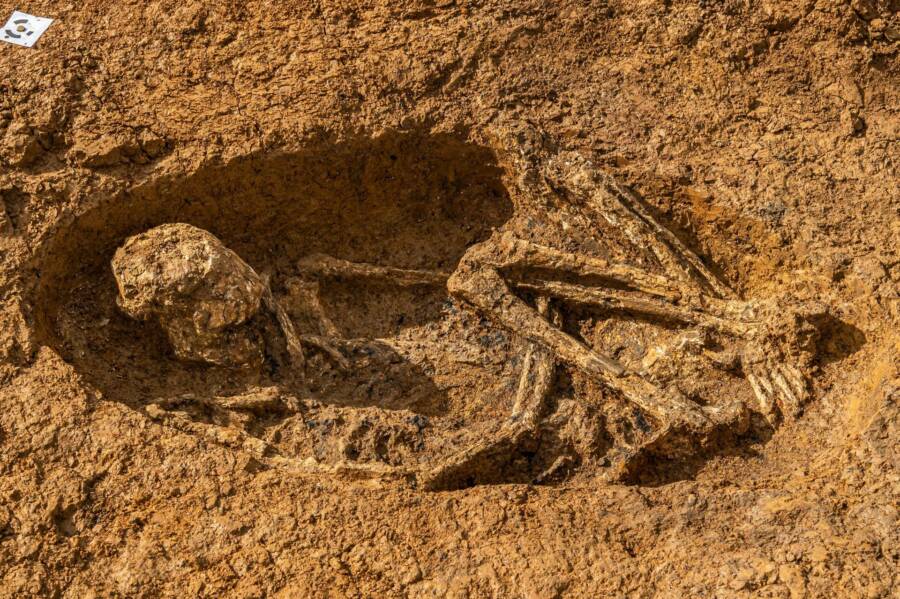 INRAPBurial No. 67, whose subject was buried in a semi-seated position like dozens of others.

In preparation for a future housing project, officials in Gran-Terre, Guadeloupe, asked government researchers to comb the site for anything historically significant that could be erased. Although finding salvageable remains in the acidic soil of the volcanic region was unlikely, the National Institute for Preventative Archaeology Research (INRAP) found 113 pre-Columbian graves.

This staggering excavation officially marks the largest batch of ancient skeletons ever found in Guadeloupe, according to Ancient Origins. Experts have identified the bones of children and adults, and dated them to the Late Ceramic Age, between 11th and 13th centuries. Most incredible, however, is that they were found at all.

An overseas department of France, Guadeloupe is a string of six Caribbean islands with extremely acidic soil, stemming from volcanic activity. This has left regional experts with few ancient remains to study, as any bones this old have typically long decayed. These particular burials, however, seemed to have averted as much.

“The bodies were buried up on themselves: the arms often bent, on the abdomen or thorax, the legs compressed on the forearms, elbows or thorax,” the institute explained. “Ties or bags guarantee this position. Manipulations after burial are noticeable.” 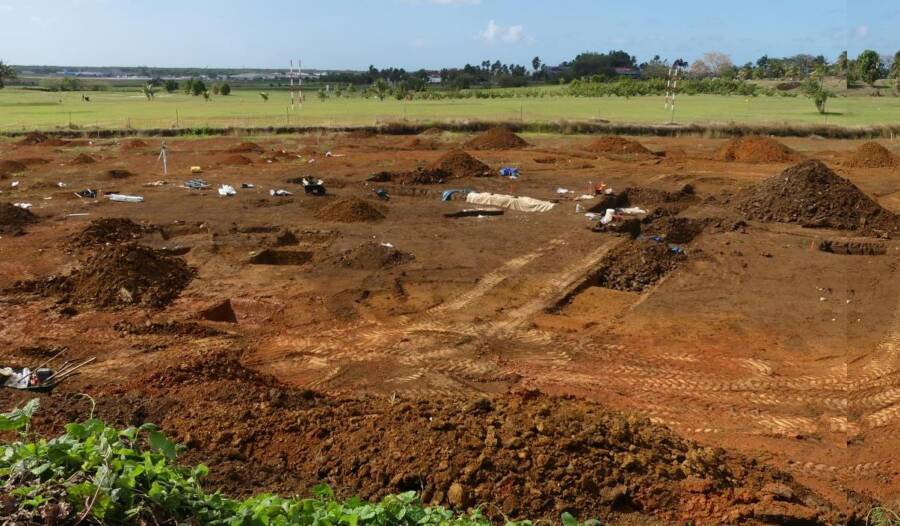 INRAPThe historic site in question, nearly constructed over — were it not for government officials requesting INRAP’s services.

This layering of limbs, fortunately, prevented the soil from eroding the remains. Hundreds of post holes from former structures, and more than 50 pits of pottery, tools, and animal remains were also found. Most exciting is what this will tell us about the local pre-Columbian Indigenous, as few sites like it have ever been found.

The historic find began with officials of Guadeloupe’s most populated island, Gran-Terre, being overly careful. They didn’t want an upcoming housing project near the island’s largest city of Les Abymes to destroy any potentially invaluable artifacts in the ground. INRAP gladly heeded the call and uncovered the remarkable results.

“A few hundred post holes correspond to habitat structures and around 50 pits are linked to domestic activities,” said INRAP. “The filling of certain pits yielded numerous shards of pottery, stone tools, heated blocks, the bones of rodents, reptiles, birds and the remains of crabs and shells, rejected after consumption.” 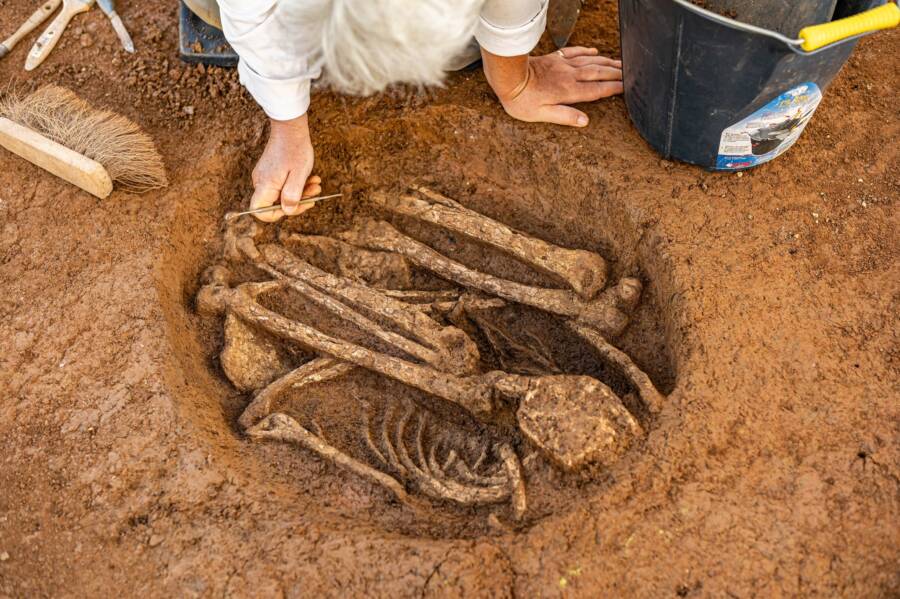 INRAPBurial No. 60, positioned with contorted and layered limbs that fortuitously prevented the acidic soil from eroding the bones.

While the discovery of these burials is remarkable on its own and “a figure hitherto unparalleled in Guadeloupe,” researchers hope the remains will help them study the Late Ceramic Age in more depth — through DNA analysis.

Named after a distinctive form of pottery common between 750 and 1500 A.D., the period saw the Arawak people occupy the Lesser Antilles. This region, which includes the archipelago of Guadeloupe, saw two distinct groups of Arawak thrive: one in South American and another in the Caribbean islands.

That latter group is commonly referred to as the Taino. They were peaceful agriculturalists who hunted and fished together, sharing their bounty, and settling in small villages. Tragically, this was the first culture that Christopher Columbus encountered — and slaughtered — when he arrived in the Caribbean in 1492. 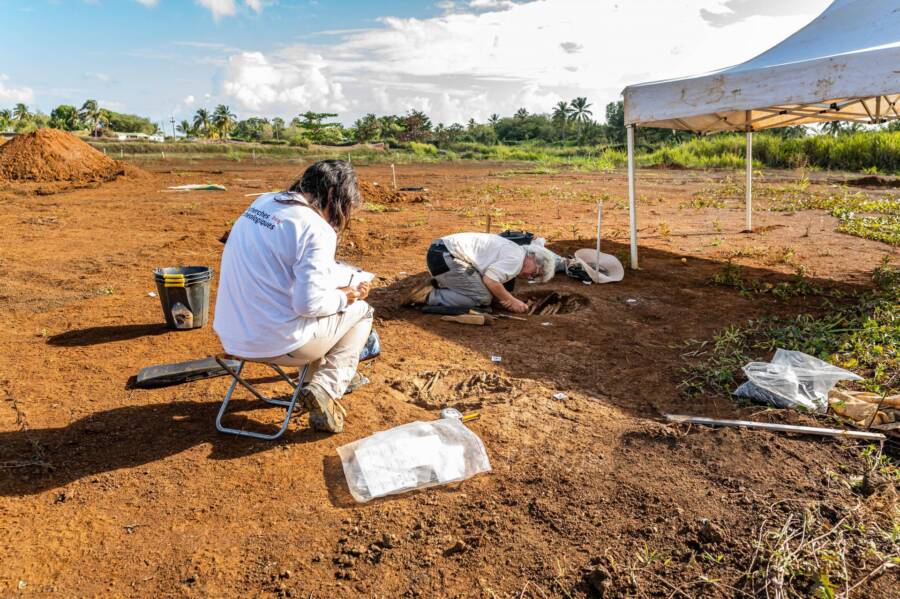 With Taino history extinguished and the very soil eradicating most traces for modern man to study, the find in Guadeloupe has given experts new hope to learn more. While the Taino left behind some enlightening rock art, finding actual bones allows experts to create genetic maps of these people through DNA analysis.

Their hope is to extract DNA that is actually readable. Since the skeletal remains were found intact and well preserved for their age, that goal is fairly viable. If successful, experts will be able to connect the individuals buried to their relatives or common ancestors, thereby understanding their burial culture better.

Genetic maps would also help researchers find connections between those Taino who were slaughtered and the few survivors who emigrated elsewhere. As a result, historians would have a far greater understanding of ancient migration patterns in the region — and unprecedented insights into our past. 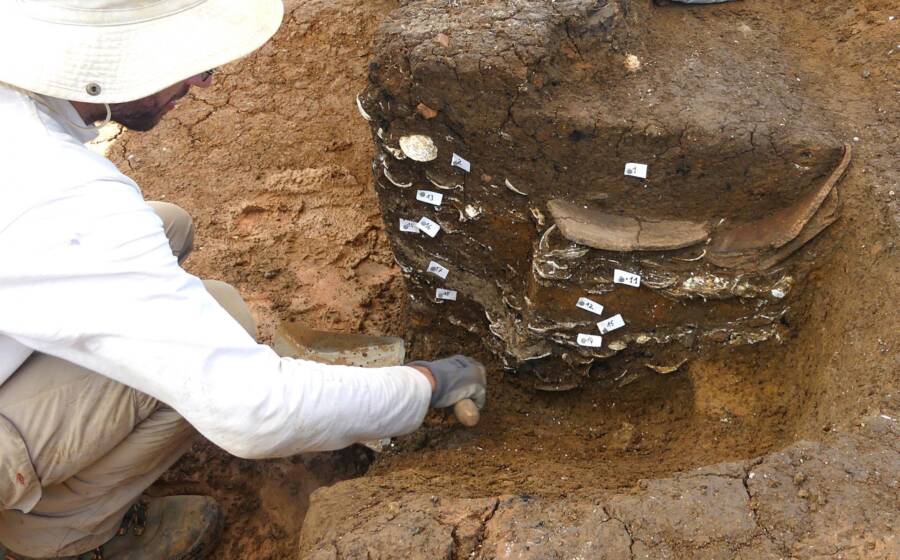 INRAPOne of the many pits uncovered at the dig site.

While that particular find would have taken the proverbial cake on any other day, insight into the lost Taino civilization has understandably dominated the current conversation.

After reading about the 113 ancient Taino graves unearthed in Guadeloupe, find out who discovered America. Then, learn about human sacrifice among Indigenous Americans.