The Majestic History And Mysterious Destruction Of The Temple Of Zeus

Built in the fifth century B.C., the Temple of Zeus at Olympia once housed one of the Seven Wonders of the Ancient World. But it wouldn’t last forever. 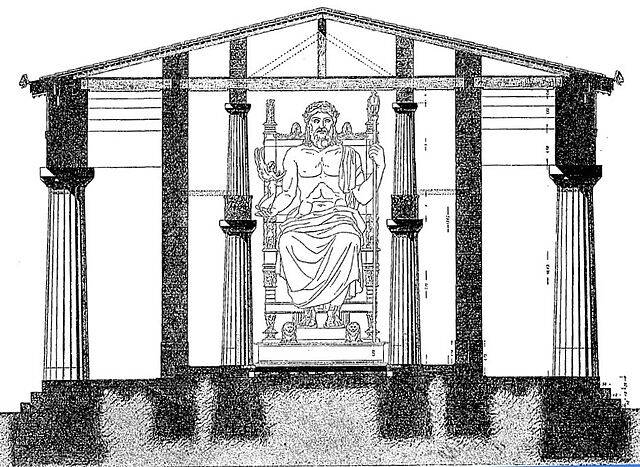 Wikimedia CommonsThe temple once housed the legendary Statue of Zeus, one of the Seven Wonders of the Ancient World.

The Temple of Zeus was considered a marvel of the ancient Greek world. For centuries, it stood atop a mountain overlooking the city of Olympia, a testament to the might of the Greek gods of antiquity. Built in the second quarter of the fifth century B.C., the Temple of Zeus was the paragon of a building made in the Doric order of Grecian style, and was laden with the finest artwork, marble, and craftsmanship.

Its destruction marked the end of an era — literally — as the Holy Roman Empire rose to power in its place. Pagan rituals were replaced with the earliest forms of Christianity, and today, little but rubble remains in its stead.

For many years, archaeologists believed that the temple was sacked by Theodosius the Younger in 426 A.D. as part of the Roman emperor’s rise to power in what would become the Holy Roman Empire. But the discoveries in recent years suggest that history has a different story altogether.

This is the true story of the once-mighty Temple of Zeus — and what really happened to it.

The Temple of Zeus Was A ‘Sacred Grove’ 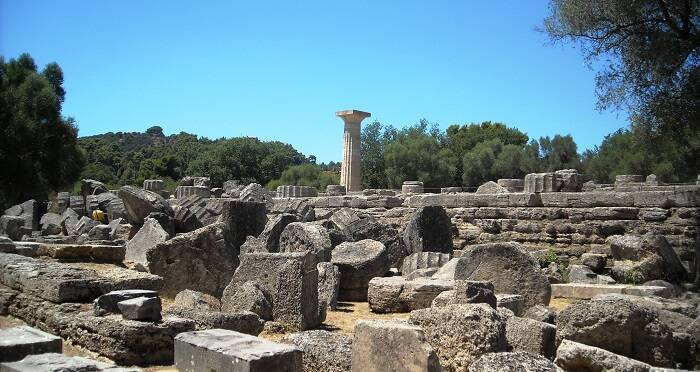 Wikimedia CommonsThe Temple of Zeus in 2010

The Temple of Zeus was a marvel to behold in its time. The sacred sanctuary that the mammoth structure would be built around was laid down in either the tenth or the ninth century B.C., during what was known as Greece’s “Dark Age.” At that time, the followers of Zeus joined with the followers of Hera to create a monolithic polytheist religion that would go on to form the backbone of the Grecian pantheon of gods and goddesses. Ultimately, the legendary temple took its final form in 456 B.C.

And the structure in its prime was, indeed, a sight to behold. Guests were treated to opulent gold shields in commemoration of the Spartan victory at Tanagra, which led into a massive temple built in the peripteral hexastyle with 13 columns at the sides. Its design was conceived by the famed architect of antiquity, Libon of Elis, and was laden with Hellenistic mosaics of various Grecian gods and goddesses — including, of course, Zeus himself — crafted in the finest marble imported from Paros, in the Aegean Sea.

The Greek historian Pausanias paid a visit to the Temple of Zeus in the second century A.D., and had no shortage of compliments for the handiwork of his countrymen. In his book, Description of Greece, he described the Temple of Zeus as a representation of the god, himself, on Earth.

“Many are the sights to be seen in Greece, and many are the wonders to be heard; but on nothing does Heaven bestow more care than on the Eleusinian rites and the Olympic games,” he wrote. “The sacred grove of Zeus has been called from of old Altis, a corruption of the word ‘alsos,’ which means a grove.”

The ancient Greek poet Pindar also referred to the temple as “Altis.”

Theories Of What Happened To The Temple Of Zeus

For centuries, historians believed that the Temple of Zeus was the victim of sacking by the Roman emperor Theodosius the Younger (Theodosius II). Theodosius had the distinction of being the youngest Augustus (emperor) in ancient Roman history — and he was also the first to embrace early versions of Christianity.

Driven by the need to conquer the ancient world with the teachings of Jesus Christ, Theodosius the Younger reportedly ordered the temple to be burned to the ground in 426 A.D.

And while most historians generally agree that Theodosius the Younger did some damage to the Temple of Zeus, there’s some question as to whether he was wholly responsible for its destruction. Some historians postulated that the temple may have been “pulled down by ropes during the Byzantine period.” Other historians believed that the temple was abandoned in the sixth century when the Kladeos river flooded and forced the residents to escape.

But in the 18th century, everything historians believed about the Temple of Zeus would change. 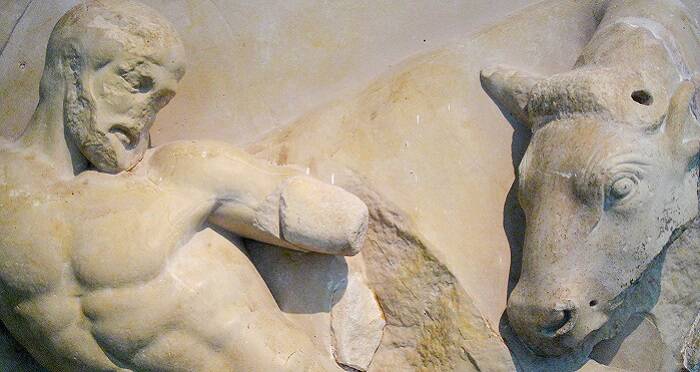 Wikimedia CommonsA metope from the Temple of Zeus at Olympia, in the Archaeological Museum of Olympia, Greece

The ancient sanctuary of Olympia was first identified by British antiquarian Sir Richard Chandler in 1766. By that time, the Temple of Zeus had long been forgotten, for the most part, and the temple wouldn’t be excavated until 1829 when a French team led by Léon-Jean-Joseph Dubois and Abel Blouet partially excavated the temple for the first time. Blouet and Dubois took their findings to the Louvre, where they remain to this day.

In 1875, the German Archaeological Institute began leading systemic excavations of the site, and these excavations continued on and off to the present day. The most notable finding was in 1890, when the German archaeologist Karl Humann unearthed fragments of the temple in the Grecian city of Magnesia. But in September 2021, another notable discovery promised to yield all the answers that the temple was hiding underneath a mass of alluvial deposits.

According to Smithsonian Magazine, Görkem Kökdemir — an archaeologist from Ankara University in Turkey — uncovered a sanctuary, a stadium, a theater, 80 statues and other artifacts. But his biggest find was the entrance gate to the Temple of Zeus.

“We think that the temple we found in this area is a well-known temple in the history of architecture just like the Temple of Artemis, which is the fourth largest temple in Anatolia and also located in Magnesia,” he said, adding that while it would take another 15 to 20 years to fully excavate the temple, “the eyes of the world’s archaeology community will be here.”

These discoveries proved added credence to what was originally proposed by archaeologists in 2014: that the temple itself wasn’t fully sacked by a power-hungry Roman emperor, or by ropes of the early Byzantine period. Rather, the Temple of Zeus was very likely destroyed by an earthquake or earthquakes, and later lost to time under layers of silt. The stunning monument to the king of the gods was destroyed by an act of god.