The Little-Known History Of Bohemian Grove, The Summer Camp For The ‘Masters Of The Universe’

A private campground in Monte Rio, California, Bohemian Grove hosts an all-male social club of rich and powerful members who want to "misbehave." 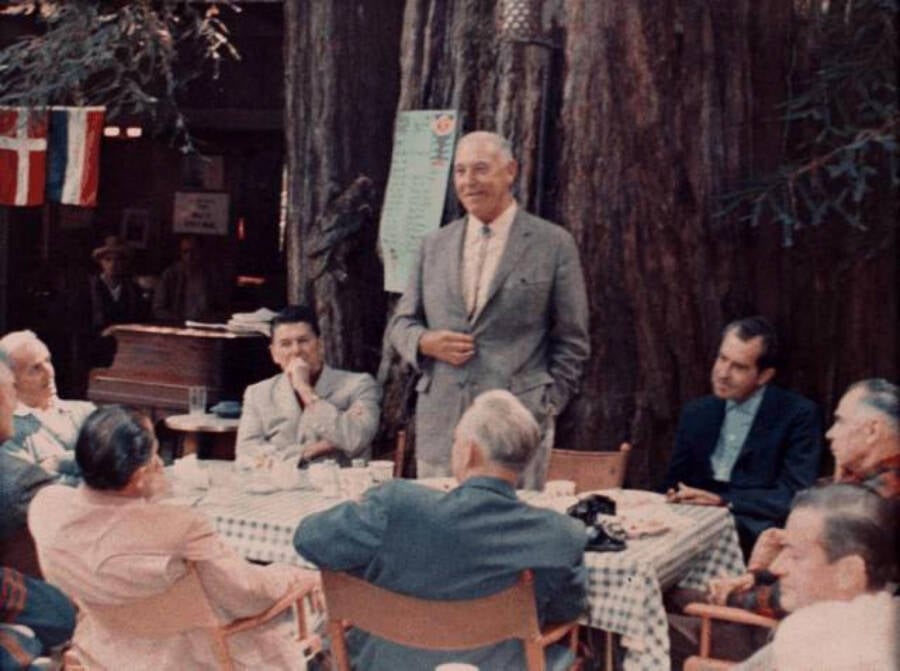 Every July, rich and powerful men flock to the woods of Monte Rio, California. There, among the redwood trees, members of the mysterious Bohemian Grove club attend talks, gather for elaborate ceremonies, indulge in booze, and let loose away from prying eyes.

Shrouded in secrecy, this exclusive, all-male club has counted presidents, industrialists, authors, and actors among its ranks. Though members of the club are encouraged not to work while they’re at Bohemian Grove, the annual summer meeting has produced various political compromises as well as crucial discussions about the Manhattan Project.

Go inside the hidden story of Bohemian Grove, the elite “gentlemen’s club” so exclusive that the waitlist to join is decades long.

What Is The Bohemian Grove?

Though Bohemian Grove is known as a gathering spot for the nation’s power players today, it has more — well — bohemian origins. In 1872, a group of San Francisco artists, lawyers, and journalists began to gather in the California redwoods to indulge in their shared love of the arts.

These art lovers soon decided to expand their membership to include “money as well as brains.” But within a couple of years, Bohemian Grove became an elite institution — with many of its “bohemians” pushed out. 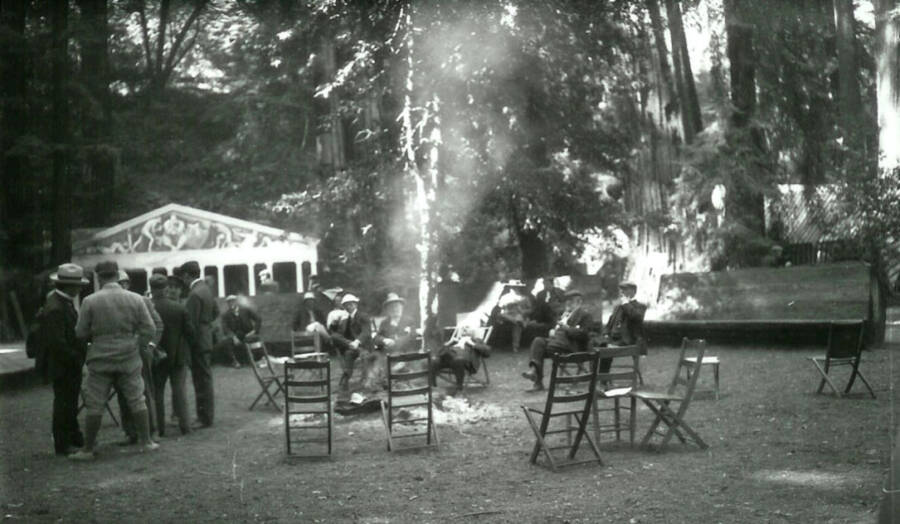 Wikimedia CommonsA photo of the Bohemian Grove club, taken by Jack London. Circa 1911-1916.

Having bought up 2,700 acres of redwood forests for the Bohemian Grove campground, wealthy members decided to recruit artisans to boost their “bohemian” credentials. Mark Twain became an honorary member, and even socialist writer Jack London was accepted into the Bohemian Grove club.

But money ultimately won in the end. The members of the club today are all wealthy and influential people — and only men are allowed to join.

Today, the Bohemian Grove serves as a getaway for members to reconnect with each other and to let loose. The club’s motto is “weaving spiders, come not here,” a line from William Shakespeare’s A Midsummer Night’s Dream. It means that members aren’t supposed to work while at Bohemian Grove.

However, there have been notable exceptions, including planning for the Manhattan Project in 1942, which led to the creation of the atomic bomb. But considering how many well-known policymakers have been members of the Bohemian Grove club, this isn’t entirely surprising. 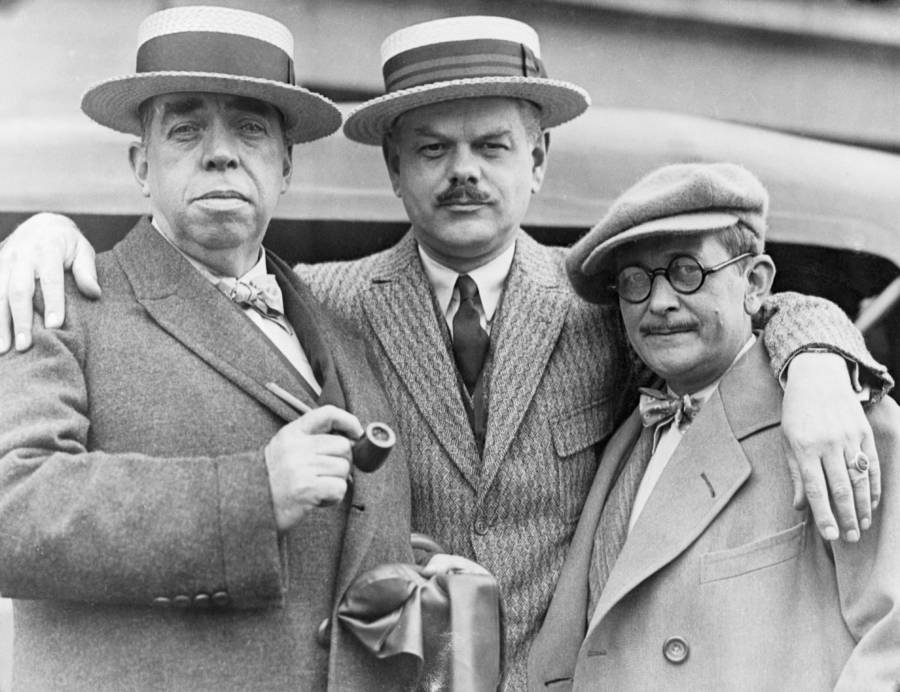 Bettmann/Getty ImagesAuthors Irvin S. Cobb and Charles Norris and editor Ray Long of Cosmopolitan were all members of Bohemian Grove.

Though membership guidelines don’t explicitly require a seven-figure bank account, the membership fees would be hard to pay without one. The initial joining fee alone is $25,000, and members must also pay yearly fees.

This is all assuming you can even get in the 2,500-member club, of course. New members must be recommended by several current ones.

One former guest told All That’s Interesting that the average time on the waitlist for the club is usually between 20 and 30 years, though it’s “faster if you play an instrument.” In 1989, the waitlist was 33 years long.

So, what exactly happens at the Bohemian Grove once you get in?

Inside The Real Bohemian Grove

“It’s honestly just a place where wealthy guys from San Francisco go to be drunk knuckleheads,” said the former Bohemian Grove guest. He added, “The overriding agenda is to get so wasted every day that any reasonable person would immediately call 911 to get help.”

The campground’s setting is perfect for that sort of thing.

“It’s very rustic,” he said of Bohemian Grove. “There are scores of ‘camps’ within the grove, each with 20 to 50 people. Each camp is unique and has a different cabin or clubhouse. They are all along a main dirt road.” (As of 2007, the site had some 118 of these camps.)

The guest added, “They burn firewood to stay warm and generally just host people from other camps or go visit people at other camps and provide entertainment. A portion of the membership is dedicated to actual professional musicians, actors, artists, et cetera, so there’s great entertainment.” 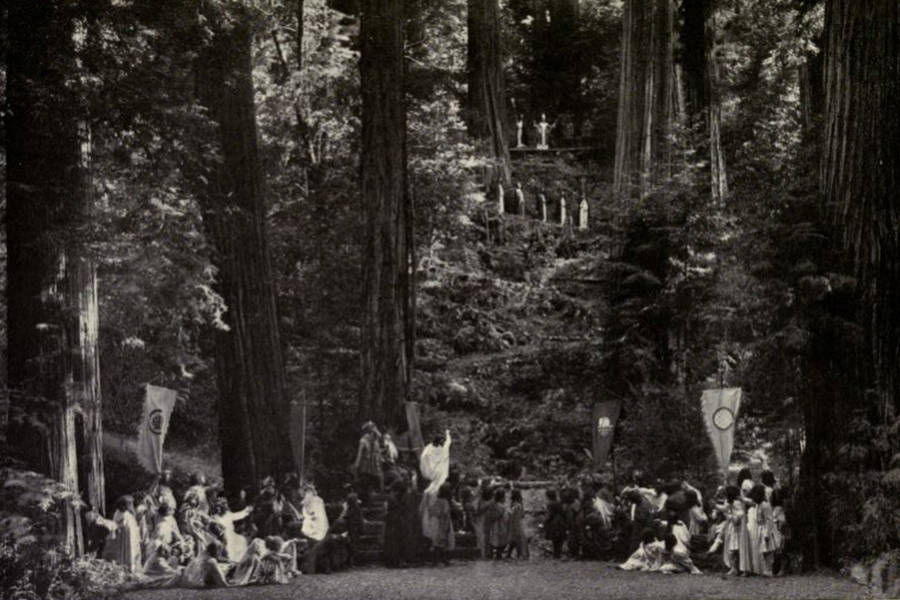 Wikimedia CommonsA rehearsal of St. Patrick at Tara at Bohemian Grove. The final performance was for members only.

Al Jardine, a co-founder, guitarist, and occasional lead singer of the Beach Boys, has been known to play at Bohemian Grove. Sometimes members will get together and put on performances of Shakespeare’s plays, or hire troupes to perform for them. And due to Bohemian Grove’s intimate setting, members often get to meet and mingle with the special guests.

But of course, it’s not all fun and games at the campground. Though Bohemian Grove actively discourages members from mixing business with pleasure, world-changing events have been known to occur on the grounds — and not just discussions about the Manhattan Project.

In 1967, club member Richard Nixon gave a speech on American foreign policy, which he called the “first milestone on my road to the presidency.” He also struck a deal with fellow member Ronald Reagan, in which Reagan promised not to challenge Nixon during the upcoming primaries.

Bohemian Grove members can also participate in unusual ceremonies, like the Cremation of the Care, which involves members cremating a coffin effigy before a 40-foot concrete owl. This has been described as “a traditional musical drama celebrating nature and springtime” by a spokesperson — but some suspicious outsiders believe there’s more to the story.

Conspiracy Theories About The Secret Club

As with any elite club, rumors about the Bohemian Grove have abounded throughout the years. Guarded by a sophisticated security team and hidden by 200-foot-tall trees, the Bohemian Grove club has been notoriously tight-lipped about its inner workings for decades. This has led some to speculate that it’s not just a summer camp for the wealthy — and that it might actually be a secret society full of Illuminati members or occultists.

More than one journalist has made it their mission to report on the mysterious club’s inner secrets. In 1989, Spy Magazine writer Philip Weiss pretended to be a guest at Bohemian Grove. He later wrote an exposé called “Masters of the Universe Go to Camp: Inside Bohemian Grove.”

“You know you are inside the Bohemian Grove when you come down a trail in the woods and hear piano music from amid a group of tents and then round a bend to see a man with a beer in one hand… urinating into the bushes,” Weiss wrote. “This is the most gloried-in ritual of the encampment, the freedom of powerful men to pee wherever they like.” 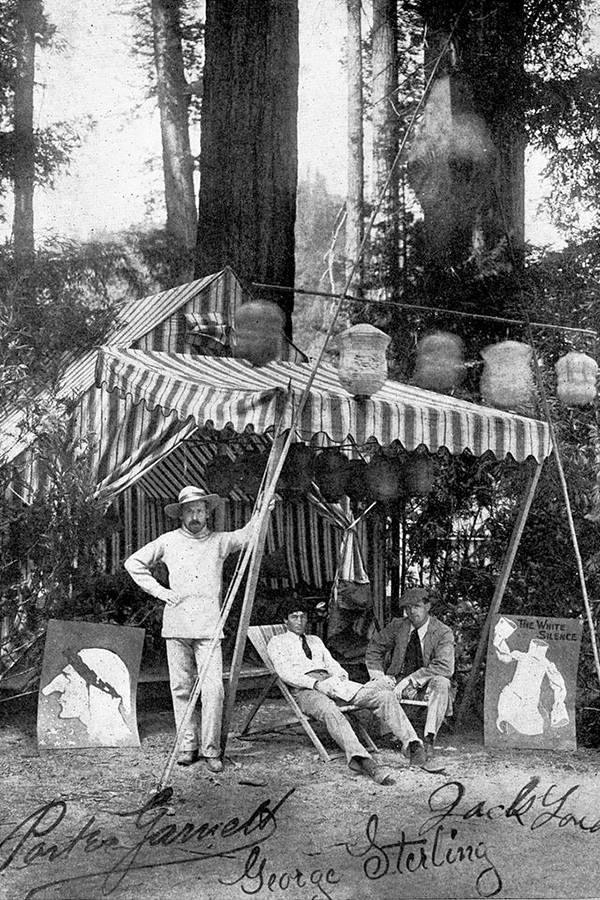 Wikimedia CommonsPorter Garnett, George Sterling, and Jack London sit under a tent in the Bohemian Grove.

More recently, in 2009, Vanity Fair writer Alex Shoumatoff was arrested for trespassing after pushing through a hole in a fence to investigate the compound. He documented his experience in a piece for the magazine.

But regardless of the conspiracy theories or rituals or debauchery that these investigators claimed they witnessed, former members and guests are quick to let people know that the club is mostly for relaxation, a reprieve from the stresses of the world of the rich and influential.

“I don’t buy the conspiracy stuff,” one former guest said. “Those theories are just a product of the fact that many of the members are wealthy and powerful and there are no phones allowed, so people let their imaginations run wild. I know a number of members and none of them are Illuminati.”

Still, the Bohemian Grove is bound to continue to fascinate for years to come. Tucked deep in the California woods, this shadowy social club for the rich and powerful remains a hazy and intriguing secret.

After reading about Bohemian Grove, check out other secret societies that some say rule the world. Then, learn about the Skull and Bones Society.