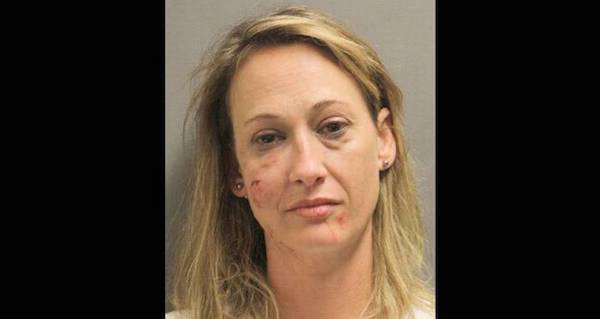 KTRKCollins was charged with assault and released on bond.

A woman in Texas wasn’t happy when a friend of a friend refused to give her cigarettes and alcohol. According to police, the 41-year-old woman bit off and ate a large piece of the acquaintance’s nose in retaliation.

Jessica Collins was temporarily staying with the next-door-neighbor of a woman who is only being referred to as “Tatiana” in Spring, Texas – a suburb of Houston.

On July 11, the three women went to a local bar together. After returning home for the night, Collins demanded more cigarettes and alcohol. When Tatiana said no and told both women to leave her home, Collins lost it.

In the bloodied attack, Collins allegedly pulled Tatiana to the ground by her hair, then bit off a chunk of her nose. And then swallowed it.

Collins was arrested and charged with assault-bodily injury.

“All I could remember was the taste of blood in my mouth,” Tatiana told ABC13.

The 28-year-old victim said she passed out several times and didn’t realize her nose was injured until she was in the ambulance on the way to the hospital.

“I didn’t have time to react, to push her away,” Tatiana said, adding, “I think I was trying to fight back, but I couldn’t.”

Doctors told Tatiana that she needs plastic surgery within two weeks or the procedure will become more complicated because the skin will begin to heal. Tatiana is now facing expensive medical bills because she doesn’t have health insurance.

A friend of the victim started an online fundraiser on GoFundMe to raise money for the reconstructive surgery. Titled “Assault Victim Needs A Nose,” the description reads, “My friend was attacked by a mentally unstable person last week, when me friend asked her to leave her property, instead of leaving, the lady lunged at my friend, biting off her nose and swallowing it.”

The campaign, accompanied by a gory up-close photo of the victim’s face, is asking for $12,000 dollars.

On July 16, Collins was released on bond.

As for the victim, she told Eyewitness News that she’s afraid to leave her bedroom. “It’s where I feel safe,” she said.

“I’ve seen a lot. I’ve seen other parts bit off. I mean, it does happen,” said Harris County Constable Mark Herman. “This case here is probably the first we’ve had in probably four or five years, but it does happen.”

Next, read about the woman who bit off a piece of a Chinese restaurant owner’s ear because she was unhappy with her order. Then read about artists who cannibalized themselves in a livestream.