The Story Behind “The Falling Man,” The Tragic Photo Of A 9/11 Jumper

Though some say the "Falling Man" photo of a 9/11 jumper may depict a man named Jonathan Briley, his true identity remains uncertain. 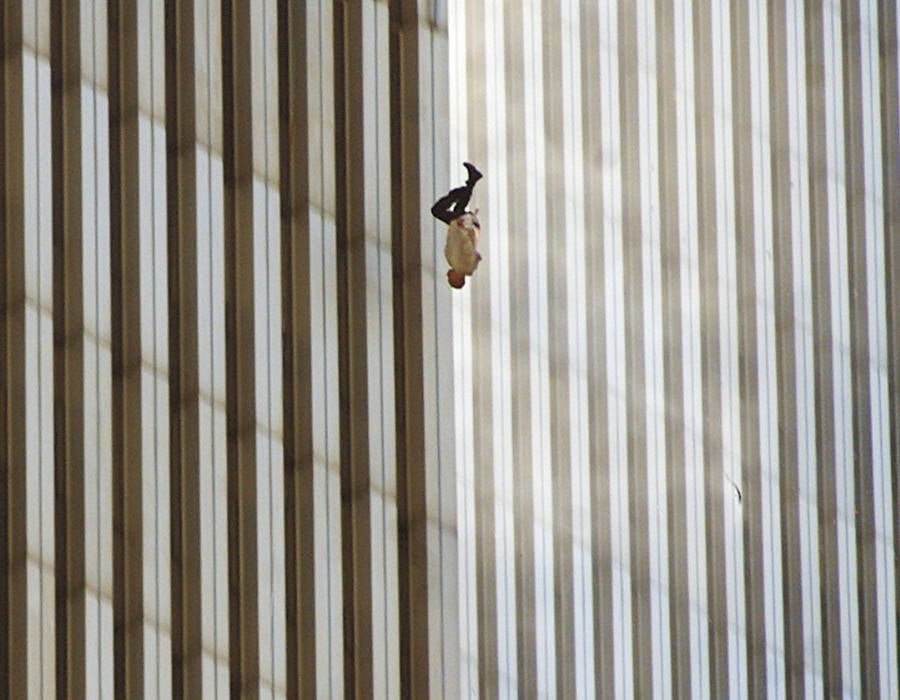 Just like that, American history changed forever. The images from that tragic day are as horrific as they are iconic: smoke trailing from the twin towers, people running in fear on the ground below, and, eventually, two holes in the iconic city skyline.

While those photos accurately portray the trauma and heartbreak felt by all that day, there are others that tell more personal stories. One of the most gut-wrenching was taken by photographer Richard Drew of the Associated Press shortly after the second tower was hit. Known as “The Falling Man,” the photo ran in newspapers around the world only once, but it left a lasting impact on all who saw it.

Of all the 9/11 jumpers who fell to their deaths that day, perhaps none has remained as haunting as “The Falling Man.” And though some believe he was a man named Jonathan Briley, the identity of this tragic figure remains uncertain to this day.

“A Quiet Photograph”: The Story Of “Falling Man”

“It’s a very quiet photograph,” Drew says about “The Falling Man.” “It’s not like a lot of other violent photographs from other disasters.”

Indeed, it is not. Other photos from 9/11 show flames, debris, and falling buildings, but “The Falling Man” shows the desperation of one man with no option but to leap from a skyscraper window. It also echoes the fate of the approximately 9/11 jumpers who chose to leap rather than to be trapped in the towers that day.

After the attacks, the New York City medical examiner’s office refused to call those who had jumped “jumpers.” That term had previously been used to define those who had planned to jump to their death, rather than those forced to by tragic circumstances. 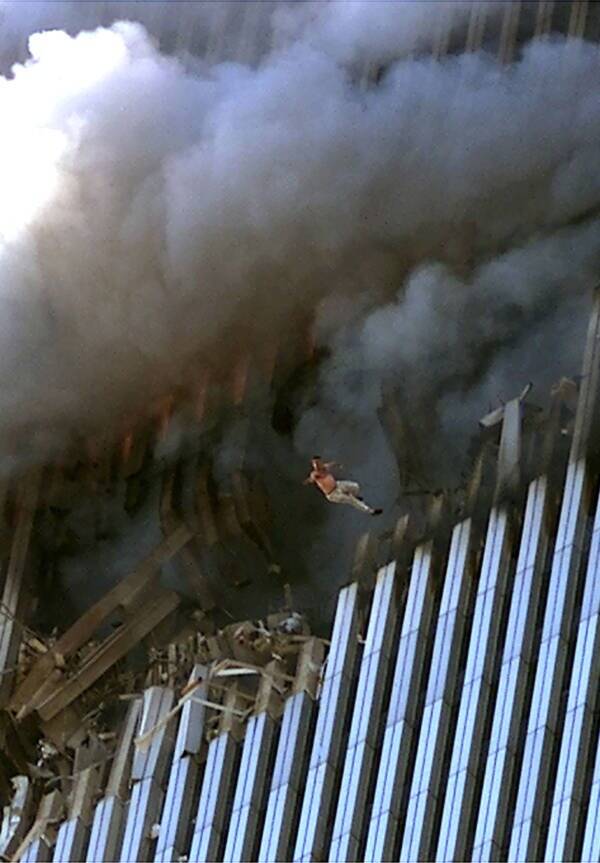 Drew saw many 9/11 jumpers that morning, a horrific sight for someone who had no idea what he was getting into. He recalled being told of the incident by a fellow photographer while working the first day of Fashion Week. Like many, Drew wasn’t aware of the seriousness of the attacks yet. He simply believed some kind of explosion had taken place. He soon received word that a plane had hit the towers, and he caught a train across town.

Drew remembered arriving by subway at the scene, coming up from the Chambers Street exit and watching helplessly as dozens of people began to fall from the top floors. His journalistic instincts immediately kicked in and he began to capture the chaos on film, snapping photos of those on the ground and in the air.

“I didn’t know I had that photograph of that man in that position until I actually saw it on my computer,” Drew said of “The Falling Man.” “I called one of our photo editors and I showed him the picture and I said ‘This is it, this has got to be the picture.'”

The photo editor agreed. The next day the photo appeared in dozens of publications across the country, including the New York Times. The backlash over the photo’s graphic nature was so severe that it wasn’t run again.

Was Jonathan Briley “The Falling Man”?

Richard Drew on his experience capturing ‘The Falling Man.’

Because the body was never recovered, there has never been any formal identification. Over the years theories popped up over his identity though none have been proven.

A reporter for the Canadian publication The Globe and Mail once claimed that the man was Norberto Hernandez, a pastry chef at Windows on the World, a cafe on the 106th floor of the North Tower. Initially, Hernandez’s family was inclined to agree, though they were less convinced after further inspection of his clothing in the photo. 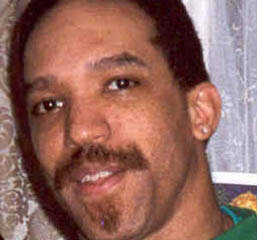 CNNJonathan Briley, the 9/11 victim who may be the man depicted in the “Falling Man” photo.

“When I first looked at the picture […] and I saw it was a man — tall, slim, I said, ‘If I didn’t know any better, that could be Jonathan,'” his sister Gwendolyn told The Sunday Mirror.

But although Jonathan Briley’s clothes and general description seems to match what we can see in the “Falling Man” photo, we can’t be sure. For one thing, those close to him weren’t positive what he wore to work that day. He left for work early that morning and kissed his wife goodbye while she was still asleep.

The Haunting Legacy Of The Unidentified 9/11 Jumper

Today, “The Falling Man” represents much more than just one man’s fate that day. It encapsulates all the 9/11 jumpers who chose to leap and has become an impetus for introspection for those who watched the tragedy from afar: given the choice, or perhaps lack thereof, what would you have done that day? 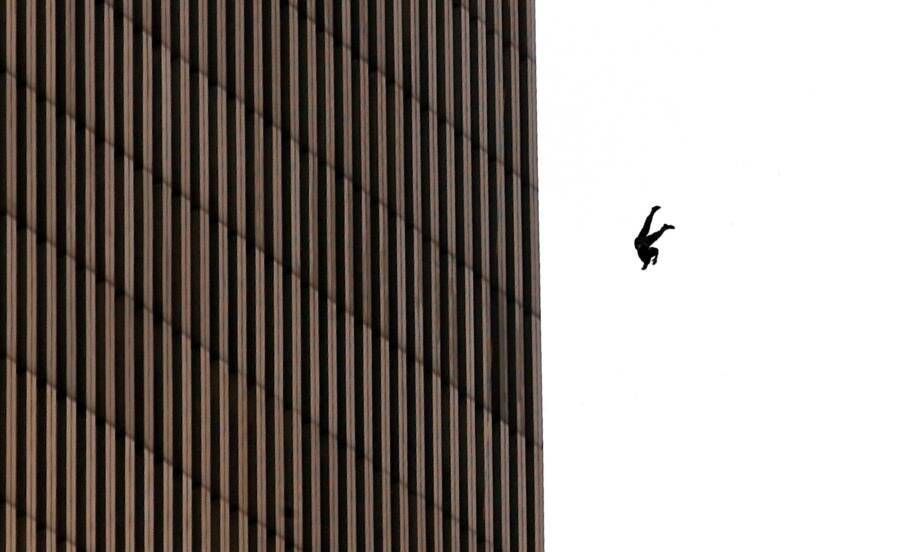 “I’ve never regretted taking that photograph. It’s one of the only photographs that shows someone dying that day,” Drew said, pointing out again that most photos reflect the destruction of the towers and not the pain of the people. “We have a terrorist attack on our own soil and we still don’t have pictures of people dying.”

Drew hopes that “The Falling Man” can now come out of the shadows after almost two decades. It’s no longer a gruesome shot of a single 9/11 jumper’s fate, but a quiet reminder, suspended in history, of the fate of dozens.

“I like to think of him as sort of the unknown soldier,” said Drew. “Let him represent everyone that had that fate that day.”

After learning about “The Falling Man” photo of a 9/11 jumper believed to be Jonathan Briley, read about some of the most popular 9/11 conspiracy theories. Then, see the most poignant artifacts from 9/11.