Washington Irving's famous tale The Legend of Sleepy Hollow and its iconic headless horseman were inspired by a mix of real history and spooky folklore.

Every year when the green leaves turn bright orange and pumpkins appear on our doorsteps, Washington Irving’s classic ghost story, The Legend Of Sleepy Hollow, is retold.

The beloved American legend follows the tale of Ichabod Crane, a superstitious schoolteacher who finds himself in the haunted town of Sleepy Hollow, where he suffers an ill-fated encounter with the village’s infamous headless horseman before he mysteriously disappears from the community for good.

“A drowsy, dreamy influence seems to hang over the land, and to pervade the very atmosphere… Certain it is, the place still continues under the sway of some witching power, that holds a spell over the mind of the good people, causing them to walk in a continual reverie.”

While the legend is a staple in American folklore, its inspiration is global. Indeed, Washington Irving’s haunting work is born out of a mixture of foreign lore, local history, and a bit of the uncanny. 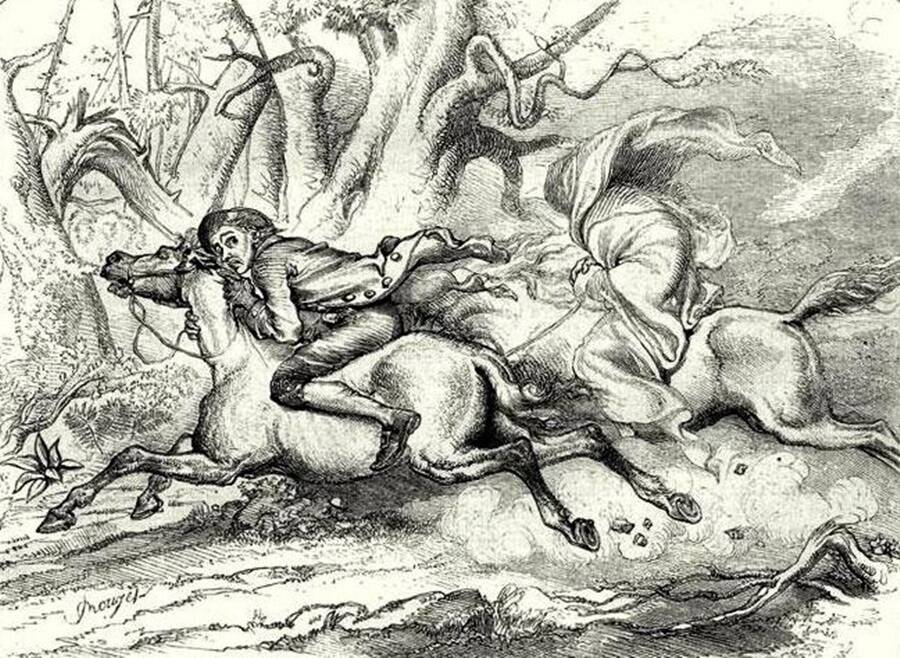 Wikimedia CommonsThe headless horseman’s origins can be found across various European lore, but Irving’s creature is likely inspired by a historical account of the American Revolution.

The myth of the headless horseman, like much folklore, is shared across cultures. There are iterations of a decapitated apparition on horseback in both Scandinavia and Northern Europe.

In Celtic tradition, for instance, there’s the legend of the dullahan, a headless demon who careens about on a black horse. In the Arthurian tale Sir Gawain and the Green Knight, too, a knight of Camelot beheads a green giant after being challenged, only to witness the creature ride off with its bleeding head in tow. 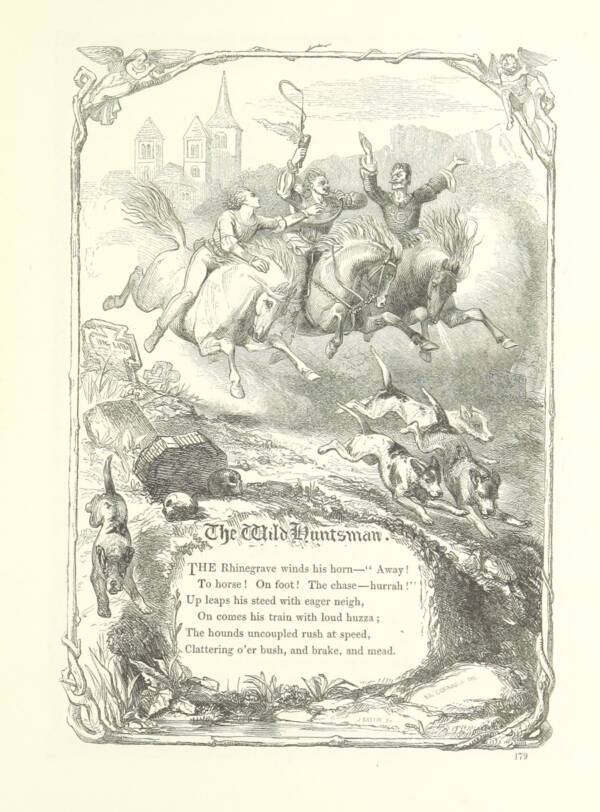 Most famous perhaps of this folklore are the tales of The Wild Huntsman or Der wilde Jäger by German poet Gottfried August Bürger and the German fairytales of writer Johann Karl Musäus, which depict ghostly riders as bad omens.

Well-read and well-bred Irving certainly would have been exposed to such tales, especially when he went on a European tour and subsequently wrote the collection of short stories The Sketch Book of Geoffrey Crayon, Gent., which included The Legend of Sleepy Hollow. 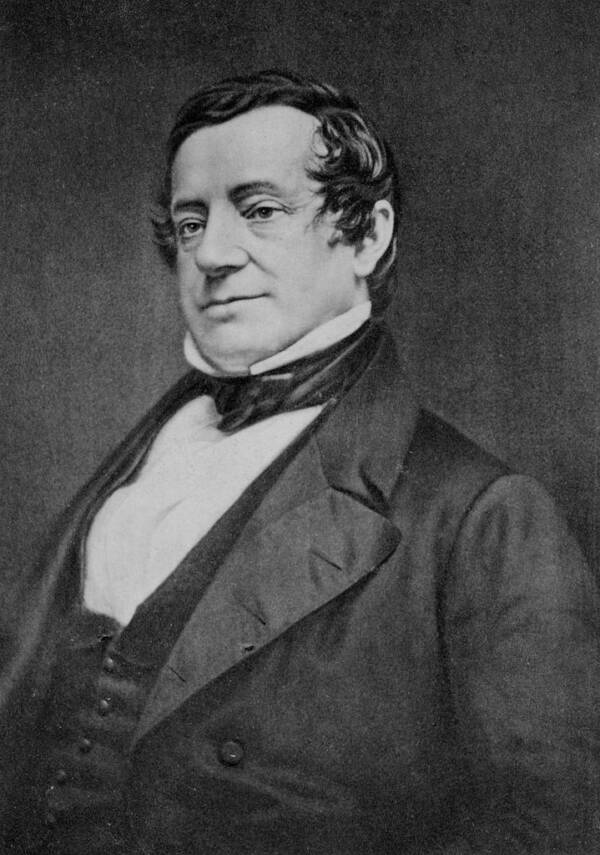 Wikimedia CommonsThe Legend of Sleepy Hollow is widely considered to be Washington Irving’s best work, and it catapulted him to international acclaim.

The American author, however, may have found his inspiration closer to home.

“Gigantic in height, and muffled in a cloak, Ichabod was horror-struck on perceiving that he was headless! But his horror was still more increased on observing that the head, which should have rested on his shoulders, was carried before him on the pommel of his saddle!”

A popular myth following the American Revolution was the story of the headless Hessian soldier. Hessians were German troops called upon to aid in Britain’s fight against the American colonists, and one particular Hessian was reportedly decapitated by a cannonball during the Battle of White Plains in 1776.

As the story goes, the corpse of the beheaded Hessian was buried soon after his death at the Old Dutch Church in Sleepy Hollow, near the small village of Tarrytown, New York. It was believed that the Hessian would arise at night in search of his head, and anyone who was ill-fated enough to come across his apparition was condemned to death. 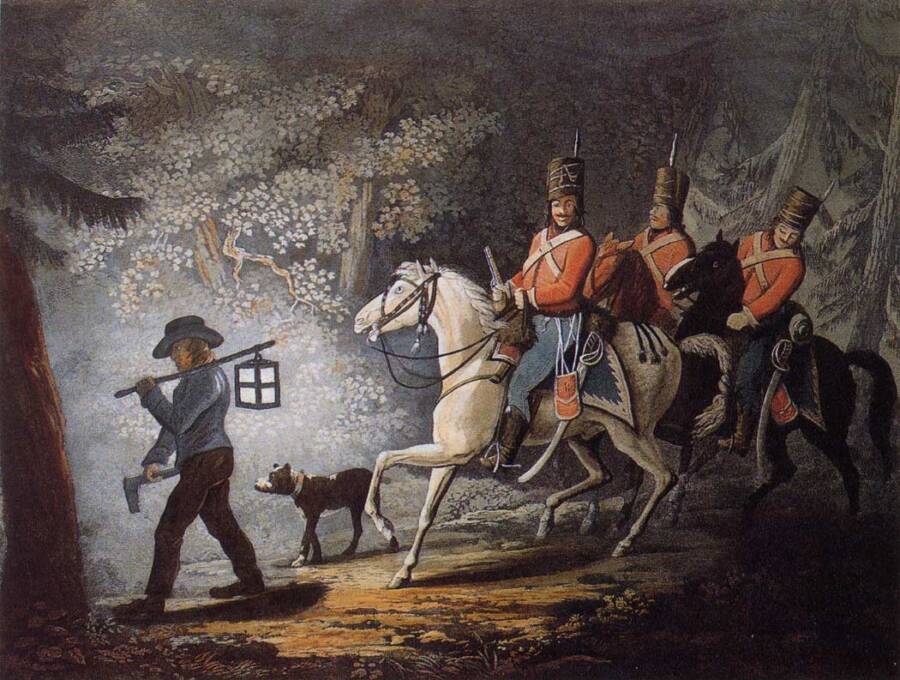 Wikimedia CommonsHessian soldiers were German troops who were called upon to aid British forces during the war.

While skeptics of the supernatural could argue against the existence of this headless horseman, historical records show, according to the New-York Historical Society, that there actually was a real decapitated Hessian soldier. In his 1798 memoir, Major General William Heath wrote: “A shot from the American cannon at this place [White Plains] took off the head of a Hessian artilleryman.”

Another soldier, Anthony Maxwell, is said to have witnessed the unfortunate death firsthand and talked about it for years after, according to the book Once Upon a Time in the American Revolution. 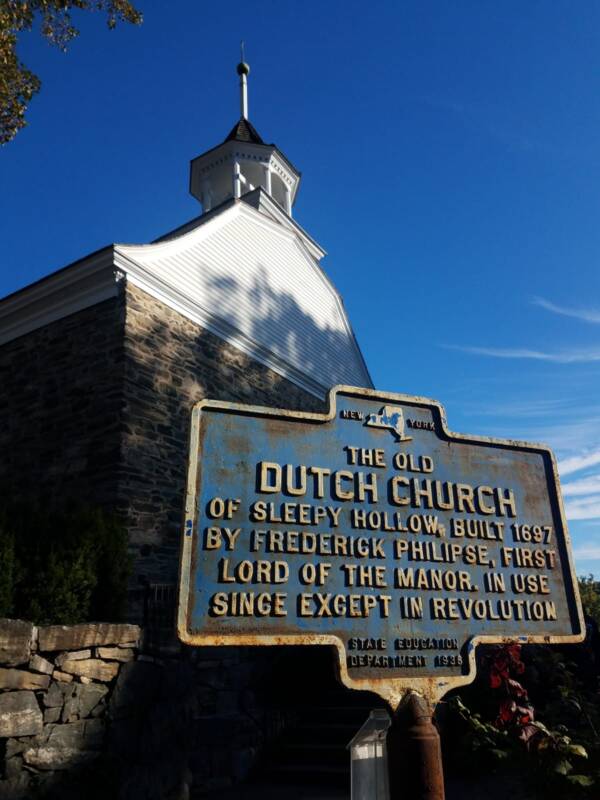 Alejandro AlvesThe Old Dutch Church where the headless Hessian fighter is said to have been buried.

The haunting tale of the headless Hessian soldier was well-known in the northeast. Coincidentally, about 10 miles from White Plains, New York, where the gruesome death is said to have happened, a teenage boy named Washington Irving was living with a friend in the small village of Tarrytown.

The Real People And Places Behind The Sleepy Hollow Legend

The true story of Sleepy Hollow can be traced to Washington Irving’s early years. At age 15, Irving left his native home of New York City and made his way north to Tarrytown, where his friend James Kirke Paulding lived. 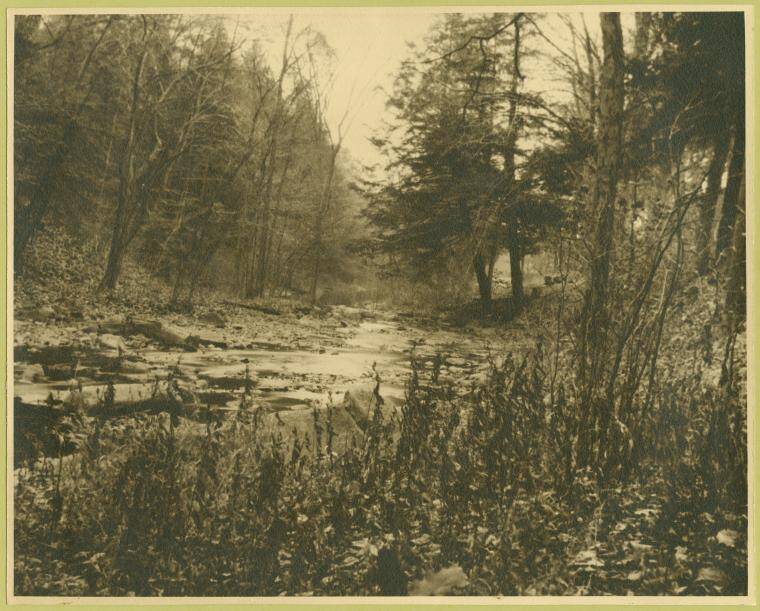 New York Public LibraryThe town of Sleepy Hollow, which was back in Irving’s time known as North Tarrytown.

But this wasn’t a regular house visit. Around that time in 1798, New York City was gripped by yellow fever that had made its way from Philadelphia, where the mosquito-borne disease had killed thousands.

Washington Irving’s family was among those wealthy enough to leave the city and find refuge elsewhere. They escaped to the fresh countryside of the Hudson Valley, where it’s clear from Irving’s writing that he adored the idyllic, pastoral setting and the eerie feelings inspired by its quaint colonial Dutch architecture. 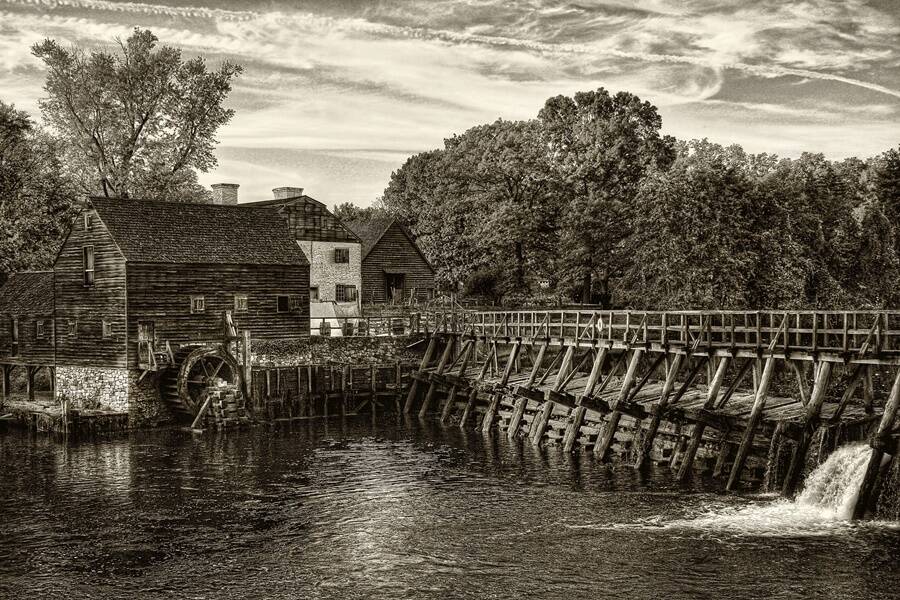 Daniel Mennerich/FlickrThe old Philipsburg Manor and bridge, said to be the inspiration behind the infamous chase scene in the tale of the headless horseman.

Irving was particularly mesmerized by the Catskill Mountains, which he described as having a “witching effect” on his imagination, according to his biography.

That infatuation greatly influenced Irving’s creation of The Legend of Sleepy Hollow in a number of ways. Besides having his fictional Sleepy Hollow village modeled off the real town of North Tarrytown in which he lived, the writer also enjoyed naming and loosely basing his characters on real people.

The protagonist in Irving’s Sleepy Hollow, Ichabod Crane, who “one might have mistaken… for… some scarecrow eloped from a cornfield,” is said to have been inspired by Jesse Merwin, a mutual friend the author shared with Martin van Buren, who later became America’s eighth president. Merwin was a teacher from upstate New York who had kept Irving company during his stay in Kinderhook in 1809. 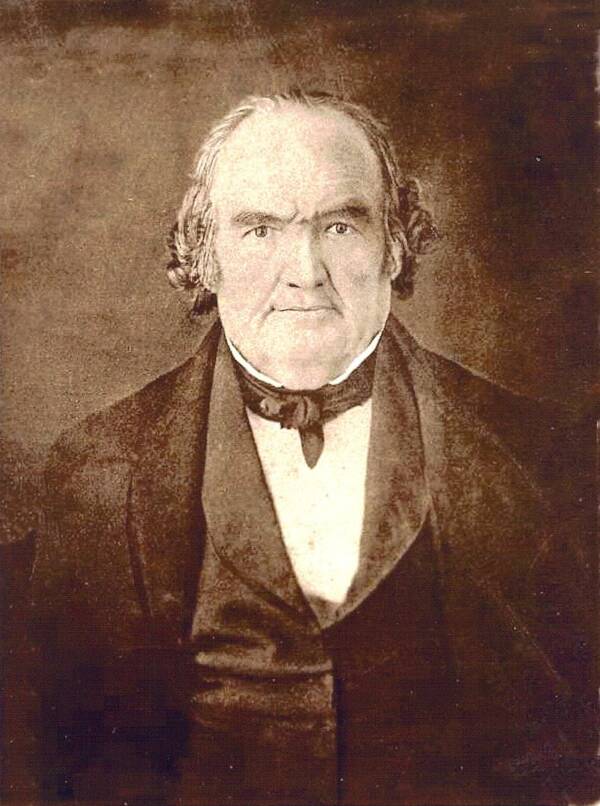 Wikimedia CommonsJesse Merwin, a schoolteacher and friend of Irving’s, is believed to be among the real people that inspired Ichabod Crane’s character.

Others claimed, as reported by The New York Times, that the bookish schoolteacher was inspired by Samuel Youngs, a lieutenant from Tarrytown who was friends with the Van Tassel family, who also inspired Irving and appear by name in the folktale. It’s likely that Ichabod Crane’s character was a composite of both of these men.

Katrina Van Tassel, meanwhile, Ichabod Crane’s unrequited love interest, was also presumably based on someone Irving knew personally. Described rather excessively by Irving as “plump as a partridge” and “ripe and melting and rosy-cheeked as one of her father’s peaches,” Van Tassel is believed to be loosely inspired by Eleanor Van Tassel Brush and perhaps by other women he’d known. 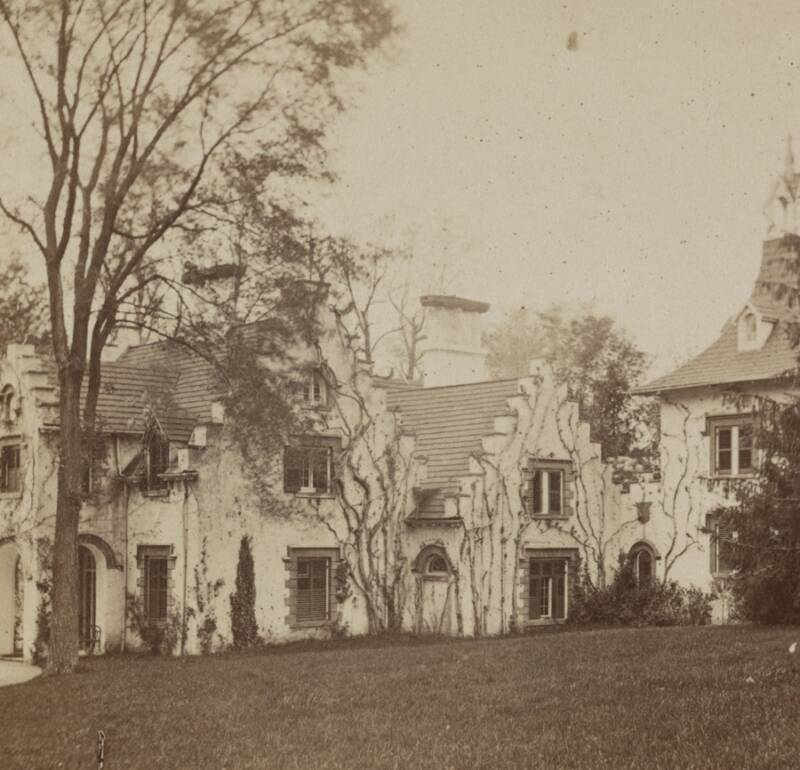 “In Washington Irving’s story, the Van Tassels have money, but it’s a story, based on several real people and a name taken from a gravestone,” Tara Van Tassell, a living descendant of the real-life Tarrytown family, told Westchester magazine.

There’s also a plague that riddles the little town in Irving’s book which is vaguely like the epidemic his family was forced to flee. All in all, fiction, history, and the mystical meld together in Washington Irving’s famous ghostly tale. 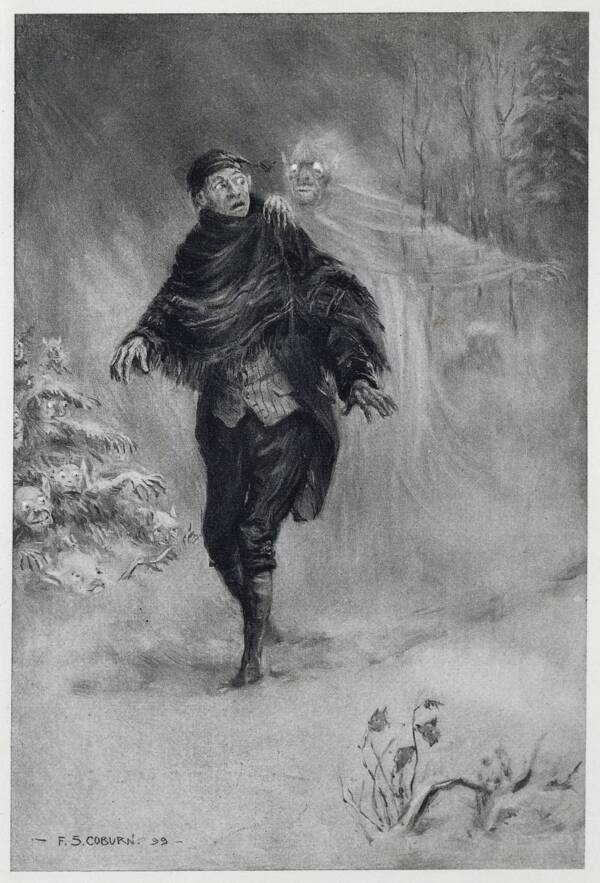 In 1817, Washington Irving’s family business went bankrupt following the British-American War of 1812. While Irving had a respectable reputation as a writer, there were no real job prospects left for him in America, so he left New York for Birmingham, England, where his sister Sarah and her husband Henry van Wart were already residing.

It was here that Irving, plagued by writer’s block since the unexpected success of his first book, A History of New-York from the Beginning of the World to the End of the Dutch Dynasty, years before, was struck with renewed inspiration to write.

A conversation with his brother-in-law had awakened in him old memories of his time in the Hudson Valley and with it Irving’s fascination with the community’s Dutch past and local lore. 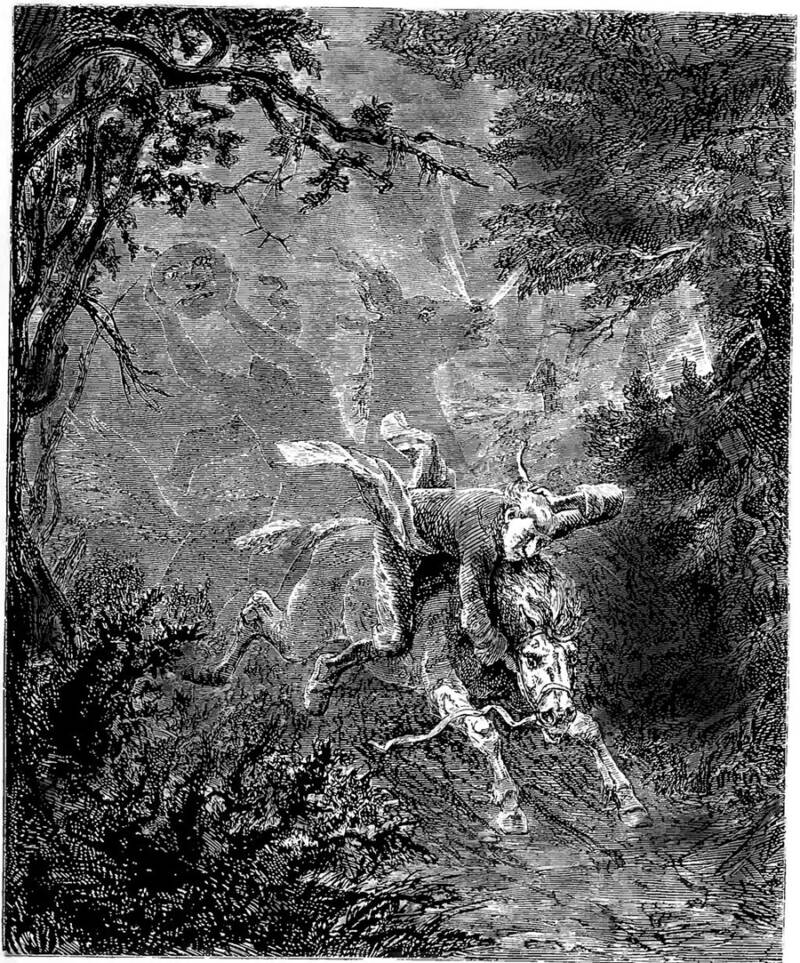 Wikimedia CommonsThe Legend Of Sleepy Hollow was published in the sixth installment of Irving’s critically-acclaimed collection of shorts, The Sketch Book.

Washington Irving spent all night writing his manuscript. His sister and brother-in-law, barely awakened and dressed for breakfast, were the first to hear the opening chapters of his collection of short stories that would later become known as The Sketch Book.

The collection of essays was issued serially throughout 1819 and 1820 under Irving’s preferred pseudonym, Geoffrey Crayon. Its later publication included the short story The Legend Of Sleepy Hollow. 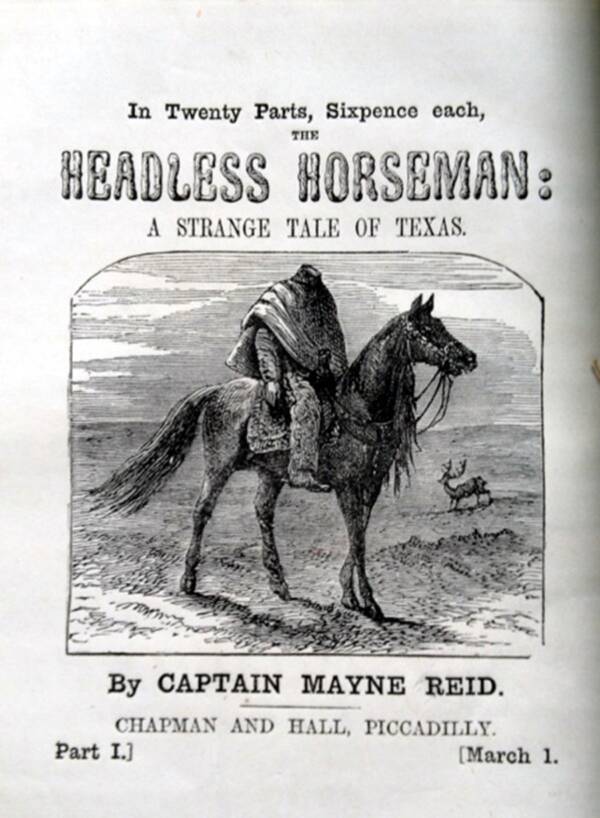 One of the first reviews for the book came from Irving’s former publishing colleague, Henry Brevoort, with whom Irving had shared a very intimate and complicated relationship over the years. But Brevoort’s anonymous review of the book, published in the local newspaper, respectfully outed Irving as the creative force behind the pen name Geoffrey Crayon:

“The freely-flowing vein of hearty and happy humor, and the fine-eyed spirit of observation, sustained by an enlightened understanding and regulated by a perception of fitness — a tact — wonderfully quick and sure, for which Mr. Irving has been heretofore so much distinguished, are all exhibited anew in the Sketch Book, with freshened beauty and added charms.”

The Sketch Book soon made its way to England’s literary base and received just as much praise. The book earned Irving the title of “the finest British writer produced by America.” Critics particularly enjoyed Irving’s elegant and humorous vernacular, and most agreed that the third story of the book’s sixth installment, The Legend Of Sleepy Hollow, was the collection’s crown jewel.

Modern Adaptations Of The Enduring Legend

Since it first caught the public’s attention in 1820, The Legend Of Sleepy Hollow continues to be one of the most enduring ghost stories in America. Like any influential piece of literature, its tale has been adapted repeatedly and brought to life in numerous ways, and it has even inspired the naming of several towns and villages across the U.S. 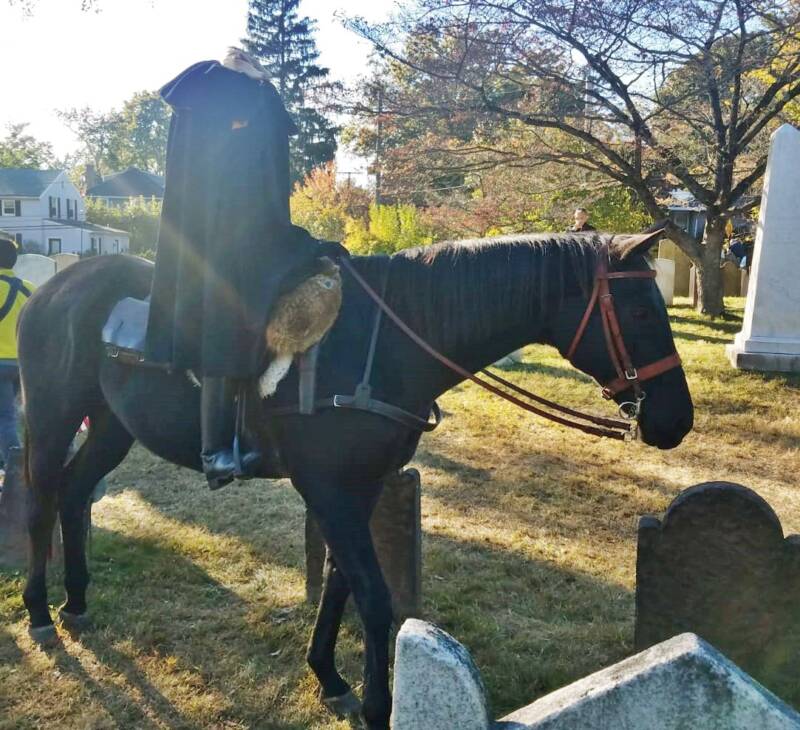 Its first-known on-screen adaptation was the 1922 silent film The Headless Horseman, and it has since been retold to viewers again and again.

One of the most popular iterations of Washington Irving’s famous horror story was 1999’s Sleepy Hollow, a film directed by Tim Burton. It starred A-lister Johnny Depp as Ichabod Crane, re-imagined as a skeptical police constable, and Christina Ricci as Crane’s love interest, Katrina Van Tassel.

Another modern adaptation was the 2013 FOX series Sleepy Hollow, which put an interesting twist on the classic tale by making the ghostly headless horseman one of the Four Horsemen of the Apocalypse and transporting the 19th-century characters into a modern time setting. 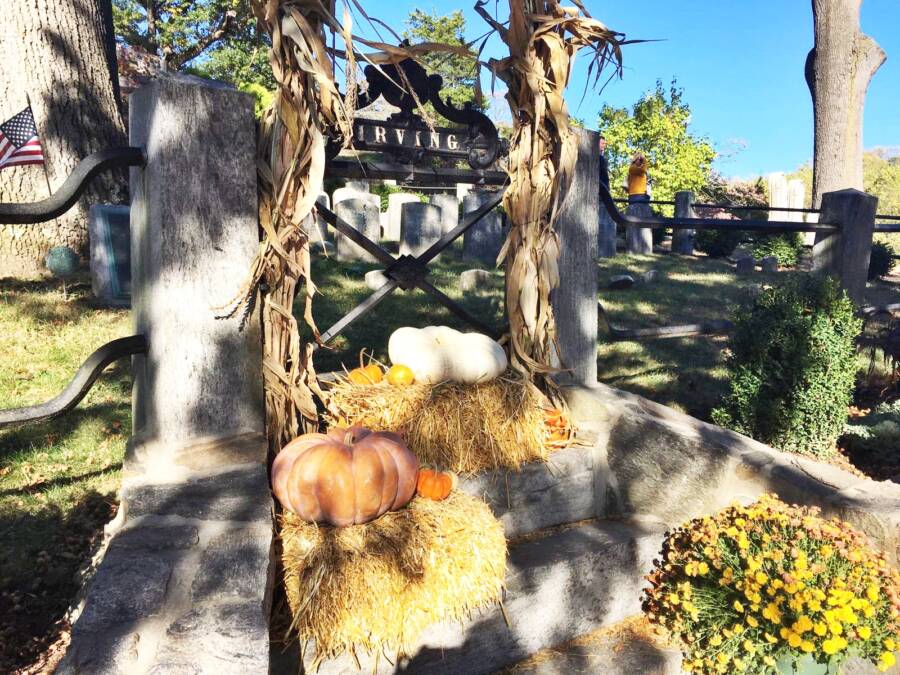 Alejandro AlvesWashington Irving died on Nov. 28, 1859, of a heart attack in Tarrytown. He’s buried in the Sleepy Hollow Cemetery, and his grave is decorated every Halloween.

No matter how many times it’s retold, The Legend Of Sleepy Hollow, with its unique formula of folklore, history, and mystique, remains a Halloween classic and reaffirms our appetite for the supernatural each and every year.

Now that you’ve learned about the true story behind The Legend Of Sleepy Hollow and how it became America’s most beloved ghost story, read about the legend of the real sword in the stone and the person it actually belonged to. Then, learn the true stories behind some of Hollywood’s greatest horror films.