West Sussex Record Office Add Mss 8981The copy of the Declaration of Independence discovered by Harvard researchers in England.

It has long been believed that the only handwritten parchment copy of the Declaration of Independence was the one that sits on display at the National Archives in Washington, D.C. However, an unexpected discovery made in a town in southern England has changed all that.

A report published at the Harvard Gazette and presented at Yale last week details the discovery of a second handwritten parchment copy of the Declaration of Independence found in the records office of Chichester, England.

In 2015, Harvard Declaration Resources Project researcher Emily Sneff happened to spot this listing in a catalogue for the West Sussex Record Office: “Manuscript copy, on parchment, of the Declaration in Congress of the thirteen United States of America.”

Sneff and colleague Danielle Allen weren’t looking for another copy of the Declaration of Independence when they made this discovery. “We had no reason to expect a document like this to exist at all,” Sneff told The Washington Post.

But after copious research, Sneff and Allen realized that they had found another handwritten parchment copy, this one dating to the 1780s. Read more about where it may have come from and how it may have ended up in England in this report. 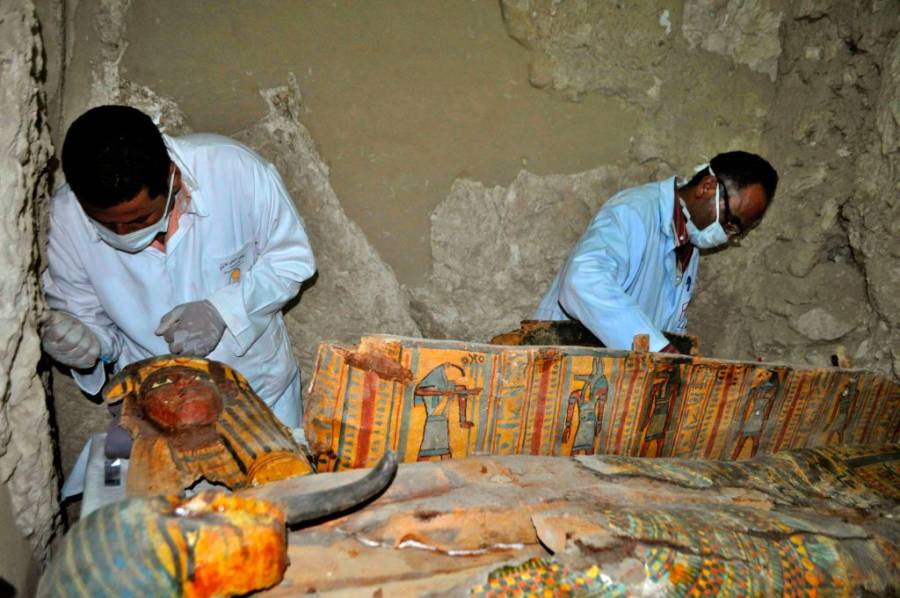 Stringer/AFP/Getty ImagesMembers of an Egyptian archaeological team work on a wooden coffin discovered in the 3,500-year-old tomb in the Draa Abul Nagaa necropolis, near the southern Egyptian city of Luxor, on April 18, 2017.

It’s hard to believe that after centuries of archaeological digs through Egypt, treasures remain hidden in the country’s vast and ancient burial grounds.

Yet just this week, researchers unearthed more than 1,000 statues, wooden masks, ten colorfully decorated sarcophagi and eight mummies in a necropolis near the Valley of the Kings.

The well-preserved items are thought to be more than 3,000 years old and were found in Luxor.

The tomb, which is believed to have been constructed for a judge in 1,500 to 1,000 B.C., was T-shaped. It featured an open courtyard leading to two halls and an inner chamber. One of the passages held four coffins and the other held six.

While J.R.R. Tolkien’s The Hobbit was most certainly a work of fiction, new research suggests that “hobbits” may have more in common with us humans than previously thought.

Indeed, researchers at the Australian National University have concluded that the 3.7-foot-tall Homo floresiensis — the scientific name of the “hobbit” species — shares more features with Homo habilis, the most ancient human ancestor, than it does Homo erectus, an early hominid distinct from the human species.

In order to arrive at such a conclusion, the researchers traveled the world to collect more than 100 ancient and modern human bone samples, making their study one of the most exhaustive of its kind to date. Upon inspection and statistical analysis, they found that the bone structures of Homo erectus and Homo floresiensis differed in several key ways, mainly in the jaw and pelvis.

Discover more about their findings in this report.