The Life And Death Of Thomas Sankara, The Revolutionary President Of Burkina Faso

Thomas Sankara was only president of Burkina Faso for four years, but he improved literacy, liberated women, and spoke out against imperialism before his assassination in 1987. 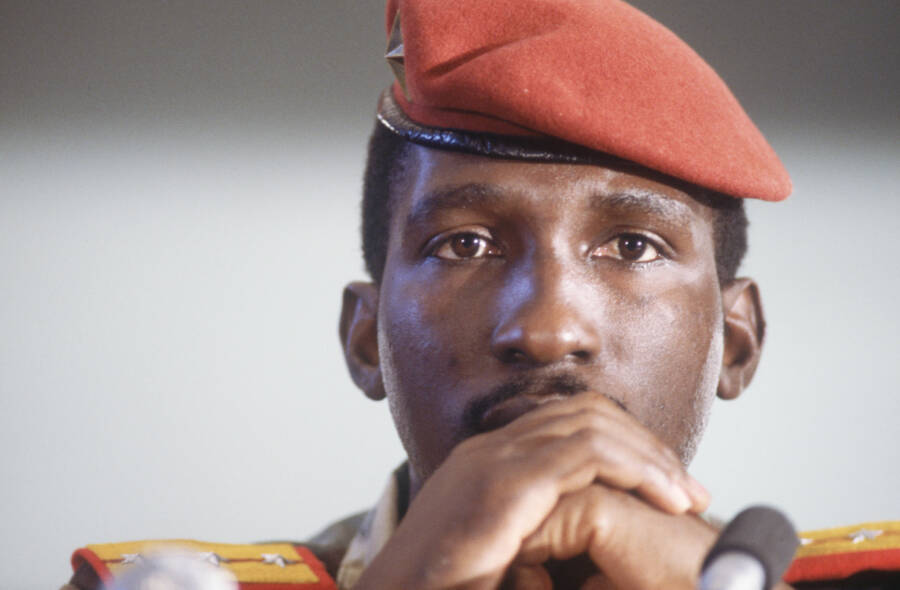 Patrick Durand/Sygma via Getty ImagesThomas Sankara in 1986, just a year before his assassination.

A surviving witness described the gunfire from Kalashnikov rifles as rain falling on a tin roof. Within a matter of minutes, Thomas Sankara, Burkina Faso’s young and charismatic president, was dead.

In power for just four years, Sankara had instituted wide-sweeping reforms that liberated women, improved literacy, and helped the environment. He’d even renamed the country, casting aside its French colonial name “Upper Volta” for “Burkina Faso” or “Land Of Upright People.”

But not everyone was happy with Sankara’s reforms. Some were threatened by Sankara’s anti-imperialist stance. Others found him at best eccentric — and at worst brutal and oppressive.

Though most lay blame for his assassination at the feet of his former friend, Blaise Compaoré, others wonder if France had a heavy hand in his death.

The Early Life Of A Future Revolutionary

Thomas Isidore Noël Sankara grew up in a rapidly changing world. Born on December 21, 1949, in the French colony of Upper Volta, he came of age as France’s power diminished. In 1960, Upper Volta shook off the shackles of colonialism and declared its independence.

Sankara had an independent spirit, too. Though his Roman Catholic parents hoped their son would become a priest, Sankara had other ideas. To his parents’ chagrin, Thomas Sankara set out to become a soldier, instead.

In the military, he absorbed new ideas about the world. He read about revolutionaries while living in France, and watched a revolution unfold in real-time in Madagascar. He even saw action in 1974 during a border clash with neighboring Mali, from which Sankara emerged as something of a hero.

All the while, Thomas Sankara had begun to develop his own ideas.

“A soldier without political education is but a criminal in power,” he mused while stationed in Madagascar. And following his role in the Mali conflict, Sankara wrote that he was “profoundly troubled” by the “unjust and useless fight.”

Unjust or not, Thomas Sankara emerged from the border conflict as a public figure — and his star rose as political instability racked the country. In 1983, the 33-year-old was tapped to be prime minister for the government of President Jean-Baptiste Ouédraogo, who’d seized power in a coup-d’etat the year before.

Sankara didn’t last long as prime minister. Bigger things were on the horizon.

As prime minister, Thomas Sankara frequently clashed with Jean-Baptiste Ouédraogo. The president was conservative and “Western-oriented“; Sankara was progressive and a staunch anti-imperialist.

By May 1983, Ouédraogo had had enough. He dismissed Sankara and threw him in jail. But Sankara’s friend and comrade Blaise Compaoré organized an August coup d’etat that removed Ouédraogo from power. From the ashes of that coup, Thomas Sankara became the new president of Upper Volta. 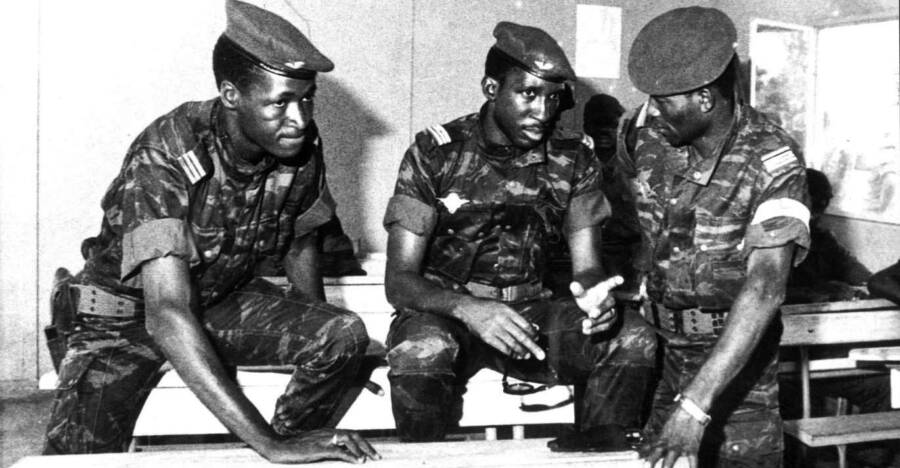 The purpose of the coup, Sankara told the people of Upper Volta two months later was “to eliminate imperialist domination and exploitation; and to purge the countryside of all the social, economic, and cultural obstacles that keep it in a backward state.”

Then, Thomas Sankara got to work.

Over the next four years, Sankara instituted a number of dramatic reforms that transformed the country — in some cases, literally. On the first anniversary of his presidency, he changed “Upper Volta” to “Burkina Faso,” which roughly translates to the “Land of Upright People” in two of the country’s indigenous languages.

Under his watch, 2.5 million children were vaccinated against diseases like meningitis and measles, literacy rates soared from 13 percent in 1983 to 73 percent in 1987 — thanks to newly free and compulsory education — and 10 million trees were planted to prevent desertification. 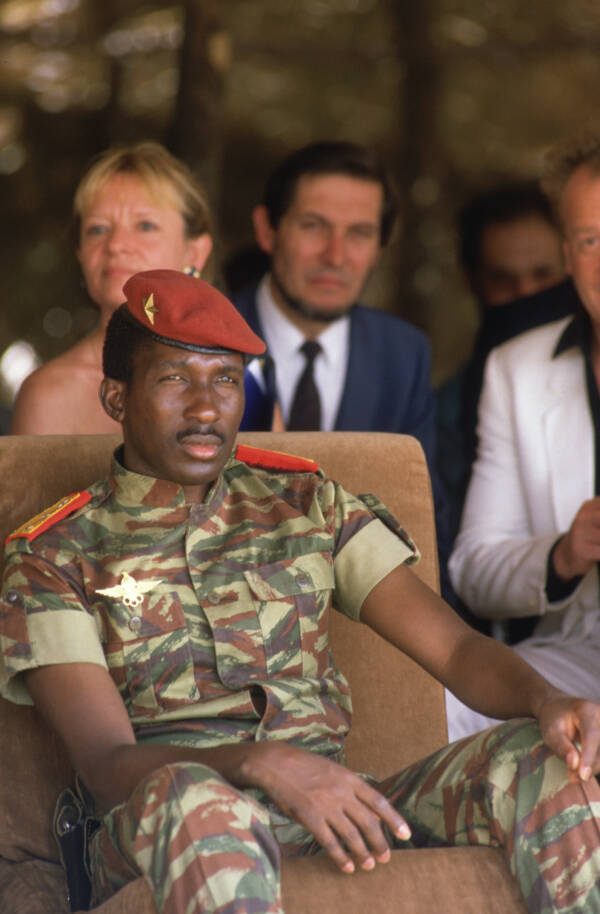 Alain Nogues/Sygma/Sygma via Getty ImagesPresident Thomas Sankara in 1986, one year before his assassination.

Burkina Faso’s new president embraced the new world order he wanted to build. Sankara reduced his salary to $450 a month. He replaced the governmental Mercedes with cheaper Renaults. The president even refused air conditioning in his office, as it was a luxury few could afford.

And on the world stage, he was forceful about Africa’s independence.

“We adopt as our own the affirmation of the Doctrine whereby Europeans must not intervene in American affairs,” Sankara thundered to the U.N. in 1984. “Just as Monroe proclaimed “America to the Americans” in 1823, we echo this today by saying “Africa to the Africans,” “Burkina to the Burkinabè.”

To his fellow citizens, he warned “he who feeds you, controls you” and pushed for Burkina Faso to be self-sufficient, inspiring countless people with his bold stance.

Why Resistance Against Sankara Began To Take Shape

However, not everyone admired the ambitious young president. Feudal lords resented that he’d redistributed their lands. Whispers spread that Sankara’s opponents were tortured. And some despised Sankara’s stranger orders, like that government employees wear clothing made from local cotton.

Plus, world powers like the United States watched with displeasure as Sankara strengthened ties with Libya’s Muammar Gaddafi and Cuba’s Fidel Castro. Sankara even wore a mother-of-pearl pistol at his hip gifted to him by North Korea’s Kim Il Sung.

By 1987, Thomas Sankara had made plenty of enemies. And one of them was his old friend, Blaise Compaoré. 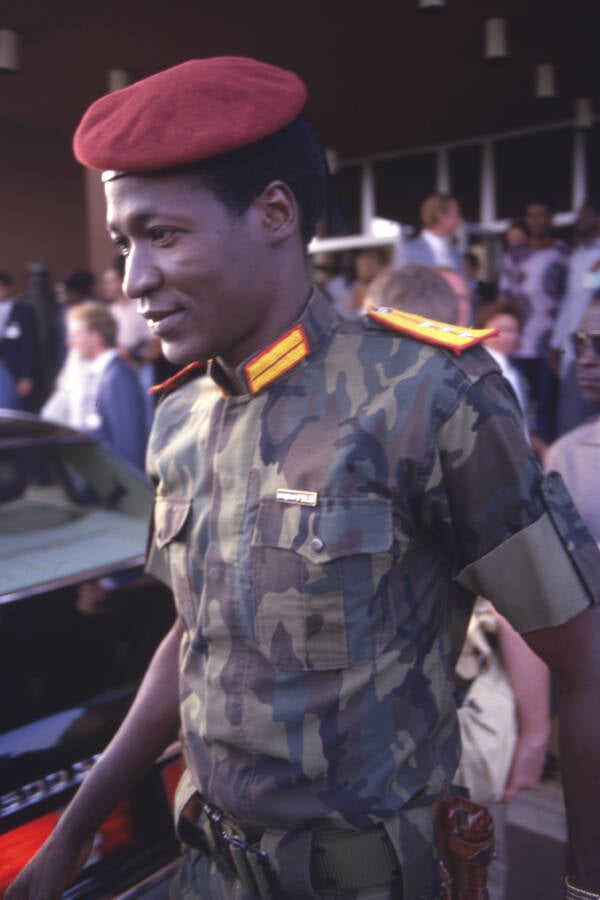 Patrick AVENTURIER/Gamma-Rapho via Getty ImagesBlaise Compaoré in 1986, a year before he allegedly orchestrated a coup that killed Thomas Sankara.

As Compaoré tells it, a group of men loyal to him heard that Sankara planned to kill him. So, they struck first. On Oct. 15, 1987, they ambushed Sankara on his way to a government meeting.

A western diplomat who spoke to one of Sankara’s surviving bodyguards described the assassination:

“[Sankara] raised his hands and said: ‘Take me. I’m the one you want.’ Compaoré’s men sprayed him with Kalashnikov fire and then finished him off with a grenade.”

After burying Sankara and his men in an unmarked grave, Blaise Compaoré assumed the presidency. He held power in Burkina Faso until he was forced to resign in 2014 following popular protests.

But the story of Thomas Sankara doesn’t quite end there.

Today, Thomas Sankara is seen as a hero in Burkina Faso. His face adorns stickers and t-shirts, and there’s even a large statue of him in the country’s capital, Ouagadougou. 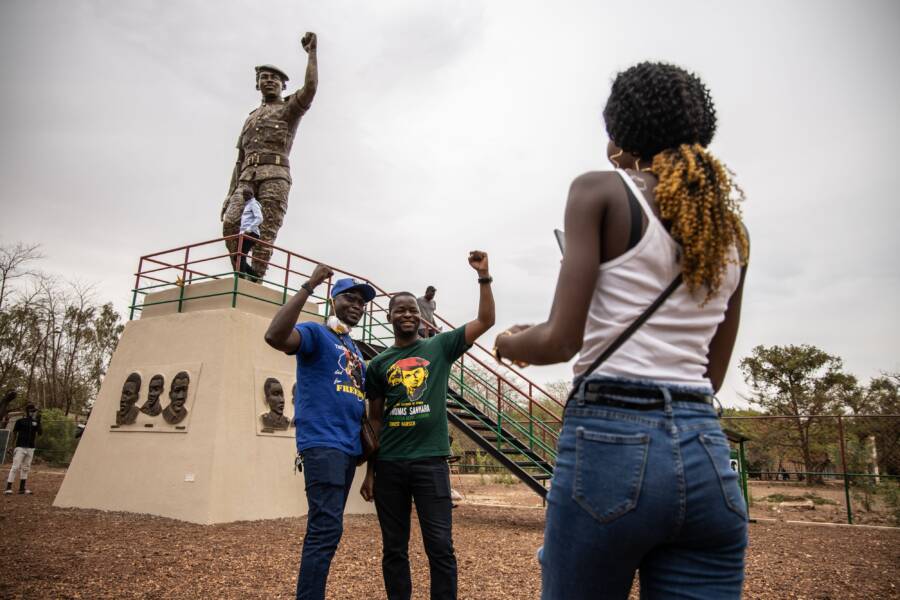 Olympia de Maismont/AFP via Getty ImagesTwo men pose in front of the Thomas Sankara statue in 2020.

But questions remain about his death. Though Compaoré always denied explicitly ordering Sankara’s assassination, he and 13 other men are currently on trial for his death. (Compaoré, living in exile in the Ivory Coast, is being tried in absentia.)

“We have been waiting for this moment,” said Mariam Sankara, Thomas Sankara’s widow. Though she’s convinced that Compaoré orchestrated her husband’s death, Mariam thinks he had help from France.

Indeed, France has long faced such allegations. And the French president, Emmanuel Macron, even agreed to send a number of declassified files to Burkina Faso for review in 2017. However, he did not send any from François Mitterand, whose presidency overlapped with Sankara’s.

Though his life and his presidency were cut short, Thomas Sankara’s legacy remains compelling to many living in Burkina Faso today. Sankara himself understood that, noting a week before he died: “While revolutionaries as individuals can be murdered, you cannot kill ideas.”

After reading about the life and death of Thomas Sankara, discover the story of Patrice Lumumba, another young African leader who died by assassination. Or, learn how the Ashanti Empire became one of the most powerful kingdoms in pre-colonial Africa.