The day after the Tiananmen Square massacre, a lone protestor starred down a column of Chinese tanks in Beijing. His identity remains unknown, but the world knows him as the "Tank Man."

On June 5, 1989, one day after the Tiananmen Square massacre destroyed the spirits of many of the protesters who had gathered there, an unidentified man in Beijing stood defiantly in front of a row of military tanks sent by the Chinese government.

The unbelievable confrontation was captured on film and thus immortalized. As for the courageous protester who was never concretely identified, he has simply become known as “Tank Man” or the “Unknown Rebel.”

And the image of the man — alone and unarmed before a row of threatening military vehicles — has since evolved into a larger symbol of dissent and courage that persists to this day. 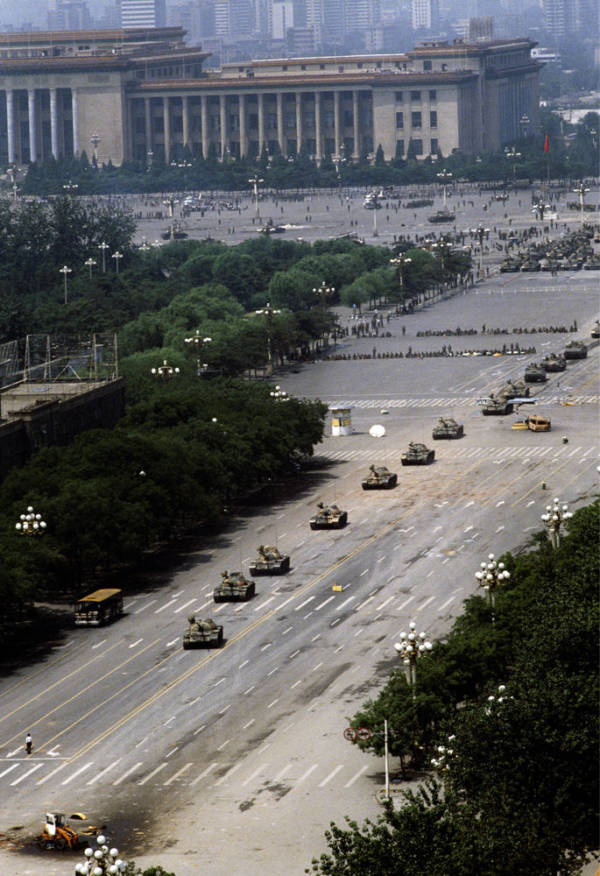 Stuart Franklin via WikimediaChinese tanks advance toward Tiananmen Square moments before their encounter with the Tank Man.

By April of 1989, civil unrest in China was close to a breaking point. Hu Yaobang, a general secretary in the ruling Chinese Communist Party (CCP) who was also a staunch supporter of democratic reforms within the notoriously corrupt government, had just died. His death cemented him as a martyr for thousands of pro-democracy civilians and students across China who protested the communist government’s oppressive regime, and in his wake, huge student protests broke out at Beijing’s Tiananmen Square.

In response to these protests, the government implemented martial law in Beijing to quell the disturbance.

The protests at Tiananmen Square escalated on June 4 when troops arrived to establish control over the students. Protesters were allegedly given a warning to vacate the square within the next 24 hours, but many decided to stay and continue their demonstration peacefully. Suddenly, soldiers began to attack the peaceful protesters with batons, gunfire, and even tanks, which were used to crush some of the demonstrators. 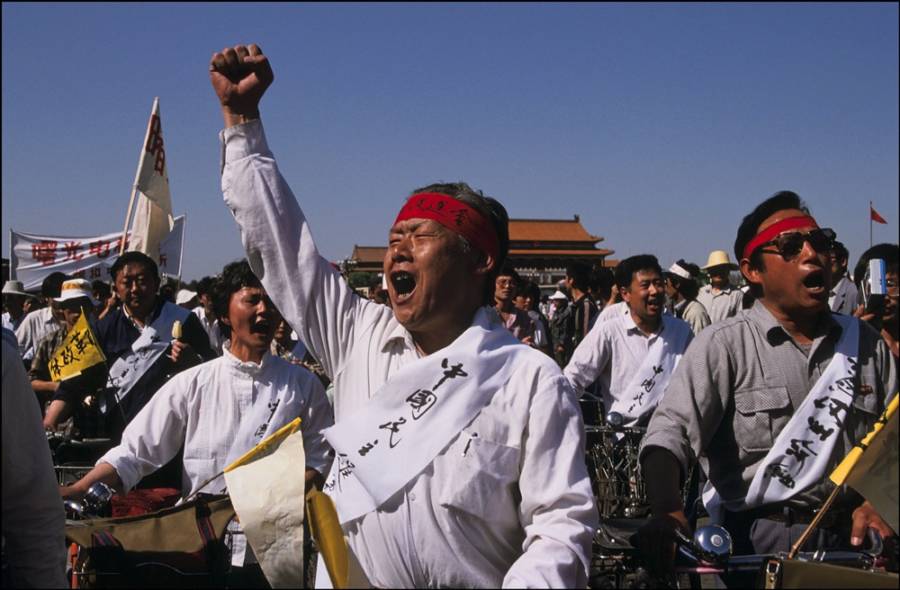 The violence was ugly, to say the least. It is difficult to state exactly how many were killed, injured, or detained because China has since gone to extreme efforts to censor all information related to the crackdown at Tiananmen Square, but United Press International reported in the days following the massacre that there were 300 deaths — including 100 soldiers. But this tally was later lowered to 200. According to the Chinese Red Cross at that time, there were an estimated 2,600 deaths, but this number was also later withdrawn.

A diplomatic cable from the British Ambassador to China, declassified in 2017, estimated that at least 10,000 were killed at the protests between June 3 and 4.

Following the chaos, the CCP arrested and imprisoned thousands of protesters in Tiananmen Square and even executed some of them. Although some voices refuse to be restrained or censored by the government, the memory of the tragedy at Tiananmen Square lives on — especially in the image of the Tank Man. 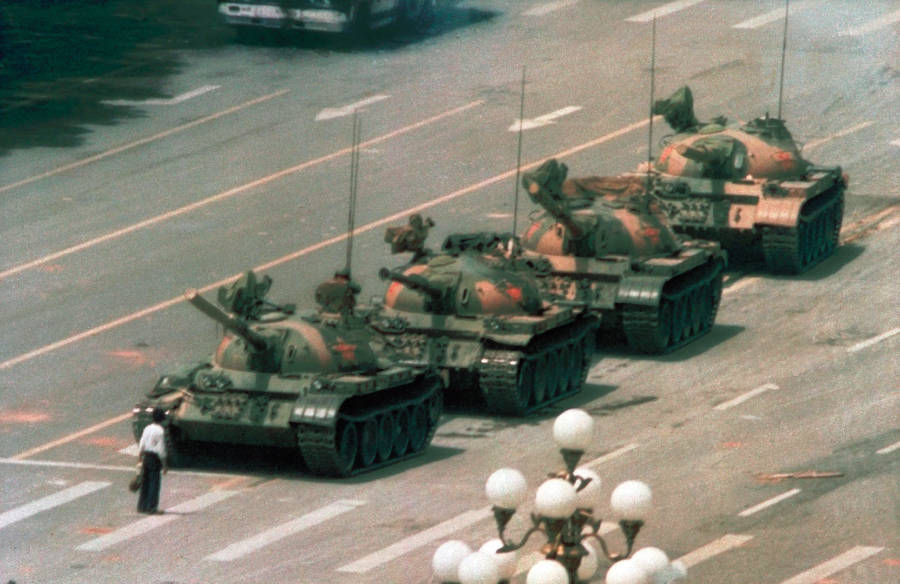 Wikimedia CommonsThis photograph of “Tank Man” has encapsulated for many the spirit of the protests at Tiananmen Square.

There are many harrowing images of the brutality on display at the Tiananmen Square massacre, but one scene from the protests stands out above the rest.

On June 5, a day after the bloody clash between Chinese troops and protesters, an unbelievable encounter occurred. As a row of Chinese military tanks began to line the streets, an unidentified protester, only known now as Tank Man, walked into the middle of the vehicles’ path.

The man was unarmed and appeared to be carrying a briefcase and a white plastic bag. Once the moving tanks reached a complete stop in front of him, the Tank Man waved his right hand as if to tell the vehicles to turn back. The tanks did at one point attempt to move around the man but he merely moved to continue blocking their path. He even climbed atop one tank to speak with a soldier within, but then the man was forcibly removed by two other soldiers.

The highly dangerous exchange went on for several minutes and was captured by five different journalists, but it was the image captured by photographer Jeff Widener that became the most famous.

Widener had been called up to Beijing by the Associated Press to photograph the massive protests at Tiananmen Square. It was his first time on an assignment involving violence and he was nervous about what to expect. His fears were quickly justified; after getting caught in the kerfuffle between soldiers and protesters, he suffered a blow to the head from a rock while taking photographs.

He went back to the AP office to recuperate and almost talked himself out of going back to shoot more photos. What he saw had horrified him: burning cars, students with guns, a dead soldier, and a man lit on fire. To top it off, he also had the flu and one of his cameras had broken.

“I was shutting down,” Widener said in an interview with the Observer. “I had the feeling if I went back I’d die.”

But the next day, he was back out there again. The bureau wanted images of the army’s occupation of the square, so Widener rode a bicycle to the Beijing Hotel where he could get a good vantage point from one of the balconies. Of course, he needed access to the rooms.

Video of the Tiananmen Square Tank Man protester confronting the row of tanks.

Luckily, he spotted an American exchange student named Kirk Martsen and asked him to let him use his balcony. The student agreed, but by the time they got to the room, Widener realized there was one problem: he was out of film. The “cardinal rule” he had broken was the first hurdle, but he finally managed to get a fresh roll.

When the noise of tanks caught his ear, Widener looked out and saw the line of military vehicles driving toward the square. Then, he saw the Tank Man.

For a split second, Widener left the balcony to switch his camera lens with one that could produce a better long-distance shot. He managed to snap three quick photos before people came and took the solo protester away.

“I noticed there was a problem with my camera. It was too slow a shutter speed,” he told NTD. “I thought, ‘Oh my God, I lost the picture.’ But miraculously, one picture came out, and that went to the rest of the world.”

To this day, the identity of the man who stood up to the Chinese tanks has remained unknown, but Widener believes that the Chinese government knows. The photojournalist has since gone on to cover similar stories all over the world but his photo of Tiananmen’s heroic Tank Man has stayed with him through the years.

“I live with [that photo] every day,” he said. The photograph of “Tank Man” and his defiance against the Chinese regime’s oppression and violence is still heralded as a powerful representation of the people’s movement — so much so that TIME named it as one of the most influential images of all time. 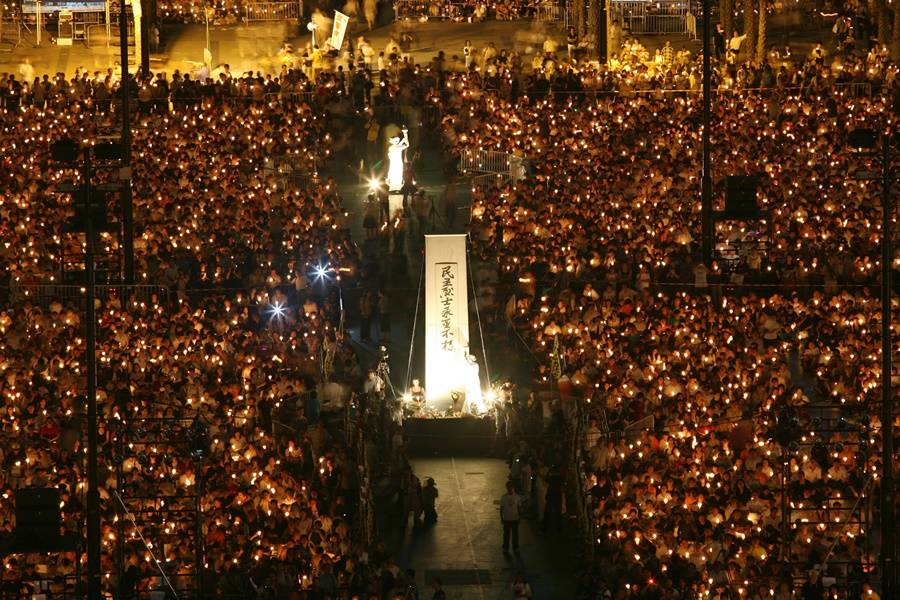 Even long after the tragedy, the Communist Party of China still forbids discussion of the Tiananmen Square protests. All media — including books, art, and films — concerning the incident is banned. Those who dare to speak of or mention the atrocity are censored and punished.

The Chinese government has never issued an apology to the victims’ families either as if the killings that occurred had never happened.

But everyone who was there certainly remembers the truth. Over the years, there has been a growing number of Chinese dissidents whose mission is to speak out against the Chinese government’s hand in the bloody massacre of peaceful protesters and ensure that those who died that day are not forgotten.

Recently, 66-year-old military veteran Jiang Lin spoke out about the gruesome violence she saw and experienced first-hand after she left China. Refusing to follow orders to detain protesters, she swapped her military uniform for civilian clothing and headed to the square.

The uncontrollable violence left both physical and emotional wounds on Jiang.

“It felt like watching my own mother being raped,” she told The New York Times. “It was unbearable.”

The image of Tiananmen Square’s Tank Man has remained a spark that ignites the will of others to make their voices heard. The desire to dissent against the Chinese government is particularly common among Chinese artists, many of whom have fled the country so that they can express themselves more freely.

Taiwanese artist Shake wants people to remember that day through the artwork she does. Her recent masterpiece was a remaking of the Tiananmen Square Tank Man encounter using giant inflatable balloons.

“A lot of people see their trials and tribulations in life summed up in this man,” Widener said of his most famous subject’s legacy. “I think Tank Man represents everyone’s challenge in life.”

After this look at the legendary Tiananmen Square Tank Man, check out the untold story of Witold Pilecki, the man who voluntarily entered Auschwitz to first expose its horrors to the world. Then see if you can endure these 33 photos from the My Lai massacre, the war crime the United States got away with.