When Jiang Lin saw the Chinese army murder unarmed civilians, her entire life changed. With the 30th anniversary of the Tiananmen Square massacre rearing its head, she's decided to speak out. 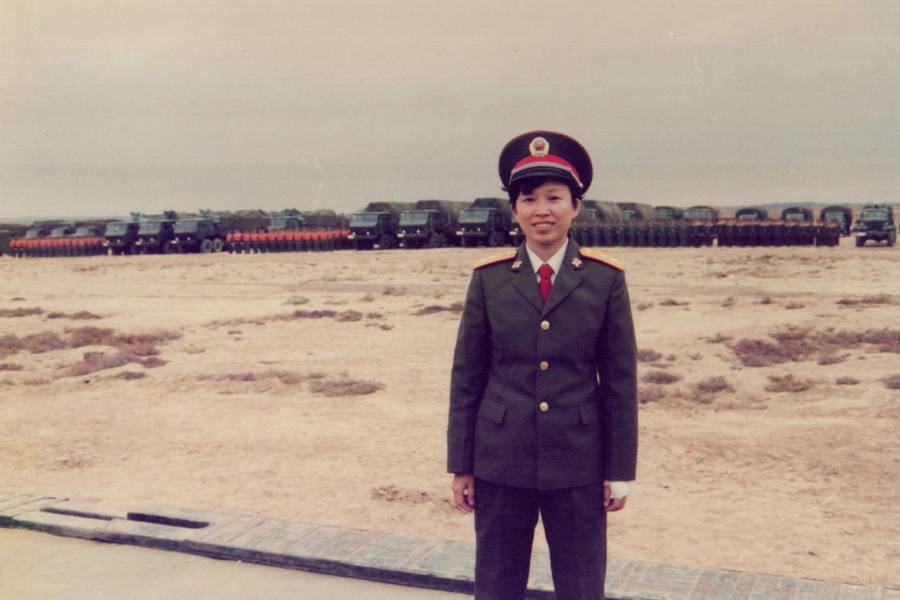 Jiang Lin during a military training exercise in China’s Ningxia region in October, 1988.

A former Chinese military insider has broken 30 years of silence surrounding the secret military resistance to the Tiananmen Square massacre in 1989.

The 1989 pro-democracy protests in Tiananmen Square were the first time millions of international bystanders paid attention to China’s political landscape. The government responded to student-led marches and hunger strikes with martial law and tanks, and the world looked on in horror.

For those on the ground, the crackdown was traumatic — and often deadly. When the Chinese Army flooded Beijing to crush these political dissidents on June 4, 1989, bullets flew, bodies fell, and pools of innocent blood covered the streets.

With China’s modern-day state of censorship, tech-infused squashing of dissent, and retribution against opposition an everyday occurrence, citizens yearning for political change are often afraid to speak out. Better to stay invisible, not jeopardize one’s financial standing or personal wellbeing, and remain a participant in society. 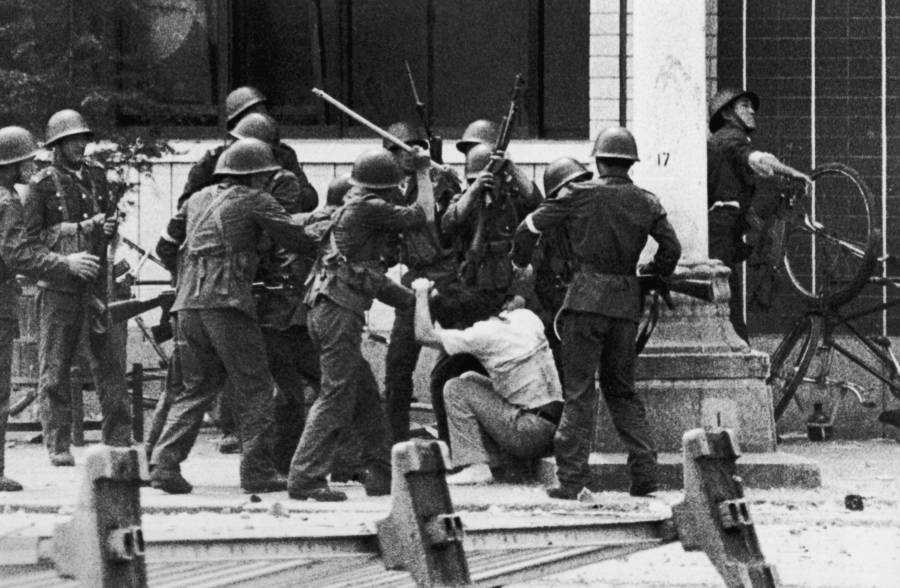 Jiang Lin, a lieutenant and military journalist in the People’s Liberation Army at the time, had a front row seat to both sides of the massacre. According to The New York Times, she saw China’s youth rebelling in the hopes of instilling permanent change on one hand. On the other, she and many of her fellow military officials urged their army against violent recourse — and failed.

For the first time in her life, the 66-year-old was ready to tell the world what she did, what she saw, and how it’s felt to live so long without speaking out.

“The pain has eaten at me for 30 years,” said Jiang. “Everyone who took part must speak up about what they know happened. That’s our duty to the dead, the survivors and the children of the future.” 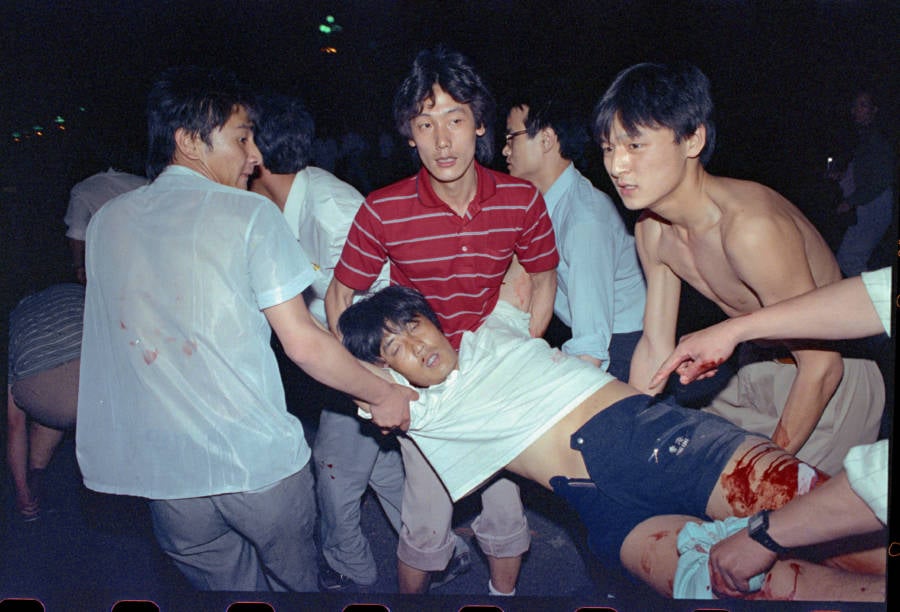 David Turnley/Corbis/VCG via Getty ImagesDemonstrators transport a wounded man during the military crackdown in Tiananmen Square on June 4, 1989.

Jiang explained that a big part of her motivation stemmed from generations of Chinese Communist Party leaders adamantly opposing tending to this psychic wound in the nation’s history.

The Communist Party of China forbids discussion of the Tiananmen Square protests and has banned or censored countless books, films, and other media that discuss them. The government has never apologized to the families of those it killed, and it’s never issued an official death tally to a nation forced to mourn in silence.

There were good people on the authoritarian front — but their voices were tuned out. Eventually, all hell broke loose, and Jiang saw how soldiers indiscriminately fired at innocent students merely because they were ordered to do so. 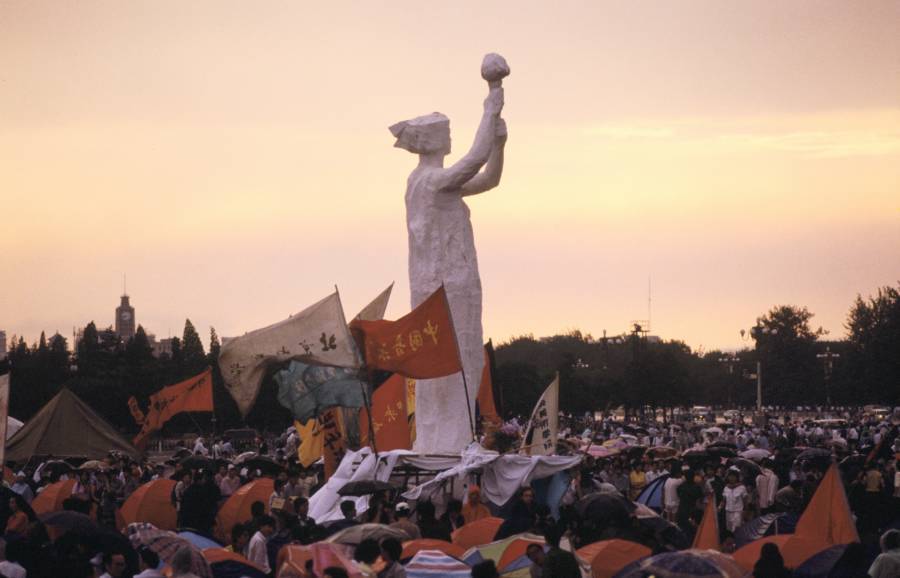 Eric BOUVET/Gamma-Rapho/Getty ImagesProtesters surround the “Goddess of Democracy,” a statue made in the style of the Statue of Liberty to represent their desire for a more democratic government in Communist China. June 1, 1989.

While previous research has already confirmed that there was a notable portion of senior commanders opposed to military force, Jiang’s testimony has expounded on the extent of that matter. According to her, General Xu Qinxian who led the 38th Group Army, refused to engage in the Tiananmen Square crackdown.

Seven commanders signed a joint letter opposing martial law, while Qinxian checked himself into a hospital to remove himself from the fiasco.

“It was a very simple message,” said Jiang of the letter. “The People’s Liberation Army is the people’s military and it should not enter the city or fire on civilians.”

Jiang read the letter over the phone to an editor at People’s Daily, the Communist Party’s primary publication, where staff refused to censor news about the protests. It was never published. One of the seven generals objected, as he never wanted his name to be made public.

Jiang hoped that these internal squabbles would suffice to get leadership to reconsider. But troops advanced on June 3 and began killing unarmed citizens. Their orders were to clear the square by June 4, using any means necessary. Citizens were told to stay indoors. 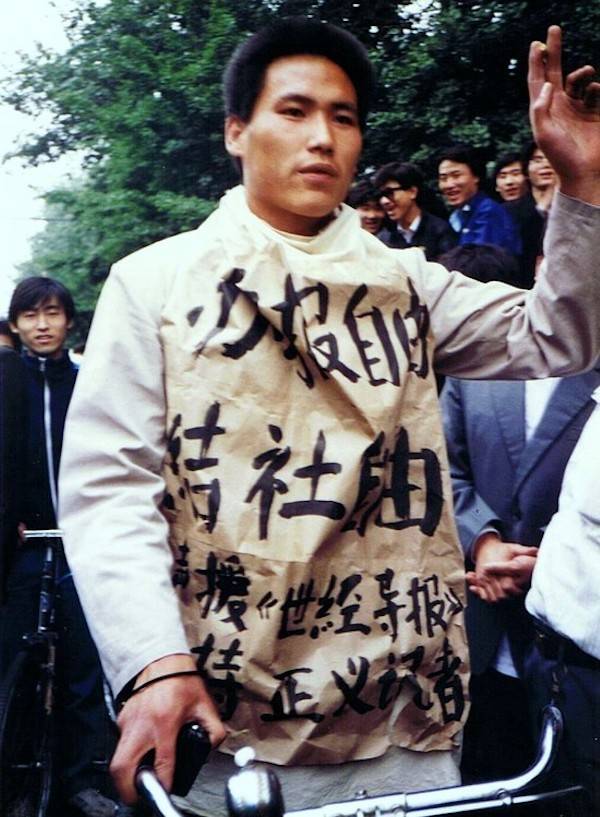 Wikimedia CommonsPu Zhiqiang, a student protester at Tiananmen, on May 10, 1989. His shirt reads,”We want freedom of newspapers, freedom of associations, also to support the ‘World Economic Herald,’ and support those just journalists.” Pu is now a civil rights lawyer in Beijing.

She headed into the city on her bicycle to witness the developments with her own eyes. She knew this was a poignant, peerless day in China’s history. Though she knew could be mistaken for a protester and killed, she purposefully dressed in civilian clothes.

She didn’t want to be identified with the military that day.

“This was my responsibility,” Jiang said. As a military reporter, “my job was to report major breaking news.”

That day, she dodged hails of gunfire, explosions, and heat from burning buses. She stayed close to the ground when she needed to. Armed police officers beat her with electric prods. Her head opened up, blood gushing onto the pavement.

Still, she refused to show anyone her military ID to avoid the army’s violence.

“I’m not a member of the Liberation Army today,” was her mantra. “I’m one of the ordinary civilians.”

Her injury left a permanent scar and recurring headaches. She was interrogated for months after that day. Her private memoir led to two investigations. Tiananmen was, by all accounts, the worst thing she’s experienced in her life — as a heartbreaking shift in her country, and an experience of shocking authoritarianism.

“It felt like watching my own mother being raped,” she said. “It was unbearable.” 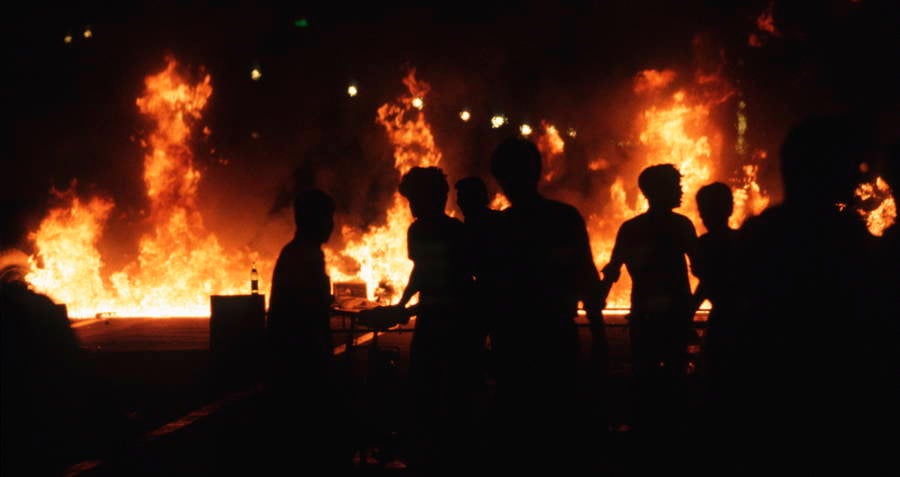 Jiang joins a seemingly growing faction of Chinese citizens that are coming out of the woodwork, fed up with the government’s denial of the Tiananmen Square massacre. Most recently, a photographer attending the 1989 protests published his work — only after moving to the United States, of course.

For Jiang, however, the situation to speak up is distinct. As an army veteran, as well as the daughter of an elite general raised on military bases her entire life, her outspoken criticism is undoubtedly seen as a betrayal of the state. Some likely consider her stance treasonous.

But Jiang enlisted in the People’s Liberation Army with pride and honor as a news reporter. In photos of her as a teen, she’s seen smiling in her green uniform, confident she’s part of the right side of history. She said she never thought the army was capable of pointing its guns at her unarmed countrymen.

“How could fate suddenly turn so that you could use tanks and machine guns against ordinary people?” Jiang asked. “To me, it was madness.” 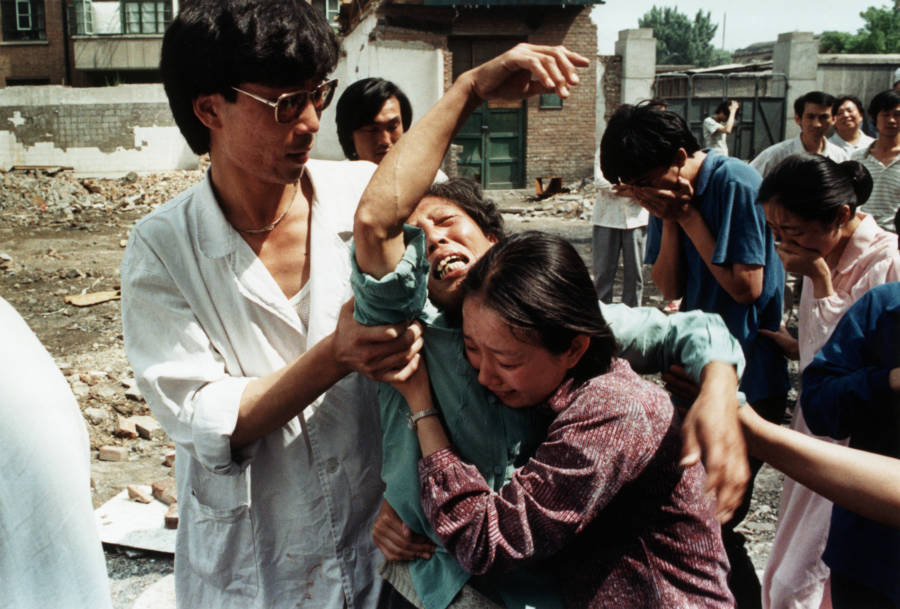 David Turnley/Corbis/VCG via Getty ImagesFamily members try to comfort a grief-stricken mother who has just learned of the death of her son, a student protester killed by soldiers. Tiananmen Square. June 4, 1989.

Jiang left the military in 1996 and has since lived a quiet life. She’s waited all this time for a political hero to come along, if only to apologize on behalf of the state. But that hasn’t happened. So, in her eyes, she had to speak out and let the chips fall where they may.

“All this is built on sand,” she said. “There’s no solid foundation. If you can deny that people were killed, any lie is possible.”

After learning about the former Chinese lieutenant who decided to speak out against the government’s refusal to acknowledge the Tiananmen Square massacre, read about Taiwan marking 30 years since Tiananmen Square with an inflatable balloon ‘tank man.’ Then, learn about the Chinese cancer villages showing the high human cost of industrialization.